FILE PHOTO: In this Nov. 1, 2017, file photo, Houston Astros manager A.J. Hinch holds the championship trophy after Game 7 of baseball's World Series against the Los Angeles Dodgers, in Los Angeles. Houston manager AJ Hinch and general manager Jeff Luhnow were suspended for the entire season Monday, Jan. 13, 2020, and the team was fined $5 million for sign-stealing by the team in 2017 and 2018 season. Commissioner Rob Manfred announced the discipline and strongly hinted that current Boston manager Alex Cora — the Astros bench coach in 2017 — will face punishment later. Manfred said Cora developed the sign-stealing system used by the Astros.

Evidence shows Astros' players and staff would use camera footage from center field to decode signs from the opposing team about what pitches were coming.

(Houston) — The owner of the Houston Astros announced Monday that he is dismissing the baseball team’s general manager, Jeff Luhnow, and manager, A.J. Hinch, over an elaborate sign-stealing scheme during the 2017 and 2018 seasons.

Shortly before owner Jim Crane’s announcement, Major League Baseball Commissioner Robert Manfred had said the league was suspending Luhnow and Hinch for the 2020 season without pay.

“Today is a very difficult day for the Houston Astros,” Crane said at a news conference at Houston’s Minute Maid Park. “We accept the decisions and findings and penalties.”

He said dismissing Luhnow and Hinch was “going above and beyond the MLB’s penalty,” adding that “we need to move forward with a clean slate.”

The league also ordered the Astros to pay a fine of $5 million — the highest amount allowable under league rules. And the team will forfeit its first- and second-round selections in the 2020 and 2021 player drafts.

An MLB investigation found that Crane was not aware of the team’s rules violations. 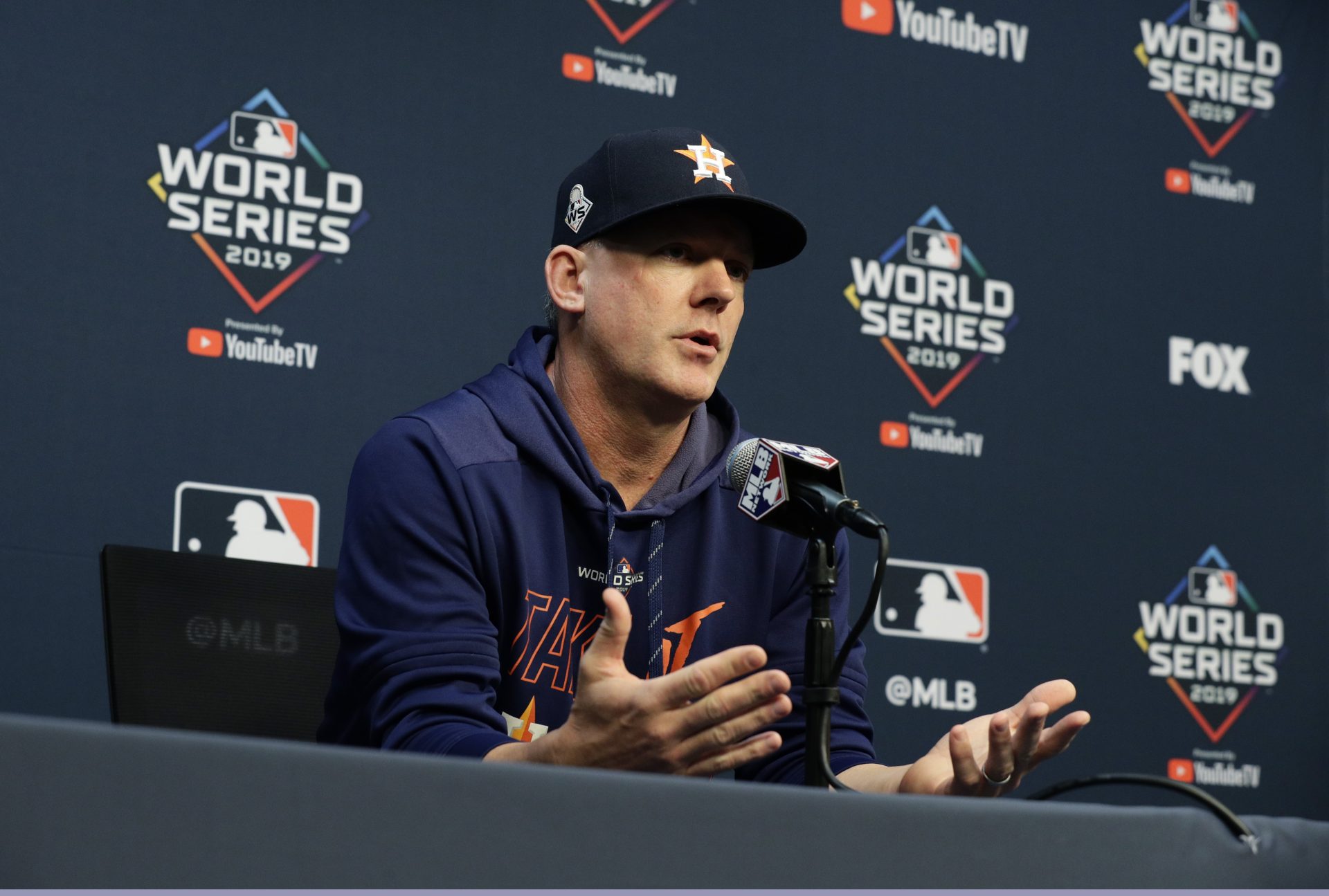 FILE PHOTO: In this Oct. 28, 2019, file photo, Houston Astros manager AJ Hinch talks to the media during a news conference for baseball’s World Series, in Houston. Houston manager AJ Hinch and general manager Jeff Luhnow were suspended for the entire season Monday, Jan. 13, 2020, and the team was fined $5 million for sign-stealing by the team in 2017 and 2018 season. Commissioner Rob Manfred announced the discipline and strongly hinted that current Boston manager Alex Cora — the Astros bench coach in 2017 — will face punishment later. Manfred said Cora developed the sign-stealing system used by the Astros.

The team used several methods to steal signs, according to the commissioner’s statement. In perhaps the most most brazen example, several months into the 2017 season, the players and staff involved would use camera footage from center field to decode signs from the opposing team about what pitches were coming. Then, according Manfred, “a player would bang a nearby trash can with a bat to communicate the upcoming pitch type to the batter.”

It wasn’t particularly hidden. “Witnesses made clear that everyone proximate to the Astros’ dugout presumptively heard or saw the banging,” Manfred said.

The Astros won the World Series in 2017, beating the Los Angeles Dodgers. They continued to decode signs during that post-season, Manfred added, even as his office was stressing that sign-stealing would be taken “extremely seriously.”

Investigators did not find that the team continued the banging scheme into the 2018 season. “However, the Astros’ replay review room staff continued, at least for part of the 2018 season, to decode signs using the live center field camera feed, and to transmit the signs to the dugout through in-person communications,” Manfred said. The investigation found that at some point during the 2018, they stopped “using the replay review room to decode signs because the players no longer believed it was effective.”

The Astros’ former bench coach, Alex Cora, was involved in developing the banging scheme and setting up the electronic surveillance, according to the investigation. Cora now manages the Boston Red Sox. He remains under investigation for that team’s alleged sign-stealing in 2018 under his leadership.

Manfred said the banging method was planned and executed by Cora and players. Using the center field camera to decode signs was “originated by lower-level baseball operations employees working in conjunction with Astros players and Cora.”

While the investigation said that “most of the position players on the 2017 team” participated in the scheme, Crane said no players will be suspended.

It’s worth noting that Manfred said the cheating was not planned or directed by the team’s top baseball officials such as Luhnow and Hinch. But he added that he believes the rule violations are attributable “to a failure by the leaders of the baseball operations department and the Field Manager to adequately manage the employees under their supervision, to establish a culture in which adherence to the rules is ingrained in the fabric of the organization, and to stop bad behavior as soon as it occurred.”

The scheme was first described by reporters Ken Rosenthal and Evan Drellich in The Athletic.

The team also came under scrutiny recently for a different scandal. As NPR’s David Folkenflik reported, the team’s assistant general manager Brandon Taubman launched into a profane and aggressive defense of pitcher Roberto Osuna, who has been accused of domestic violence, to a group of female reporters. He appeared to direct the rant to a reporter wearing a purple wristband signaling domestic violence awareness. The team fired Taubman several days later.