A white-tailed deer emerges from the brush. The Lower Rio Grande Valley National Wildlife Refuge has some of the richest biological diversity in North America--with 1,200 plants, 300 butterflies, and 700 vertebrates, of which 520 are birds. A white-tailed deer emerges from the brush. The Lower Rio Grande Valley National Wildlife Refuge has some of the richest biological diversity in North America--with 1,200 plants, 300 butterflies, and 700 vertebrates, of which 520 are birds.

Over the past 41 years, the U.S. Fish and Wildlife Service has been buying up land on the lower Texas-Mexico border to protect one of the most biologically diverse regions in North America from developers and farmers.

But the Rio Grande Valley of Texas is a hotspot for illegal immigration and drug smuggling, as well as biodiversity. That’s why the Trump administration is planning to build 110 miles of border wall through the valley (which is actually a river delta).

Pieces of that wall will go directly through the Lower Rio Grande Valley National Wildlife Refuge because it is land already owned by the federal government. Elsewhere on the Texas border, construction of the president’s wall is being slowed by difficulties acquiring private land. It can take months or years to take private property through eminent domain.

“It’s a tragic situation,” said Caroline Brouwer, vice president for government affairs at the National Wildlife Refuge Association, a Washington-based nonprofit that advocates for the nation’s often overlooked refuge system. “Fish and Wildlife staff have worked on this issue for decades and decades. And it’s being torn down in front of our eyes.”

“A string of pearls”

Back in 1979, the idea was to save a strip of native habitat along the Rio Grande, known as Tamaulipan thornscrub in the rapidly urbanizing valley. U.S. Fish and Wildlife Service began to buy up pieces of land and assemble what they called “a string of pearls.” 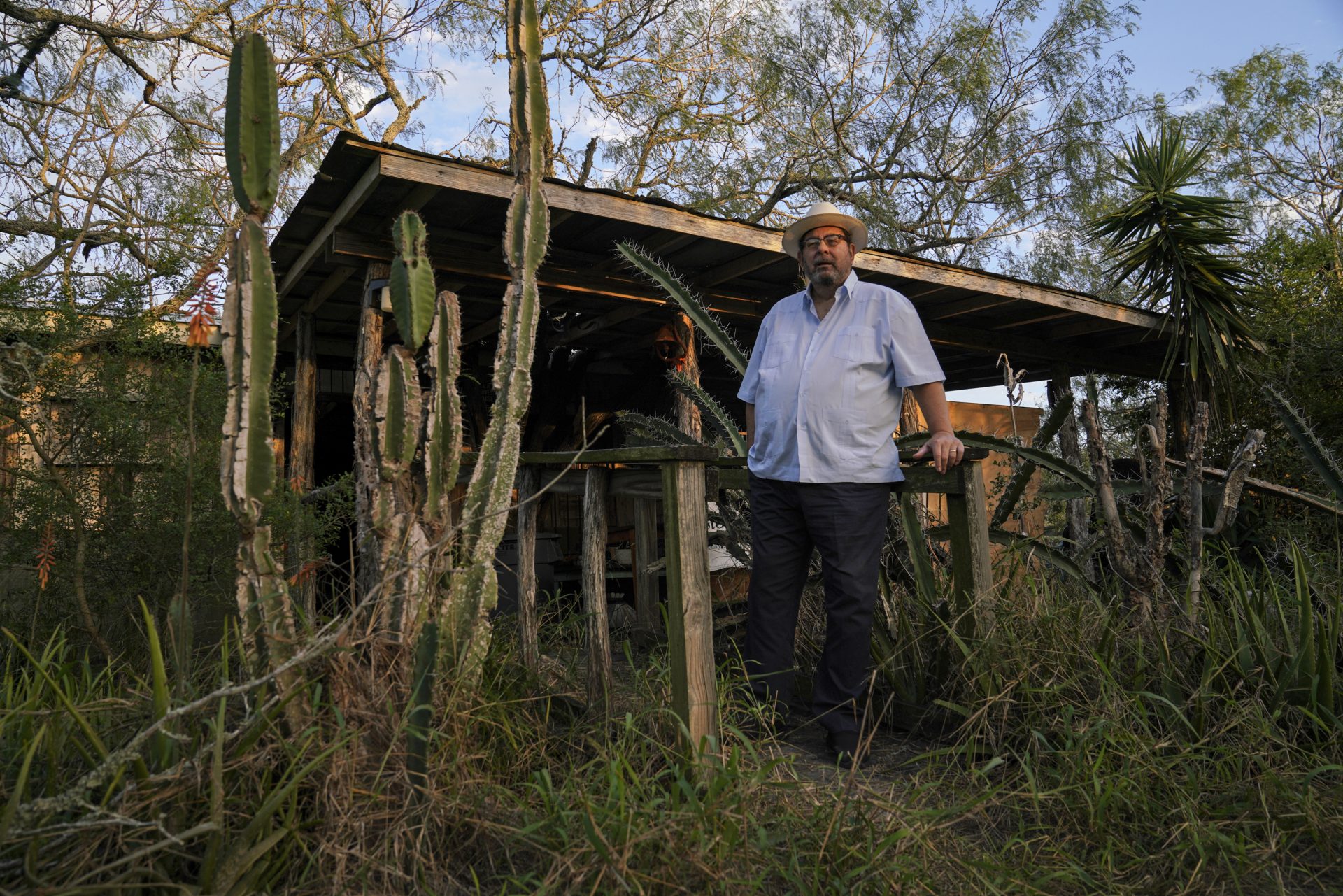 Tony Zavaleta stands at his historic ranch east of Brownsville, Texas, where he says a wildlife refuge next door has helped the deer population. He’s even spotted a cougar.

Today, the agency owns 135 individual tracts comprising nearly 105,000 acres, stretching along the last 275 river miles from Falcón Dam to the Gulf of Mexico. Fish & Wildlife has spent about $82 million and the refuge network is still growing. Under congressional authorization, the Lower Rio Grande Valley National Wildlife Refuge will ultimately have 132,500 acres.

It did take time for some folks in the area to embrace the concept.

“When they first started buying up land I was very upset, didn’t believe it could work, didn’t want the federal government to be my neighbor,” says Tony Zavaleta, a retired anthropologist with the University of Texas Rio Grande Valley. His extended family has owned property on the serpentine river since South Texas was part of New Spain. From the deck of his rustic cabin, Zavaleta has watched a rare mountain lion prowl his property. Now he’s a believer.

Snake skin (left) and animal footprints are seen on Zavaleta’s ranch. Wildlife conservationists are wondering how much of an obstruction the barrier will be to animals that range along the river.

Fish and Wildlife told NPR that the border wall may impact 8,839 acres of native habitat on 30 separate tracts of its land. Wildlife conservationists are wondering how much of an obstruction the barrier will be to animals that range along the river.

Filling in the gaps

Betty Perez runs a family ranch north of the town of La Joya and is past president of the Friends of the Wildlife Corridor, a private group adamantly opposed to the border wall. As soon as President Trump announced his big, beautiful wall was coming, she knew the government would be looking for acreage it already owned.

“The Fish and Wildlife land is what’s been targeted first because it’s easy. It’s the first thing you can get to without having to worry about the process of buying land from people,” she says, pausing while rolling out a round hay bale for her mama cows.

Perez helps sustain the wildlife refuges by raising native plants such as yucca, catclaw acacia and wolfberry that she sells to Fish and Wildlife. The agency uses the plants to revegetate farmland and turn it back into natural terrain.

Wildlife defenders have fought the border barrier before. 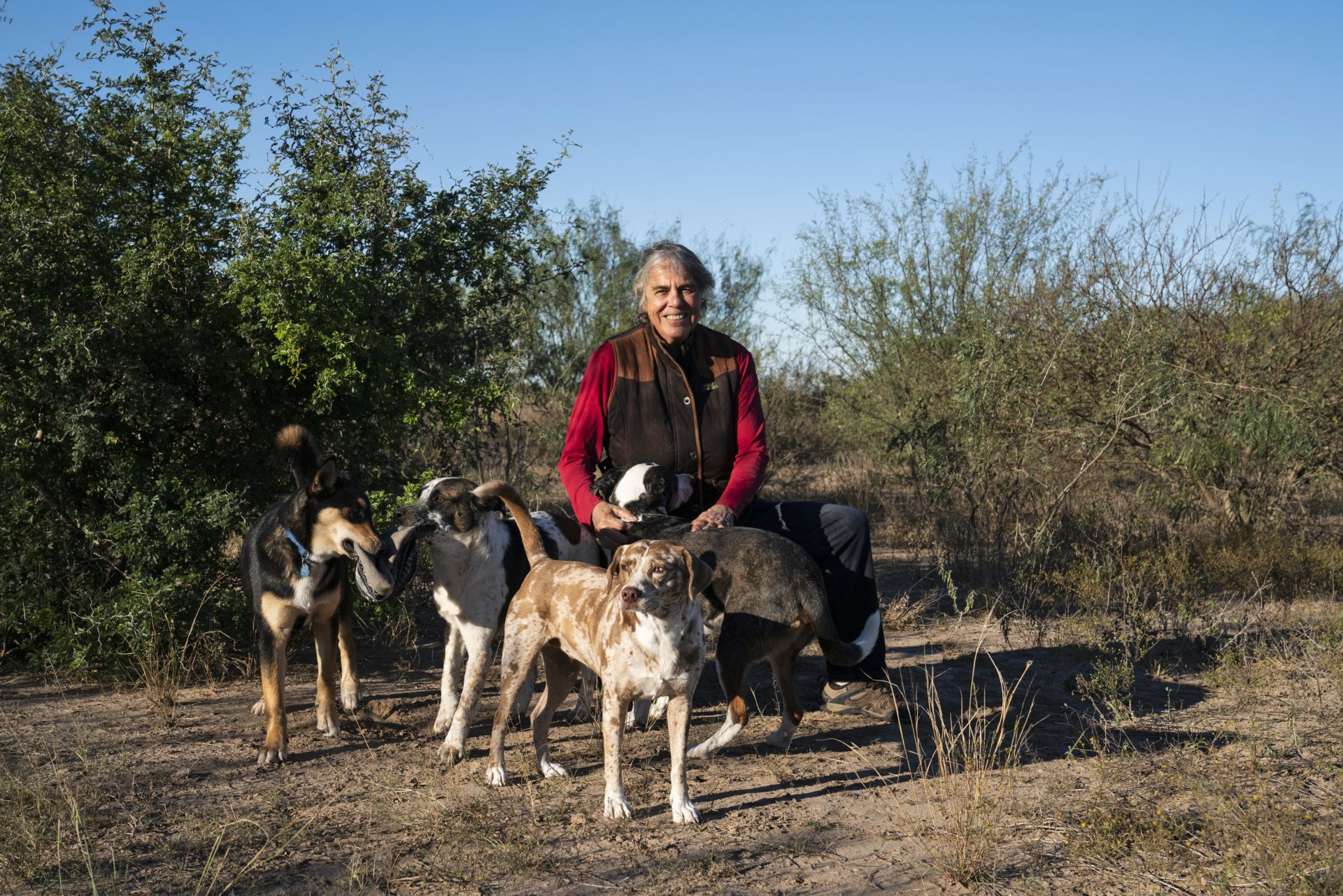 Betty Perez poses with her dogs in an area on her ranch that she is designating as a wildlife corridor. She is past president of the Friends of the Wildlife Corridor, which is adamantly opposed to the border wall.

“Now they’re wanting to fill those gaps in,” Perez says. “And if there’s a continuous wall it would be very devastating for wildlife.”

The four counties of the lower Rio Grande Valley are home to 1,200 plants, 300 butterflies and 700 vertebrates, 520 of which are birds, according to Fish and Wildlife. Among the most common vertebrates are deer, bobcat, armadillos, javelina hogs, the Texas tortoise, and an endangered cat — the small, spotted ocelot.

“We’re afraid that the wall will act like a barrier when it floods, which it does down here,” says Perez. “We get the hurricanes in South Texas. And if that happens the wildlife that are near the river are going to drown. The other thing that’s happening,” she adds, “the wall blocks wildlife from getting to the river to drink. That’s their main source of water.”

Who in the federal government will speak up for the animals?

Thirteen years ago, that person was Ken Merritt. He was the manager of the entire Fish and Wildlife refuge complex in South Texas. When he learned that Bush’s fence would traverse seven miles of their protected tracts, Merritt sounded the alarm. 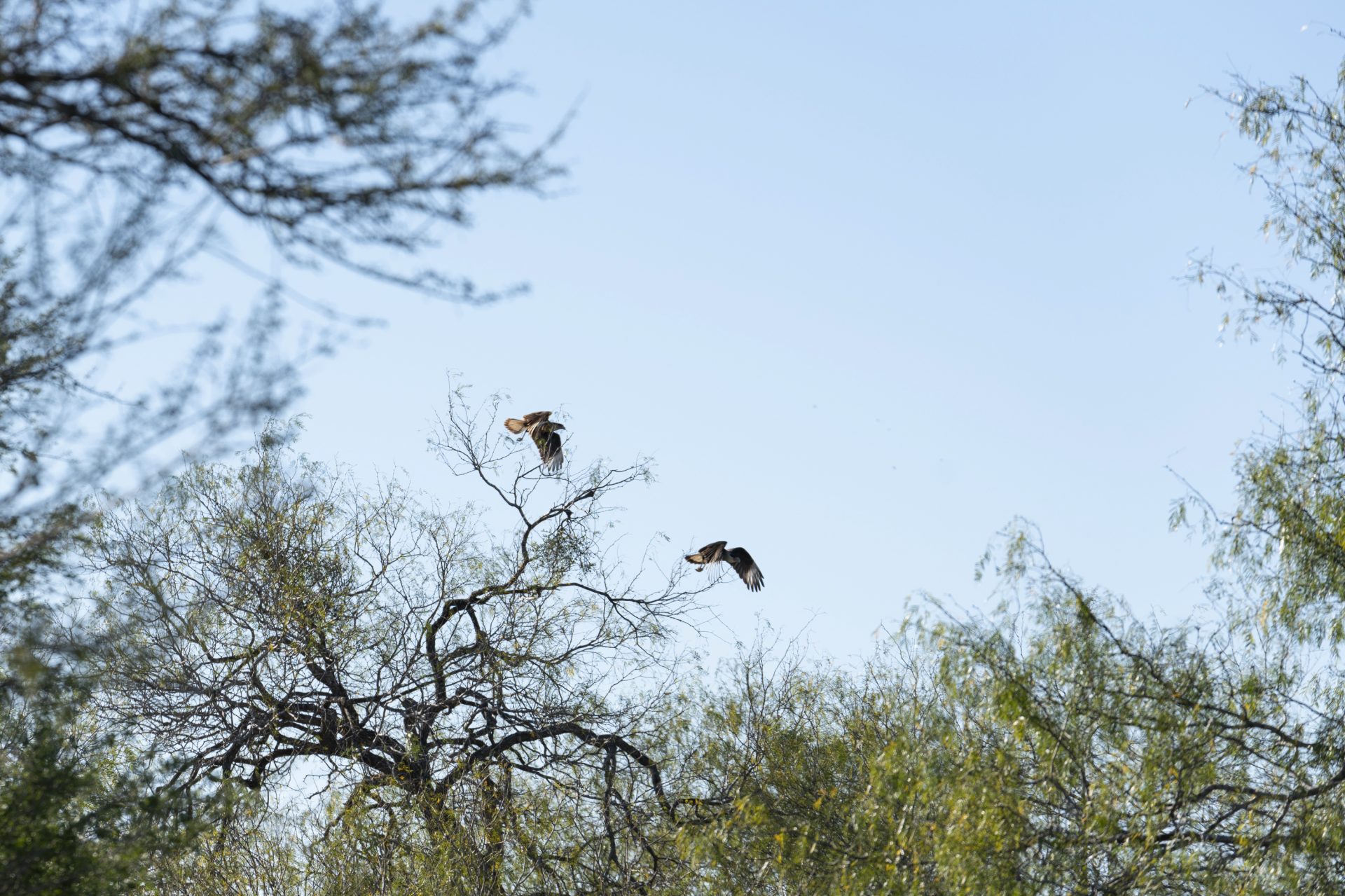 Caracaras—a raptor that often feeds on carrion—take wing near Perez’s ranch. CBP says it is working with the U.S. Fish and Wildlife Service to mitigate the wall’s impact on critters, but an official concedes it’s not easy to protect wildlife while strengthening border security.

“Back then — and I don’t think it’s any different than now — we had a very narrow refuge established along the river. If you cut that in half with a fence that really can’t [be] crossed by terrestrial wildlife, you have a big problem.”

He submitted an official report with an unambiguous conclusion: walls and wildlife sanctuaries don’t mix. But, in the tense atmosphere after the Sept. 11 terrorist attacks, when the government was anxious to beef up border security, “That was not a well-received document,” he says. In fact, Merritt says he was sidelined at Fish and Wildlife because he opposed the border fence. He retired the next year.

A spokeswoman for the U.S. Fish and Wildlife Service tells NPR the agency is concerned about the risk that a barrier poses to animals that cannot escape floods. She says their wildlife experts are working with Customs and Border Protection “to construct large aprons around all future gates along new levee border wall to create areas where wildlife can escape rising water during flood events.” She said CBP has told them that agents will open the gates during high water events. 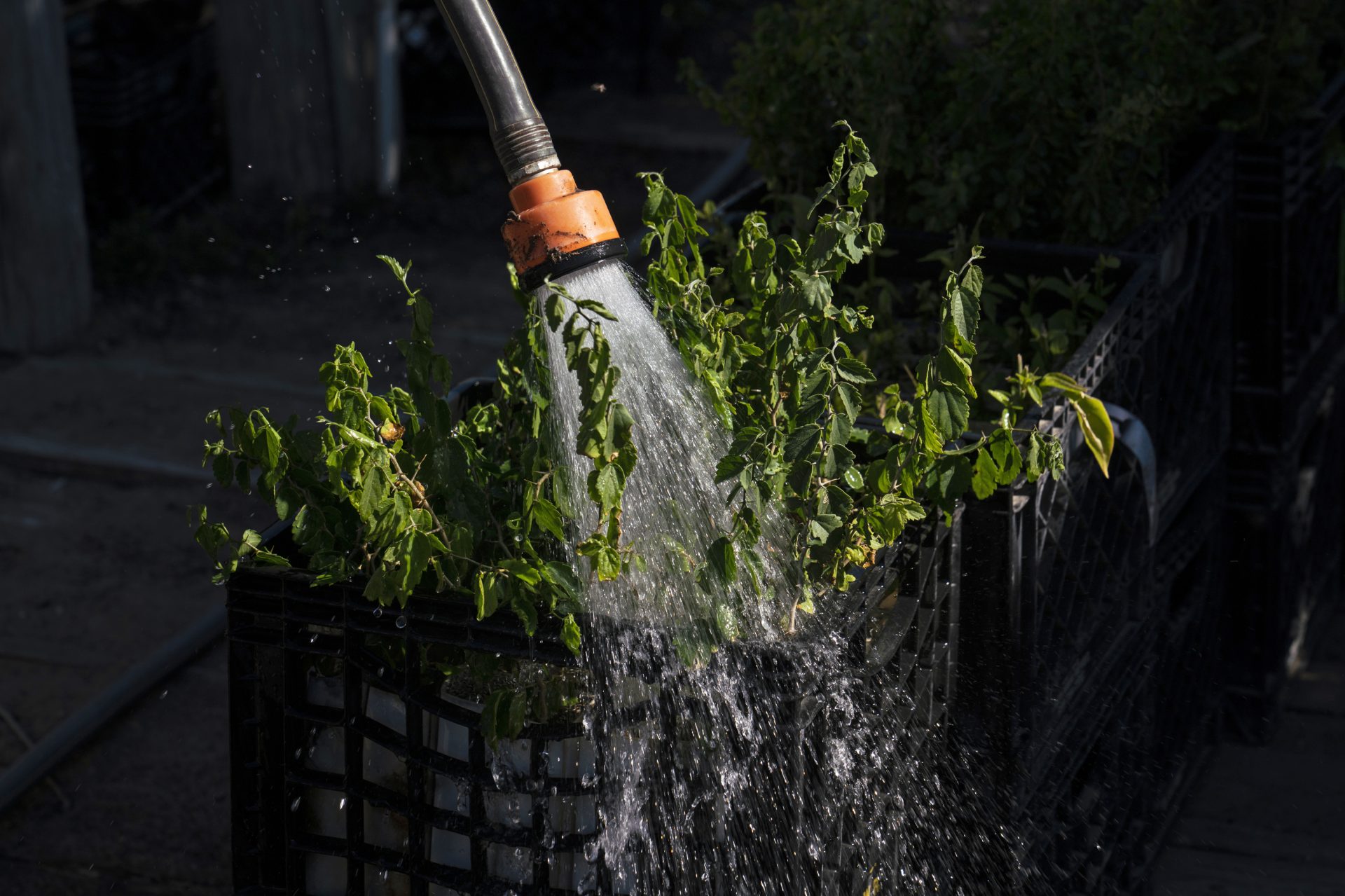 Perez waters the native plants that she grows on her ranch. Most of these plants will be bought by the U.S. Fish and Wildlife Service to revegetate farmland that is part of the wildlife refuge complex.

But Fish and Wildlife stopped short of saying it opposes the wall, like Merritt did in 2007. He’s in touch with colleagues who still work there. “A lot of them are worried about their careers,” Merritt says. “I think most of them have been told not to say a word.”

For its part, CBP confirms that it is working with Fish and Wildlife to mitigate the wall’s impact on critters, but an official concedes it’s not easy to protect wildlife while strengthening border security.

“Can we design it so that it is not as impactful, to develop like a passage corridor? I’ll be honest, those are some challenges that are happening along the whole entire southwest border where we’re putting in wall,” says Carmen Qualia, an assistant chief with the Border Patrol in the Rio Grande Valley.

What’s more, Trump’s border wall dwarfs Bush’s border fence. The current wall is nearly twice as high — 30 feet — which is taller than a two-story house. Floodlights will be on all night long. And an enforcement zone on the south side of the wall will extend out 150 feet. To put that in perspective, 150 feet is the width of a six-lane highway.

To build the massive border barrier through sensitive areas, the Department of Homeland Security has suspended 31 federal laws that protect environmental and cultural features.

Congress has already attempted to protect some of the most important natural and cultural areas along the lower Rio Grande from the bulldozers. A 2019 appropriations bill included language instructing CBP not to build the wall in the Santa Ana National Wildlife Refuge, the National Butterfly Center, or Bentsen/Rio Grande Valley State Park, among other places. But those are just the crown jewels. Conservationists say all of the Lower Rio Grande Valley National Wildlife Refuge has to be intact for the “string of pearls” to be viable. 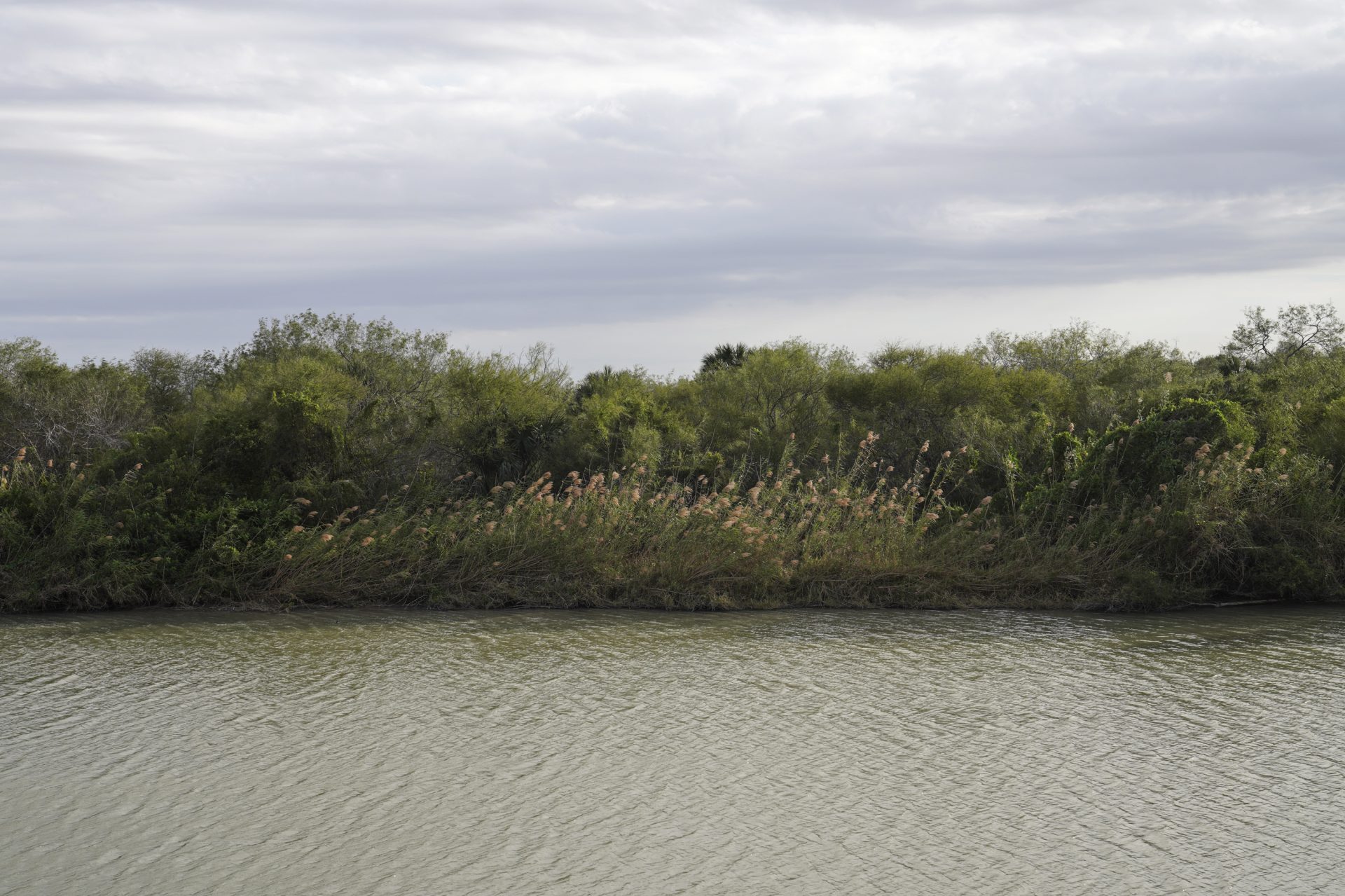 Mexico is seen across the Rio Grande from Brownsville, Texas.The Rio Grande Valley is where four climates converge–temperate, desert, coastal and sub-tropical–which has created rich biodiversity. .

U.S. Rep. Henry Cuellar, a Democrat from Laredo, inserted the language that protects those premier natural areas. He also says he may try to carve out more of the refuge network for protection.

“That certainly is a concern and this will be something that I will work try to protect. Absolutely,” he said in a phone interview.

Time is of the essence. Wall contractors are already on the ground pouring concrete and erecting the tall steel bollards in the Rio Grande Valley.