In many of Pennsylvania’s jails, inmates are issued three things when they arrive: a small bar of soap, a bed sheet and a towel. Sometimes prisoners receive clothing, though someone arriving without socks or shoes is often out of luck.

For them, and for a long list of prisoners’ most basic needs, there’s commissary.

But near the end of the commissary catalogue — listed between $1 Spanish-language birthday cards and $0.90 pens — is a Quran, the holy text for Muslims, priced at $21.20. A prayer rug, used by Muslims during prayer to keep knees, hands and heads clean, costs $23.32. Altogether, the items an observant Muslim inmate needs to pray cost a combined $44.52 at the Adams County facility.

In contrast, the prison sells the King James version of the Christian Bible for $7.95, about a third of what a Quran costs.

The prices for both texts are fairly steep, considering that many religious organizations would give the books to prisoners for free, and lower-cost editions are easily found (a trip to a Harrisburg discount store found Bibles and Qurans on sale for less than $2).

A PA Post review of 20 counties’ commissary menus showed that religious texts and articles cost significantly higher than other products — sometimes they’re even the most expensive items sold.

Christian and Muslim religious leaders said they were shocked by what inmates were being charged, with one Imam calling the price of a Kufi cap — a prayer hat that costs less than $4 in a religious store but sold by one prison commissary for $12.15 — “highway robbery.”

PA Post’s review also found a marked price disparity between Christian texts and those used by other faiths. Across the commissary menus analyzed, Qurans are priced as much as three times more than Bibles. Other religious items, such as Catholic rosaries, are sold for dramatically less money than Muslim prayer beads. Prayer rugs that are sold in religious stores for less than $12 cost prisoners, on average, $24.

As more attention is focused on the ancillary costs of being locked up — for example, many Pennsylvania jails charge a daily rate for room and board — prisoner advocacy and religious rights groups argue that the high markup on Islamic items, specifically, is discriminatory. Some human rights lawyers even say that county jails or the company that manages commissaries could be violating federal law, which requires equal access to religious items. 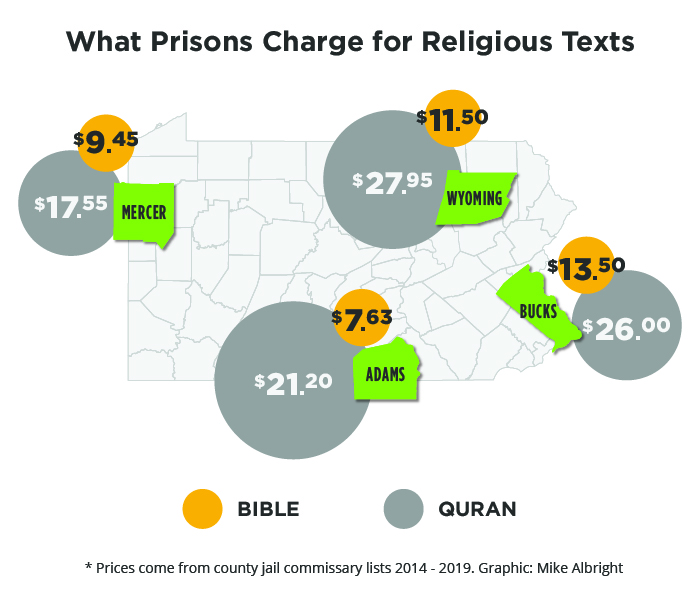 “If prisons are providing these cheap alternatives for other religions that they’re not doing to Islam, that’s a problem,” said Matthew Callahan, a staff attorney for Muslim Advocates in Washington, DC. The organization says its survey shows that 20 percent of state prisoners in Pennsylvania identified as Muslim, totaling more than 10,000 inmates in 2017.

Congress passed the Religious Land Use and Institutionalized Persons Act in 2000 requiring prisons and jails to provide reasonable religious accommodations for inmates. Correctional facilities are also barred from trying to hinder religious practices through “substantial burden.”

At county jails in Pennsylvania that sell a Quran at double or three times the price of a Bible, cost becomes a burden that only Muslim inmates have to shoulder. Those facilities, Callahan said, could be violating the law by not providing equal access. 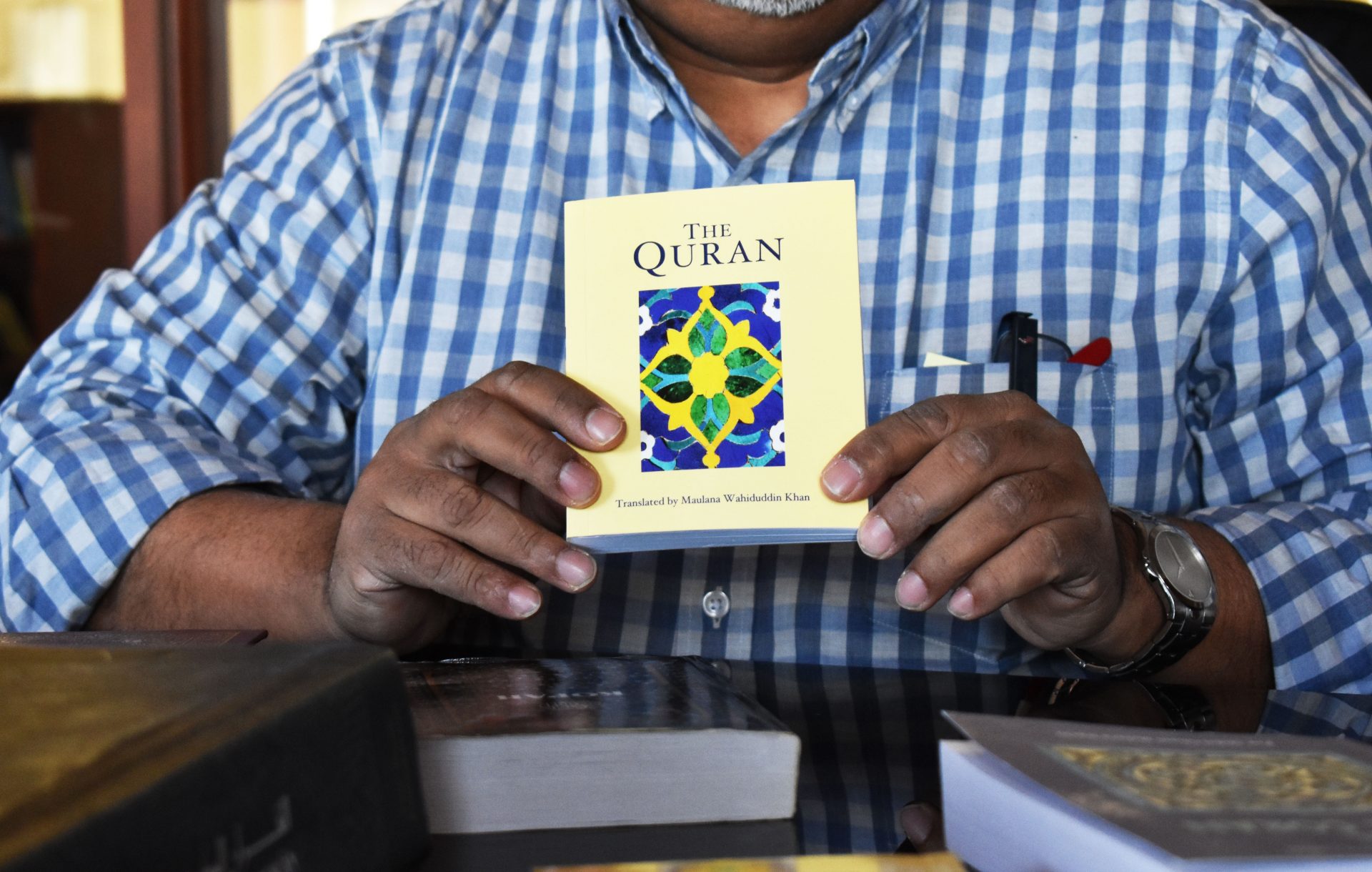 “It’s hard to say they can provide cheap Bibles but it’s impossible for other religious groups,” Callahan said.

And for a population that makes little to no money while serving time, purchasing a Quran is prohibitively expensive. Wyoming County, for example, prices its Quran at nearly $28; Clinton county charges $26.

Only one county jail, Cumberland, equally prices Bibles and Qurans; both cost just under $11.

Unless there is help from the outside, getting religious texts is a next-to-impossible feat.

In Lancaster County’s jail, the Islamic Community Center of Lancaster works with the prison and chaplain’s office to provide inmates a Quran for free — similar to how Christian churches or organizations often donate Bibles; the center also donates prayer rugs to prisoners when asked.

“We get requests from inmates at York, Lancaster and Harrisburg,” said Mukaram Syed, a board member at the Islamic center. “We give out about 100 a year.” 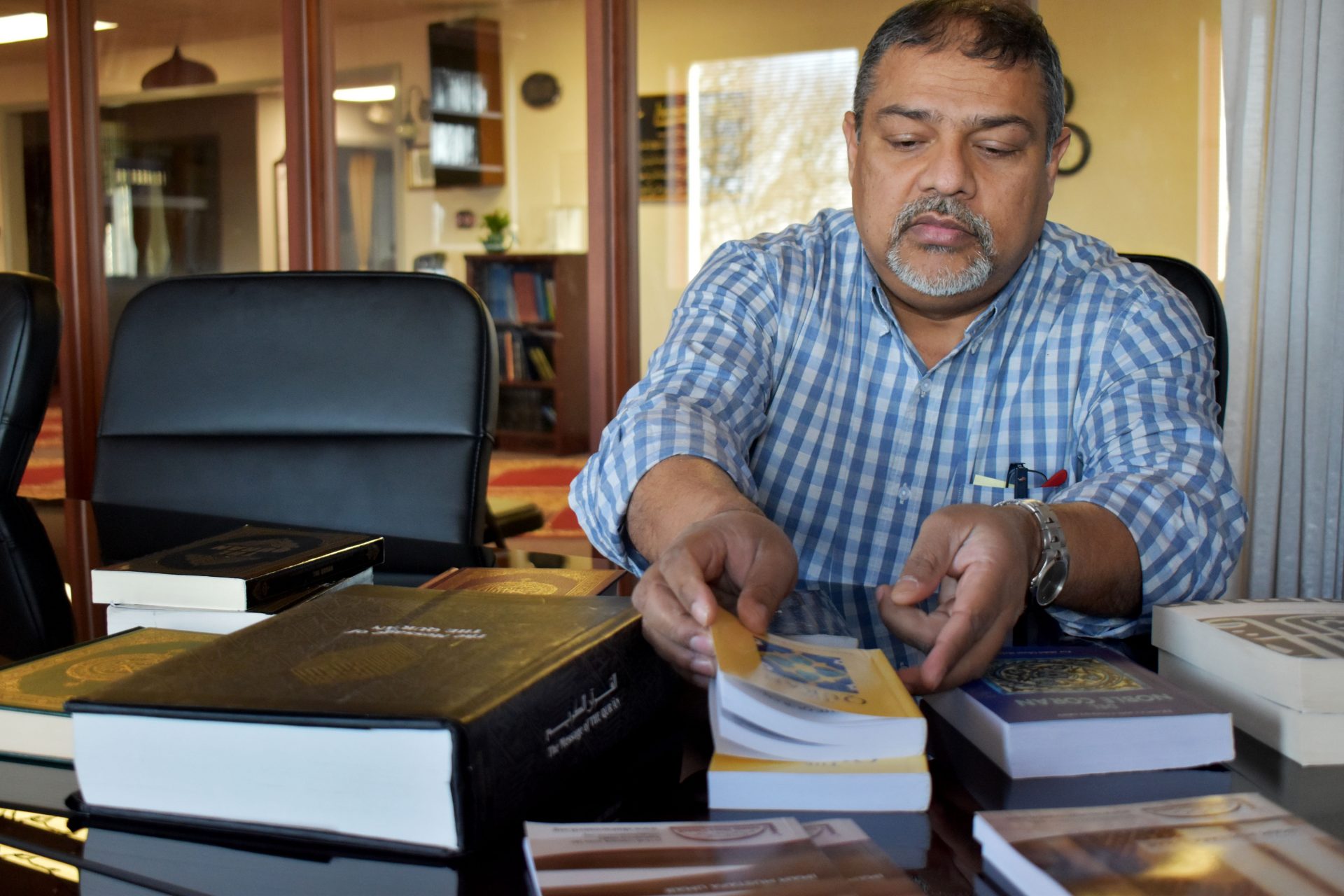 Mukaram Syed, a board member at the Islamic Community Center in Lancaster, shows the different kinds of Qurans the organization provides to inmates. Typically, inmates are given the cheapest texts — under $5 — which are donated. (Joseph Darius Jaafari / PA Post)

“If they’re putting a financial barrier for people getting Qurans, that would be an issue we want to address,” said Ibrahim Hooper with the Council on American-Islamic Relations.

But the county jails don’t set the prices. Multiple wardens, including Adams County Warden Katy Hileman, said they have no control over commissary prices. Keefe Group in St. Louis, Missouri, manages the commissary for many prisons and jails in Pennsylvania.

“These providers sometimes jack the pricing up, something we don’t have a great deal of control over,” said David Varano, warden for Columbia County Prison, which gives Bibles away for free, but only offers Muslim inmates the ability to buy Qurans from the commissary for $20. “If someone wanted a Quran on Amazon, they could most likely find it there much cheaper.”

Multiple messages sent to Keefe’s media team over the past two weeks were not returned.

And though there are commercially sold Qurans that cost $25 because they’re hardback or the pages are edged with gold-leaf, those are not the ones being sold to inmates, said Aunali Khalfan, founder of Tahrike Tarsile Quran, Inc., a publishing company in New York. For the past 30 years, his company has sold texts to correctional facilities. “We sell them to the prisons for $3, sometimes even less than that.”

“The religious prison establishment is largely Christian,” said Johari Abdulmalik, an Imam based in Washington D.C. who works with Muslim prisoners. “There is a kind of favoritism in institutions, with the relationships between churches and pastors and getting that contract to provide religious services. The sort of assumption is that religious services means Christian.”

In Pennsylvania, the trend is similar, said Ahmet Selim Tekelioglu, outreach and education director for the Council on American-Islamic Relations’ Pennsylvania Chapter. He said in Lancaster County Prison, for example, there are multiple Christian chaplains but only one Imam.

An administrator for the prison confirmed in an email last week there are five prison chaplains, and a single Imam who comes in to perform services.

“This system creates an inequity in regards to access to religious materials between Christians and other faith traditions,” Tekelioglu said.