An Iraqi soldier stands guard in front of smoke rising from a fire set by pro-Iranian militiamen and their supporters in the U.S. embassy compound , in Baghdad, Iraq, Wednesday, Jan. 1, 2020. U.S. troops fired tear gas on Wednesday as hundreds of Iran-backed militiamen and other protesters gathered outside the American Embassy in Baghdad for a second day and set fire to the roof of a reception area inside the compound.

Why the U.S. embassy in Iraq became a target of anger again

The latest developments raise questions about why this is happening now and what the U.S. is trying to achieve in Iraq.

An Iraqi soldier stands guard in front of smoke rising from a fire set by pro-Iranian militiamen and their supporters in the U.S. embassy compound , in Baghdad, Iraq, Wednesday, Jan. 1, 2020. U.S. troops fired tear gas on Wednesday as hundreds of Iran-backed militiamen and other protesters gathered outside the American Embassy in Baghdad for a second day and set fire to the roof of a reception area inside the compound.

(Baghdad, Iraq) — Iraq has been dealing with widespread protests for months, but these demonstrations have been directed at the country’s weak, faltering government — and not the U.S.

This changed dramatically as Iraqi militiamen and their supporters targeted the U.S. Embassy in central Baghdad. In violent protests Tuesday, the crowd set fires and badly damaged a perimeter gatehouse. Several hundred returned on Wednesday, throwing stones at the embassy and facing tear gas from the U.S. forces. The protests appeared to be winding down Wednesday afternoon as the militia behind the demonstrations called on its supporters to leave.

Still, given America’s long involvement in the country, the latest developments raise questions about why this is happening now and what the U.S. is trying to achieve in Iraq.

What led to the embassy riot?

U.S. officials have said that for months Iraqi militias — backed by Iran — have been firing rockets at Iraqi military bases where some U.S. troops and American contractors are also stationed. Last Friday, a rocket attack killed a U.S. contractor in northern Iraq. The U.S. responded with airstrikes on five compounds in Syria and Iraq belonging to a group it blames for the rocket attack, the Iranian-backed militia called Kataib Hezbollah, meaning Hezbollah Brigades. The militia says at least 25 of its fighters died.

After funeral processions Tuesday in Baghdad, militia members and their supporters marched into central Baghdad and the fortified Green Zone, straight to the U.S. Embassy. Iraqi security looked on, but did not intervene initially.

The militia members, who were not armed, didn’t breach the high walls and barbed wire of what is one of the world’s most heavily protected embassies. But they battered their way into a large guardhouse gate building and set it on fire. They also burned a second, small guard post. U.S. Embassy security responded with tear gas and stun grenades. 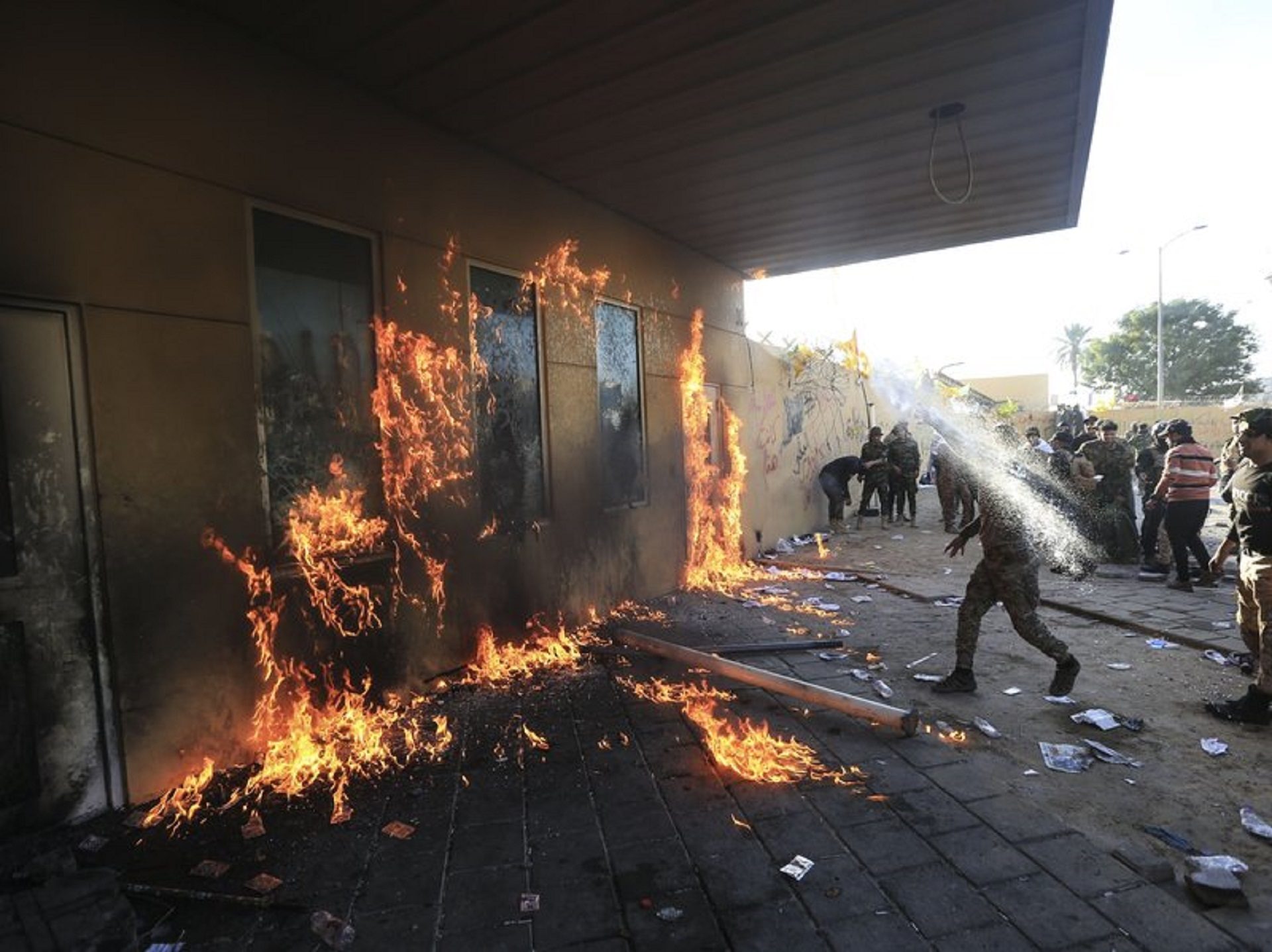 Outraged Iraqi protesters, angered by U.S. strikes on armed battalions belonging to an Iranian-backed militia, attack the U.S. Embassy in Baghdad on Tuesday.

Are these events connected to the other protests in Iraq?

No, these are distinct groups with different — even opposing — views. Since early October, hundreds of thousands of Iraqis have been protesting against their government. Many are young citizens seeking real representation in a political system dominated by sectarian parties with corrupt leaders. They decry the stagnant economy. And they rally against foreign influence — namely Iran. Some demonstrators burned down an Iranian Consulate in southern Iraq in November.

Those protesters are not the same as the militia members and supporters who attacked the U.S. Embassy. In fact, the Iranian-backed militias have opposed and even opened fire on the popular protests. Hundreds have been killed since October.

Iraqi security forces appeared to go easier on the militias on Tuesday, letting them into the Green Zone. The Iraqi government forces have opened fired on the other protesters attempting the same thing.

One result of last week’s U.S. airstrikes against the militia was this: Whereas many Iraqis had focused their anger on Iran, the airstrikes helped shift that anger back at the U.S. The airstrikes were widely condemned throughout Iraqi politics and made America look like it was once again a foreign power meddling in their affairs.

What is the U.S. doing in Iraq?

The big U.S. Embassy in Baghdad, a complex on more than 100 acres along the Tigris River, has been a symbol of the huge American footprint in Iraq. It has come under attack from insurgents over the years.

The U.S. has about 5,000 troops in Iraq now. Then President Barack Obama withdrew all U.S. combat forces in 2011, when Iraq was mostly peaceful.

But by 2014, ISIS had surged out of Syria and took over a swath of northwestern Iraq, including the big city of Mosul. U.S. air power and Iraqi troops returned and helped Iraqi forces — which included Kataib Hezbollah and other Shia Muslim militias — vanquish ISIS in a series of ferocious battles, leaving thousands dead.

Now the U.S. troops help Iraqi special forces track down ISIS sleeper cells and prevent the ongoing attempts by the group to reconstitute and fight a guerrilla war.

That’s not all the U.S. is doing. It is still trying to stabilize and strengthen Iraq’s fragile government. Iraq has shown signs of democracy — several real elections, relative freedoms compared with other states in the region. But the government is rife with corruption, barely enforces the rule of law and often has failed at preventing bombings and political assassinations. All groups have suffered, including Sunni and Shiite Muslims, Christians and the ethnic Kurdish minority. 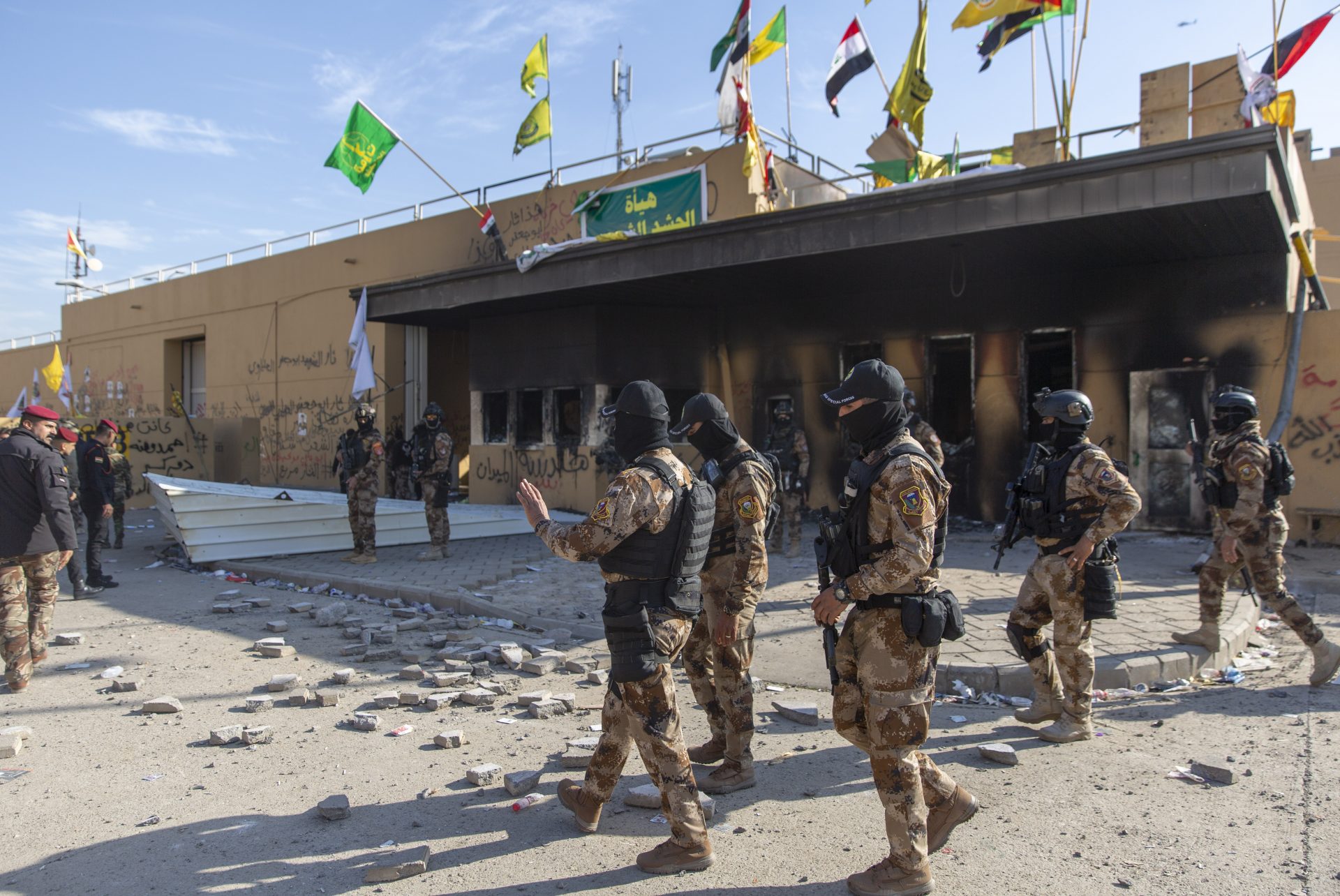 Iraqi army soldiers are deployed in front of the U.S. embassy, in Baghdad, Iraq, Wednesday, Jan. 1, 2020. Iran-backed militiamen have withdrawn from the U.S. Embassy compound in Baghdad after two days of clashes with American security forces.

What has President Trump’s approach been?

President Trump has engaged little with Iraqi leaders, compared with his predecessors, George W. Bush and Barack Obama. He did not meet with the Iraqi prime minister when he went to see U.S. troops in 2018 — a snub noticed by Iraqis. In November, Vice President Pence did the same.

Trump has promised to bring “our soldiers back home from the endless wars,” but says some U.S. forces are needed in the region to make sure ISIS doesn’t come back. He mainly says the U.S. presence is important for countering Iraq’s much bigger neighbor, Iran. That approach has become increasingly unpopular in Iraq.

Trump blamed Tuesday’s embassy attack on Iran because of its support for the militia that apparently led it.

Many criticize Trump’s lack of engagement with the leadership of Iraq. “When we look at the record that we have achieved by relying on force, the results are completely negative, so it’s time to try something different,” says Andrew Bacevich, president of the Quincy Institute and an Army veteran who served in Iraq. “I do believe that if the parties in the region come to the conclusion that the United States is not going to police the region from now until the end of time, that that opens up other possibilities for settling differences without the resort to violence.”

In many ways, the scenes that played out Tuesday encapsulated the forces buffeting Iraq. On one side is the giant U.S. Embassy, powerful but behind walls. On the other are groups backed Iran — hurling epithets and keeping the Americans in lockdown. And in the middle is a thin line of troops from the Iraqi government, seeking to avoid a fight with either of the larger powers.

Don Larsen, only pitcher to throw a perfect game in the World Series, dies at 90