House Speaker Nancy Pelosi of Calif., readies to strike the gavel as she announces the passage of article II of impeachment against President Donald Trump, Wednesday, Dec. 18, 2019, on Capitol Hill in Washington.

President Trump impeached by the House in historic rebuke

President Trump is now just the third president in American history to be impeached. 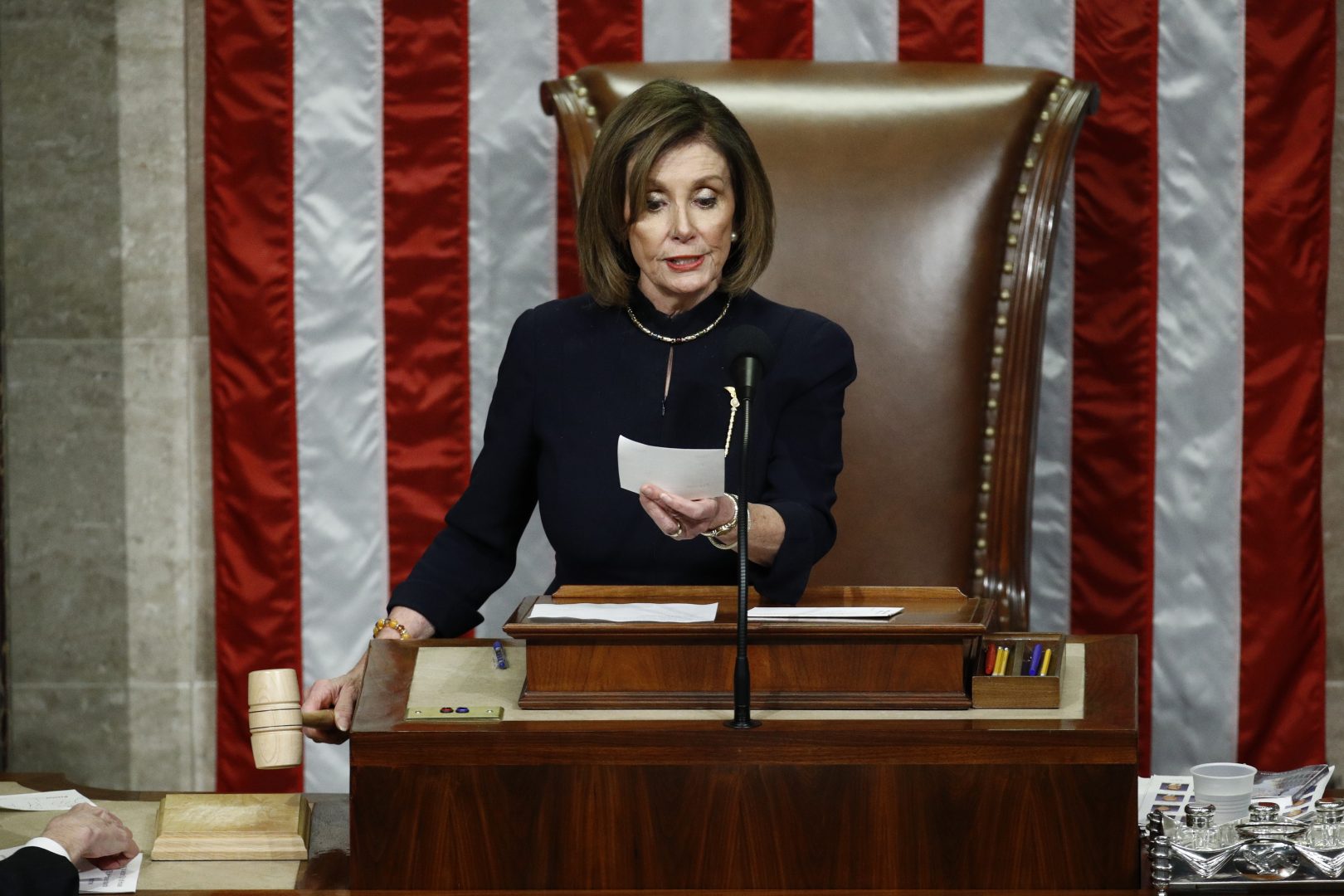 House Speaker Nancy Pelosi of Calif., readies to strike the gavel as she announces the passage of article II of impeachment against President Donald Trump, Wednesday, Dec. 18, 2019, on Capitol Hill in Washington.

(Washington) — House lawmakers voted to impeach President Trump on Wednesday in only the third such rebuke in American history.

The move triggers a trial for Trump in the Senate, expected in January — one in which majority Republicans are likely to permit him to retain his office.

The vote was largely along party lines. Every Republican opposed impeachment.

The sole independent in the House, Michigan Rep. Justin Amash, voted with Democrats.

Hawaii Democratic Rep. Tulsi Gabbard, who is running for president, voted present on both articles. 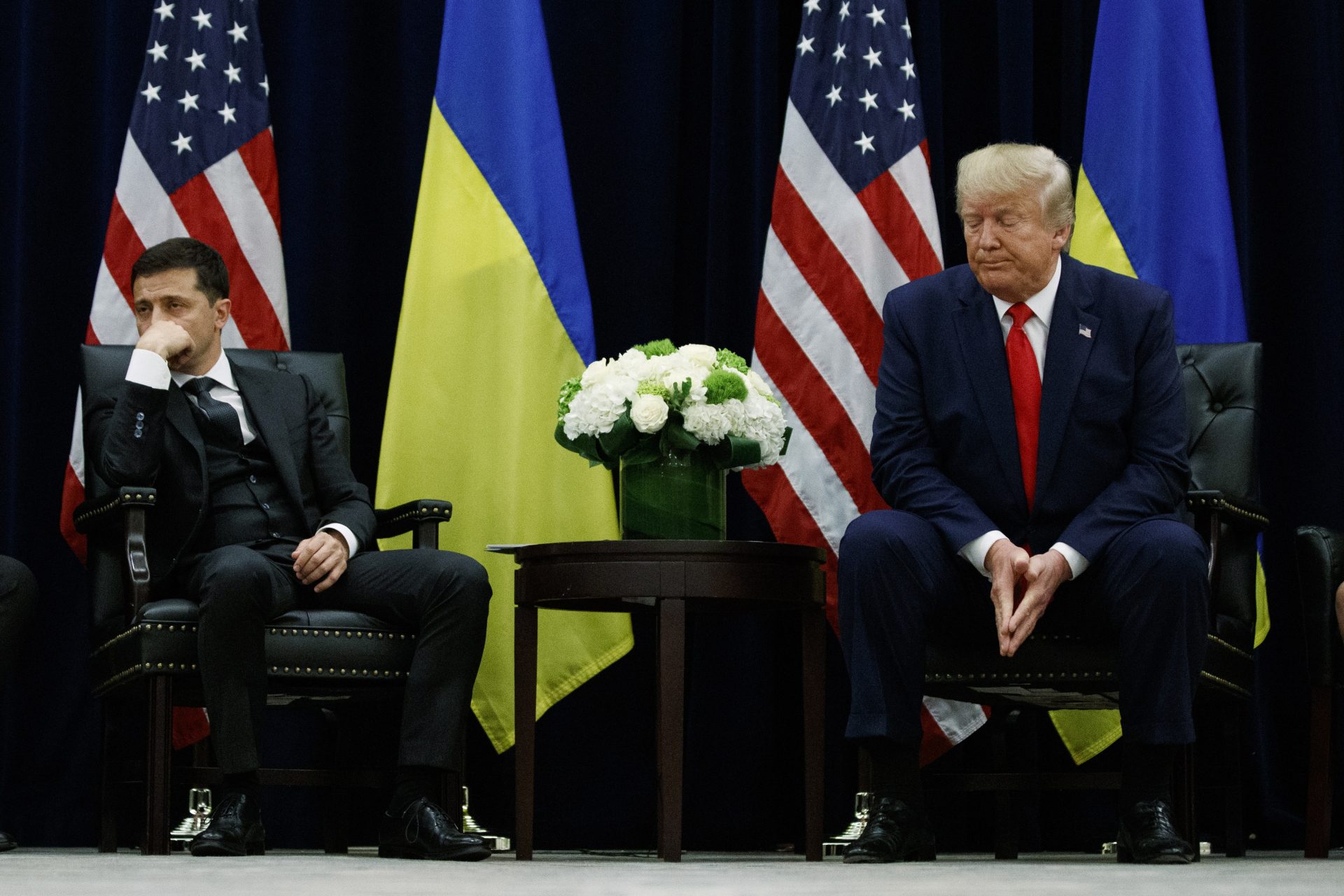 History months in the making

The House vote follows months of talk by Democrats about impeaching Trump and investigations that deepened profound political division across the country.

Discussions accelerated in September after the discovery that Trump wanted Ukraine to conduct investigations that could help him in the 2020 election.

The White House froze some $391 million in military aid for Ukraine for a time this year but ultimately released it; Ukraine’s leaders never agreed to launch investigations that Trump wanted into the 2016 election and the family of former Vice President Joe Biden.

Trump and Republicans said what they called the absence of any real exchange meant there was no crime. In fact, they have argued, the president was doing his duty to investigate what they called “corruption” in a nation long troubled by it.

For Democrats, led by House Speaker Nancy Pelosi, Trump was caught red-handed in the middle of a shakedown, conditioning dollars appropriated by Congress and his own official acts — an Oval Office meeting — on political favors.

The tumultuous frenzy of political life in the Trump era means that it isn’t clear how much the events of late 2019 and early 2020 might resonate with voters by the time they cast ballots in the presidential election on Nov. 3.

But the pending election figured prominently in all sides’ commentary about whether and how the House should take up impeachment, a question that also fractured Democrats after they gained a majority in the 2018 midterm elections.

Calls to impeach Trump began not long into his presidency.

But Pelosi resisted her most anti-Trump members’ desire to impeach, uneasy about the problems that might cause in the 2020 election for members in districts that previously had supported Trump.

Revelations about the Ukraine affair, however, convinced so many Democrats that Pelosi, too, got on board, and the chamber voted on Oct. 31 to formally authorize an inquiry. 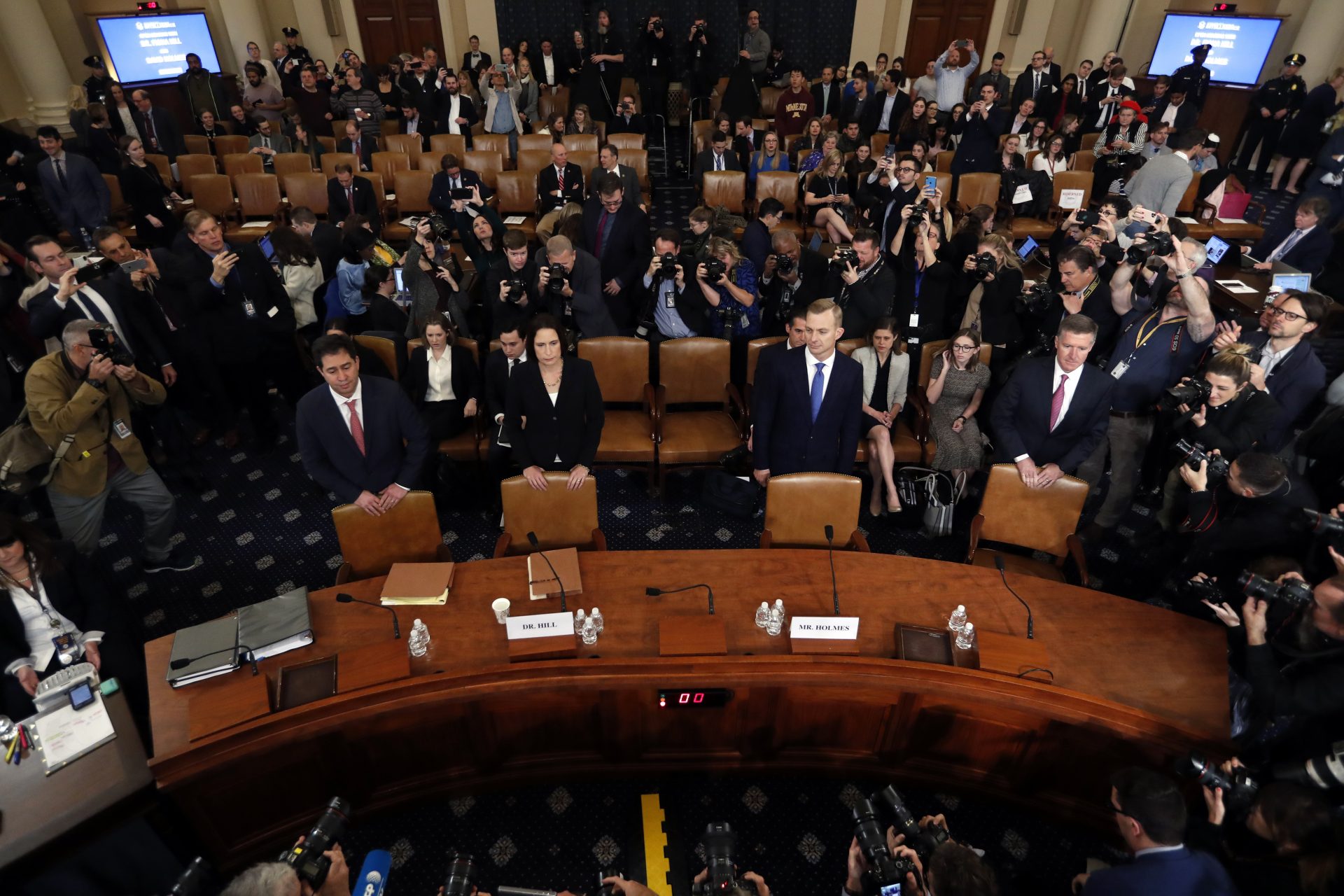 Former White House national security aide Fiona Hill, second from left, and David Holmes, a U.S. diplomat in Ukraine, stand behind their chairs as they arrive to testify before the House Intelligence Committee on Capitol Hill in Washington, Thursday, Nov. 21, 2019, during a public impeachment hearing of President Donald Trump’s efforts to tie U.S. aid for Ukraine to investigations of his political opponents.

Trump and his supporters say Democrats despair so badly about their slate of 2020 presidential candidates that they want to nullify the election before it happens by impeaching and attempting to remove Trump.

The president told supporters at a rally in Michigan on Wednesday night that his opponents were ignoring all his success in order to try to hound him from office.

Over the course of around eight hours of debate on Wednesday, the president’s supporters also reiterated that they not only believed there was no wrongdoing but the process itself was illegitimate.

“This impeachment is a total joke and a total sham,” said Rep. Debbie Lesko, R-Ariz.

Democrats: We must act now

No, argue Democrats — they are preserving the integrity of an election in which Trump has invited foreign powers to interfere. That’s doubly outrageous, they say, following Trump’s invitation in 2016 for Russia to interfere in that election, which, subsequent investigations have found, it did.

House Intelligence Committee Chairman Adam Schiff, D-Calif., who led the Democrats’ investigation, said that’s why the House can’t wait for a vote or get into what he called legal “rope-a-dope” with Trump in court over witnesses and documents.

Schiff repeated those arguments on Wednesday evening in his closing statement to the House ahead of its vote.

Next up: Senate trial

The Constitution now calls for a trial in the Senate over which John Roberts, the chief justice of the United States, must preside.

Senate Majority Leader Mitch McConnell, R-Ky., has said he’ll convene the trial as required and is negotiating with majority Republicans, the White House and minority Democrats about the particulars.

Impeachment, however, is only a quasi-legal process — it is not a strict assessment of whether the president broke the law. It’s largely political and has been since President Andrew Johnson was impeached in 1868 by a faction then known as the “radical Republicans.”

Accordingly McConnell said this week that he is not “impartial” and he would not demure from arranging matters in the best way he sees fit for his ally, the president, and his members in the majority.

One example of this maneuvering: McConnell has decided the Senate impeachment trial will not include outside witnesses, as Minority Leader Chuck Schumer, D-N.Y., had requested.

Many details aren’t settled, however.

McConnell appears most inclined toward a comparatively brief session in which impeachment managers from the House make their case and then the Senate casts a vote on Trump’s fate.

Even so, Sen. John Cornyn, R-Texas, an important leader in the Senate, said on Wednesday that he might be open to private depositions of witnesses. Republicans must agree among themselves about the rules of the road before they proceed.

Pelosi wouldn’t say on Wednesday evening after the vote when she might transmit the articles of impeachment to McConnell, the formal step required to convene a trial.

The speaker also said she didn’t want to name the impeachment managers who would present the House’s case to the Senate until she knows more about the “arena” in which Trump’s trial would take place.

A question of legacy

The bottom line, however, is that McConnell has said he considers it “inconceivable” that the requisite 20 Republicans could join all the Democrats to vote to remove the president, given how staunchly the GOP has stood behind Trump.

If enough Republicans were to defect, Trump would lose his office with no chance to appeal and Vice President Pence would become the 46th president.

In all likelihood, however, Trump’s red wall in the Senate will remain intact and he will preserve the presidency subject to the outcome of the election in November.

The president told Pelosi in a letter on Tuesday ahead of the House vote that she and Democrats had cheapened and abused their powers under the Constitution.

Democrats argue the president’s actions in the Ukraine affair left them no choice but to act — that what they call his invitation of foreign interference is so egregious that even an impeachment that could be stillborn in the Senate was worth pursuing.

“Impeachment is a form of deterrence,” said Rep. Ted Lieu, D-Calif., during the floor debate on Wednesday.

If this was all the House could do, that meant the House had to do it, he said.

“No president ever wants to be impeached. And whether Donald Trump leaves in one month, one year or five years, this impeachment is permanent,” Lieu said. “It will follow him around for the rest of his life and history books will record it. People will know why we impeached.”

Impeachment timeline: From early calls to a full House vote