More and more school districts are adding propane buses to their fleets and switching from diesel. They cite financial and environmental benefits.

“Our plan is to eventually phase out diesel and go all propane." 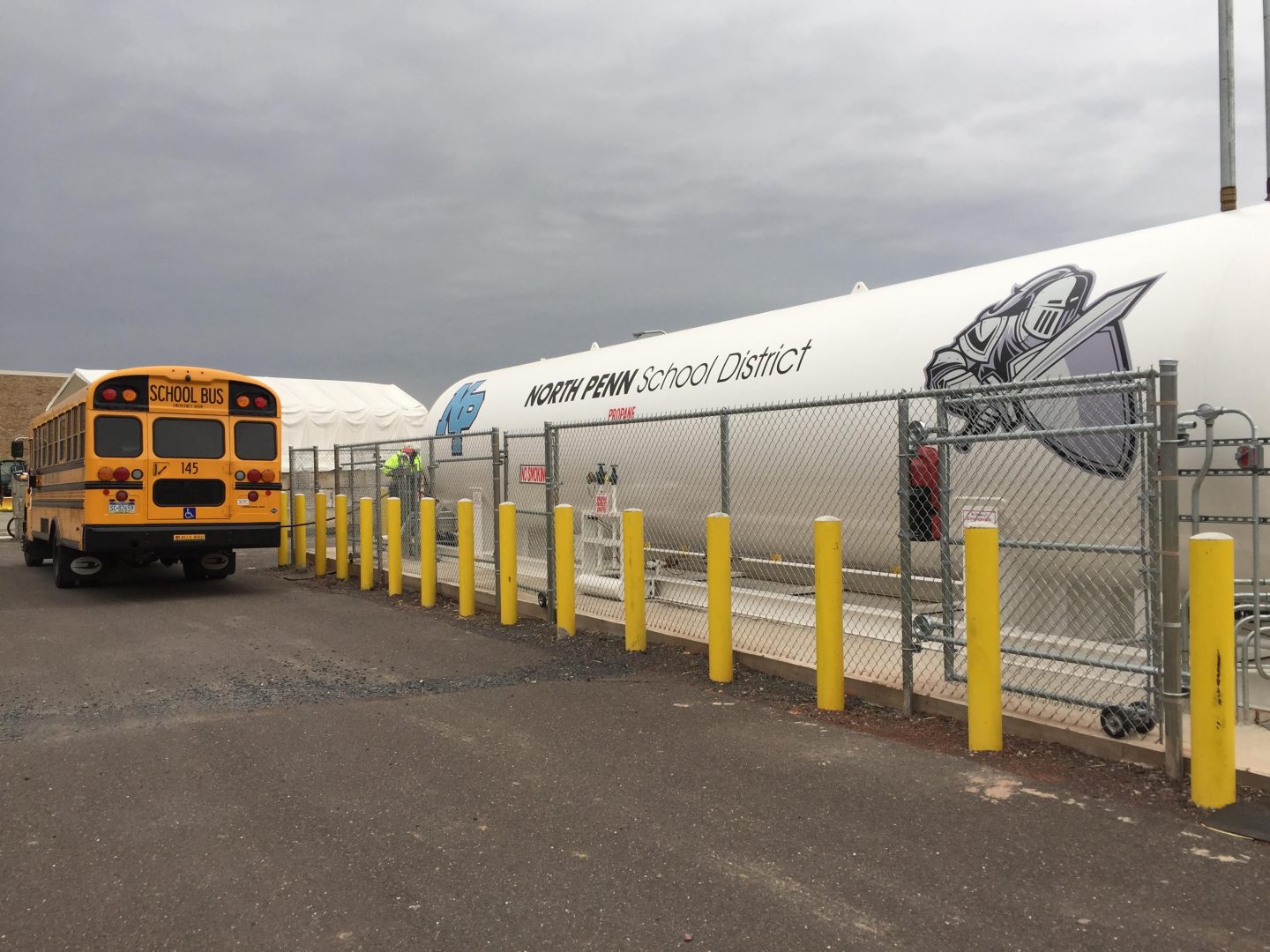 More and more school districts are adding propane buses to their fleets and switching from diesel. They cite financial and environmental benefits.

(Lansdale) — The first thing you notice when riding one of North Penn School District’s new propane buses is how quiet it is.

There’s no rhythmic idling, no percussive acceleration — just a low hum from the propane-powered engine.

“Our drivers don’t even need their intercom systems anymore because it’s so quiet on the bus,” said Nicholas Kraynak, North Penn’s transportation coordinator.

Children come to school calmer, he said, because they don’t have to shout to their friends on the bus, and drivers have said the rides to and from school are more pleasant.

But the climate inside the bus isn’t what drove Kraynak to pursue propane buses for the district. It was the climate outside — and the financial climate — that prompted him to make the switch.

Propane costs half the price of diesel, the current fuel of choice for most school bus fleets, and has lower nitrogen oxides, or NOx, emissions and greenhouse-gas emissions than diesel.

Kraynak made a pitch for propane to North Penn’s school board in February 2018, outlining the cost savings and environmental benefits. A 10-minute presentation ended up lasting 50 minutes. The information struck a chord, and the board wanted to know more.

Almost a year and a half later, in June of this year, the district in Montgomery County took delivery of 14 propane buses and in October installed an 18,000-gallon propane tank beside the bus barn.

Kraynak has a bid out for another seven propane buses, which would bring the total to 21 of 136. But he doesn’t plan to stop there.

“Our plan is to eventually phase out diesel and go all propane,” he said.

Council Rock School District in Bucks County signed an agreement with its busing contractor, First Student Inc., in 2015 and began converting its fleet to propane in 2016. Now, all but four of its 149 buses run on that fuel.

Like North Penn, Council Rock has seen a steep decline in fuel and maintenance costs.

“Aside from some upfront costs in setting up the infrastructure to support it, I don’t see why you wouldn’t do it,” said Matt Adams, Council Rock School District’s transportation manager. “Any money that you sink into it up front I think you would get back in savings very, very quickly, just in the cost of your fuel.” The new infrastructure is something many districts have to consider. Kraynak said the new propane tank cost $230,000. Of that, $155,000 was paid through grants from the Pennsylvania Department of Environmental Protection, through both Alternative Fuels Incentive Grants and Volkswagen settlement funds.

“If we didn’t have those grant funds, I don’t know that we would have been able to move forward with this project,” Kraynak said.

Still, he said, with the help of state funds, the district was able to make the change and is now paying less than a dollar per gallon for propane fuel, while diesel costs more than $2 per gallon.

“Honestly, I wish we’d done this a long time ago,” Kraynak said.

Kelly Rhodunda, transportation manager for Upper Moreland School District, began researching propane buses in 2013 and eventually converted nearly all of the district’s buses to propane in 2016. Like North Penn, Upper Moreland was able to make the transition thanks to DEP grants, which totaled $650,000. That helped the district buy 35 buses at once, install a fueling station, and eventually reach the 40 propane buses it has in service today.

Upper Moreland also spent $3 million out of its own budget, both in making those upgrades and other reconfigurations to support the changes, but Rhodunda said the buses will be paid off this year.

“We have recouped a lot of those costs through the maintenance savings and the fuel savings over the past few years,” she said, noting the district saved $250,000 in the first year alone.

Districts that use propane buses end up saving a lot of money on maintenance because propane burns more cleanly. A diesel bus might use 25 quarts of oil every 5,000 miles, whereas a propane bus only needs about seven quarts.

“We’re still saving money, even with … less miles per gallon,” he said.

And when it’s bitter cold, propane-fueled buses start up immediately, unlike diesel buses, which require idling and electricity to warm up the engines. When it drops below 20 degrees, districts like North Penn need to bring in a crew as early as 5 a.m. to start up the diesel buses.

“Just the fact that we have to bring additional people in to start the buses, we have to pay salaries for an extra hour’s worth of work, it starts to really chip away at our budget,” Kraynak said. The fact that propane buses don’t need that extra step is huge, he added.

Although most districts make the switch primarily for the cost savings, they’re also drawn to propane’s better emissions profile. It has lower nitrogen oxides emissions than diesel — up to 90% lower than pre-2007 diesel buses, according to Blue Bird, which manufactures ultra-low NOx buses. The Department of Energy published a report stating that the use of propane as a fuel in vehicles can reduce greenhouse-gas emissions by 15%.

The buses also don’t release any exhaust fumes, making it more pleasant for those in the community.

“It really is a win, win, win for the district,” Kraynak said.

Propane isn’t without its downsides. About 70% of propane production comes from natural gas, the extraction of which comes with its own controversies, and the remaining 30% is produced through petroleum refining. It also can be subject to regional shortages, as parts of the Midwest have experienced this year.

Still, the emissions data shows it is a less dirty fuel than diesel or gasoline, and the buses are far cheaper than electric buses, which cost about $375,000 per bus versus about $78,000 for a propane bus. Electric buses can also only go about 100 miles on a charge and take eight hours to recharge. For a district like North Penn, which encompasses about 44 square miles, that wasn’t an option.

“Even with grants, it didn’t make sense for us,” Kraynak said.

Tucker Perkins, president and CEO of the Propane Education and Research Council, said when it comes to school buses, propane makes sense.

“[Propane] is just better for the climate, whether that climate is inside the bus or outside in the community.”