Mitch Shellenberger loads harvested hemp plants into a small trailer so helpers can then line them up to dry on Tuesday, October 29, 2019.

Pa.’s first-time hemp growers had high hopes, but it could take years to see if the crop is worth it

(Mount Joy) — Mitch Shellenberger’s hands are covered in a dark, oily residue that’s tough to get off. It’s evidence of the long hours he’s spent handling acres and acres of industrial hemp as he rushes to harvest and dry it.

By late October, he’s already invested months growing a variety of hemp to be used for CBD, a compound that’s used in health supplements, and he has a ways to go.

Shellenberger is a third-generation farmer running a hog and heifer operation in Lancaster County. He grows field crops, like corn, to feed the livestock.

Last spring, he was approached by two private investors who wanted to get into the hemp business. It’s a tough time to be a farmer, and he recalls thinking that this was a chance to actually make some money. He dived in.

Shellenberger was one of many in Pennsylvania ready to gamble on what some advocates tout as the state’s next cash crop. 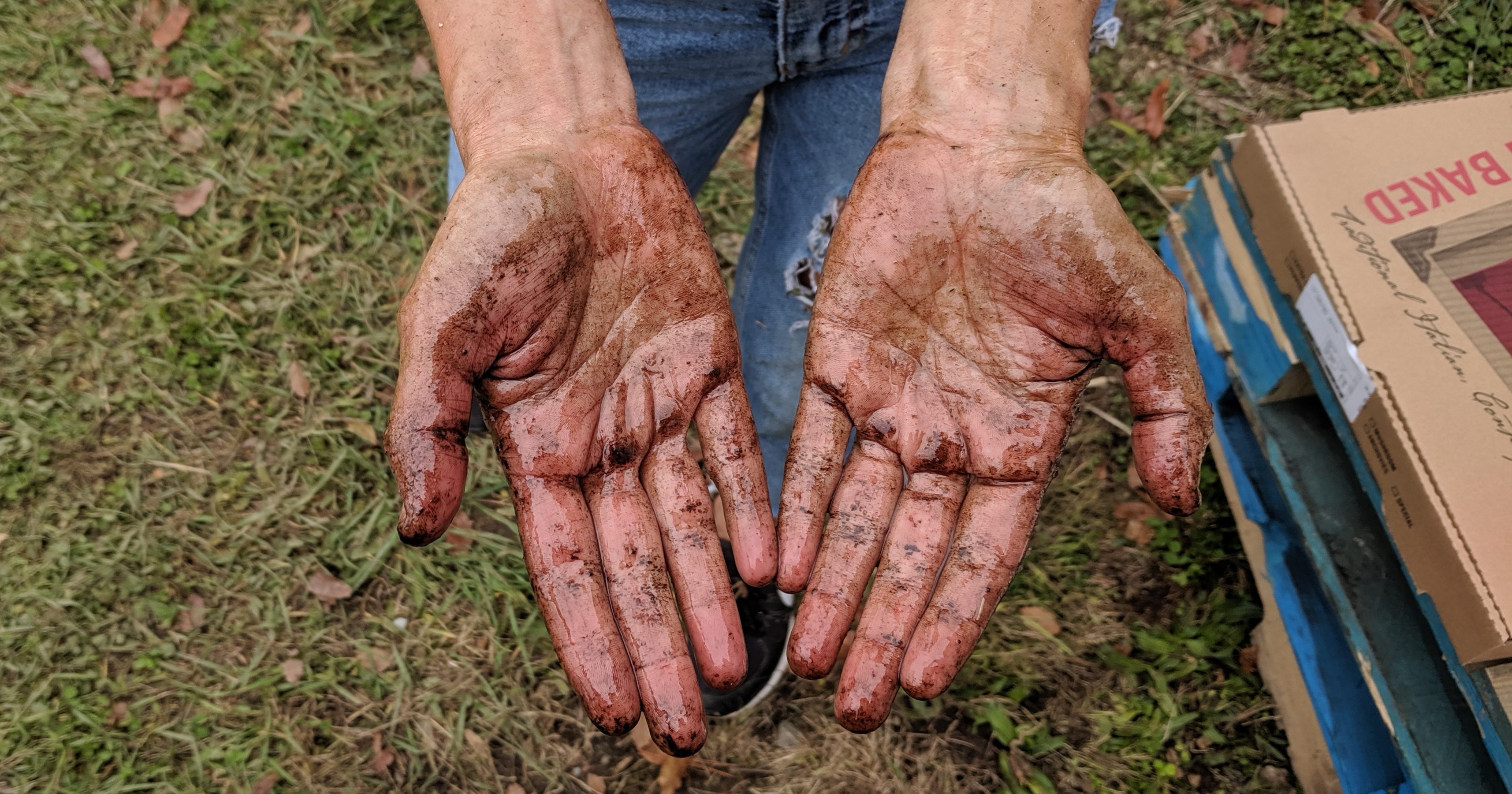 During a lunch break on on Tuesday, October 29, 2019, one of Mitch Shellenberger’s volunteers holds out her hands to show the residue left behind from handling industrial hemp. The crew was using coconut oil to remove it.

A spokeswoman said the department strongly recommended farmers line up a buyer before putting seed in the ground, and they believe many followed that.

Even with the first commercial growing season behind them, there’s still a lot of uncertainty for hemp farmers. Questions linger about how much demand there will be for hemp products and whether the crop can add to a grower’s bottom line.

In Shellenberger’s case, his investors’ money covered the financial risk of growing a crop with an untested market, but he had to sink a lot of time and energy into the endeavor.

“It’s been a really uphill climb,” he said. “It’s not just the work. It’s the fact that we need to figure it out. Every step of the way is like, what’s next? Well, I don’t know how to do that.”

That complicated matters when it was time to harvest. The plants have to be dried before being sent to a processor. Drying helps cut down on mold and disease. In some western states, farmers can let the crop dry in the field, but Pennsylvania is too humid for that.

Shellenberger found an old hog barn that he rigged into a makeshift drying facility. His wife, in-laws, and friends pitched in to help him unload trailers of hemp and line up the plants — which look like small, ragged Christmas trees — in the slats between the barn’s floorboards, where an industrial-sized fan could blow a steady breeze over them. A variety of industrial hemp used for CBD extraction stands in a field in Mount Joy, Lancaster County on Tuesday, October 29, 2019.

Shellenberger has been promised a cut of the profits from this crop — if it makes a profit.

Processors of CBD hemp pay based on how much of the compound is in the plant. And the price has fluctuated.

At the beginning of the growing season, some farmers contracted their crop for $4 per percentage point per pound of hemp. For a crop that’s 10 percent CBD, that would have brought in $40 per pound.

But lately, prices have gotten as low as 50 cents per point — which would mean $5 per pound for that same crop.

Erica Stark, executive director of the Pennsylvania Hemp Industry Council, said more fluctuations in the market could come with impending regulations on growing and selling from the U.S. Department of Agriculture and Food and Drug Administration.

She said it will likely take a few years before the nascent hemp industry finds a balance between supply and demand, and a clearer picture of the market emerges.

Many farmers chose to grow CBD hemp this year because processors for the product already exist, and it promised a higher return on investment. But Stark said she thinks fiber hemp will outstrip CBD hemp’s potential, once there are enough processors to handle it. Right now, she said, there is a bottleneck between growers and processors that is limiting options for farmers.

At the so-called “HempPlex” in Red Lion, York County, Steve Groff is trying to widen that bottleneck.

“A lot of the things that people like to talk about with hemp — with bio-plastics and textiles and car parts — those are all great ideas and doable, but we need large-scale supply chains that are consistent,” Groff said.

Key to Groff’s supply chain is a special machine called the HempTrain.

It was developed in Canada to process industrial hemp without breaking down the fibers too much. This year, Groff contracted 2,000 acres of fiber hemp from area farmers that the HempTrain will turn into mainly construction materials, like an additive to concrete.

Watch the machine in action:

He admits there’s still a lot to learn about hemp and he sees some years of volatility ahead for growers. But he believes in the crop.

“This industry isn’t going to go away. Certainly, there will be some farmers who don’t ever do it again, but many will persist, and we’ll have a great and growing industry,” he said.

The week before Thanksgiving, Mitch Shellenberger finished harvesting his 30 acres. He’s still waiting to hear if his crop will bring a profit. But he’s optimistic.

“I think next year will be very different because of the knowledge that we’ve gained this year,” he said. “But it certainly didn’t come without a lot of exhausting days.”