Woman sues Philadelphia pharmacy for outing her as transgender, HIV-positive

(Philadelphia) — A transgender woman has sued the SunRay Drugs pharmacy chain for exposing her HIV status and gender history to her neighbors.

The lawsuit, filed Monday in the Court of Common Pleas by the AIDS Law Project of Pennsylvania, asserts that the Philadelphia-based pharmacy delivered the woman’s prescription drugs, clearly labeled, and left them in her Delaware County apartment building’s common mailroom. The woman is identified as Jane Doe in the lawsuit to protect her privacy.

On Nov. 27, 2018, a pharmacist from SunRay called Doe to let her know the package was being dropped off, according to the complaint. Doe said it was fine to leave it in the mail room, but she assumed it would be packaged like usual: with her name on it, but without any identifying information from the sender or its contents. That had always been the case in the past, and Doe had been using that pharmacy for the past year according to her lawyer, Ronda Goldfein with the AIDS Law Project.

This time though, the package listed all the drugs it contained, including Biktarvy, an antiretroviral drug used to treat HIV, and delestrogen estradiol, a hormone taken as a part of gender transition. 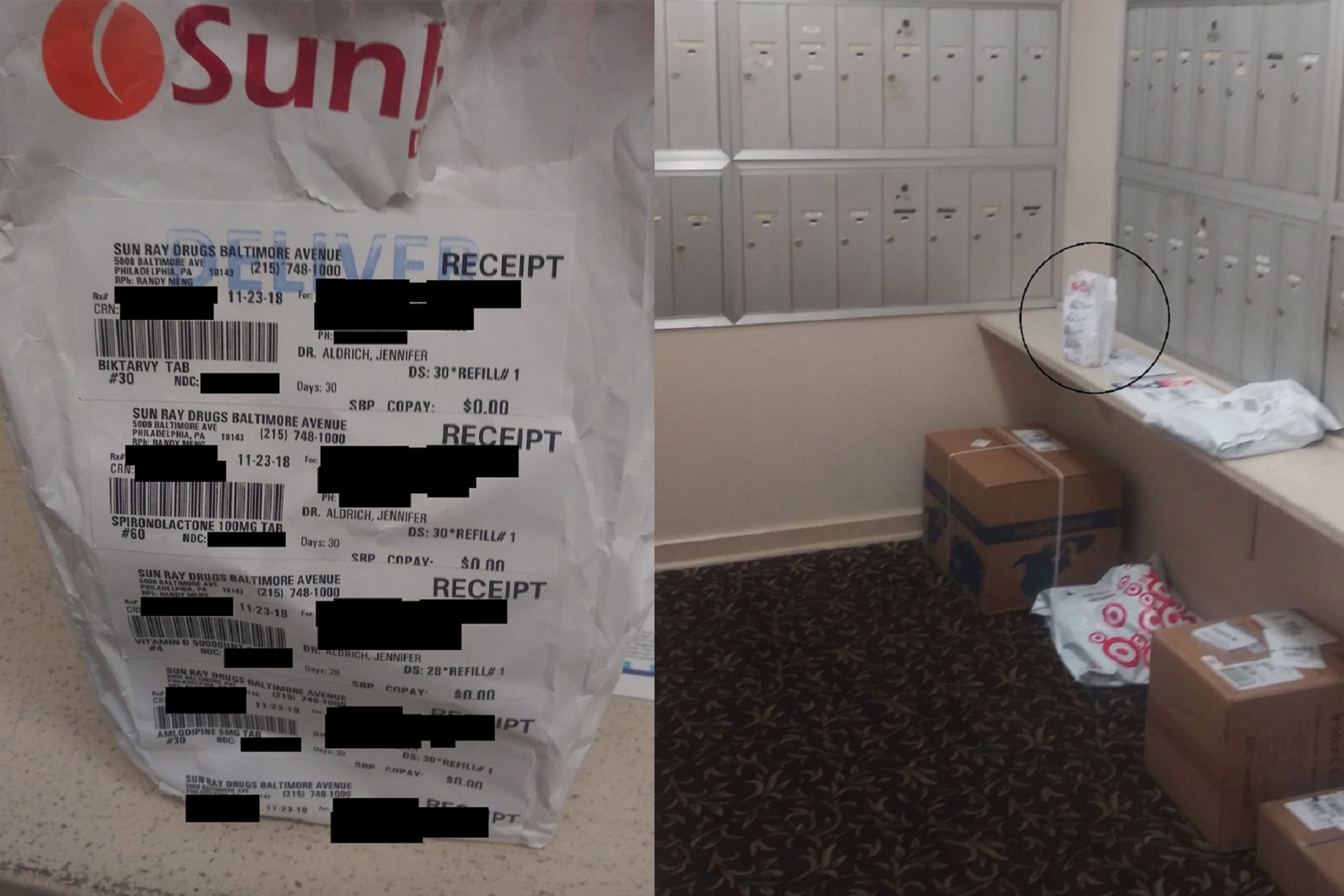 Horrified by the breach in privacy, Doe called the AIDS Law Project the next day, which contacted SunRay to alert them about what had happened and demand it stop that practice. Two days later, a SunRay representative named Randy told the AIDS Law Project that SunRay would no longer deliver packages in a way that disclosed their contents.

The lawsuit explains that Doe had lived happily in the apartment building for the last five years, socializing casually with her neighbors, but keeping her HIV status and gender history private. After the incident, according to the lawsuit, neighbors who had been friendly turned cold. She said she overheard several neighbors in the laundry room talking about the “drag queen with AIDS.” As soon as she entered the room, the conversation stopped.

Doe claims she has suffered damages, including embarrassment, humiliation, anxiety, fear and loss of social support. She doesn’t socialize with neighbors, attend holiday parties or use the building’s pool anymore. She enters the building through the garage and started shopping at a grocery store farther away to avoid possible run-ins with her neighbors. Doe has become so uncomfortable in her home, according to the suit, she wants to move, but doesn’t have the funds to do so.

Ronda Goldfein said her firm tried to resolve the issue outside of the courts with the operators of SunRay, but weren’t able to convince them to compensate Doe for the damages the plaintiff felt the pharmacy had caused. So, they filed a lawsuit.

“We wanted to send a message,” said Goldfein. “The message is, you have to be thoughtful about people’s privacy.”

A representative for SunRay declined to comment. According to its website, the company has a long history in the region, and at one time operated 150 stores. By 2003, the chain was down to just one location in West Philadelphia. It was on the brink of being bought by a large corporation, but remained independent, and now operates eight pharmacies and 16 affiliate pharmacies in Pennsylvania and New Jersey.

Goldfein said that because of advances in treatment and a leveling-off in new HIV infections, there’s a perception that it’s not a problem anymore.

“It’s a virus, there should be no shame in having a virus,” she said. “But we also know that when our private info gets beyond our control, there can be really painful repercussions.”

The complaint pleads a violation of Pennsylvania’s HIV-related Information Act, as well as counts of negligence and overall privacy violations.

Under Pennsylvania’s Confidentiality of HIV-related Information Act, no medical professional or individual who receives confidential HIV-related information in the course of providing healthcare  to a patient may disclose that information without the written consent of the patient.

The AIDS Law Project has a track record of successfully using the law to protect the privacy of HIV patients. In 2017, the organization sued insurance giant Aetna for revealing the HIV status of 12,000 people through clear plastic envelope windows on mailers. Aetna settled for $17 million last year.

Monday’s suit does not specify the amount in damages that Doe is requesting. Goldfein said historically, it’s been hard to quantify the harm caused by stigma.

“These people hate me because I am who I am,” Goldfein said. “How do you put some numbers on that?”

Central Pa. lawmaker sounds alarm over care for people who can’t breathe on their own