Sandra Hill (left) with her godson Robert Williams during a visit Hill made to see Williams at SCI Albion on Dec. 15, 2011. Hill says she has never missed a holiday visit. But this year she said she might not be able to handle visiting him from behind glass. Some Pa. prisons forbid any human contact, even close family relatives. (Photo courtesy Sandra Hill)

For families and the incarcerated, the holidays are ‘devastating’

Sandra Hill (left) with her godson Robert Williams during a visit Hill made to see Williams at SCI Albion on Dec. 15, 2011. Hill says she has never missed a holiday visit. But this year she said she might not be able to handle visiting him from behind glass. Some Pa. prisons forbid any human contact, even close family relatives. (Photo courtesy Sandra Hill)

In 2011, Sandra Hill had one Christmas wish: She wanted to see her godson, Robert Williams, who was locked up in State Correctional Institution Albion, about five hours west of her home in Darby. She had given up on that wish because of tight finances, but a friend offered her a ride to the facility.

Hill cried when she saw Robert. She held his hand, touched his face and told him how much she loved him. Since then, she said she hasn’t missed a Thanksgiving or Christmas holiday visit. Except for possibly this year, when if she sees him,she won’t be able to touch or hug him because the two will be separated by a glass window.

“It affects me terribly — does something to me physically,” Hill said, referring to not being able to touch her godson.“Time and again the holidays have been a horrific time.”

Though many facilities make an attempt to recreate traditional holidays for inmates and their families, some county jails do nothing at all. And even in cases where the jails or prisons put on group events, bake-sales or performances, inmates face tough penalties if they are caught organizing their own gift-exchanges.

The families of prisoners  say that they also suffer during the holidays, specifically because of the state’s tough visitation policies. In some jails, all physical contact with family is forbidden, even with the inmate’s child.

“Thanksgivings are not what I want them to be, and I often think about my chances of ever being able to spend my holidays with my family,” said David Lee, an inmate at Coal Township currently serving a life sentence.

There are opportunities for people to volunteer inside correctional institutions during the holidays, and multiple organizations put on programs that offer gifting a toy to an inmate’s child. Some county jails also give gifts to their inmates. Last week, the Dauphin County Prison Board approved close to $3,500 to spend on gift boxes that will include a packaged honey pretzel, a pair of socks and a cookie.

“We did a lot of activities that would help people with their spirits,” said Malik Aziz, who was incarcerated 14 years for drug trafficking. He was released in 1997. While inside, he would orchestrate “Pollyanna” gift exchanges, where inmates assigned each other to give or create a gift from the prison commissary.

Tattoos made by prison artists, who use machines created from beard trimmers and guitar strings, are common gifts, and bags of cookies from the prison commissary are a favorite among inmates.

“We couldn’t spend much more than $10 out of the commissary when we used to exchange the gifts,” said Aziz, who used to also orchestrate inmates carolling in cell blocks. “People really loved it. A lot of them needed it.”

But giving gifts is a violation of prison rules and can result in a charge and punishment against an inmate. The corrections department views gift-giving as “loaning” or “borrowing,” and can be construed as exchanging contraband.

“Technically, we’re not allowed,” said Richie Marra, 55, who is being held at SCI Chester for killing a man in South Philadelphia in 1986. “But for a guy who wants to give another guy a box of donuts or bag of coffee? It means a lot.”

And while prisoners on the inside try to create a holiday-rich environment, prison visitation policies have changed so dramatically in the past few years that family members describe the experience as “dehumanizing.” 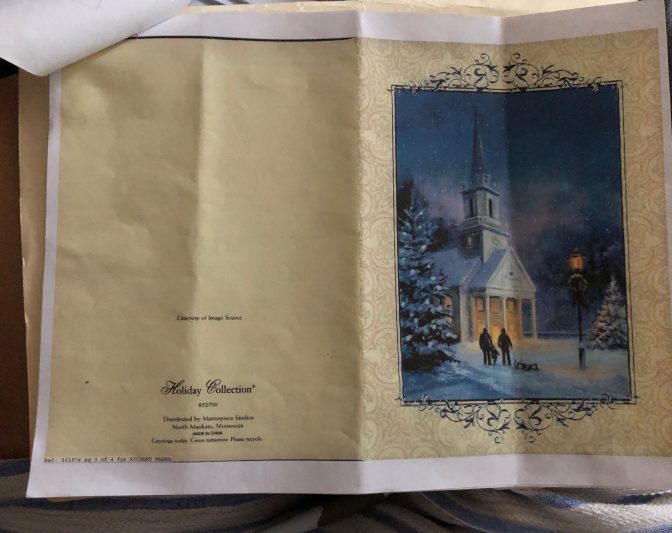 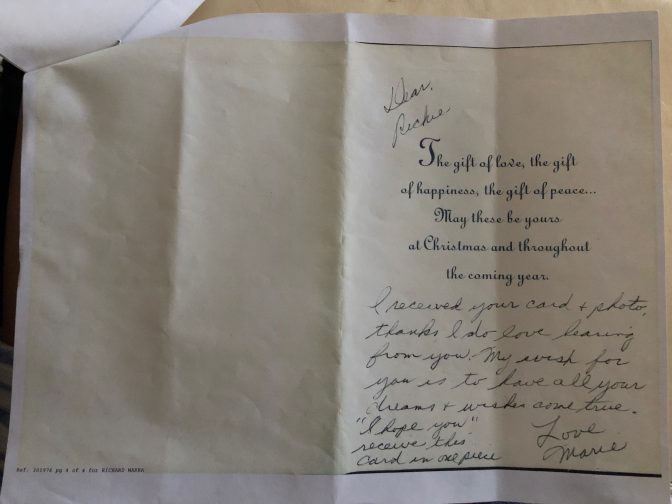 Families say it’s the small things that make a holiday, like sending a Christmas card pictured above. Since the Pa. Department of Corrections changed its mail policy to avoid drug and contraband smuggling, inmates and their loved ones argue it ruins the experience. (Courtesy of Marcie Marra)

Mark Frailey, who works at the Pennsylvania Prison Society organizing volunteers to visit inmates at prisons and jails, said having an intimate moment with family is nearly impossible in some county jails where no contact is allowed.

One of those jails is the Centre County Correctional Facility, where Frailey sends volunteers.

“If you talk about the reasons why people reoffend, and how we keep people out, we know that family connections help,” Frailey said. “That human connection goes a long way.”

A 2011 study done by the Minnesota Department of Corrections found that when corrections staff allowed increased visits and contact with family members, there was a reduction in inmates reoffending.

Centre County’s jail warden, Christopher Schell, said the jail makes exceptions for parents with children under 18 years old, but those inmates must first take a class that can take as long as six weeks. He justified barring contact between inmates and their family saying that in many instances, family is the reason why they’re locked up in the first place.

But even if there is an opportunity for a contact visit, families say that any semblance of normalcy isn’t possible due to restrictive visitation policies.

Marra’s sister, Marcie, remembers fondly eating hot turkey dishes with her brother on Thanksgiving at the prison he was held in.

For years, she had been able to bring food to her brother and spend all day with him (the prisons have extended visiting hours for the holidays).  She, her mother and Richie would sit down together for a meal as any other family would during the holidays. It felt normal, she said.

But last year, the state eliminated hot foods in visiting areas after the department of corrections said some officers became ill from exposure to synthetic drugs, specifically marijuana and suboxone. They suspected visitors were the culprits. Sue McNaughton, spokesperson for the Department of Corrections, would not answer if there was evidence that visitors gave inmates drugs or if drugs were discovered in visiting areas.

The department takes the position that people were likely exchanging narcotics in the common area near the microwave stations, where people would congregate and warm up meals. So, prison officials ordered them removed and restricted vending machine items to those that can be served without cooking.

“Society today, we surround everything around food. You sit down and share a meal,” Marcie said. “Can’t do that anymore. You know, it’s just something else that [the prison] took away to make it dehumanizing.”

Now, instead of a hot turkey dinner to share with her brother, she has a cold, soggy turkey sandwich bought from the vending machine.

Until recently, inmates could receive holiday cards from their families. But another policy change  by the corrections department requires all mail sent to prisoners to be routed through a processing plant in Florida. Items are then photocopied and the originals are destroyed; only the copies go to prisoners.

“I used to send birthday cards or Christmas cards, but I don’t anymore,” said Patricia Vickers, whose son is currently locked up in SCI Rockview. “The prison just seems to prevent any bond. You need family to support you, to have to have some type of reason to come home. You need that kind of connection, but the prison breaks that.”