Courtesy of the Lamb campaign

“Whether it’s through innovation or reform, or fighting corruption or protecting from waste: all those things we do, my entire career has led to a job like this,” Lamb said.

Lamb hopes to replace outgoing Auditor General Eugene DePasquale, who was term-limited and is running for Congress next year. The office is the top fiscal watchdog for the state, with oversight responsibility for everything from state spending to the books of volunteeer fire departments. The seat will likely be the only open stateside contest on the ballot next year, with Attorney General Josh Shapiro and Treasurer Joe Torsella both seeking re-election. 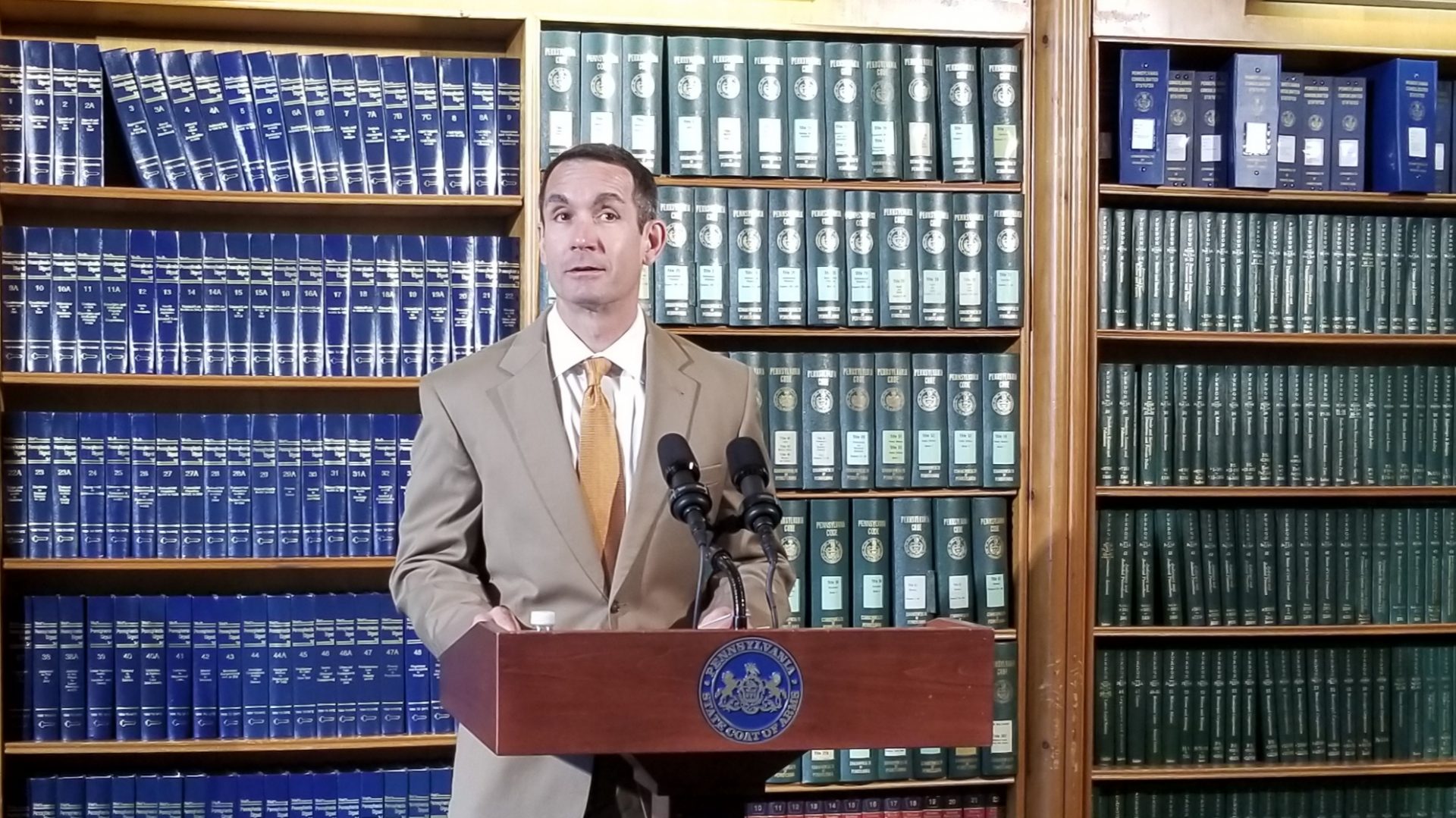 Pennsylvania Auditor General Eugene DePasquale, seen here announcing his office will conduct a “real-time” audit of Harrisburg School District, saw his office’s budget cut by 10 percent this year and lawmakers say it has to do with how he uses his office in ways that stray from its mission.

Lamb has served as Pittsburgh’s city controller for over a decade and was re-elected without opposition earlier this year.

The job of auditor general, he said, is “very similar to the City Controller’s office. It really is the first defense against corruption. … My office has always been in the front line of that kind of fight, but we’ve done it in a way that is not grandstanding.”

Among his top accomplishments as controller, Lamb said, are his fight against a plan put forth by former Mayor Luke Ravenstahl to shore up the city’s pension fund by privatizing the Pittsburgh Parking Authority’s lots. Joining with dissidents on council, Lamb advanced a plan that pledged future parking tax revenues to the pension fund. Since then, he said, “While we still have a very long way to go, we have made a dramatic reversal in the pension trust fund.”

Lamb also boasts of efforts to make often arcane financial and contracting data more accessible to citizens. His office has launched a number of online resources to help residents follow spending, contracting, and lobbying activity within city government. He has often parted ways, albeit in a sometimes low-key fashion, with Pittsburgh Mayor Bill Peduto, and has criticized local intiatives like a recent tax hike to benefit city parks.

Prior to his work as city controller, Lamb was the county’s prothonotary, effectively the clerk for civil courts in Allegheny County. But he supported an overhaul of such so-called “row offices” that turned his post into an administrative, rather than separately elected office, “even though it meant the elimination of my own position,” he said. He also backed a “home rule” charter that replaced the old three-commissioner form of county government with the current executive-and-council structure.

Those reforms, he said, demonstrate “the ability to go against my own party when necessary,” and he speculated that his record of independence would appeal to Republican state legislators who have repeatedly cut the budget for the auditor general.

Still, asked for his priorities if elected, he offered some proposals that will appeal to Democrats. Examining education spending, he said, would be a top priority, especially when it comes to the money school districts must pay to charter schools who enroll students.

“When local school districts are being asked to front as much money as they are … we want to make sure that education is up to a certain standard,” he said. “And right now there just isn’t a lot of accountability in the charter system.”

Lamb enters what is shaping up to be a crowded Democratic field, but he is the only western Pennsylvania Democrat to have launched a campaign so far. Nina Ahmad, a former Philadelphia deputy mayor, and previous Lancaster County Congressional candidate Christina Hartman have already announced their bids. At least one Republican, Lancaster County Commissioner Dennis Stuckey, is also in the running.

Geography may play to Lamb’s advantage: Candidates in primaries are listed along with their home counties, and pundits say western Pennsylvania candidates tend to get a tailwind even from adjoining areas. Lamb said that political geography may help Democrats in November, if he’s the nominee.

He also has some built-in name recognition: He’s the uncle of Congressman Conor Lamb, whose rise in 2018 heartened Democrats in western Pennsylvania and beyond. Lamb notes that his nephew will have his own race to run next year, but said that in the days ahead, “We’re going to do something with public endorsement announcements, and hopefully we can sign him on.”