Nick Haddad, left, watches a captive-bred female St. Francis' satyr butterfly fly off after it was released into the wild at Fort Bragg in North Carolina on Monday, July 29, 2019. Haddad has been studying the rare butterfly for more than 15 years.

What can be saved? Bomb range helps rare butterfly 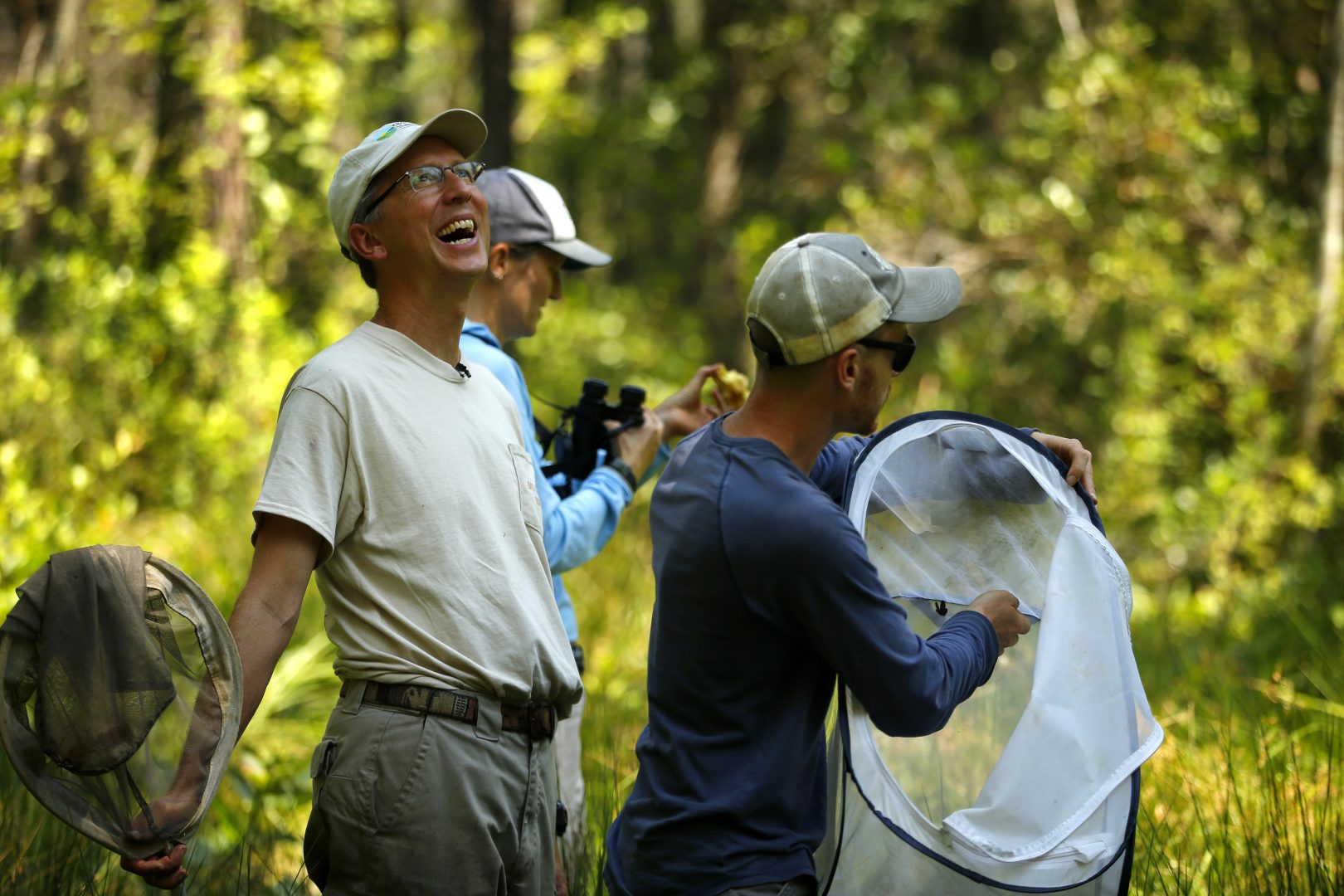 Nick Haddad, left, watches a captive-bred female St. Francis' satyr butterfly fly off after it was released into the wild at Fort Bragg in North Carolina on Monday, July 29, 2019. Haddad has been studying the rare butterfly for more than 15 years.

The tiny St. Francis Satyr butterfly is found in only one place on Earth: on a U.S. military base.

One of the planet’s rarest butterfly species, there are maybe 3,000 St. Francis Satyrs – all at Fort Bragg in North Carolina. They haven’t gone extinct thanks to the Endangered Species Act, but there’s not enough of them to survive without federal protection.

“Of all the places you’d think to see an endangered butterfly, I mean, why would it be this one place?” says Michigan State University biologist Nick Haddad.

The butterfly appears only twice a year for two weeks each time. When it does, Haddad rushes to Fort Bragg and joins a team of Army biologists to count the butterflies and improve their habitat such as installing giant inflatable rubber bladders that mimic beaver dams.

“Because they’re areas where military trains, but there’s also vast areas where the public is not there, there’s no development. And a lot of rare species are actually on military installations,” Ball says.

The St. Francis Satyr is among more than 1,600 U.S. species that have been protected by the Endangered Species Act signed by Republican President Richard Nixon in 1973. The law’s successes are great, but there are many species that linger on the list.

After years of criticisms from conservatives that the endangered species program isn’t working and is too cumbersome for industry and landowners, President Donald Trump’s administration has enacted 33 different reforms.

Among them: a change in the rules for species that are “threatened,” the classification just below endangered. Instead of mandating, in most cases, that they get the same protection as endangered species, the new rules allow for variations. The Trump Administration says that’s better management.

Even putting that aside, the act has its costs. About $3 million was spent to save the St. Francis Satyr butterfly. Another species found at Fort Bragg — the red-cockaded woodpecker — is another case of success but at a cost of $408 million over 19 years.

The small woodpecker was among the first species given federal protection. They live only in longleaf pines, which have been disappearing across the Southeast for more than a century, due to development and suppression of fires.

In the 1980s and 1990s, efforts to save the woodpecker and their trees set off a backlash among landowners who worried about interference on their private property.

Army officials weren’t happy either: They were being told they couldn’t train in many places because of the woodpecker.

“It attracted a lot of attention because it was so contentious,” says Julie Moore, former Fish and Wildlife Service woodpecker official.

But bureaucrats and biologists changed their approach.

Instead of prohibiting work on land the woodpecker needs, Fish and Wildlife Service officials allowed landowners to make some changes as long as they generally didn’t hurt the bird.

The Army was able to resume training on the grounds and officials were convinced to set fires to regularly burn scrub.

The red-cockaded woodpecker may soon fly off the endangered list or, more likely, graduate to the less-protected threatened list.

“In my lifetime, I never thought that I was going to see woodpeckers survive. If it hadn’t been for the Endangered Species Act … they would have been gone from every military installation and every national forest in the United States,” says Moore.

The woodpecker is what’s known as “an umbrella species,” What helps woodpeckers is good for the St. Francis Satyr butterfly and dozens of other vulnerable species.

“Now we’re at a situation where we can see woodpeckers and butterflies together,” says Haddad.