Team owner Bob Nutting, left, shakes hands with Ben Cherington during a news conference where Cherington was introduced as the new general manager of the Pittsburgh Pirates baseball team, Monday, Nov. 18, 2019, in Pittsburgh.

“We need to create an environment at the major league level where players are improving all the time." 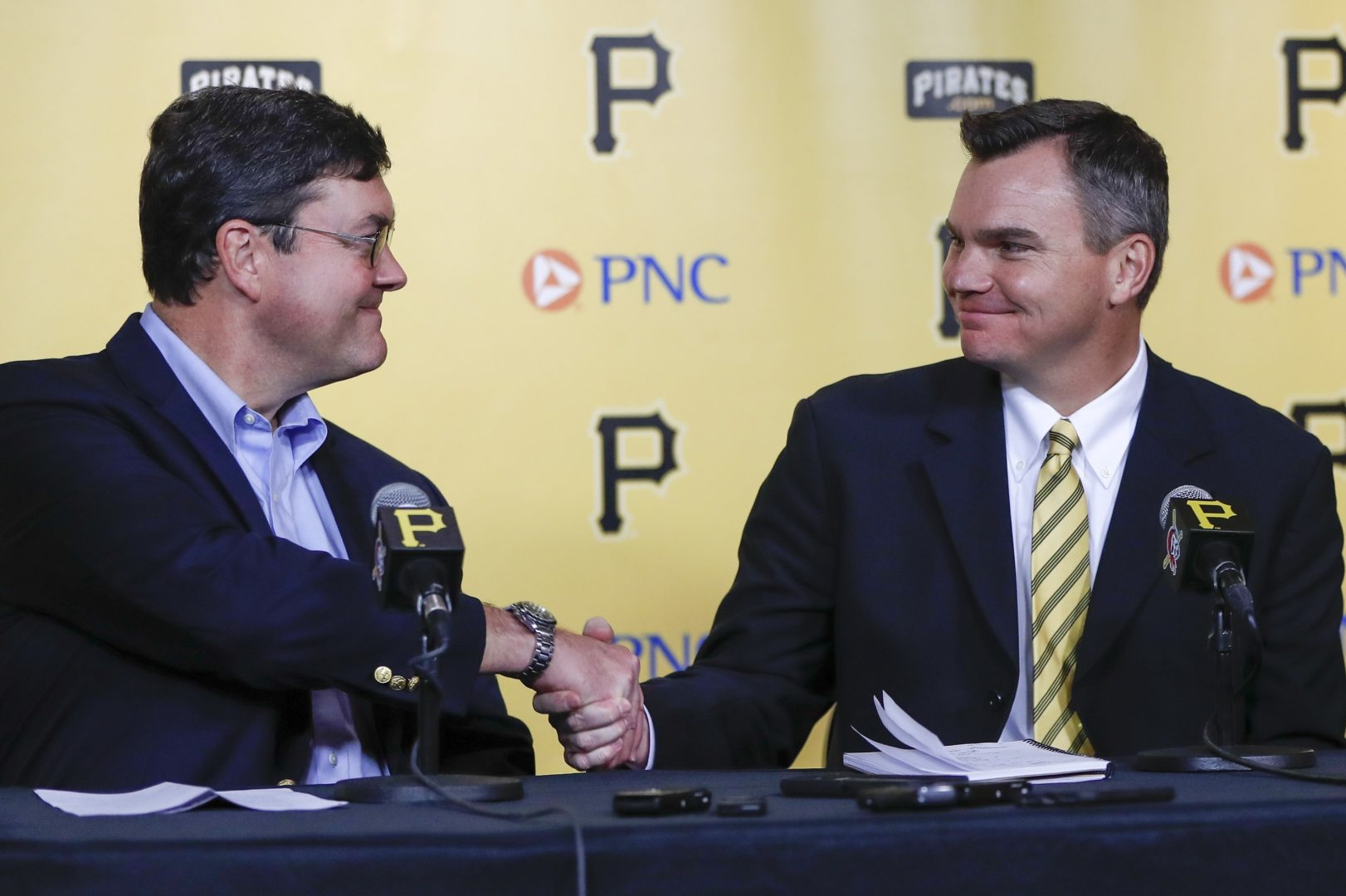 Team owner Bob Nutting, left, shakes hands with Ben Cherington during a news conference where Cherington was introduced as the new general manager of the Pittsburgh Pirates baseball team, Monday, Nov. 18, 2019, in Pittsburgh.

(Pittsburgh) — Ben Cherington earned three World Series rings with the Boston Red Sox, the last as general manager of the 2013 club that raced from worst to first.

The challenge that lies ahead for Cherington with the Pittsburgh Pirates will be different.

The market is smaller. So are the resources Cherington can draw from. The chance to supplement the major league roster with expensive free agents — as Cherington did in Boston — likely will not exist. Yet the 45-year-old does not appear to be intimidated by the financial realities his new job presents. Two decades in the business have taught him that while budgets may vary, the tenets of successful teams do not.

“Obviously the bigger the payroll, it gives you more margin for error on certain types of decisions,” Cherington said Monday, when the Pirates announced he had been hired to succeed Neal Huntington. “But if you peel back in Boston and what really drove winning, I think, in most of the best years was really good work in scouting and development. That’s what we’ll need to do here.”

Cherington will have wide latitude to address those areas in a team coming off a last-place finish in the NL Central. He said he is comfortable the Pirates have what they need to join Tampa Bay and Oakland among teams that thrive with modest payrolls.

“The investment that has been made in areas of scouting, (research and development), infrastructure, is really quite robust and very competitive if not favorable with other teams,” Cherington said. “Those are the things that we’re going to need to be great at. In places similar to this that are winning consistently, those are the things that they’re doing really well.” 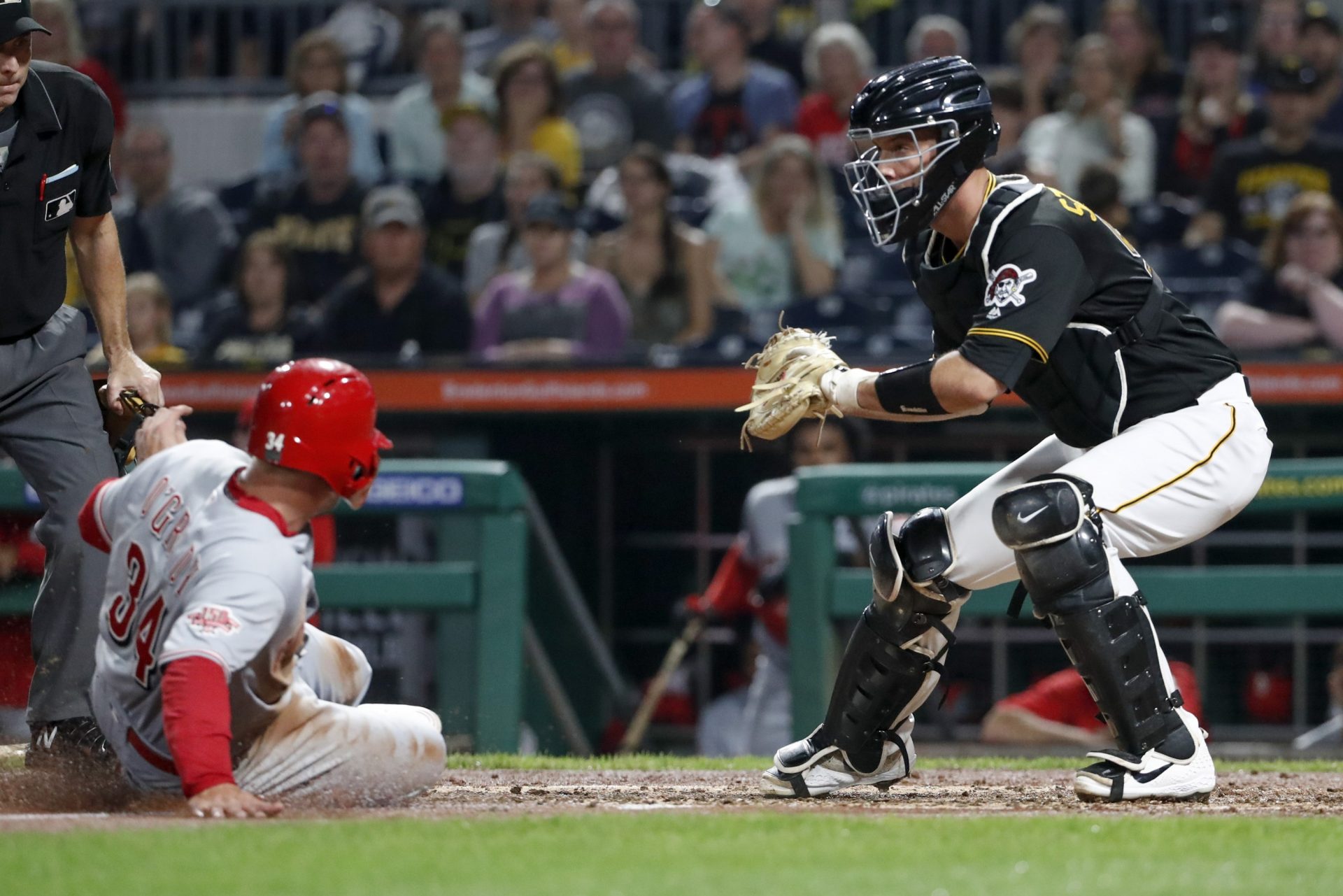 Pittsburgh Pirates catcher Jacob Stallings, right, gets the force out on Cincinnati Reds’ Brian O’Grady at home on a bases loaded ground ball by Aristides Aquino in the third inning of a baseball game, Saturday, Sept. 28, 2019, in Pittsburgh.

Things the Pirates have not done well enough in recent seasons. Huntington oversaw an overhaul that culminated with Pittsburgh reaching the playoffs three straight years from 2013-15 by creating a roster that featured a mix of homegrown talent such as 2013 NL MVP Andrew McCutchen and veterans who revitalized their careers like pitcher A.J. Burnett and catcher Russell Martin.

However, the Pirates have finished below .500 in three of the last four seasons, a period in which high-profile prospects they traded away thrived elsewhere, including pitcher Tyler Glasnow and outfielder Austin Meadows.

Pittsburgh went 69-93 in 2019, the franchise’s worst mark since 2010. The Pirates went 25-48 after the All-Star break, a collapse further marred by separate off-the-field altercations between relievers Keone Kela and Kyle Crick and members of the support staff as well as All-Star closer Felipe Vazquez’s arrest on felony charges stemming from an alleged illegal sexual relationship with a minor.

Nutting parted with Huntington, president Frank Coonelly and manager Clint Hurdle, then decided to bring in Cherington, who spent the last three seasons as vice president of baseball operations for the Toronto Blue Jays

“You have to be honest about the players that are here,” Cherington said. “Some good players are here and in the minor leagues. But we have to add to a lot of wins to that to get where we want to go, which is a winning team.”

Cherington’s first task will be finding a replacement for Hurdle, whose upbeat approach helped the Pirates end 20 decades of losing, a demeanor that became increasingly ineffective as 2019 snowballed out of control. The team interviewed candidates in October, then paused the process after Huntington was fired. Cherington said the club is “off to a really good start” but declined to say whether other candidates will be brought in.

“We need to create an environment at the major league level where players are improving all the time, are put in the best position to perform and we create not just an environment but a group of people that are collaborating together with those players in order to do that,” Cherington said.

Pittsburgh appears to have some solid building blocks. First baseman Josh Bell made his first All-Star team while hitting .277 with 37 home runs and 116 RBIs. Outfielder Bryan Reynolds hit .314 while finishing fourth in NL Rookie of the Year balloting.

Yet the pitching staff is a mess. Ace Jameson Taillon will miss 2020 after Tommy John surgery on his right arm. The team exercised its option on Chris Archer even after Archer went 3-9 with a 5.19 ERA.

“I absolutely want us to rip a bunch of Band-Aids off, take a fresh look at a lot of areas, re-think how we’re doing it, and that’s going to take some time,” Nutting said. “You can’t do that in a week.”