Bill Cobb of Redeemed PA talking with convicted felon Louis Benson, who is registered, about his right to vote in the Defender Association lobby Thursday September 29, 2016. ( DAVID SWANSON / Staff Photographer )

From behind bars to the voting booth

Stories from Pa.’s formerly incarcerated and their journeys to the polls this year

When Kempis Songster walked to his local polling station last week in Lawndale, north of Philadelphia, he was anxious. Songster, 47, had never been inside a polling station. He didn’t know what the ballots would look like, or if he would have to pull levers, press buttons or bubble in circles with a pencil. But he showed up ready to do what he had wanted to for the past 32 years: vote.

When Songster was 15 years old, he and a friend killed another teenager in a Southwest Philadelphia crackhouse. The judge sentenced him to life without parole, which came with losing his right to vote for life. 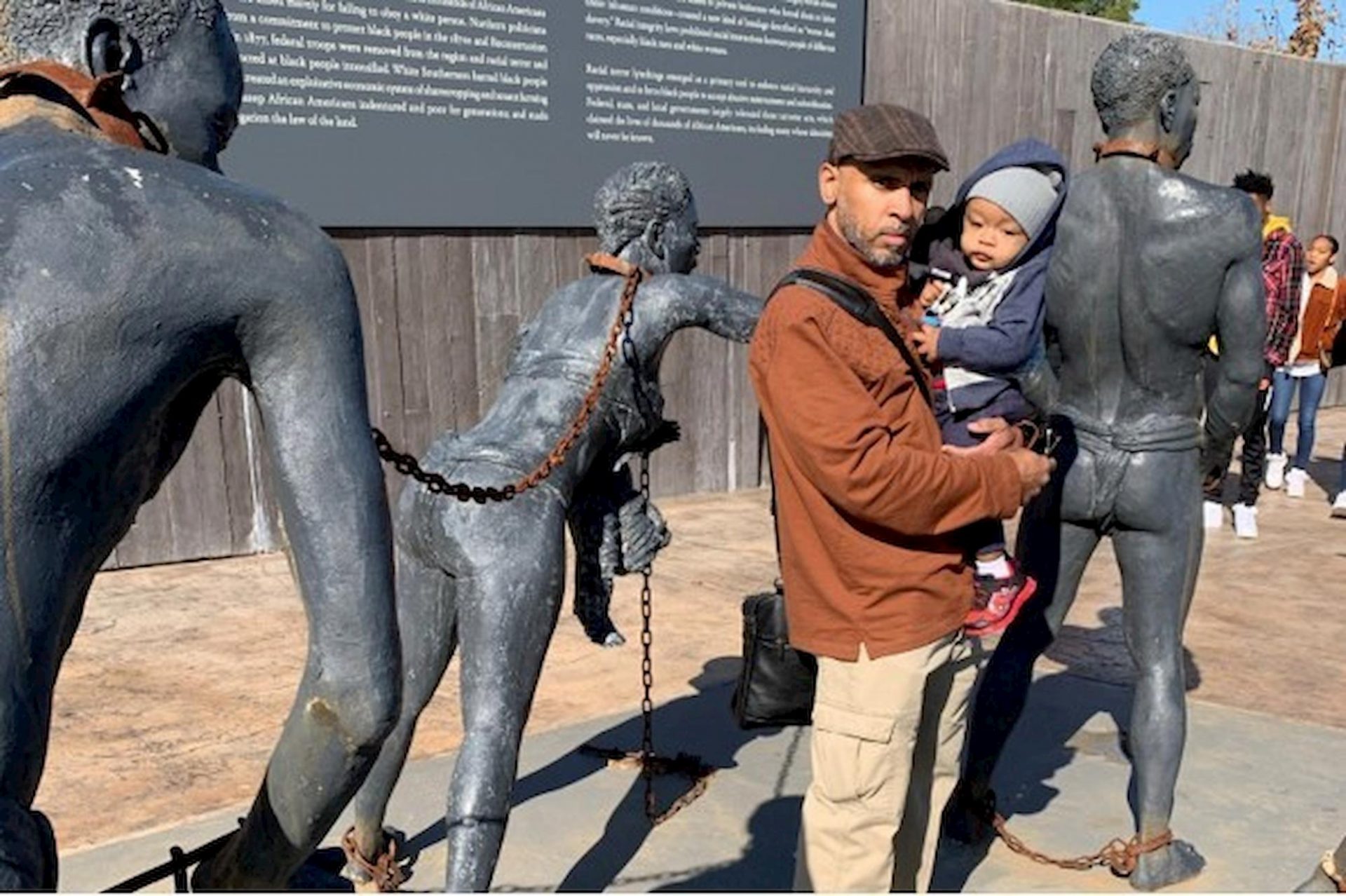 Kempis Songster holds his son as he stands at a work of art depicting the brutality of slavery outside the National Memorial for Peace and Justice in Montgomery, Ala.

“When I learned that I couldn’t vote, I was devastated,” he said, referring to the first time as a teenager he inquired about voting.

Songster didn’t serve a life sentence. The U.S. Supreme Court’s 2012 ruling that juvenile life sentences were unconstitutional ultimately freed Songster in 2017. Only half of those eligible for release in the state are out of prison, but of those who are free, they are now eligible to vote. (Pennsylvania only denies voting rights for those currently serving sentences for a felony conviction.)

As support for criminal justice reform in Pennsylvania and the nation becomes one of the few areas of bipartisan agreement, more former felons like Songster are being released. Since 2016, there have been close to 70,000 former felons let out of state prisons. In Philadelphia, alone, the city tracks close to 300,000 formerly incarcerated people, all of them have the right to vote.

But it’s almost impossible to track if they do. There is no database that logs if people who were once convicted of a felony register to vote or even if they do vote. That work is left up to advocacy groups and their leaders, who say anecdotally that while many know that they can vote, they don’t. Reaching those who don’t know is often taken up by reentry groups who work with ex-felons or, in the cases of those still locked up, getting their family members voting.

These are some of their stories:

‘It was one of the best days I ever experienced’

Jondhi Harrell has a list of over 70,000 names of former felons living in Philadelphia. All he needs to do is go door to door and talk to the people at each house and get them interested in voting.

Simple, he says. Except, there’s no time (or money) to do that.

Harrell runs the The Center for Returning Citizens in North Philadelphia. The organization works with people coming out of prisons or jails to get them jobs, health care and active in their communities, including voting.

In the 1980s, Harrell robbed banks and eventually served 25 years in federal prison. But, he says, he considered himself wise on politics and took on the role of keeping inmates engaged in community issues. That included voter education, he says.

The issue with most former inmates, he says, is not that people aren’t registered to vote – they just don’t care to vote.

“Our forefathers and ancestors struggled and died for the right to vote,” Harrell said, mentioning how he gets people – especially younger black men – invested in voting. “I try to make them look at the process and that they’re disrespecting black people who literally had no share in this country.” 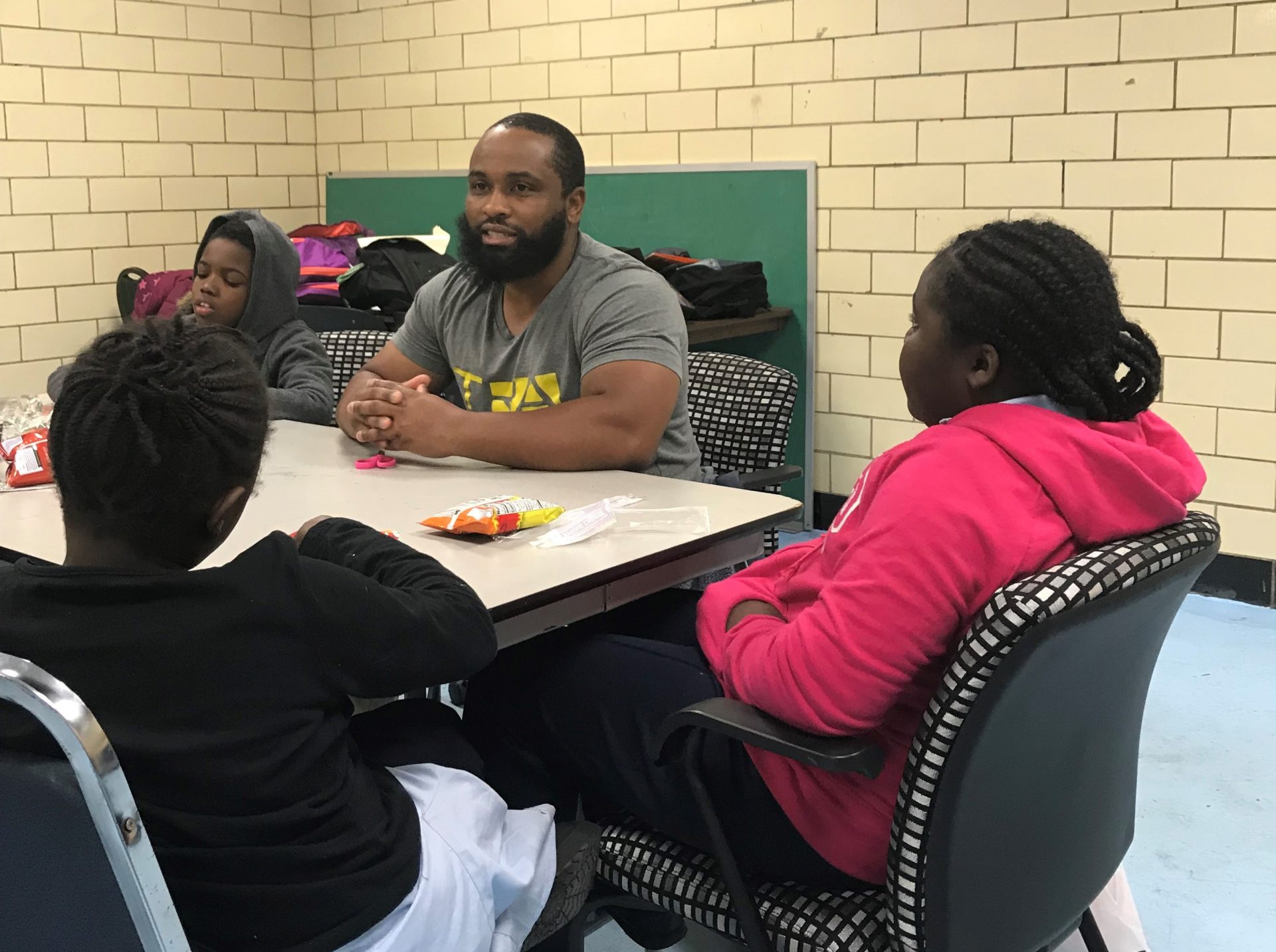 Radee Hammett, center, discusses with students in an after school program about his time incarcerated in West Philly. Through the support of The Center for Returning Citizens, Hammett, 41, voted immediately after his release in 2016.

That approach is what worked for Radee Hammett, 41, who was sentenced to five years in prison for a DUI and marijuana charge. During his intake counseling at the prison, he was told that he would lose the right to vote while incarcerated.

“I felt like I was being silenced,” he said. “If I wanted to express change, that’s how I could express it.”

Hammett was released early after three years, just before the 2016 election. And with Harrell’s help, he was inspired to vote this year. “It was empowering,” he said. “It was one of the best days I ever experienced, next to coming home and seeing my family. Because it was about me expressing myself to my community.”

In high school, William Cobb was enthusiastic about civic engagement. He was active in his student elections and student government. He joined the U.S. Air Force and served in Desert Storm. And when he was old enough to vote, he did. His first vote was 35 years ago for Rev. Jesse Jackson’s 1984 run for the Democratic presidential nomination.

But in 1994, Cobb pleaded guilty to criminal robbery, kidnapping and conspiracy. He was sentenced to 12 years in prison and lost his right to vote. At that time, he knew after he served his time that his voting rights would be returned.

But a year later, the Pennsylvania legislature passed a “motor voter” law, which included a provision that barred ex-felons from registering to vote for five years after their release.

“The entire point of prison is to break your humanity,” Cobb said. “It felt like we weren’t human.”

While locked up, Cobb said he started to notice how not being able to have a say in politics was affecting his daily life. For example, one politician’s election victory could mean the privatization of the food operations in the prison (The state currently has a contract with Aramark Correctional Industries to handle food operations for $154 million.) A vote for a tough-on-crime district attorney meant more people filling the halls, he said.

But not having a say in Bill Clinton’s re-election in 1996 was hardest for many incarcerated felons. The 1994 crime bill – among other things — took away educational improvements in jail, and activists, inmates and even 2020 presidential candidates point to Clinton’s signing of the bill as a primary reason for the over-incarceration of young black men.

“It was a tough on crime bill that was actually a tough on African Americans bill,” said Malik Aziz, founder and chairman of National Exhoodus, which helps formerly incarcerated people register and vote across Pennsylvania. “You could see the prisons filling up. More and more people.” 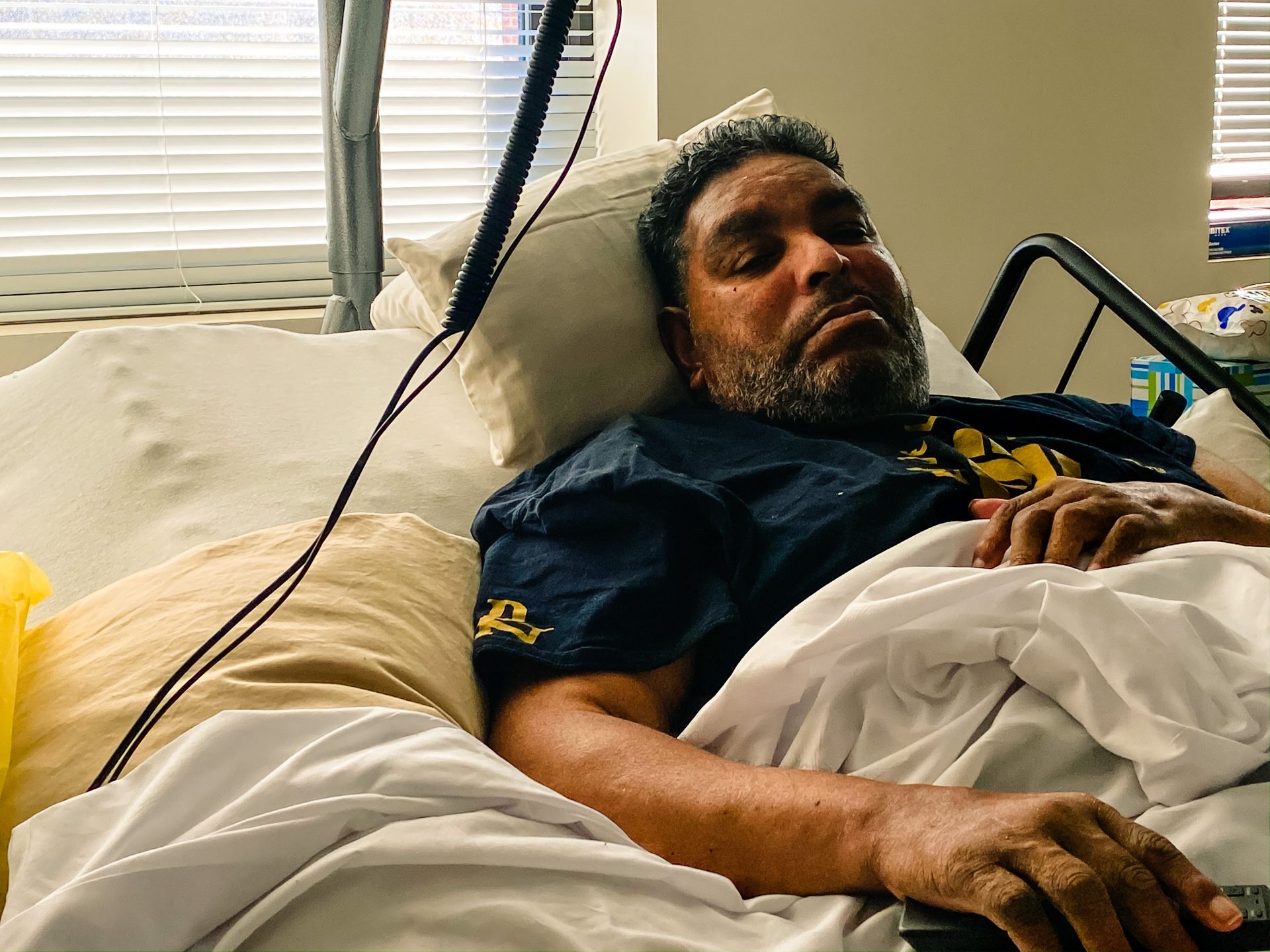 Malik Aziz, 53, in his recovery bed after a surgery. Aziz was successful in 2000 with challenging Pennsylvania’s “motor voter” law that disenfranchised felons for five years after their release from prison.

Before Aziz, 53, was incarcerated in 1989 for drug distribution, he was a military veteran and active voter. He was released in 1997 and found that because he had a felony conviction, he wasn’t able to vote.

“It was dehumanizing,” Aziz said. “If I was working and paying taxes, it was a form of taxation without representation. It warranted enough to go and speak to someone about it.”

Aziz, with the NAACP and five other organizations, sued the state in June 2000. The challenge was successful, with the Commonwealth Court overturning the law the same year.

Since then, he has been active in his organizing to get formerly incarcerated people out voting, noting that if the entire population of people who were formerly imprisoned voted, “that is enough of a bloc alone, we could sway any election in the city.”

“My son’s been in prison for 26 years; He’s the reason why I do this,” said Lorraine “Ms. DeeDee” Haw, whose son Philip Ocampo is serving a life sentence without the possibility of parole in Smithfield outside of Huntingdon, Pennsylvania.

Haw is part of a network of mothers whose children are “lifers” (the term used by inmates for people serving life sentences without the possibility of parole) and who are active in getting engaged in voting because their children can’t. 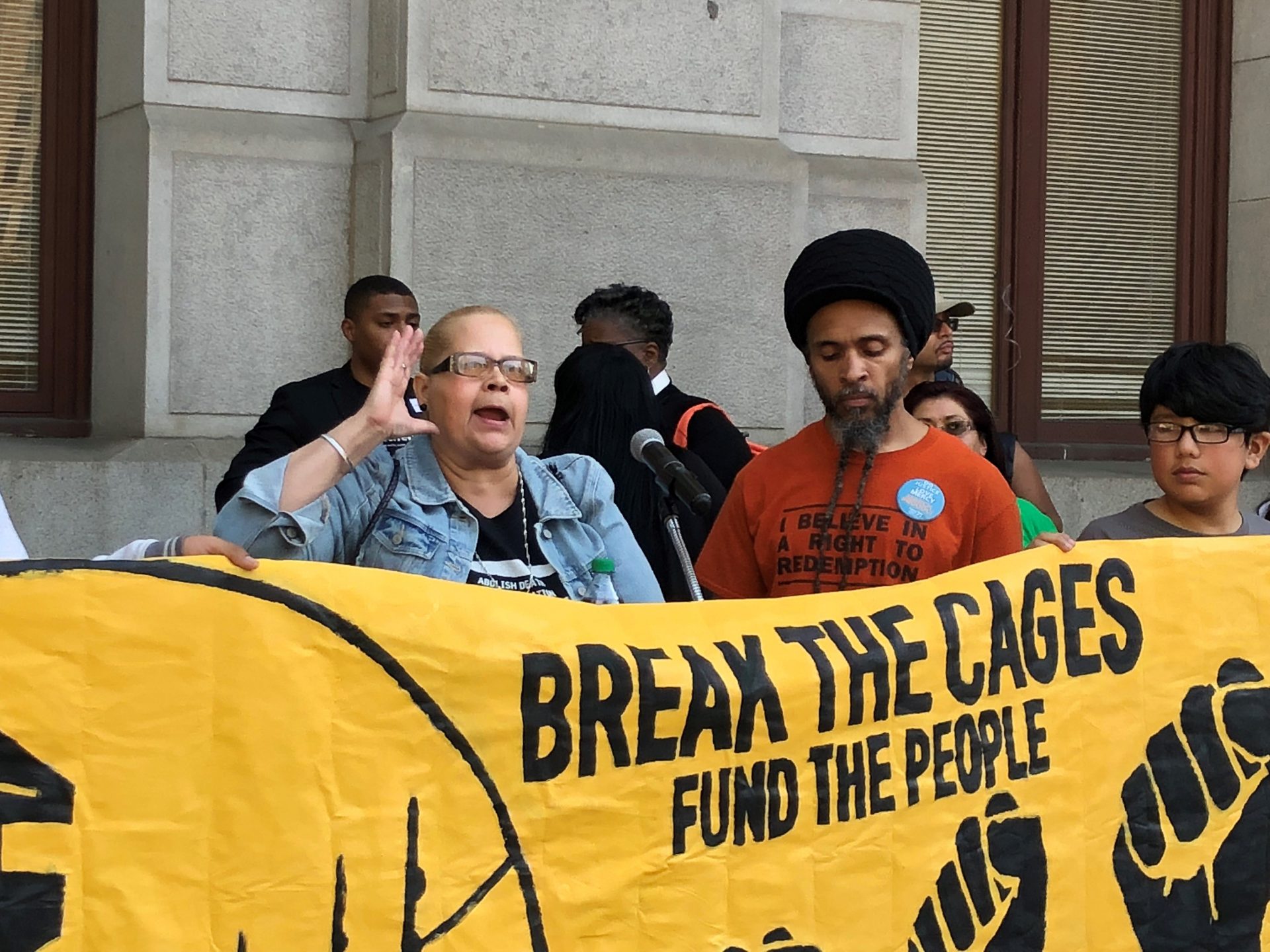 Lorraine Haw protests in support of her son, who is serving a life sentence without parole. Haw is active among a group of mothers organized by Free The Ballot Incarcerated Family’s Network which advocates for prisoners being politically active.

There are more than 5,300 people in Pennsylvania serving life without parole, according to a 2018 report by the Abolitionist Law Center, a criminal justice nonprofit. The state is ranked second in the nation for percentage of inmates with life sentences.

All of those people lose their right to vote.

It’s a problem for prisoners’ rights groups, which have tried to get those incarcerated engaged in politics by talking to their family members about voting for progressive criminal justice candidates.

“You don’t think about things like this until it happens,” said Haw, whose son is represented by a group called Free the Ballot Incarcerated Voter Family Network, a prisoner advocacy group that educates incarcerated felons and their voter-eligible family members about upcoming elections.

“I didn’t know how bad our judicial system was. It took my son to get incarcerated for my eyes to be open,” Haw said.

The group — co-founded by Robert Holbrook, who was formerly incarcerated with a life sentence as a teenager, and community organizer Sean Damon — mails out fliers to inmates in state correctional facilities that inform them about progressive candidates. The fliers, says Damon, are intended to galvanize inmates to discuss campaign platforms with their families on the outside.

The result is a network of people organized and powered by felons who create a powerful voting bloc of people directly impacted by the criminal justice system.

“It’s giving power to these people who we’ve written off, but they’re still people,” said Damon. 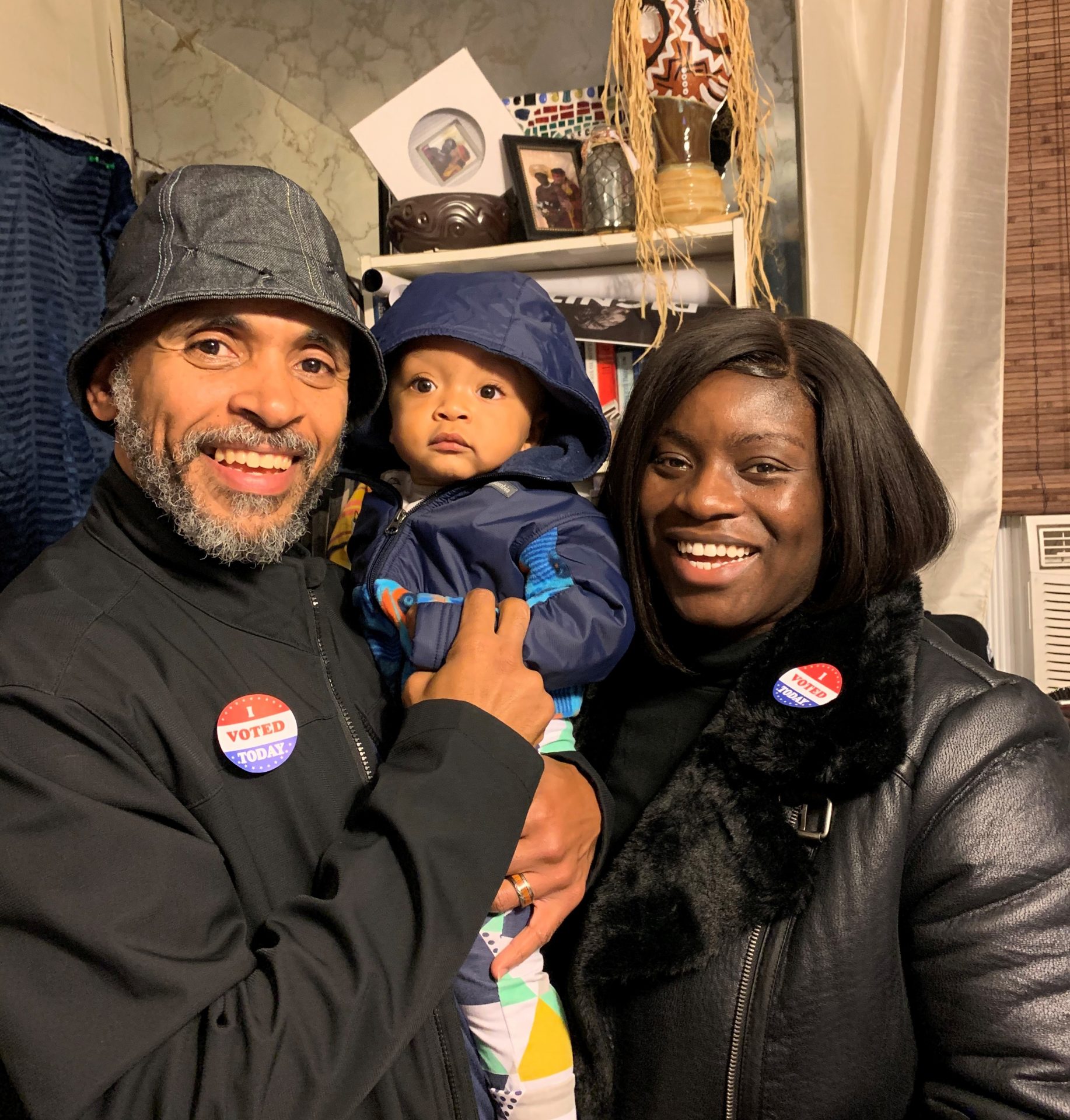 Kempis Songster, 47, left, with his wife and child after voting during last Tuesday’s off year election. Songster was incarcerated for 35 years where he was unable to vote until he was released two year ago.

Free the Ballot is what engaged Songster, who had never voted until this past Tuesday’s election, to get interested in politics on the outside. During the election, he went into the polling booth — with his wife and son waiting outside for him – and he cast his vote. It was an emotional experience, he said.

“I walked out of there and I felt so proud,” he said. “And the planets and stars lined up so perfect on this one, because I knew that everyone I voted for was gonna’ win.”

And they all did.

Editor’s Note: This article was updated to reflect Sean Damon’s role with Free the Ballot.