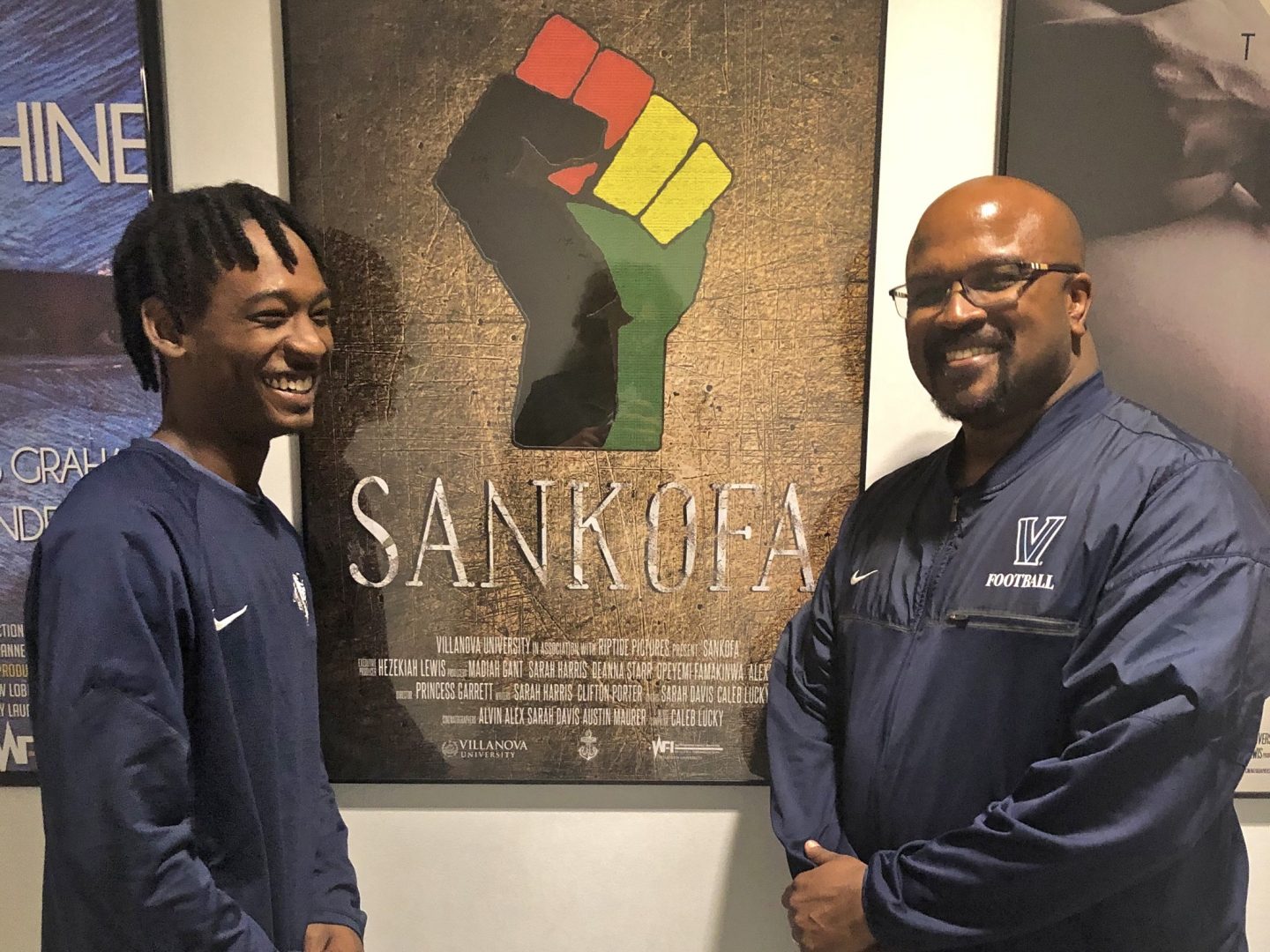 With all the political news going on lately, you may have missed this story: A group of communications students from Villanova University received a gold medal for their documentary at this year’s Student Academy Awards ceremony in Beverly Hills.

Princess Garrett and 20 other students created and produced the documentary “Sankofa,” which tells the story of two young Black men who live worlds apart, yet share so much.

Marcquis Graham lives in Philadelphia and Godsway Anderson lives in Ghana, Africa. The film reveals they are both community leaders and mentors to kids in struggling neighborhoods. And there are deep, historical connections that affect their circumstances in life: colonialism and slavery.

To learn more about this project, filmed in Philly and Ghana, Morning Edition host Jennifer Lynn spoke with filmmaker and Villanova student Caleb Lucky and communications professor Hezekiah Lewis. In the making of the documentary, Lewis prompted his students to “Go back and fetch it,” which is the meaning of the word Sankofa.

Hezekiah: My first time going to Ghana was years ago when I was a graduate. Shooting a film called “Warrior Queen” about an African queen who led an army of men into battle. When I went to Ghana for the first time, I was just so immersed in the culture and the family structure, the community. They always talk about, “Come back home, come back home to really understand where you’re from.” You know, understand where you’re going. A lot of African Americans, we just don’t have that identity. My name is Hezekiah Lewis. I know I’m from the continent somewhere, but due to slavery, it’s all been erased. So going back, for me, was an eye-opener. We have beautiful African kings and queens and a rich history that is not really taught. “Sankofa” is really calling for a lot of Blacks to go back to the continent, to really get a sense of who they are, in order to have more confidence in where they’re going.

Well, let’s get to a clip in the film where we’re hearing from two young Black men who are community leaders. Marquis Graham is in North Philadelphia. Godsway Anderson lives in Ghana. These are their impressions of each other’s cultures.

Godsway Anderson in “Sankofa”: We live here, like, not being rich, like in poverty, all right? But they live a little bit medium, or higher or low. But we are not killing ourselves. We are not shooting each other. There is peace.

Hezekiah, what’s really being said here to firm up a central part of the story of this film?

Hezekiah: There’s so many similarities that we have. I think we have a lot of misconceived notions of who they are as people and they have a lot of misconceived notions of who we are as people. And a lot of that has to do with slavery and colonialism. The first time we went to Ghana and shot a film with the same two gentlemen was called “Rise and Shine.” We talked about the plight of education due to post-traumatic slave syndrome, how it affects the educational system. So here you had a young man who was fighting to build his school up in Strawberry Mansion. There, you had a young man, Godsway, who is fighting to build his school, the Heritage Academy. But looking at the similarities and just the lack of communication we have with each other due to colonialism, due to slavery, we really had to distill a lot of the negative stereotypes. We want this film to build bridges. Looking at it from the Black male perspective in a very poetic way was a very deliberate decision that the students came up with, to make sure that we understand where we need to go.

Caleb, tell me about your part in the genesis of the film.

Caleb: I was actually the only Black male to go on the trip to Ghana. I remember sitting down with [Hezekiah] like sophomore year, freshman year. He was like, “Yeah, man, I want you to come do this class with me. You could play a little music, do your thing.” And then he was, “Yeah, so we’re gonna go to Africa.” And I was like… run that back. Like, we’re going where? It was taught that it’s half-naked people walking around, living in bandos, abandoned buildings. That’s that mindset that I had. So those effects of slavery and colonialism still trickle down to me. Fast forward a year later, and I’m about to go to Ghana. Soon as I step down [off the plane], it’s like this overwhelming feeling of just love. It’s like, wow, I get it. I know what I’ve been missing. I know why there’s this disconnect on both sides, especially in America. Why Black, you know, African-Americans think a certain negative way about Africa. Because it was taught to us that way.

When I was reading about the film before I saw the film, the language that was used to describe it was, “narratives of mental slavery.” Caleb, what is your take on how that rolls out in this film?

Caleb: If we can’t take the slavery out of ourselves, we will never be free. And it’s like that mindset of not allowing this stolen history, this stolen education, our stolen roots to affect how we view and move in society today, right? Because we could easily just take these man-made, racist ideas and apply that to society today, and we’d not even realize it. That’s that idea of mental slavery, not allowing the fluff and the lies of what society has told us to dictate how we live our lives and how we interact with people.

‘One of the greatest places to shoot in the world’: M. Night Shyamalan pushes Pa. to boost film tax credit