Elaine Paul Schaefer (left center), Christine Reuther, and Monica Taylor celebrate their historic win for the 3 open seats on the Delaware County city council. Their win flips the majority on the council for the first time in county history. They celebrated at the Democratic election night party in Swarthmore November 5th 2019.

What led to the blue wave in the Philly suburbs? Demographics, strong candidates and Donald Trump 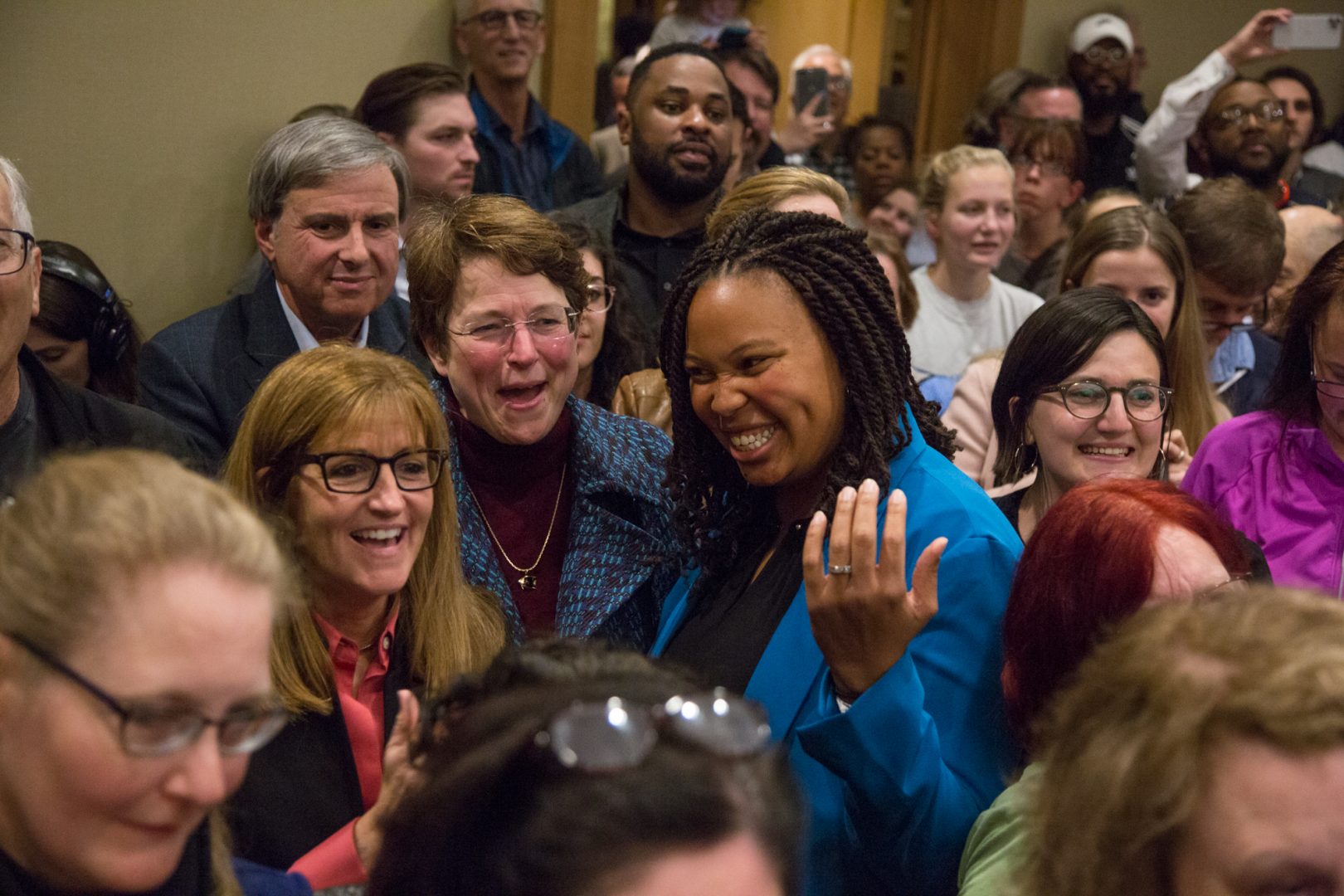 Elaine Paul Schaefer (left center), Christine Reuther, and Monica Taylor celebrate their historic win for the 3 open seats on the Delaware County city council. Their win flips the majority on the council for the first time in county history. They celebrated at the Democratic election night party in Swarthmore November 5th 2019.

Tuesday’s election in the Philadelphia suburbs wasn’t so much a blue wave as a blue tsunami.

Democrats took control of Delaware County politics for the first time since the Civil War, winning all three open seats on the County Council as well as the race for district attorney.

They also made history in Chester County, where Deb Ryan became the first Democrat elected to the District Attorney’s Office. The traditionally Republican county also saw a blue takeover of the Board of Commissioners, where Democrats won majority seats.

And in Bucks County, Democrats took control of county government for the first time in nearly 40 years, winning majority control of the Board of Commissioners and four open county row offices.

What happened, exactly? Was it disaffection with Trump? Demographic changes? Charismatic candidates?

The answer seems to be: all of the above.

“It wasn’t just one of those issues,” said Joe Corrigan, a Democratic strategist who has spent a decade working in suburban Philadelphia politics. “It was sort of a culmination of all of those issues.”

To some extent, he said, the explanation for the Democratic success varies by county. In Delaware County, the party ran strong candidates whose message resonated with voters.

“A lot of this has to do with the work that’s been put in for years and years and years by running really good candidates for local and state offices that show people that Democrats are not the tax-and-spend monsters that Republicans make us out to be,” Corrigan said.

Demographic changes in Delaware County, which over the years has seen an influx of  Philadelphians who moved out because of increased costs of living there, have also influenced the county’s politics. Twenty years ago, there were twice as many Republicans registered there as Democrats. Today, Democrats outnumber Republicans by about 33,000 voters.

In Chester County, Corrigan said, although Republicans still outnumber Democrats, voters there tend to vote along ideological lines. Regardless of party, if they don’t like what they see at the national level, they are going to be more open to the ideas of an opposing party at the local level.

“It’s not 100% that people went out with the intention of kicking Trump between the legs,” Corrigan said. “They went out because the campaigns were good, and that the Democrats were the better party to vote for in this election.”

That said, longtime Republican operative Vince Galko said the political tide in the suburbs has been turning for years.

“In southeast Pennsylvania, Republicans have been hemorrhaging voters for years,” he said, “Mainly at the national and state levels, but it’s finally caught up to us at the local and county level.”

However, Galko cautioned against reading too much into Tuesday’s results when it comes to the 2020 presidential election.

“I don’t think this is a nail in the coffin for President Trump by any means,” he said. “I think he could still win Pennsylvania. I think a lot of it will come down to who he’s running against.”

Corrigan agreed that Tuesday’s Democratic victories are not necessarily a canary in the coal mine for the presidential race.

“The implications that these wins across the collar counties have for 2020 are on State House and State Senate races across the region,” he said.

He pointed to Thomas Killion, a Republican state senator serving the Ninth Senatorial District, which includes parts of Chester and Delaware counties. Killion won a special election in 2016 by less than 3% of the vote.

“That guy has got to be shaking in his boots today,” Corrigan said.

“It’s a little harder sell now to get people to jump in and want to take this on, knowing where the trends are,” he said.

What Galko thinks could make a difference is having Republican candidates talk about what they believe in.

“I think in recent years our message has been, ‘We’re not as bad as you think,’” he said. “We need to be more about what we actually stand for.”

To some extent, the candidates for Delaware County Council tried that, distancing themselves from the county’s Republican Party machine and emphasizing an economic platform and a pledge not to raise taxes.

But Anne Wakabayashi, alumnae director at Emerge America, a nonprofit that recruits and trains women to run for public office, said that message wasn’t enough to resonate with voters who feel the status quo of a Republican-controlled county isn’t working for them.

“I think we’re proving over and over and over again that this isn’t a moment in our politics,” she said. “This is a movement that is changing the way that we do politics.”

She noted that across Pennsylvania there has been an influx of candidates who look different than political candidates of yore: more women, more people of color, more members of the LGBTQ community.

That, she said, could presage a shift at the state and national levels.

“We’re seeing a sustained movement, a sustained change in who is participating in our democracy,” Wakabayashi said. “We’re really expanding the definition of what a leader looks like and what an elected official looks like.”