“It will affect us....We’ve dropped some employees, we’re changing how we’re doing things. But hopefully, we can survive.”

(Kane) — Bo Hammond is hardwood sales manager for Collins Hardwood, a company based in Oregon with locations in Pennsylvania, West Virginia and California. Hammond is giving me a tour of the company’s operations in Kane. It’s located in McKean County off Hardwood Drive.

“This is the main entrance to the plant,” he said. “We actually have a company house on the far backside that one of the owners lived in for years and raised his family here in northwest Pennsylvania.”

Hammond and others like him are feeling the effects of the United States’ trade war with China. And as it trudges on, the concerns are mounting that the consequences for the hardwood industry could last even after the two countries reach a deal.

“So there you’re staring at the head rig. That’s breaking down the log into its initial form. Then it’s going to come over to our resaw and continue to peel boards off down to a certain size,” Hammond explained as we toured operations.

The company has about 118,000 acres in northwest Pennsylvania. It started in 1855. Hammond says they operate sustainably.

“Here at this plant we’re heavy to cherry and soft maple, then hard maple, red oak, ash, a little bit of birch,” he said. “Some white oak, some poplar.”

The market in China has been key to businesses like this one. Its sawmills make industrial products, like railroad ties. But it also produces the wood for cabinets and floors, and much of that product had been going to China. 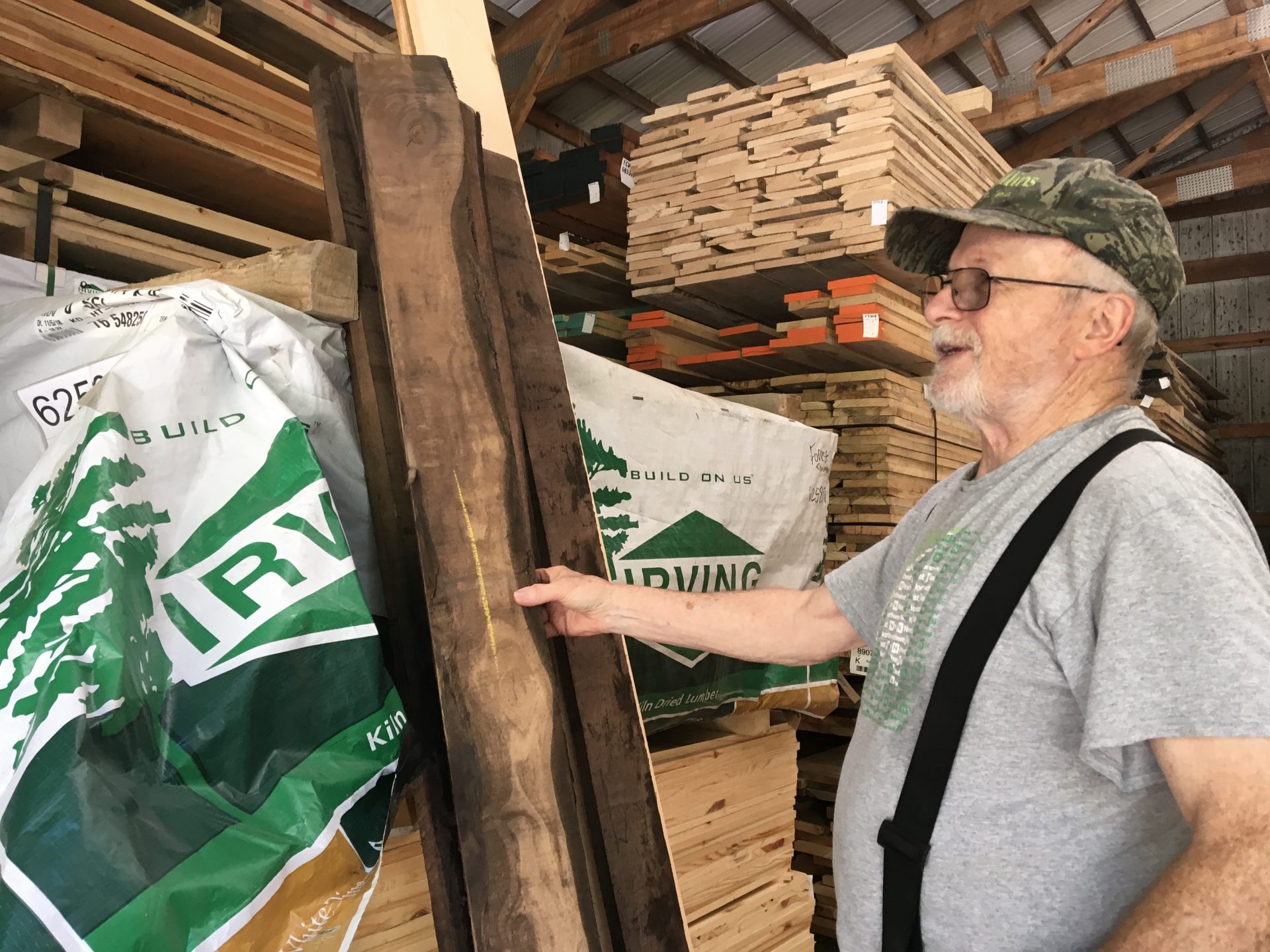 “Speaking not just for us, but as an industry, anywhere from 40 to 60 percent of the product goes overseas, and overseas for the hardwood industry is 90 to 95 percent to China,” Hammond said.

That had been thanks, in part, to a growing middle class in China. It meant a market for hardwoods like red oak and cherry.

But then came the United States’ trade war with China.

“The 25 percent trade tariffs on hardwoods has drastically reduced the amount of hardwood lumber and logs sent to China,” said Michael Jacobson, a professor of forest resources at Penn State.

He said Pennsylvania has some of the best hardwood forests in the world.

“A year ago, everything was great. A lot of our industry depended on exports, and China was the main player,” he said. “As soon as the tariffs hit everything changed.”

According to the American Hardwood Export Council, the United States had 31 percent of the hardwood lumber market share in China in 2017. That has dropped to 18 percent this year. In the year after the tariffs on U.S. hardwoods were announced — between July 2018 nd 2019 — lumber exports to China were down $615 million.

He said Collins is in a good position to adjust to the market. But, most companies are feeling it.

Bo Hammond is hardwood sales manager for Collins Hardwood, a company based in Oregon with locations in Pennsylvania, West Virginia and California. He and others in the industry say they’re feeling the effects of the United States’ trade war with China

“It will affect us, like it has,” Hammond said of the situation. “We’ve dropped some employees, we’re changing how we’re doing things. But hopefully, we can survive.”

Dean Alanko is vice president of sales for Allegheny Wood Products. It has headquarters in Petersburg, West Virginia, and a sawmill and dry kiln in Marble, Pennsylvania.

“This whole new consumption of wood products made with U.S. hardwoods that’s occurred over the past 10 years has been a godsend for our industry,” Alanko said.

As the United States raised its tariffs on Chinese goods, China responded, increasing its tariffs including on American wood. Red oak, for example, faces tariffs of about 25 percent.

“I’ve been doing this for 35 years now,” Alanko said. “This is the most difficult marketplace I’ve played in in those 35 years.”

Alanko said the industry took a beating from 2006 to 2009, when the recession hit. But he said what was different was knowing the economy would get better, and you could see the new market in China. But now things keep getting worse.

“We were staring into the abyss of tariffs and trade war a year ago,” he said. “We’ve fallen so deep into it now, that we stand here as an industry we don’t know what’s going to happen.” 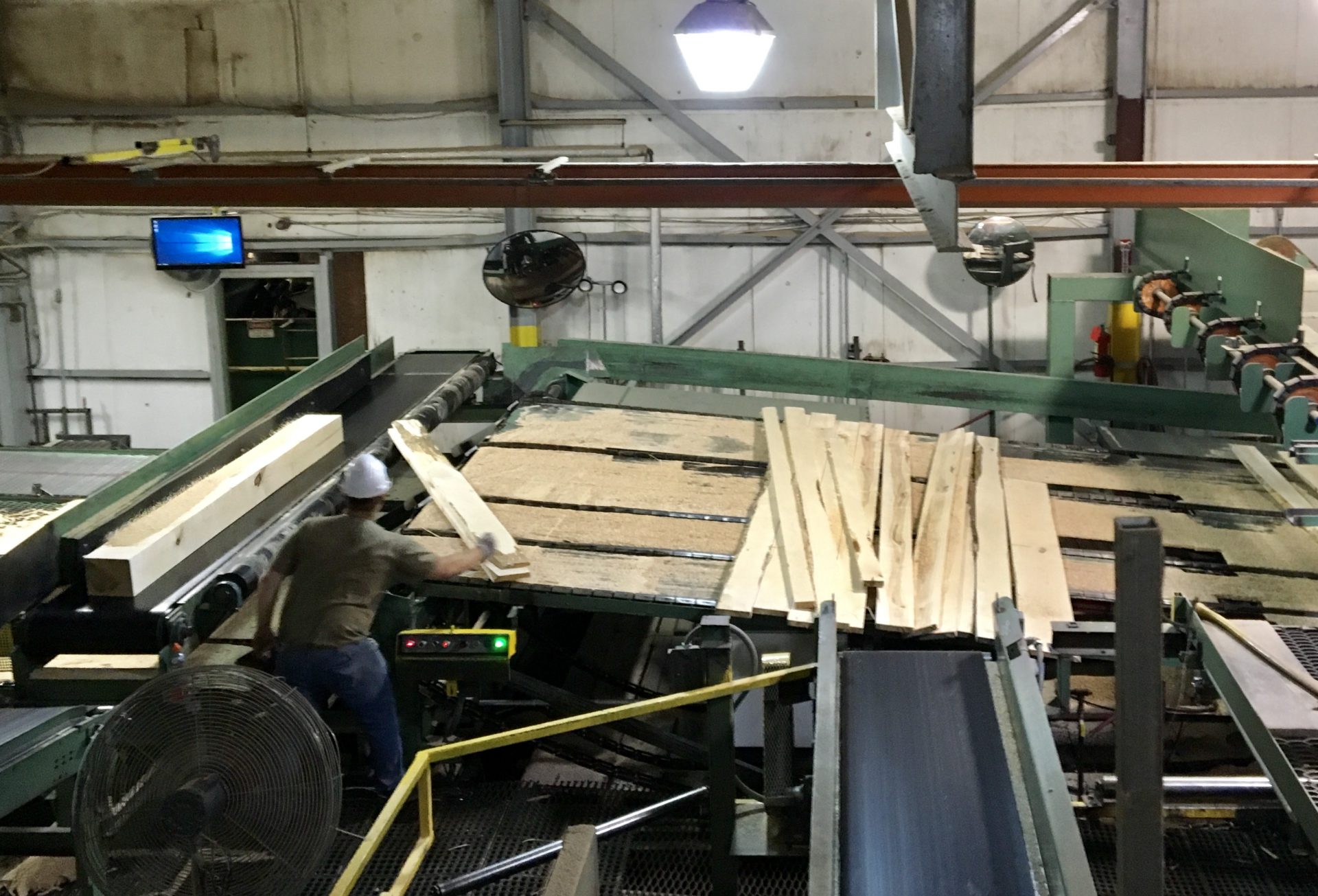 An employee at Collins Hardwood in Kane, Pennsylvania. The uncertainty of trade between China and the United States makes doing business in the hardwood industry more challenging.

He and others said they appreciated seeing the United States take a tougher position on trade with China. But, they weren’t expecting it to continue in this direction.

Dana Lee Cole, executive director of the Hardwood Federation, said about half of hardwood exports coming out of the United States had been going to China.

“It was consuming a lot of wood that we can’t sell here, at very good prices, which also supports the domestic industry,” she said. “It’s gotten pretty desperate for a number of companies.”

Hardwood products accounted for about 63,000 jobs in Pennsylvania in 2016, according to a study commissioned by the federation.

He’s not affected in the same way that companies shipping to China are. But, he said everyone is affected by the uncertainty. “Are we at the bottom? Or are we on a ledge on the way down? Nobody knows yet.”

Penn State Professor Michael Jacobson said he thinks the industry will have to diversify its markets and find other ways to sell its wood.

He and others say when the trade war ends, it doesn’t mean China will immediately go back to buying hardwoods from the United States. It’s already finding other sources including Gabon, a country in Africa, and Russia.