A bag used to secure ballots is seen at the York County elections office on Nov. 6, 2019. 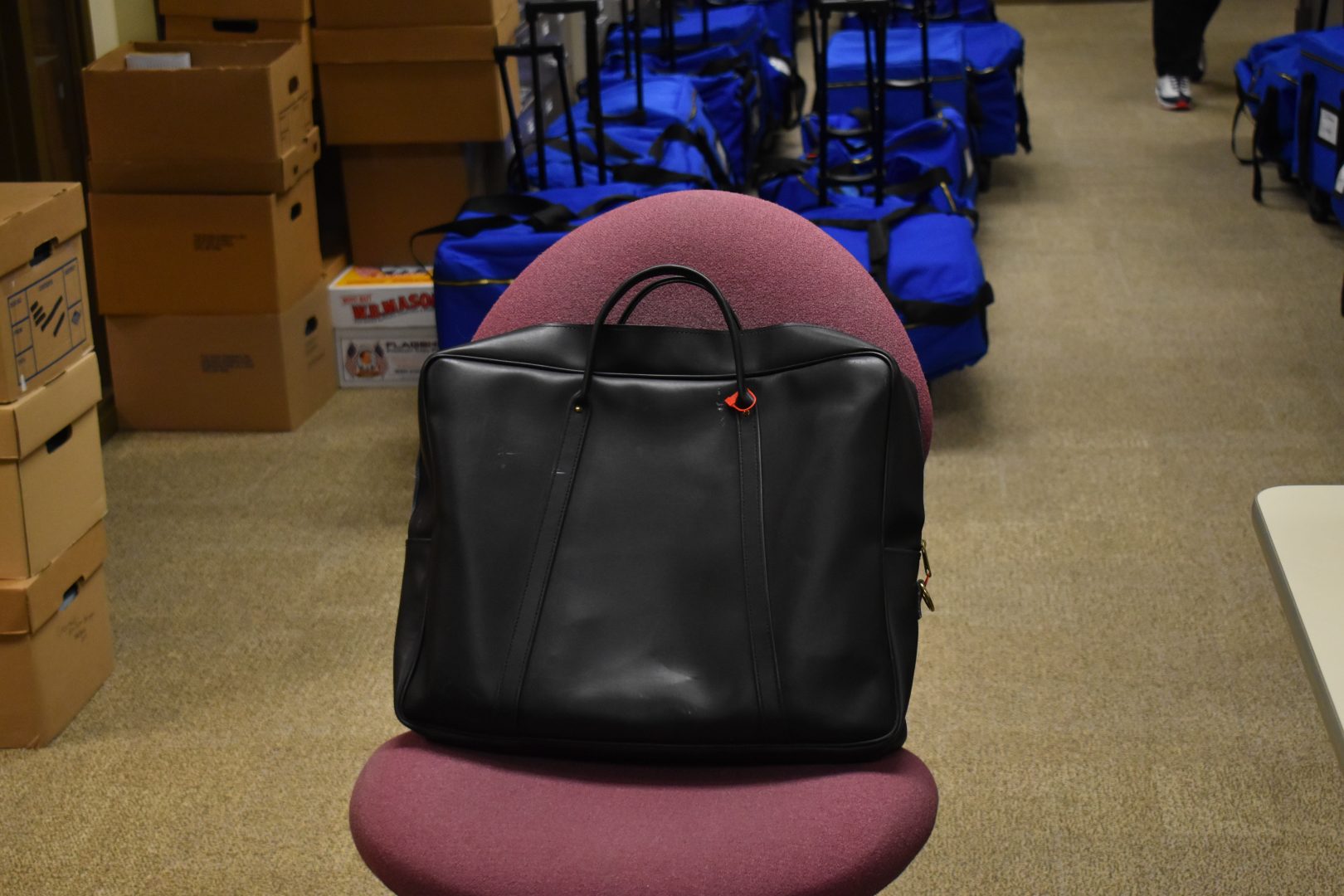 A bag used to secure ballots is seen at the York County elections office on Nov. 6, 2019.

The Republican Party of Pennsylvania, in a press release to announce a hastily convened press conference Tuesday night, charged that Election Day problems at some of York County’s polling places amounted to a “complete breakdown of (the) lawful election process.”

The next morning, an attorney for the county struck a different note, describing the voting problems there as “a little bit of a hiccup.”

By late Wednesday afternoon, both sides appeared to agree that hundreds of ballots that prompted the fight were handled properly by election workers, and county leaders say they are looking into changes they can make to avoid long lines in the 2020 presidential primary and general election.

Susan Byrnes, president of the county’s board of commissioners, said one reason the county rolled out the new machines this week was so to identify any glitches during a low-turnout election. “Come April, we’re going to have our polling places up and running,” Byrnes said. “And it will be smoother than it was this time.” 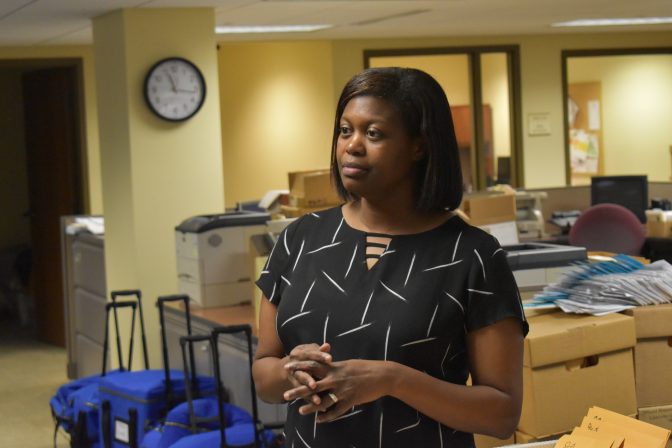 Nikki Suchanic, director of elections for York County, is seen with ballot bags behind her on Nov. 6, 2019.

All 67 counties in Pennsylvania must use voting machines with a voter-verifiable paper record in time for the 2020 primary as part of a legal settlement between Democratic Gov. Tom Wolf’s administration and 2016 Green Party presidential candidate Jill Stein. Dozens of counties introduced new systems Tuesday.

York County, which has about 285,000 registered voters, previously used a touch-screen system. This year, the county approved spending about $1.4 million for new paper-ballot equipment, plus annual software and hardware licensing fees of $147,450.

The system the county bought — manufactured by Dominion Voting Systems — requires voters to fill out paper ballots by hand. Those ballots are then placed an optical scanner. That system made its debut at York County’s 159 polling locations on Tuesday.

Some polling places experienced delays. Ron Smith, who was elected county commissioner Tuesday, said he worked at one polling location where people had about a 15 or 20 minute wait at different points in the day.

At other polling locations, the wait was longer. Commissioner Byrnes described wait times of about 45 minutes or an hour at some spots.

The county said it one optical scanning machine for each of its polling locations wasn’t enough. The time it took voters to feed their ballots into the machines caused the delays.

At one polling place in Fairview Township, hundreds of people filled out ballots but left before scanning them, unable to stay longer or tired of waiting for voters ahead of them to scan their ballots. This caught the attention of the state GOP, which began hearing complaints to its Election Day hotline that the unscanned ballots were being put in a bag.

“That’s when we stepped in and went down to York County,” said Charlie O’Neill, deputy executive director for the Republican Party of Pennsylvania.

In a news release just before 8 p.m. Tuesday, the state GOP announced plans for a news conference in York and said it was taking legal action to ensure the ballots were kept secure and properly counted.

Ahead of the press conference, GOP officials met with Byrnes and the county’s solicitor, Michelle Pokrifka, who said the party’s concerns about the security of unscanned ballots was due to a misunderstanding. 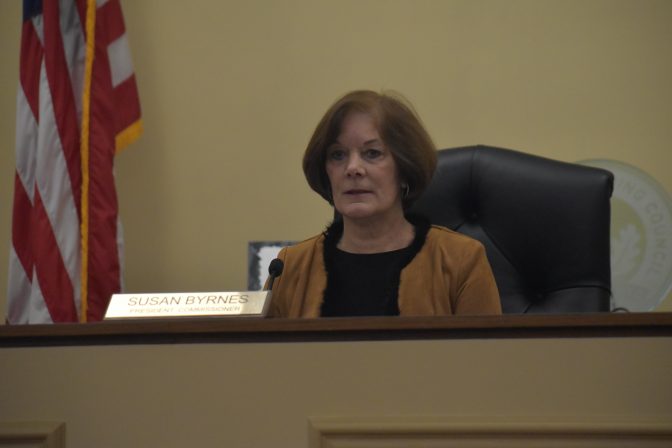 Susan Byrnes, president of the board of commissioners, listens during a meeting on Nov. 6, 2019.

The two sides agreed to a process for how the county would securely count the unscanned ballots. At the Tuesday night news conference outside the courthouse, an attorney for the state GOP said the county agreed to work with the party.

“There’s been chaos today, unfortunately, across the state as a result of the new election voting machines,” said attorney Rebecca Warren. “…This is the county where we received the most complaints.”

While raising concerns about voting in York, Warren also criticized Gov. Tom Wolf for requiring counties to replace the machines.

On Wednesday, O’Neill said the initial news release described “unlawful actions” because that is what was reported in complaints to the party. But he said he’s confident that the unscanned ballots were processed legally.

“Had that stipulation not been in place, I don’t know if I’d be telling you that I thought the law was being followed,” O’Neill said, referring to a written agreement reached between county officials and the GOP over how to process the unscanned ballots.

Mark Walters, a spokesperson for the county, criticized the state GOP for the way it raised concerns with the Election Night new release and news conference.

“This was completely grandstanding. One hundred percent political posturing to make a point and shove it in the governor’s face,” Walters said following the commissioners’ meeting Wednesday.

The county apologized for long lines at the polls, but officials there disputed that the integrity of the election was ever in question.

Pokrifka said that despite the “little bit of a hiccup,” those types of Election Day problems were anticipated.

“I don’t think that they were an unexpected or chaotic situation,” she said. “…And everybody got to vote, so I think our poll workers and our elections department did an excellent job.” 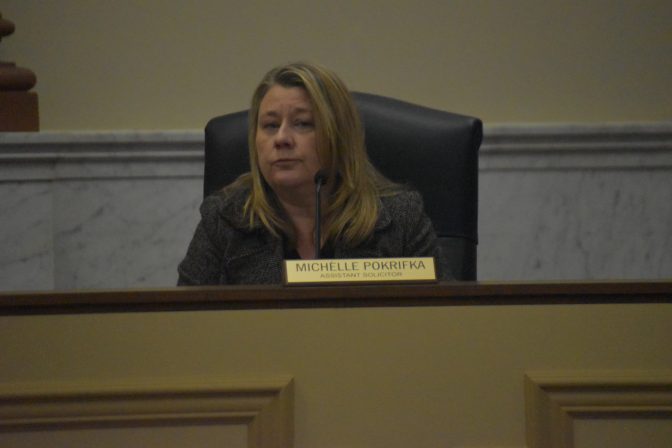 Michelle Pokrifka, solicitor for York County, listens during a board meeting on Nov. 6, 2019.

To ease delays at the polls, Byrnes said the county is considering buying more scanners — at a cost of nearly $5,000 each. And the county might consolidate some of its 159 polling locations into larger facilities that can handle more ballot stations and scanners.

Wanda Murren, a spokesperson for the Department of State,  said the department plans to work with the county on ways to address issues at the polls. She said dozens of counties rolled out new machines Tuesday, and “in the vast majority of them, the voters and poll workers reported a very good election experience.”

She said that even though there were reports of problems in York and Northampton counties, “there is no problem with the paper ballots that they cast.” And she said that underscores the need to switch to new machines that require a paper ballot.