Voting from behind bars: Pa. allows many inmates to vote, but access varies by county 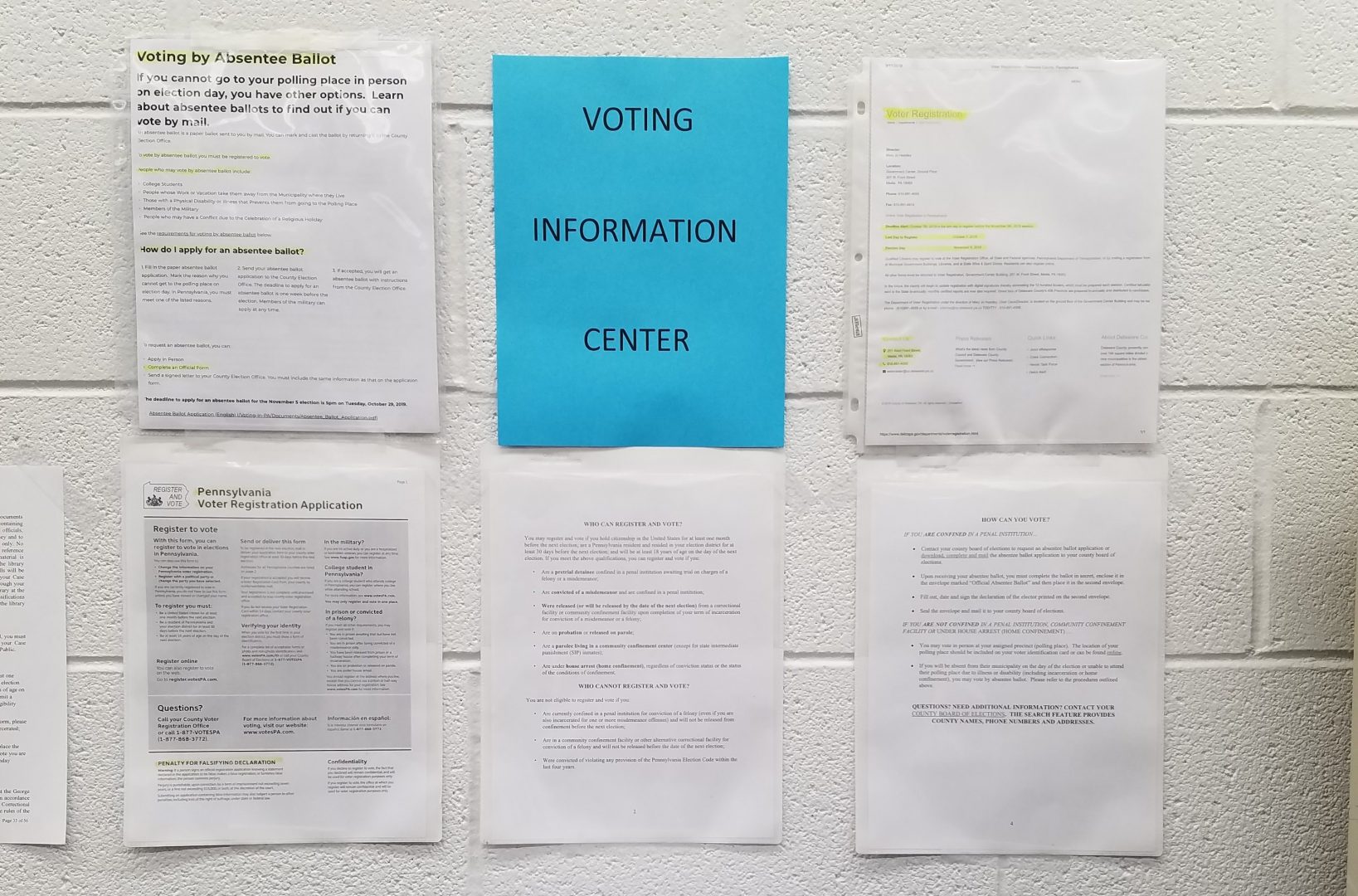 In Pennsylvania, tens of thousands of people confined to county jails for non-violent offenses or who are awaiting trial are eligible to vote. Whether they do is an entirely different question.

Currently, inmates confined to a county jail can apply for an absentee ballot by mailing an application to their county elections board.

But advocates say the current mail-in absentee ballot process is difficult to navigate for anyone serving a jail sentence. And while the new voting reform package signed into law last week by Gov. Tom Wolf stands to make absentee voting even easier for the incarcerated, advocates say there needs to be follow through by county jail administrators.

“The problem is most people don’t know you can vote,” said J. Jondhi Harrell, executive director for The Center for Returning Citizens in Pennsylvania, which does voter registration help for inmates. Even as voter education efforts improve participation among the incarcerated, Harrell said many inmates remain in the dark about their rights.

Some jails in Pennsylvania take it upon themselves to conduct voter registration drives beyond what’s mandated by federal law. Still, Sara Rose, a senior lawyer at the American Civil Liberties Union in Pennsylvania, argued that the biggest roadblock for inmates is to how jails give access to absentee ballot applications.  Federal law only requires that voting be accessible for eligible citizens, but what that looks like and how that’s implemented in a jail is up for debate.

“It would be great to get the wardens to take it upon themselves, but that doesn’t seem to ever happen,” said Rose, who has worked on lawsuits dedicated to expanding voting access to the state’s inmate population.

All county jails in Pennsylvania are required to offer inmates a handbook that includes a section on voting rights. Some detention facilities, like in Delaware and Dauphin counties, place signs about voting rights on walls or in their law libraries.

In other counties, such as Philadelphia and Allegheny, wardens hold voter registration drives and gather absentee ballot forms from inmates at the jail. Administrative staff also go into individual cell blocks and talk to inmates about what’s on the ballot and help assist them with voting, if they need it.

“We feel as though that just because you’re living in a correctional facility, you should be able to exercise your right to vote,” said Orlando Harper, the warden for Allegheny County Jail.

In Philadelphia County, 750 inmates registered to vote in this year’s election, according to Leroy Pendleton, director for the county’s Office of Community Justice and Outreach in the Department of Prisons.

“I’ve been incarcerated multiple times in my life, and not one time has someone brought a voting poll to my jails, or told me how to apply for an absentee ballot, or who was running for what,” said LaTonya Myers, a bail navigator at the Philadelphia Public Defender’s Office, who was confined in Philadelphia County during the 2017 election of Philadelphia District Attorney Larry Krasner.

Bill Cobb, the former deputy director for the ACLU’s Smart on Crime initiative and who was also  incarcerated for six years for a robbery and kidnapping, points out that misinformation on voting is “pervasive,” partially because prisoner voting rights laws are not homogeneous across the nation. Many inmates incorrectly assume they lost their voting privileges, he said.

Pennsylvania’s new voter reform law could indirectly aid inmates with its expanded deadlines for registering to vote and for voting by absentee ballot. And under new absentee voting procedures initiated earlier this year, if someone is confined to a jail the week before an election, that person can request a ballot the Friday before Election Day and has an extra four days to return the ballot.

These are welcome adjustments to the state’s voting laws, according to Aerion Abney with All Voting is Local, a Pittsburgh-based nonpartisan voter organization that works on prisoner suffrage campaigns across the state. But it will come down to the actions at each jail in the state: “While this is a great first step to expanding access to voting by mail, we need to make sure we are holding people accountable,” he said.

Prisoner disenfranchisement is currently a front-and-center issue in the Democratic presidential primary race. Sen. Bernie Sanders of Vermont believes that all prisoners — including felons — have the right to vote. But most of the other candidates seeking the 2020 party nomination fall into the category of liking what Pennsylvania already offers: those with non-violent offenses and former prisoners are allowed to vote.

“Pennsylvania is moving toward the upper echelon of states that really understand it’s not about voter education, but also overall engagement,” said Micah Sims, executive director of Common Cause Pennsylvania, a voting and civil rights group based in Harrisburg. He said that prisoners and those confined in jails have long needed reforms that help them have a more direct pipeline from the cell to the ballot box.