A photo of Marsy Nicholas, the namesake for victim rights legislation that has passed in several states, sits against a chair during a 2013 rally in Santa Ana, Calif. Nicholas was killed in 1983.

The ACLU and other groups had argued the victims’ rights constitutional amendment is too broad and could compromise the rights of the accused. The judge agreed. 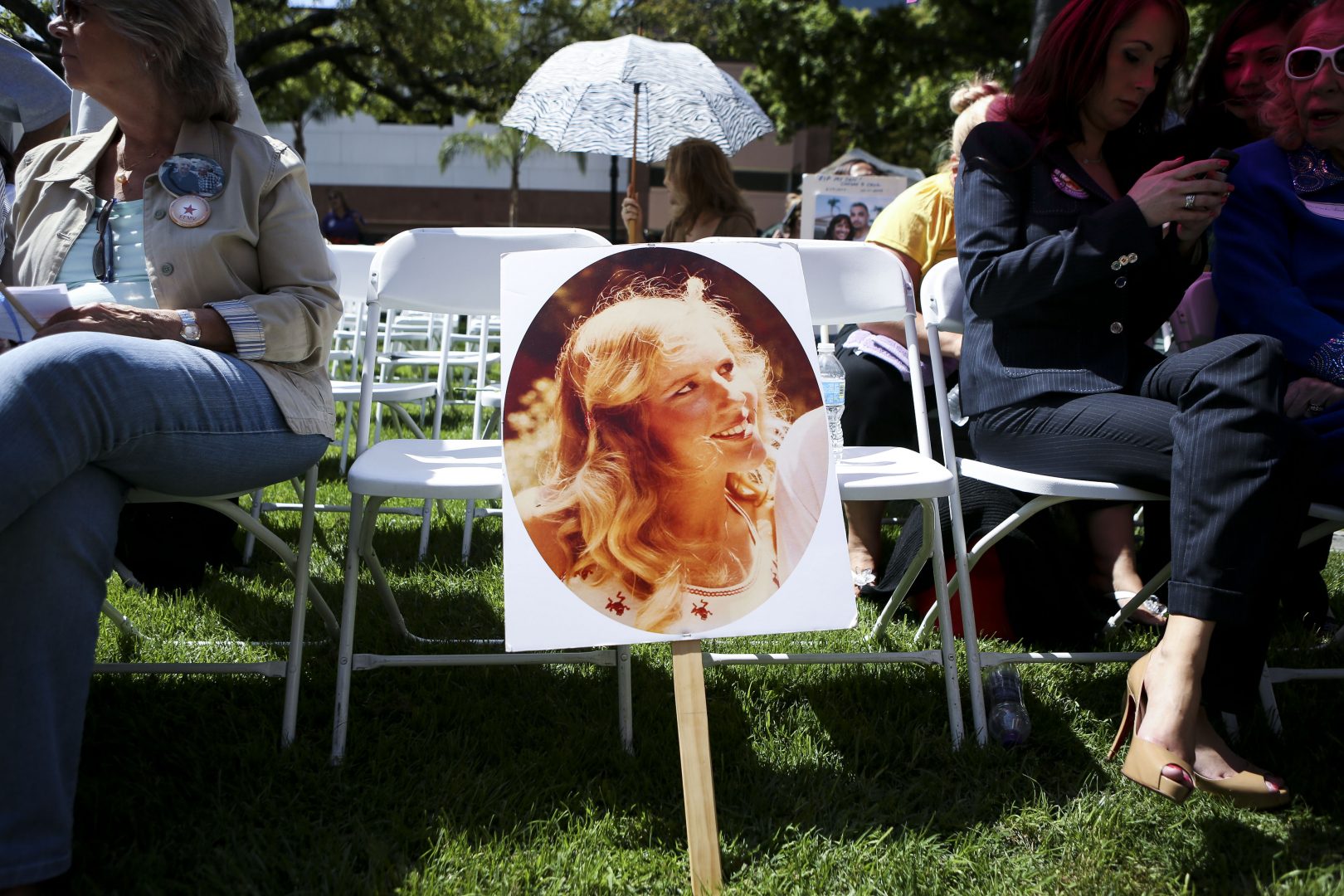 A photo of Marsy Nicholas, the namesake for victim rights legislation that has passed in several states, sits against a chair during a 2013 rally in Santa Ana, Calif. Nicholas was killed in 1983.

(Harrisburg) – The vote on Marsy’s Law will proceed as normal on Nov. 5 — but those votes might never be formally counted.

A Commonwealth Court judge’s preliminary injunction issued Wednesday means the vote won’t be certified until state courts rule whether the amendment is constitutional.

In her decision Wednesday, Judge Ellen Ceisler wrote that it appears “delaying certification of the votes to a constitutional amendment has never occurred” before this.

However, she added, the amendment at hand is also unusual.

“An exhaustive search of Pennsylvania case law reveals no other amendment to a section of the Constitution that was as sweeping in scope as [Marsy’s Law],” she said.

Backers of Marsy’s Law say the amendment — which has been adopted by 12 other states and subsequently overturned in two — would protect the rights of crime victims.

Pennsylvania’s version essentially shifts a package of existing victims’ rights laws from the state’s legal code to the constitution, along with a few additional provisions.

Supporters say that would give victims standing in court and allow them to motion a judge if their constitutional rights are violated.

For instance, under current law, victims already have the right to submit an impact statement at sentencing. But Marsy’s Law backers say if a victim isn’t allowed to submit a statement or isn’t notified that they can, they have little recourse.

Marsy’s Law, they say, would give victims the power to ask that the sentencing hearing be redone in that case.

The American Civil Liberties Union, the League of Women Voters, and a number of criminal defense organizations oppose Marsy’s Law for a few reasons.

The key argument in their lawsuit — which the ACLU filed Oct. 10 on behalf of the League and an individual plaintiff — is that by giving victims so many rights, the makers of the amendment are affecting many sections of the constitution and therefore violating one of its fundamental rules: if the legislature wants to add more than one amendment to the constitution, those changes “shall be voted upon separately” in the subsequent referendum.

The Pennsylvania Department of State, which defended Marsy’s Law in court, argued that the components of the amendment are all united under a common purpose — protecting victims’ rights — and therefore it meets the constitutional standard.

Ceisler agreed with the plaintiffs.

She added that the rights in the amendment aren’t interrelated enough to count as a single subject.

“It is not clear how the proposed right to participate in bail hearings is related to the right to notification of (and participation in) release of the offender or commutation of his sentence,” she said.

Attorneys for the state had also argued that if Ceisler granted a preliminary injunction, voters might be confused and turnout might be depressed, effectively disenfranchising people. Ceisler dismissed that claim as “purely speculative.”

She said voters are much more likely to be disenfranchised if they must vote for an amendment that is insufficiently summarized on the ballot, as she believes Marsy’s Law is.

In order to get a preliminary injunction, attorneys also had to prove Marsy’s could cause immediate and irreparable harm to people accused of crimes by setting up victims’ rights that conflict with theirs.

Ceisler said they succeeded on that count as well.

She wrote that because Marsy’s law would allow victims and other people affected by crimes to invoke an “absolute right” to have their safety, dignity and privacy respected, it’s likely that the accused person’s right to confront witnesses and enforce subpoenas would be curtailed.

“If passed, [Marsy’s Law] would immediately and irreparably hamstring defendants’ rights to have full and effective investigations carried out on their behalf,” she said.

Lawmakers “did not hold a single hearing over two legislative sessions, and they ignored the law in proposing this massive constitutional amendment,” Shuford said. “They knew better, and they should have done better.”

ACLU attorney Mary Catherine Roper said now, she and her fellow lawyers are preparing for appeals from the Department of State.

“Eventually, either the secretary wins and the votes will be counted, or we will win and the vote will never be certified,” she said.

Roper added, even if Marsy’s Law is eventually adopted, she is confident the ACLU has other avenues it can use to try to overturn the amendment.

“There are some things that then, I think, would be challengeable because of the way that they affect defendants’ rights,” she said. “That will be a whole separate kind of litigation.”

Jennifer Riley, who directs Pennsylvania’s chapter of the advocacy group Marsy’s Law for All, said she was disappointed by Ceisler’s decision.

“We maintain our position that the proposed amendment for Marsy’s Law satisfies the single-subject rule, and remain confident that the court will ultimately rule in favor of certifying the election results,” she said in a statement.

After ballots are cast on Election Day, counties will collect and count votes as they would normally, and send them to the Department of State. Under Ceisler’s order, the DOS will not formally tabulate or certify the Marsy’s Law vote until the legal process plays out.