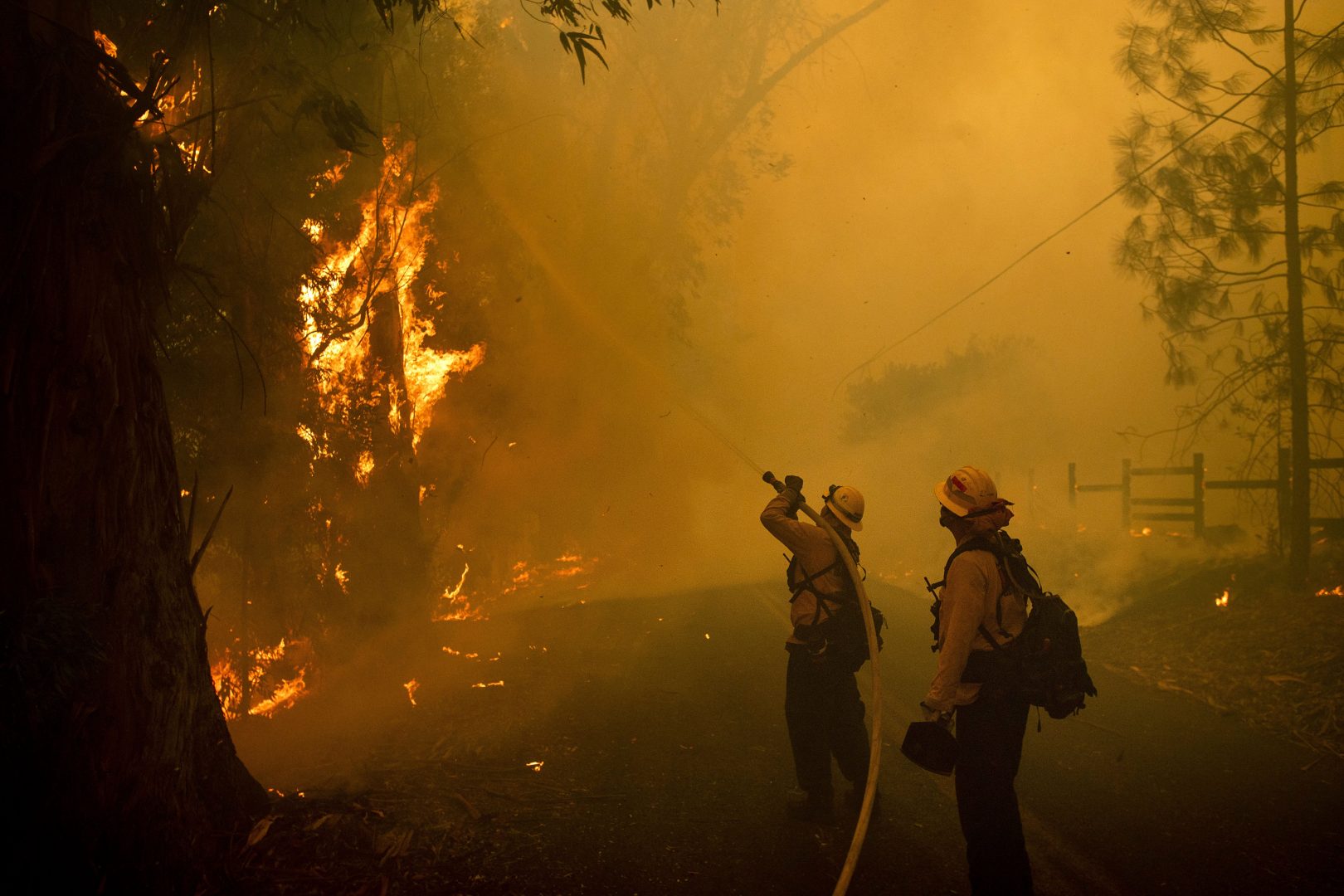 (Santa Rosa, California) — As nearly 200,000 people remain under evacuation order from threat of wildfire, some of the millions of people in Northern California on track to get their electricity back may not have power restored before another possible round of shut-offs and debilitating winds.

Pacific Gas & Electric Co. has notified more than 1.2 million people that they may have their electricity shut off for what could be the third time in a week and the fourth time this month.

Meanwhile, more than 2.4 million people who lost electricity over the weekend were awaiting restoration as hurricane-force winds whipped through the state, fueling a wildfire in Sonoma County as smaller spot fires cropped up.

Fire conditions statewide made California “a tinderbox,” said Jonathan Cox, a spokesman for the California Department of Forestry and Fire Protection. Of the state’s 58 counties, 43 were under red flag warnings for high fire danger Sunday.

Gov. Gavin Newsom declared a state of emergency in response to the wildfires, powered by gusts that reached more than 102 mph (164 kph).

In the San Francisco Bay Area, two grass fires briefly halted traffic on an interstate bridge. The flames came dangerously close to homes in Vallejo. Another grass fire closed a stretch of interstate that cut through the state capital as smoke obstructed drivers.

In the south, a wildfire in the Santa Clarita area near Los Angeles destroyed 18 structures. As of Sunday, the Tick Fire was 70% contained. Early Monday, a brush fire broke out along the west side of Interstate 405, north of Sunset Boulevard and near the Getty Center in Southern California. The Los Angeles Fire Department called the fire “a very dynamic situation due to high winds” and issued mandatory evacuation orders for people living between the freeway and Mandeville Canyon. The Getty itself was designed with fire protection in mind, with thick walls and doors to compartmentalize any flames. Mickey Chizek from Cal Fire helps to evacuate a herd of alpacas as the Kincade Fire approaches their enclosure in Sonoma County, Calif., on Sunday, Oct. 27, 2019.

To prevent power lines from sparking in high winds and setting off more blazes up north, PG&E said Sunday that power is out to 965,000 customers and another 100,000 have lost electricity because of strong gusts, bringing the number of residents impacted by blackouts to nearly 2.7 million people.

The biggest evacuation was in Northern California’s Sonoma County where 180,000 people were told to pack up and leave. Some evacuating early Sunday had done so two years ago, when devastating wildfires swept through Sonoma and Napa and neighboring counties, killing 44 people.

At an evacuation center at Napa Valley College, Francisco Alvarado, 15, said he, two younger brothers and his parents decided to vacate their Calistoga home in advance of evacuation orders. Two years ago, the family had to flee, but in the middle of the night.

“I’m pretty mad that we have to keep evacuating,” he said. “I just want to be home. I’m trying to leave here tomorrow; I want to sleep in my bed.”

He said he wasn’t sure who, if anyone, to blame for the repeated fires, but said he didn’t fault PG&E for turning off the electricity to try to prevent them.

Rosa Schuth of Sebastopol stayed up late packing bags but didn’t think she would need to evacuate because the fires never reached her town in 2017.

She had been asleep for a half hour when she heard sirens telling residents to go. She got in her car and hopped on a country road that became jammed with evacuees.

“The wind is really something. It just rages and suddenly it stops, and you see a bird drifting by,” she said.

Electricity is expected to begin being restored by Monday, though the utility warned it might cut power again as soon as Tuesday because of another forecast of strong winds that are expected to last until Wednesday.

The fear that the winds could blow embers and spread fire across a major highway prompted authorities to expand evacuation orders that covered parts of Santa Rosa, a city of 175,000 that was devastated by wildfire two years ago.

Hundreds of people arrived at the Sonoma County Fairgrounds in Santa Rosa by Sunday. Some came from senior care facilities. More than 300 people slept inside an auditorium filled with cots and wheeled beds. Scores of others stayed in a separate building with their pets.

Among them was Maribel Cruz, 19, who packed up her dog, four cats and fish as soon as she was told to flee her trailer in the town of Windsor, about 60 miles (100 kilometers) north of San Francisco. She also grabbed a neighbor’s cat. “I’m just nervous since I grew up in Windsor,” she said. “I’m hoping the wind cooperates.”

A historic attraction outside Healdsburg was lost Sunday when embers carried by wind sparked a blaze that engulfed the Soda Rock Winery. Buildings included a general store and post office founded in 1869.

In the central California, a tree toppled in strong wind Sunday killed a woman and injured a man who was taken to a hospital, officials said.

In the San Francisco Bay Area, gusts knocked over a 30-foot (9-meter) tree at a farmers’ market in Martinez, injuring nine people, including a toddler. Six people left with injuries that were not life-threatening were taken to a hospital, police said.

During the 2017 fires, winds up to 90 mph (144 kph) lasted for about 12 hours. This time, the gusts were stronger and expected to last more than 36 hours, ending Monday night, said Matt Mehle, a meteorologist with the National Weather Service’s Monterey office.

Parched vegetation from unseasonably hot weather and low humidity was already igniting elsewhere, and firefighters scrambled to keep up.

Two grass fires shut down a 6-mile (10-kilometer) stretch of Interstate 80, including a bridge between the cities of Crockett and Vallejo, and forced the evacuation of 200 people from California State University Maritime Academy. An ember from one fire possibly sparked the other.

Smoke from another grass fire Sunday forced the closure of a stretch of Interstate 80 running through Sacramento’s downtown. Meanwhile, fire officials spotted downed power lines in the area of a small fire that destroyed a building at a tennis club and three other structures in Lafayette, a leafy suburb in the east San Francisco Bay Area.

The city of Vallejo said the power blackout shut off its pumping station needed to access its well water, prompting an emergency. The city barred residents from watering yards and asked people to limit bathing and flushing toilets, reported The Vallejo Times Herald.