Steven Bizare, one of the attorneys challenging Marsy's Law on behalf of the ACLU, speaks to reporters outside the Pennsylvania Judicial Center on Oct. 23, 2019.

Is Marsy’s Law constitutional? A judge will make the first decision soon.

Opponents of the victims’ rights amendment say it’s too broad and would cause “immediate and irreparable harm” to the accused. Marsy’s Law backers firmly disagree. 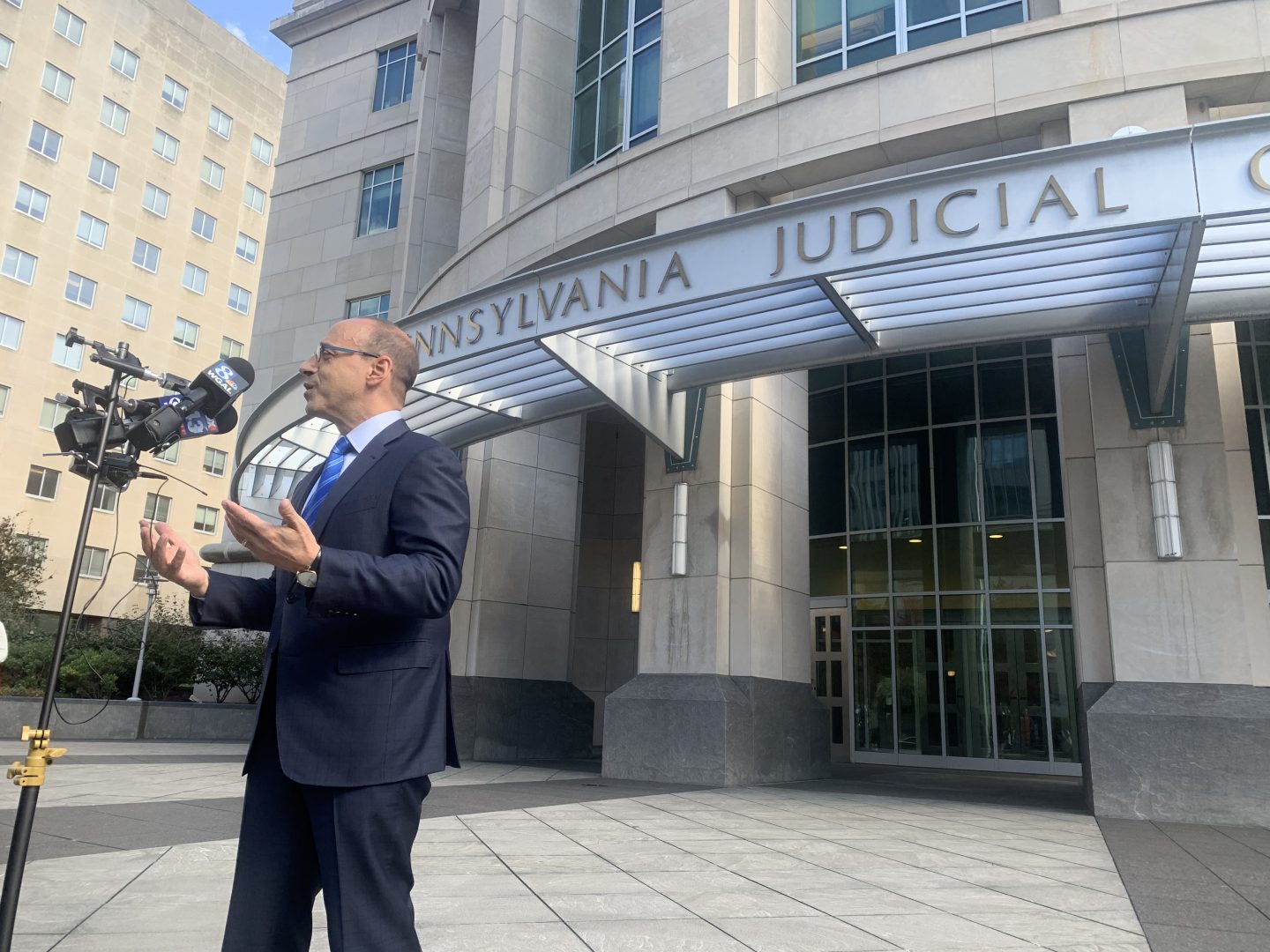 Steven Bizare, one of the attorneys challenging Marsy's Law on behalf of the ACLU, speaks to reporters outside the Pennsylvania Judicial Center on Oct. 23, 2019.

(Harrisburg) – A commonwealth court judge is expected to decide within days whether a broad victims’ rights amendment, known as Marsy’s Law, can go into effect if voters approve it on November 5th, or if it will be frozen until the legal fight over its constitutionality is resolved.

Judge Ellen Ceisler heard arguments Wednesday from attorneys for the American Civil Liberties Union, who filed a lawsuit two weeks ago challenging the proposal on behalf of the League of Women Voters and an individual plaintiff. The suit argues that Marsy’s Law is too broad to pass as a single amendment.

The hearing comes less than two weeks before the language is set to appear on ballots statewide. Absentee ballots carrying the proposed amendment have been distributed, and attorneys for the state estimate around 22,000 people have already submitted their votes.

The plaintiffs in the case maintain that they’re not trying to disrupt the electoral process.

“We recognize money has been spent here,” said Steven Bizar, one of the attorneys arguing the case. “But we believe constitutional rights trump money every time.”

Marsy’s Law, modeled on a California amendment from 2008 and since adopted in 11 states, has been on the ACLU’s radar for a long time. Like all constitutional amendments placed before voters, it already passed the Pennsylvania House and Senate in two consecutive sessions.

Pennsylvania’s version of the amendment would insert an existing set of regulations protecting crime victims into the state constitution, with a few changes.

Crime victims would gain the right to be notified about significant developments in their cases, be present at trial, and submit a victim impact statement before a sentence is handed down.

Backers of Marsy’s Law say that would give victims recourse if those rights are ignored during the criminal process. For instance, a victim would gain the right to ask a judge for a new trial if the victim believes his or her views weren’t heard.

Those changes would be enshrined in Article I of Pennsylvania’s constitution. But Bizar believes the proposed amendment’s language would affect other parts of the constitution (3 articles, 8 sections and a schedule, by his assessment), and he believes the various components of the amendment aren’t united under one goal.

Therefore, he said, it doesn’t meet the definition of a single amendment because it provides “so many different rights.”

His argument is based on Article XI of the state constitution, which says if the legislature wants to submit two or more amendments to the constitution, those changes “shall be voted upon separately” in the subsequent referendum.

What does the state say?

Lawyers for the state spent the bulk of their time in Wednesday’s hearing trying to disprove the broadness claim.

Nicole Boland, a deputy attorney general, said some precedents indicate amendments with multiple parts are acceptable if those parts are all pointed at the same purpose—in this case, giving crime victims more rights.

“Simply because it has parts or semicolons or is bulky doesn’t render it per se unconstitutional,” she said.

The state’s lawyers also argue there aren’t any precedents for a court issuing a preliminary injunction in a case precisely like this one.

Boland also took issue with the timing of the lawsuit. If voters learn that an injunction has been filed, she said, they might get confused and think Marsy’s Law won’t be on the ballot at all. Or they might vote differently, or take the election less seriously and just vote randomly.

A vote held under these circumstances, she said, wouldn’t be trustworthy and would disenfranchise voters.

Judge Ceisler seemed to doubt that many voters are paying such close attention.

“I’m a commonwealth court judge and I didn’t know about this amendment until I was assigned the case,” she said.

In her forthcoming ruling on whether Marsy’s Law should be halted until its constitutionality is determined, Ceisler said she will have to “weigh harms.”

From the state’s perspective, the greater harm would be disenfranchisement of Pennsylvanians who cast ballots without knowing their vote might never be counted, or voters confused by the last-minute developments.

Bizar, meanwhile, tried to make the case that Marsy’s Law would do “immediate and irreparable harms” to people accused of crimes.

The ACLU has long held that Marsy’s Law might jeopardize due process by stripping away longstanding rights of the accused. Ronald Greenblatt, a longtime Philadelphia defense attorney and an intervenor in the case, testified to that effect, pointing to pre-trial discovery as a particular issue.

Marsy’s lets victims refuse requests for information from the accused or anyone acting on their behalf. That can happen under current law, but Greenblatt noted that he has the right to ask a judge to compel a victim to turn over the information. He said he’s worried if the victim has a constitutional right not to give information, at least some judges won’t issue those orders.

He brought up a hypothetical case in which a person is accused of assaulting a police officer.

“Suppose,” he said, “your client said to you, ‘Look, I didn’t start it with this police officer, he came up to me and assaulted me.’ We’re allowed under the current case law and our right to present a defense to go and see if there’s been any prior complaints against that officer.”

Marsy’s Law, he said, “would abridge that right.”

Bizar said pre-trial discovery isn’t the only area of concern.

The actual language of Marsy’s Law regarding pre-trial discovery says that a victim can “refuse an interview, deposition or other discovery request made by the accused or any person acting on behalf of the accused.”

Supporters of the amendment maintain it would never be interpreted to mean judges can’t issue court orders in the interest of discovery.

“We don’t have any case law to support this speculation,” said Jennifer Riley, the state director for the Marsy’s Law initiative. “Please remember, this is coming from a criminal defense attorney who I think would probably be happy if victims never stepped foot in a courtroom.”

It is currently not the norm in Pennsylvania to allow the accused or their attorneys to contact alleged crime victims directly. But Riley said they included the right to refusal in Marsy’s Law because other states have had issues with victims being stalked or harassed during the discovery process.

Judge Ceisler said she aims to release an order on the case within a few days, and a full opinion in a week or so.

If she rules in favor of the plaintiffs, the state will almost certainly appeal to a higher court for reconsideration. If the legal fight isn’t resolved before November 5, the vote on Marsy’s Law will proceed as scheduled, but the amendment won’t take effect until appeals are exhausted and the courts have ruled finally on whether it is constitutional.

If Ceisler rules in the state’s favor, Bizar said he and his fellow attorneys will appeal the case until it reaches Pennsylvania’s Supreme Court.