Stickers for voters are seen on a table at a polling station Tuesday, April 26, 2016 in Wayne, Pa. 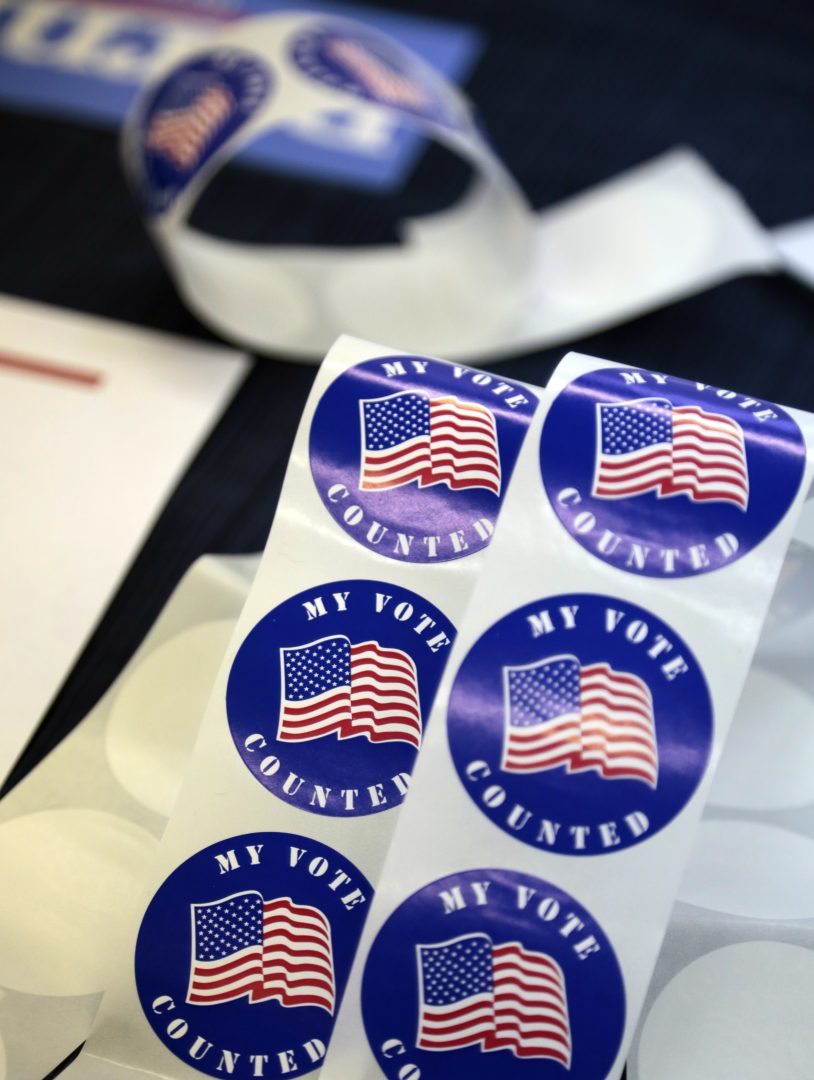 Stickers for voters are seen on a table at a polling station Tuesday, April 26, 2016 in Wayne, Pa.

This story was updated to correct the day of the vote. It was Tuesday, not Wednesday.

But the changes — including no-excuse absentee voting and extended deadlines to submit ballots — was not enough to appeal to most Democrats on the House State Government Committee, which approved the amendments with a 17-8 vote that was pretty much on party lines, with just two Democrats voting in favor of them.

The other eight cited the straight-ticket voting elimination (the bill’s sole, original purpose) as the reason for their opposition.

It also was the reason Gov. Tom Wolf vetoed similar legislation last summer. But Wolf’s spokesman said Wednesday the governor now views the amended bill as a compromise that would get badly needed changes enacted.

Pam DeLissio, who represents parts of Philadelphia and Montgomery County, was one of the Democrats who voted in favor of the amendments.

She says the added reforms designed to loosen the state’s strict requirements on voting would make up for potential delays at the polls caused by eliminating straight-ticket voting.

DeLissio says the loosening of absentee ballot rules will let more people vote ahead of time, cutting down on lines at the polls on Election Day.

But Democratic State Rep. Malcom Kenyatta says eliminating straight-ticket voting will exacerbate further delays already anticipated from the introduction of new voting machines – and that voters at precincts in his Philadelphia district already have waited as long as 40 minutes to cast their ballots in past elections.

“We’re making this process more difficult,” Kenyatta said. “We’re ignoring the cultural concerns of people who have voted in that way for years and years and years. And we’re doing it all at a time when we are changing the entire voting system, which is going to lead to lines lead to delays – and, actually, maybe lead to people not exercising their right to vote.”

“Imagine you’re a voter in a crowded precinct, and you feel the pressure of the long line behind you. And you feel everyone looking at you saying, ‘Just press one button and get out of here.’ Isn’t that disenfranchising that voter’s ability or that voter’s desire, perhaps to choose the individuals who they believe in?” Gabler said. “I think that this gives voters the opportunity not to be coerced into taking a shortcut, but to actually give them the opportunity to vote as they intend.”

Legislators anticipate adding provisions to the measure next week – including authorizing $90 million to partly repay counties for the costs to upgrade voting systems.

House GOP spokesman Mike Straub says the money would come from a bond issuance through the Pennsylvania Economic Development Financing Authority, with the funding disbursed by the Department of State to counties. PEDFA bylaws don’t allow borrowing on behalf of state departments – but Straub notes there have been past exceptions for bonding approved by the legislature.

One reform to campaign finance rules got the attention of members of the news media. Under the proposed change, campaign expense vouchers would be kept by a committee or candidate for three years and subject to public inspection for a fee. In effect, the change would remove campaign spending receipts from the state’s existing Right to Know system and potentially force journalists and the public to go to court to force elected officials to release the information.

Committee Chairman Garth Everett, R-Union/Lycoming, noted a story published Tuesday by Spotlight PA and The Caucus when he mentioned the campaign finance provision during Wednesday’s hearing. Afterward, Everett says he wasn’t explicitly told the story – which showed lawmakers failed to disclose $3.5 million in spending as required – prompted the provision, but assumed so after he read the story Wednesday morning.