FILE- In this Jan. 3, 2019, file photo a cashier returns a credit card and a receipt at a McDonald's window, where signage for job openings are displayed in Atlantic Highlands, N.J. On Tuesday, Feb. 12, the Labor Department reports on job openings and labor turnover for December. 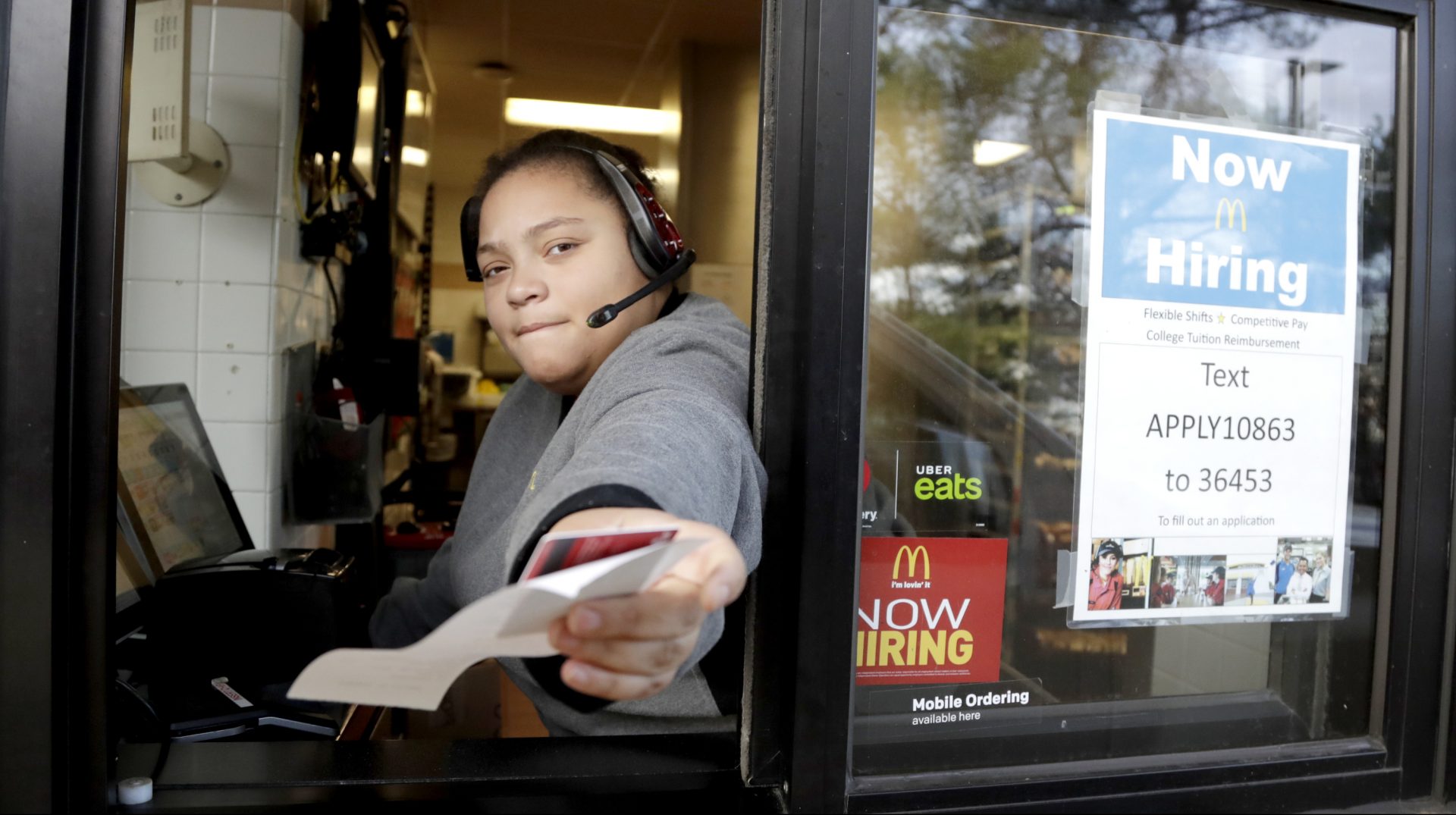 FILE- In this Jan. 3, 2019, file photo a cashier returns a credit card and a receipt at a McDonald's window, where signage for job openings are displayed in Atlantic Highlands, N.J. On Tuesday, Feb. 12, the Labor Department reports on job openings and labor turnover for December.

(Harrisburg) — Gov. Tom Wolf is scaling back a proposal to extend overtime pay eligibility to thousands of workers in Pennsylvania, and his administration on Thursday put it on a path to a vote within weeks over the protests of business groups.

Wolf’s administration submitted its proposed regulation to the agenda for a state rule-making board’s Nov. 21 meeting. The five-member Independent Regulatory Review Commission has a 3-2 majority of Democratic appointees.

Wolf, a Democrat, first unveiled the proposal last year, saying it would extend overtime eligibility to up to 460,000 workers in four years.

The administration said the revised rule unveiled Thursday would expand overtime pay eligibility to 82,000 workers who earn above a new federal threshold that’s rising to almost $36,000 on Jan. 1. Pennsylvania’s total non-farm payrolls are just above 6 million.

It would phase in the increase over three years and require in 2022 that salaried workers earning up to $45,500 a year get time-and-a-half pay for any time they work over 40 hours in a week, a slightly lower figure than Wolf’s administration initially sought.

Pennsylvania’s current threshold is set at the federal baseline of $23,660, although the administration said the rising federal threshold will make 61,000 workers in the state newly eligible for overtime pay.

The current threshold took effect in 2004.

Wolf’s administration said as many as 251,000 other workers may have a job whose duties qualify for overtime pay, but they aren’t getting the benefit because they don’t realize that qualify for it.

Wolf has pursued the new regulation after spending five years fruitlessly asking the Republican-controlled Legislature to increase Pennsylvania’s minimum wage , which is set at the federal minimum wage of $7.25 an hour. Most states have increased their minimum wage, including every neighboring state.

Wolf does not need legislative approval for the regulatory change.

Gordon Denlinger, executive director of the Pennsylvania chapter of the National Federation of Independent Business, said business owners will have a compliance nightmare on their hands and be unable to afford to promote younger workers into management roles.

One positive adjustment, he said, is that the Wolf administration had updated job classifications to more closely align with the federal rule.

In a statement, Gene Barr, the president of the Pennsylvania Chamber of Business and Industry, said Wolf’s administration had largely ignored concerns about its first overtime pay proposal, released in 2018, and he urged the commission to reject it.

The latest proposal is minimally different from the first one, which had received pushback from businesses, nonprofits and colleges, who worried about unsustainable cost increases, Barr said.

Wolf’s administration said employers could adjust by paying overtime to eligible employees, limiting them 40 hours a week, raising their salaries to above the threshold or reducing their base pay or benefits.

It does not apply to public employees, including those at state-affiliated entities, counties, municipalities and public school systems.

A handful of other states with higher minimum wages require overtime pay for salaried workers above the federal baseline, although Wolf’s proposal would appear to put Pennsylvania on par with the states with the highest thresholds, including California, New York and Alaska.