Patrick Duggan leaves the podium after talking to reporters at the Capitol rotunda Thurs., Oct. 10, 2019. Duggan says he was sexually abused by his history teacher at St. Francis of Assisi Catholic School in Harrisburg in the mid-to late 1970s, when Duggan was a teenager. At left is his attorney, Richard Serbin.

The plaintiff and his attorney say the need for the lawsuit points to the problems with relying on victim compensation funds. 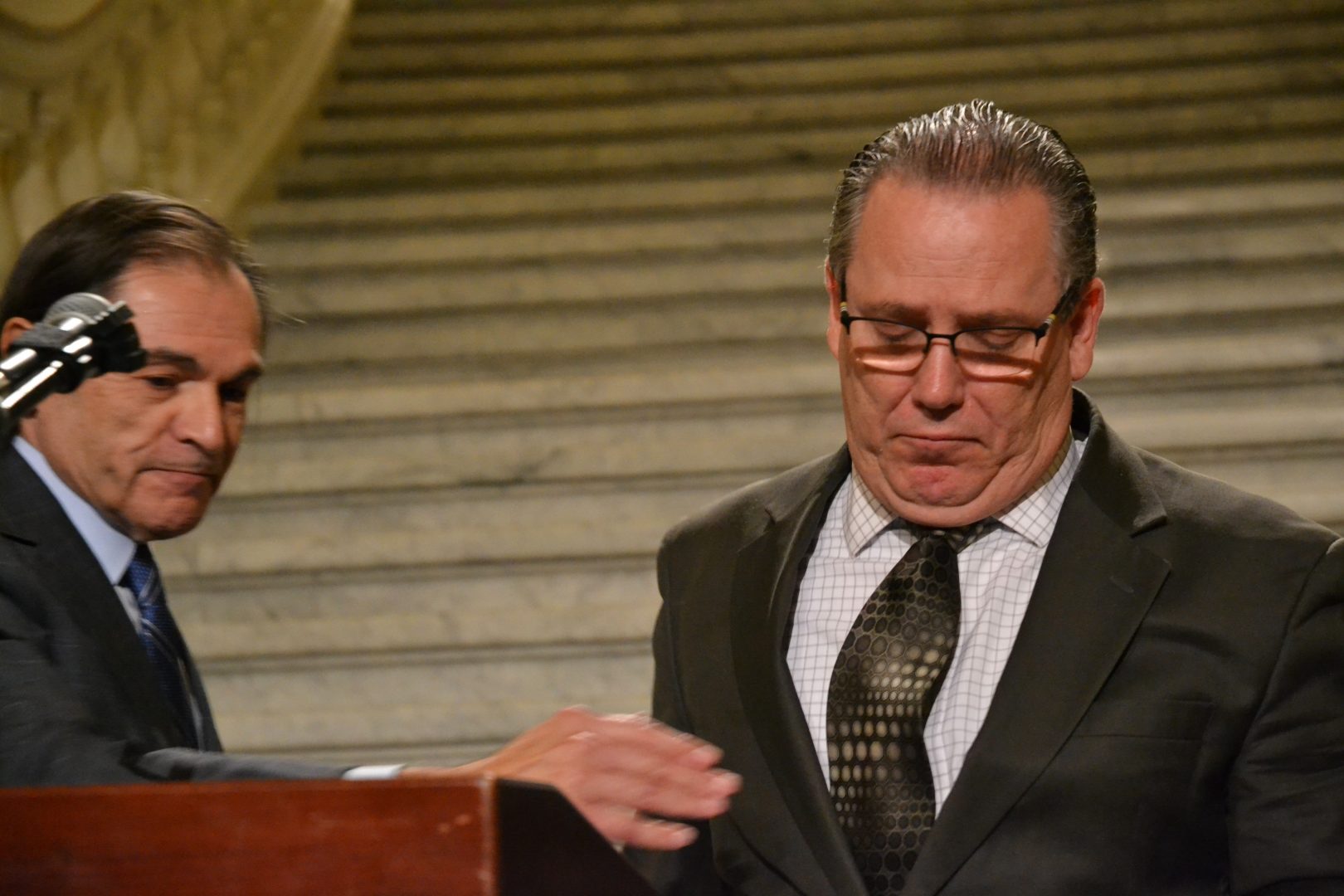 Patrick Duggan leaves the podium after talking to reporters at the Capitol rotunda Thurs., Oct. 10, 2019. Duggan says he was sexually abused by his history teacher at St. Francis of Assisi Catholic School in Harrisburg in the mid-to late 1970s, when Duggan was a teenager. At left is his attorney, Richard Serbin.

A lawsuit filed against the Catholic Diocese of Harrisburg, Bishop Ronald Gainer and the diocese’s former bishop, Kevin Rhoades, alleges the church turned a blind eye while a teacher drugged and raped a student.

The plaintiff and his attorney say the lawsuit points to the limits of the victims’ compensation funds that are paid for by the Catholic church and supported by some state senate Republicans.

In 1974, Patrick Duggan was a 13-year-old student at St. Francis of Assisi Catholic High School in Harrisburg.

Duggan says that’s when his history teacher invited him and other boys to his house. That teacher, Ronald Stewart, allegedly gave Duggan and other boys alcohol, marijuana and hallucinogenic drugs, the filing states.

“Plaintiff began visiting Stewart almost on a daily basis following class, as did many of the other male students. These visits by multiple students were (or should have been) open and obvious to the priests, nuns, school administrators, staff and other lay teachers who traversed between the school, church, rectory and administration offices, as well as the staff that supervised the grade school playground,” according to the suit.

After grooming Duggan, the filing alleges, Stewart sexually abused him “on countless occasions” between 1974 and 1978. That alleged abuse included rape.

Stewart died in 2010. Duggan alleges the church let it happen, and he said he has spent a lifetime trying to understand why.

“When you’re abused there, it changes you,” Duggan said. “You lose faith.”

“Based on what limited records exist,” Bryson said, “it appears this teacher only taught at St. Francis of Assisi for some part of one school year in 1975; the diocese is not aware of any contemporaneous allegations of abuse against (Stewart) from the 1975 timeframe.”

She said Gainer has met with many survivors, who “have access to resources to pay for professional therapy and counseling through the Diocese.” All of Duggan’s lawyer’s clients have had the chance to use Diocesan-funded counseling, she said.

“I suggest to you that compensation funds, as some of our politicians in Harrisburg state, are not the answer, because they exclude people who are abuse survivors like Patrick,” Serbin said. 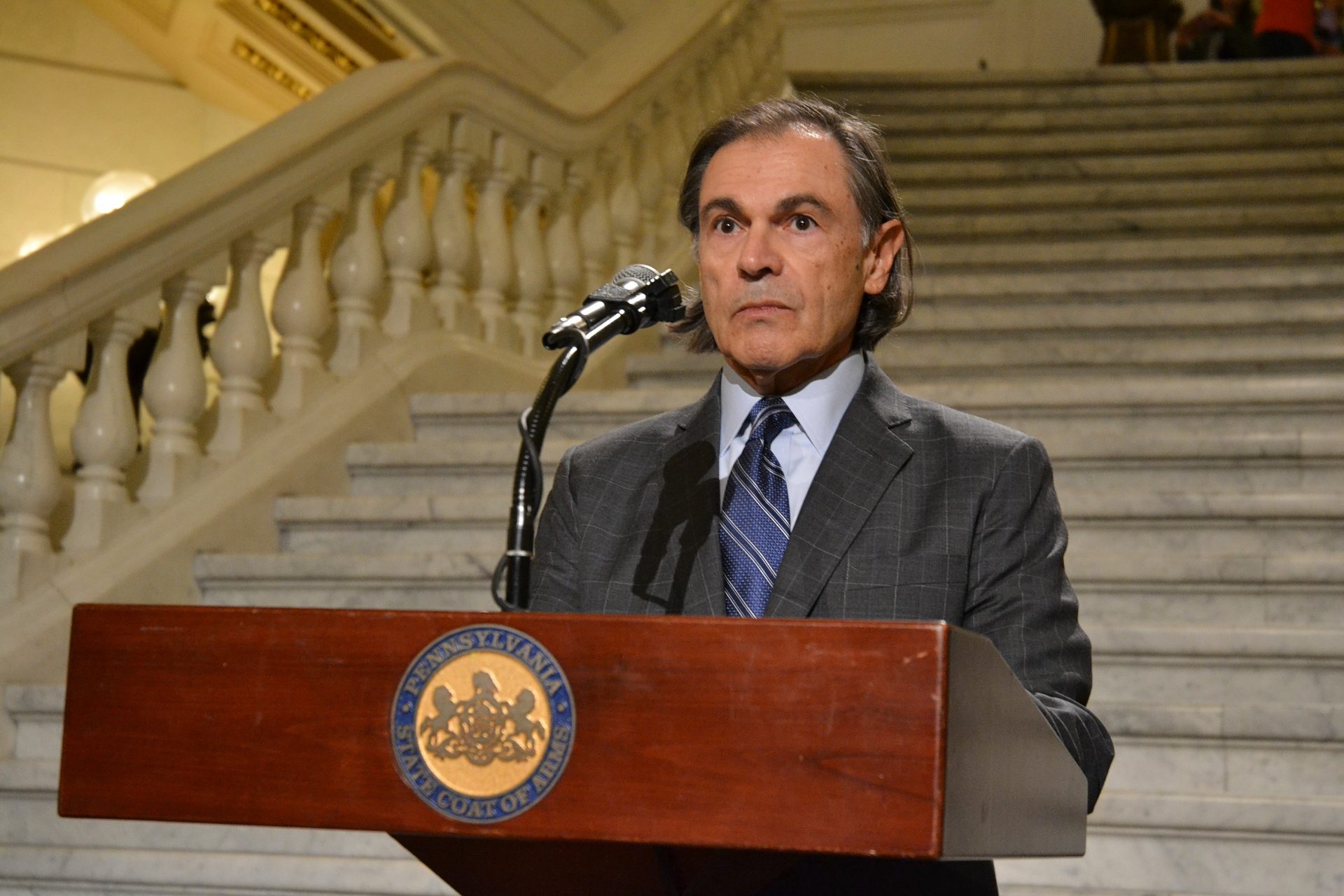 Attorney Richard Serbin speaks to reporters at the Capitol rotunda Thurs., Oct. 10, 2019. Serbin’s client, Patrick Duggan, says he was sexually abused by his history teacher at St. Francis of Assisi Catholic School in Harrisburg in the mid-to late 1970s, when Duggan was a teenager. Serbin is suing the Harrisburg diocese, Bishop Kevin Rhoades and Bishop Ronald Gainer.

The compensation funds were touted by some Republicans in the state senate, who blocked proposals that would have allowed victims to file lawsuits over allegations of sexual abuse for which the statute of limitations had expired.

Duggan and Serbin criticize lawmakers who oppose efforts to adopt those “retroactivity” proposals, which are similar to laws in New York and New Jersey.

Duggan says Republicans in the state Senate should put themselves in victims’ shoes. “And I want you to imagine that those abused are your sons, your daughters, your grandsons, your granddaughters,” he said.

Spokeswoman Jenn Kocher said Republican Senate majority leader Jake Corman supports eliminating most statutes of limitations for sex abuse cases going forward, but not on past cases. Some victims and victim advocates have said passing the bills without including past cases would be a dealbreaker.

One of those proposals would get rid of the criminal statute of limitations for future child abuse cases and extend the statute for civil suits. It would also hold institutions responsible if they knew about abuse but failed to stop it.

Another proposal, a constitutional amendment, would explicitly allow victims a two year window to file lawsuits on old abuse cases. However, that has seen opposition from some within his party.

“Our judiciary committee just last week held an exhaustive hearing where victims, advocates and others were able to come and provide testimony,” Kocher said. “As is our practice, we will allow the committee chairwoman to continue with her work considering and moving legislation as to not get out ahead of our committee’s work.”

Rhoades, who served as Harrisburg’s Bishop from 2004 to 2009, is now the bishop in the Ft. Wayne-South Bend, Indiana Diocese.

The Navy is naming a boat after Pennsylvania’s capital