Andrew Carnegie, shown in the center, in front of Rays Hill Tunnel in 1885 which was being dug in Pennsylvania for a railroad he and others were building along the route the Pennsylvania Turnpike now follows.

This is part of WESA’s Good Question! series, which investigates what you’ve always wondered about Pittsburgh, its people and its culture.

The Pennsylvania Turnpike: the concrete connector of the commonwealth and America’s first superhighway. The roadway was once called the “World’s Greatest Highway” and helped lay the foundation for what would become the federal interstate highway system.

Good Question asker Elaine Herald from Highland Park wondered about the markers on the turnpike and “where they measure the mileage to Pittsburgh from, where is the point?” 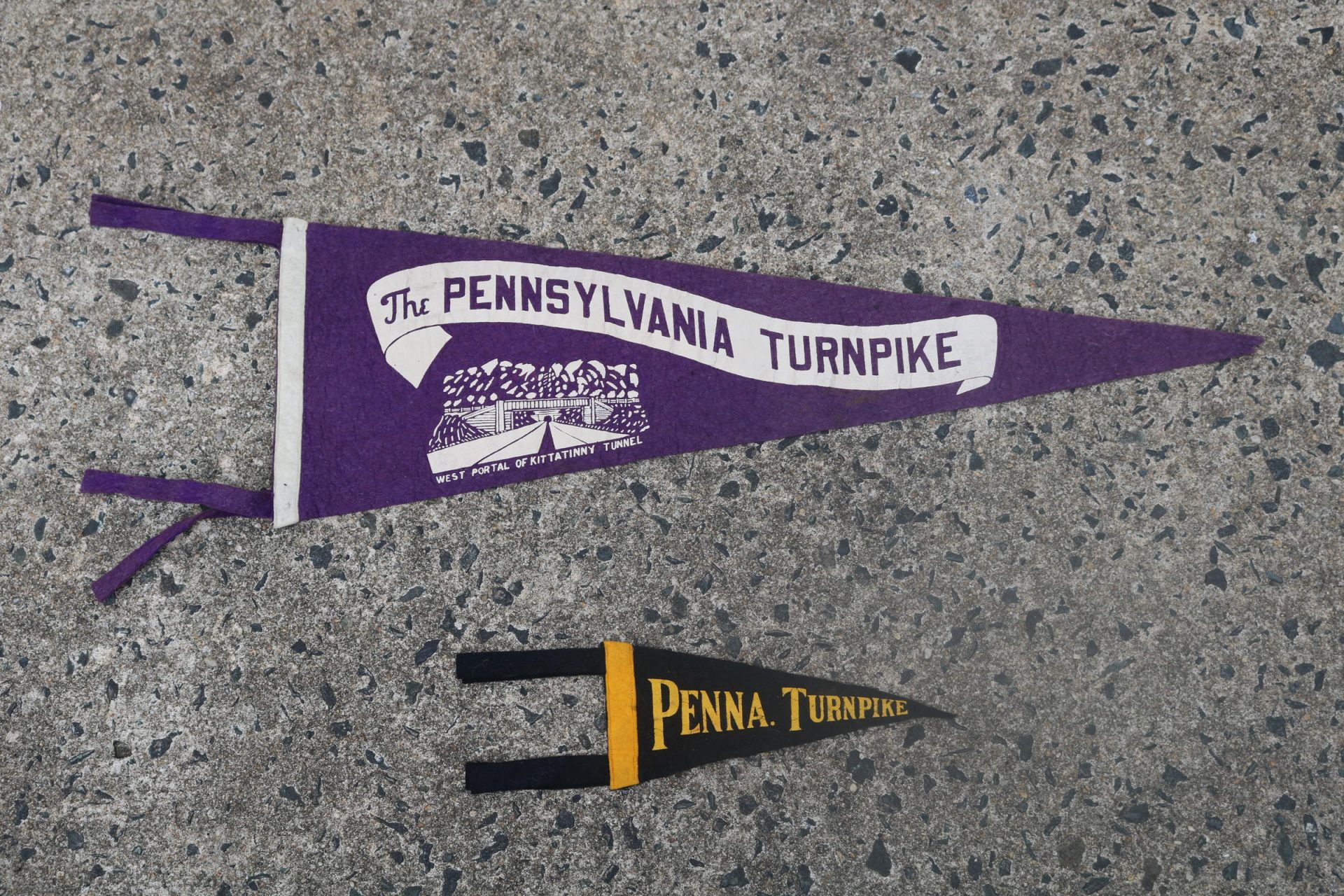 A pennet for the Pennsylvania Turnpike.

According to turnpike officials, the point is in Pittsburgh’s Central Business District. Depending on the GPS system, the specific location is either in front of Mellon Green on the corner of Grant Street and Sixth Avenue, or a couple blocks away in front of the City County Building on Grant Street. Some cities, like France, have a “Point Zero” marker indicate the origin spot of measurement. Pittsburgh doesn’t, but the question of measurement was also on the mind of Good Question’s Jana Thompson from the North Side.

“I wondered about the probability of the exit to Pittsburgh on the turnpike actually being on mile 57,” Thompson asked.

The 57 is a nod to the famous 57 varieties of ketchup of the H.J. Heinz Company. Carl Defebo, director of public relations and marketing with the Pennsylvania Turnpike Commission, said it is purely coincidental that the number is the same.

“Milepost zero is the Ohio border and milepost 359 is the New Jersey border,” Defebo said.

Most of the turnpike follows the route of the defunct South Pennsylvania Railroad. The line was imagined as a competitor to the powerful Pennsylvania Railroad and partially financed by industrialist Andrew Carnegie and businessman William Vanderbilt. But due to cost and the challenging terrain, it was never completed.

New England metropolitan areas like New York City had begun improving their local street systems and Pennsylvania was eager to join in. In the late 1930s, cars were becoming more popular and people wanted a faster way to get across the state.

“What created the turnpike was really this concept of building an all-weather highway through the mountains instead of Route 30, which would take you up over the mountains,” Defebo said.

Transit officials decided the quickest and most efficient path for the new turnpike would be on the existing right-of-way for the old South Pennsylvania railroad. Right-of-way is the legal ability to pass through property belonging to someone else and it’s often employed for large transit systems like railroads and highways.

“It was a natural place to build a highway,” said Neal Schorr, a Pittsburgh physician and co-author of “The Pennsylvania Turnpike.” “If nothing else it provided a good excuse to proceed with construction.” 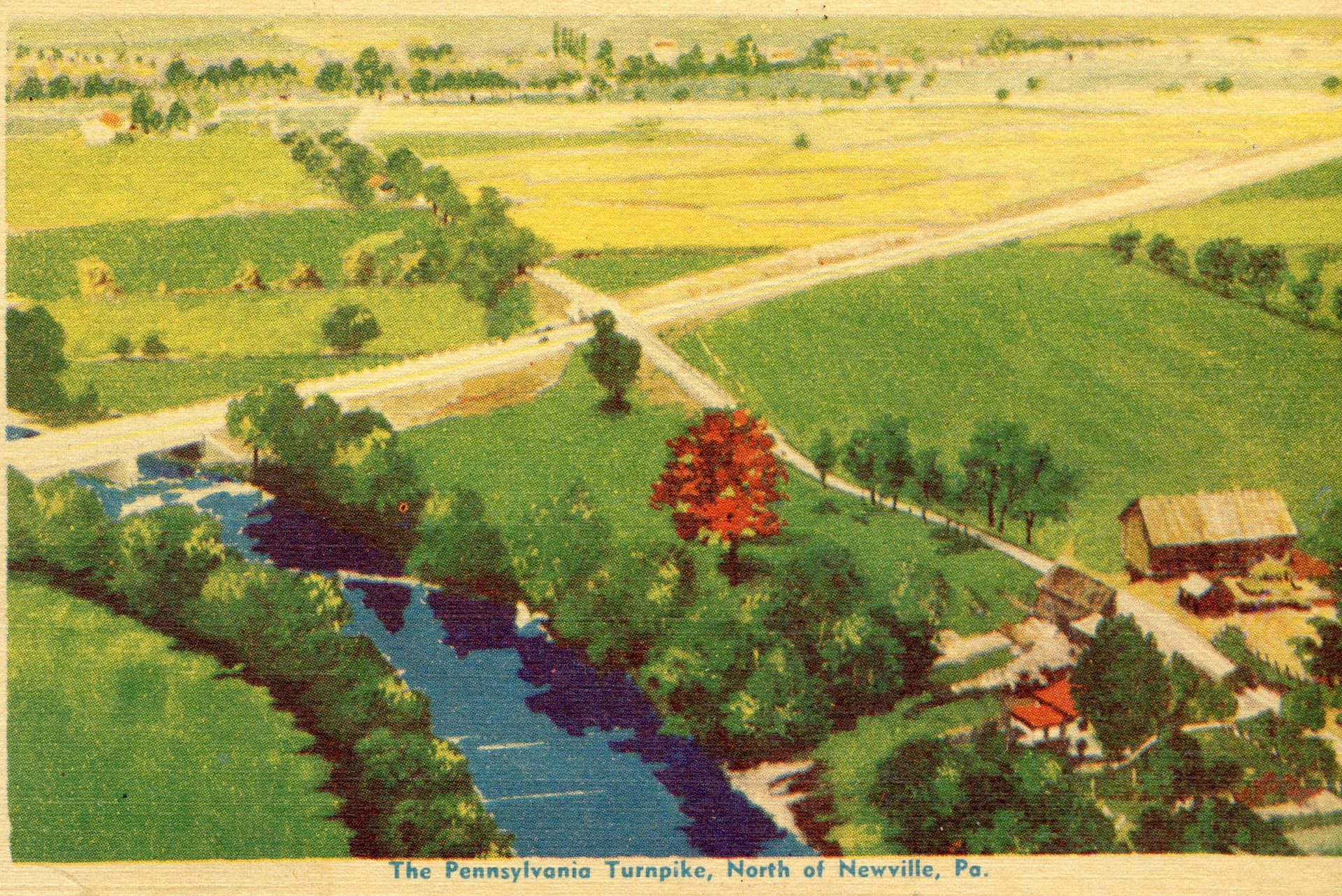 A watercolor postcard at Newville, Pa., about 175 miles east of Pittsburgh, shown here circa 1940 by painter Denis Hoffman

Workers on the South Pennsylvania Railroad had bored nine tunnels throughout seven mountains, so the planners of the turnpike determined with a little improvement work like lighting and ventilation, they could use six of them for the new roadway. Using the tunnels also eliminated the need for severe grading, so motorists wouldn’t have to encounter significant hills on their rides.

At the time, one of the only other major limited-access highways in the world was the Autobahn in Germany. Turnpike officials pitched the federal government for funding, saying the new Pennsylvania roadway would be a way to get military servicemen and equipment across the state quickly. President Franklin D. Roosevelt went even further and made the building of the turnpike a Works Progress Administration project. The agency provided jobs to struggling families during the Great Depression and the projects included bridges, museums and hospitals.

“It was this weird kind of amalgamation of world events happening that it just kind of led to the birth of the turnpike,” Defebo said. “It was designed by engineers who wanted to design a consistent experience from end-to-end.”

With funding in hand, construction began. Schorr said the original 160 miles of the turnpike was built in less than two years, “which would never happen today and nothing ever happened like it before.”

The drive from Pittsburgh to Philadelphia on the turnpike was two hours shorter than a trip on Route 30, also known as the Lincoln Highway. The highway was modern ⁠— the lanes were all the same width and motorists could ride it without encountering a stop sign or red light. Mitch Dakelman, the other co-author of “The Pennsylvania Turnpike,” said the hype around the turnpike’s opening was palpable. At midnight on Oct. 1, 1940, the original span between Irwin and Carlisle opened to traffic.

“A lot of folks all over the country came to see it,” Dakelman said. “It was an attraction not only to get you from place-to-place, but it was just so new.” 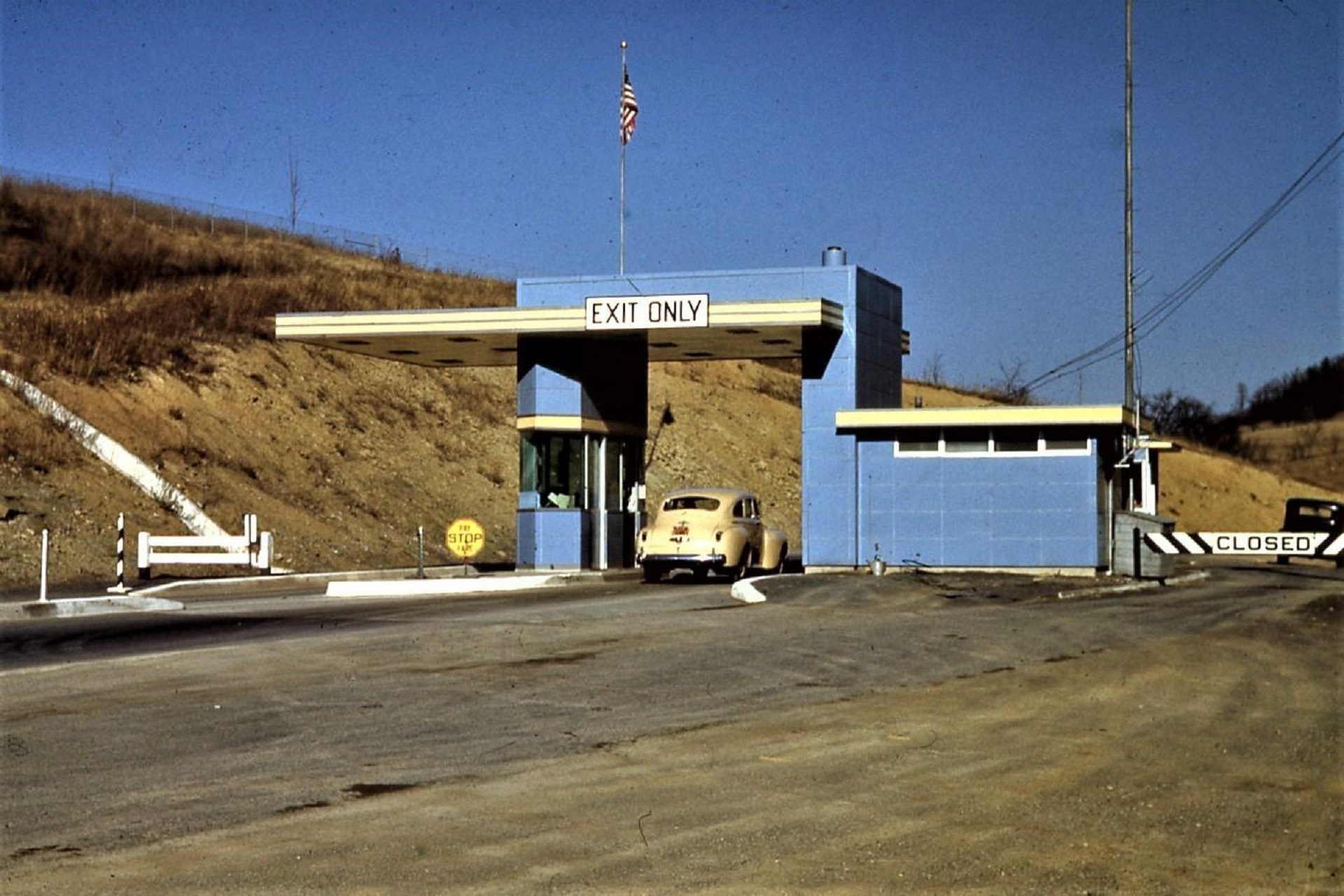 The Bedford interchange circa 1940.

Nancy Summers remembers the joke in her family was that “regardless of whether we were going north, south west or east, we went at least one section of the turnpike, even if it was only one interchange to the next.” Her father, Franklin Summers, ran the Turnpike Commission beginning in the late 1950s.

Summers described the early experience of the Pennsylvania turnpike, when people would have retirement parties at the Rays Hills Tunnel, one of the unused, abandoned tunnels. The original turnpike ran through rural areas and farmland, so as a result, Neal Schorr said, there weren’t a lot of amenities for motorists.

“That part of Pennsylvania traverse was really like wilderness,” Schorr said.

Because there were no federal highway standards at the time, the turnpike’s exits were numbered sequentially from one to eleven. That changed in the early 2000s when the mile-based numbering took effect.

Now, the once-rural areas are more developed and many of the original plazas are gone. The toll plazas are almost all automated, so Summers said she no longer takes “Christmas cookies out to Gettysburg interchange and Blue Mountain” because tollbooth workers aren’t there anymore.

Nowadays, the turnpike may feel like any other roadway, but its then-modern design and innovative approach to vehicular travel give it a special place in American infrastructure history.

‘We have nothing to lose but our chains’: Pittsburgh protesters demand change for black women