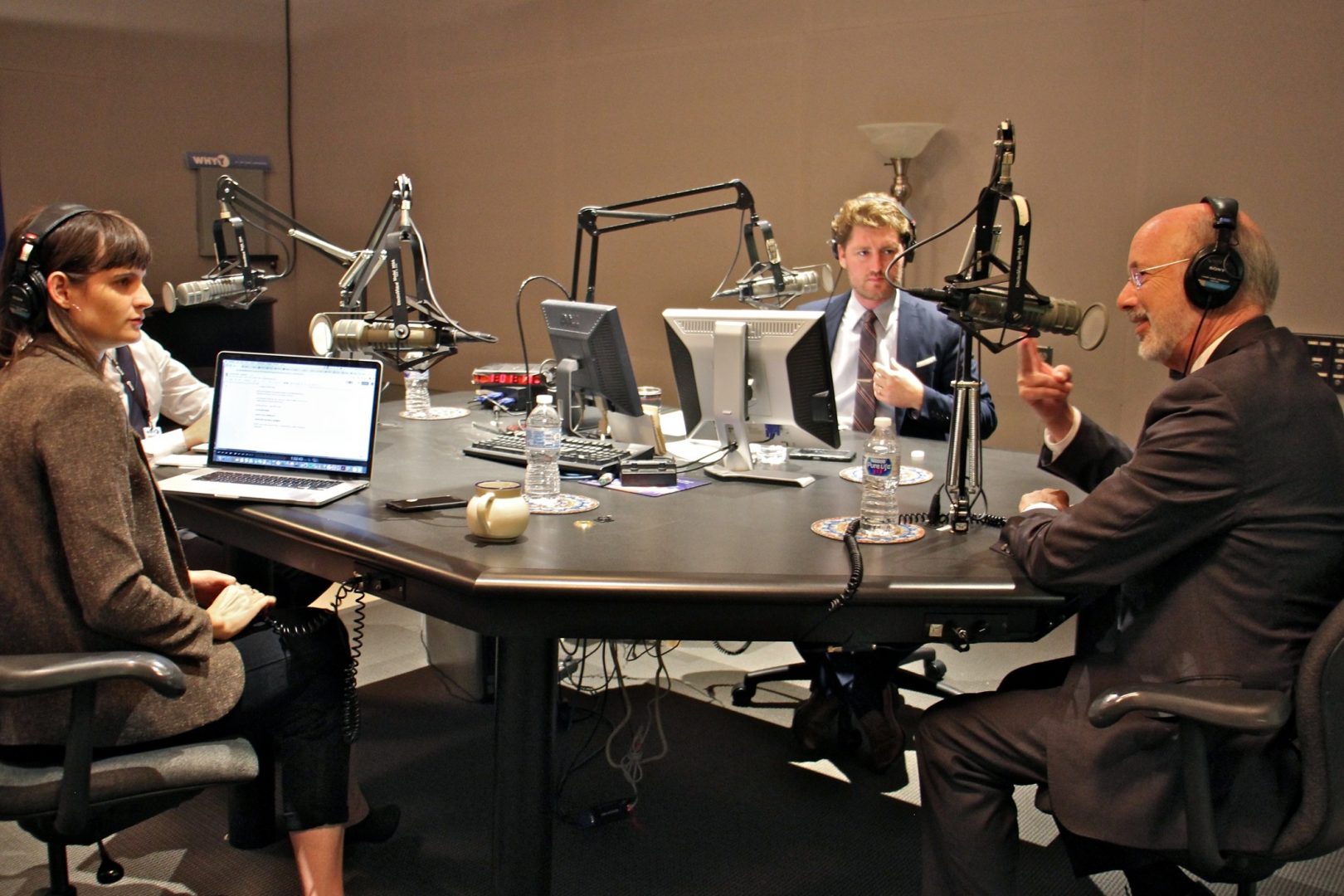 Below are some of the biggest takeaways from Thursday’s conversation.

The bill would expand the mandatory use of E-Verify to employers in the construction industry. E-Verify is a federal program that cross-checks personal information submitted by employers against Department of Homeland Security and Social Security Administration records to try to weed out immigrants working unlawfully in the U.S.

Wolf said he wouldn’t sign it, but he also wouldn’t veto it. In effect that allows it to become law. He called the decision “a tough one.”

“On the one hand, you have concerns about what this does to immigrants, people who come to the country looking for opportunity or asylum. On the other hand,” he said, “it’s a legitimate attempt to protect the legitimate rights of workers who want to make sure that their jobs aren’t being taken away by someone who might be working for an unscrupulous contractor who would be paying them less than they deserve to get paid.”

Supporters of the bill say it prevents an “unlevel playing field” for employers. Wolf also noted that the bill passed both chambers with bipartisan support.

Throughout the program, listeners used #AskGovWolf to join in the discussion on Twitter.

#askgovwolf why allow a divisive anti-immigrant bill like HB1170 go into effect when there are better policy options all can get behind, like funding enforcement of wage laws and rooting out misclassification? veto this bill!

“The policy undermines workplace rights as undocumented workers are pushed further into the shadows and unscrupulous employers use the law to threaten workers from organizing for better working conditions,” said Ashleigh Strange, with the immigrant’s rights organization Make the Road PA, in a press release.

Civil libertarian groups, such as the Cato Institute, have also criticized the software, calling it a “government surveillance program” that can wrongfully impact legal residents who are authorized to work.

‘Most frustrated person in Pennsylvania’

Eleanor Proct, from Quakertown, Bucks County, asked Wolf if he can ease or eliminate the property tax burden on seniors.

“I know that there’s people that are losing their homes because they can’t afford the taxes,” she said in a field interview with Keystone Crossroads. “How can you lower taxes for senior citizens. What can you do? Or even do away with the current way of funding schools. Just give everybody a tax break but especially seniors.”

Wolf ran on property tax reform, baked it into his first proposed budget, but admitted he hasn’t made progress.

“It’s one of the things everyone in Harrisburg supports, but no one has figured out a way how to do it,” he said.

Some reform proposals include shifting all or some of the burden of funding schools from local property taxes onto other kinds of taxes — for example by increasing sales or income taxes or taxing retirement income.

Wolf vowed to press the issue before the end of his second term in office, saying, “If I got to eight years and we haven’t done something about that, I’m going to be the most frustrated person in Pennsylvania.”

In this initiative, participating states attempt to limit carbon dioxide emissions from fossil-fuel burning power plants by making them purchase credits for the greenhouse gases they emit.

“There is still more that we have to do. We have to look at this as the urgent problem that it is,” said Wolf.

In response to whether this could hurt coal country, he said, “We need to do this in a way that is sensitive to the needs of communities and workers…[but] we might all die if we don’t do this right.”

#askgovwolf We need to be addressing carbon and climate change like the crisis it is. Pricing carbon is the fastest tool, but we need every available approach to address this.

“This is like World War II,” said Wolf. “We’ve got to all work together.”

Following an extensive “listening tour,” by Lt. Governor John Fetterman, Wolf recently announced his support for legalizing recreational use of marijuana by adults in the commonwealth.

At first, he said he didn’t think residents were ready for legalization. Fetterman’s report changed his mind, he said.

What that will look like is unclear. Wolf said he is “open to suggestions,” on the best way to tax, regulate and distribute legal weed.

Meanwhile, garnering support among lawmakers seems it will be an uphill battle. House Speaker Mike Turzai, R-Allegheny, has raised concerns about the safety of legalization, in terms of crime and mental health.

Ask Governor Wolf is produced quarterly by Keystone Crossroads as a collaboration of WHYY, WITF, WPSU and WESA. WHYY is the leading public media station serving the Philadelphia region, including Delaware, South Jersey and Pennsylvania. This story originally appeared on WHYY.org.

US Agriculture Secretary says small farms are in trouble. But Pa. advocates have hope.