Jennifer Lugar, whose husband died by suicide with a gun in 2009, listens as state Sen. Tom Killion, R-Delaware County, speaks during a panel discussion on Oct. 1, 2019. The discussion took place at the Chadds Ford Township Municipal Building. 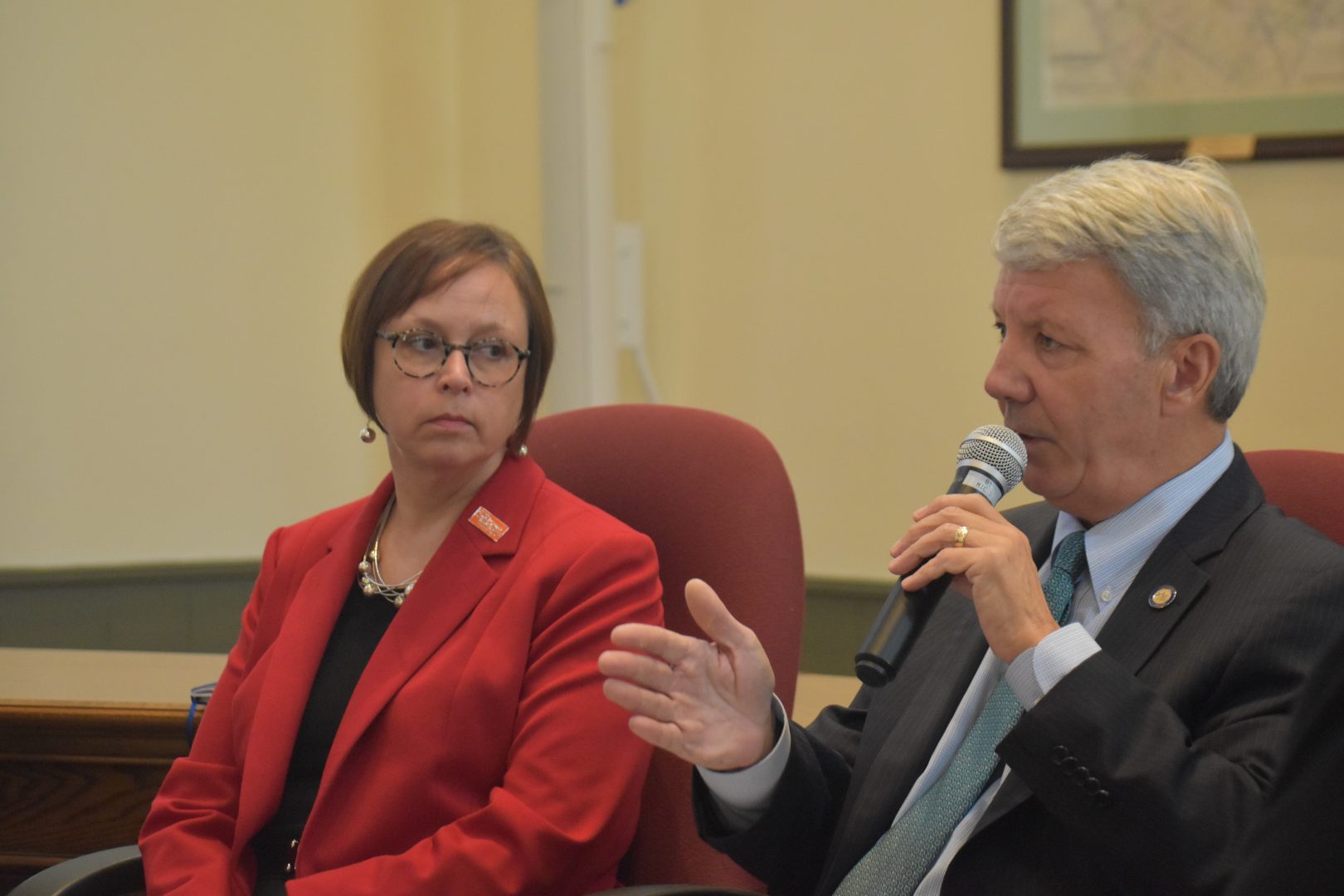 Jennifer Lugar, whose husband died by suicide with a gun in 2009, listens as state Sen. Tom Killion, R-Delaware County, speaks during a panel discussion on Oct. 1, 2019. The discussion took place at the Chadds Ford Township Municipal Building.

A Republican lawmaker from the Philadelphia suburbs says he is considering changes to legislation that would give law enforcement the power to seize people’s guns if a court determines they are a risk to themselves or others.

Under the current draft of state Sen. Tom Killion’s legislation, a family member who makes false allegations while asking a court to temporarily remove someone’s gun rights could be charged with a second degree misdemeanor.

“That’s something we may want to look at — put more teeth into it,” Killion said during a Tuesday panel discussion at the Chadds Ford Township Municipal Building in Delaware County.  “False claim — you’re going after a constitutional right. That’s a serious, serious matter.”

Killion said upping the penalty for a false allegation would address concerns that an angry ex-spouse or partner would make false claims to obtain an extreme risk protection order as payback.

“You make it a felony that takes that whole argument away. I mean, now you’re talking jail time,” he said, adding that a felony conviction also makes it difficult for someone to find a job. “So that’s what we’re looking at right now, which I think will go a long way to help us get it across the finish line.”

Killion’s legislation, Senate Bill 90, already includes other penalties for someone who makes a false statement or whom a court determines “acted in bad faith for the purpose of harassing the respondent … .” In addition to criminal charges, the penalties include paying for the defendant’s attorney fees and storage costs.

Gun rights groups and some lawmakers have raised several objections to extreme risk protection orders, including part of the process known as an ex parte proceeding. Such a proceeding, where the defendant isn’t present or represented by counsel, would allow a court to temporarily remove someone’s gun rights.

Those interim extreme risk protection orders could last up to 10 days — or longer if the defendant agrees to push back a full hearing.

A gun owner would have a chance to mount a defense if a judge moved to extend the surrender period for three months to one year.

Lawmakers are scheduled to return to session in Harrisburg Oct. 21.

“We’re going to hit the ground running with Moms Demand Action and all the other advocates to push for this bill,” Killion said. “I would love to get it out of the Senate before we go home for Christmas break.”

The legislation is a top priority for Democratic Gov. Tom Wolf and gun violence prevention advocates. But it faces a tough fight in the GOP-controlled General Assembly.

The Giffords Law Center, which supports extreme risk protection orders, recommends that any such law should have criminal penalties for people who file a petition that contains statements the person knows are false. The group’s online guide to the law doesn’t get into details of whether that penalty should be a felony or misdemeanor.

Bill would allow Pa. local officials to get pay increases of up to 68%