Advocates say they're frustrated that more hasn't been done since 58 people died at a concert on the Las Vegas Strip. 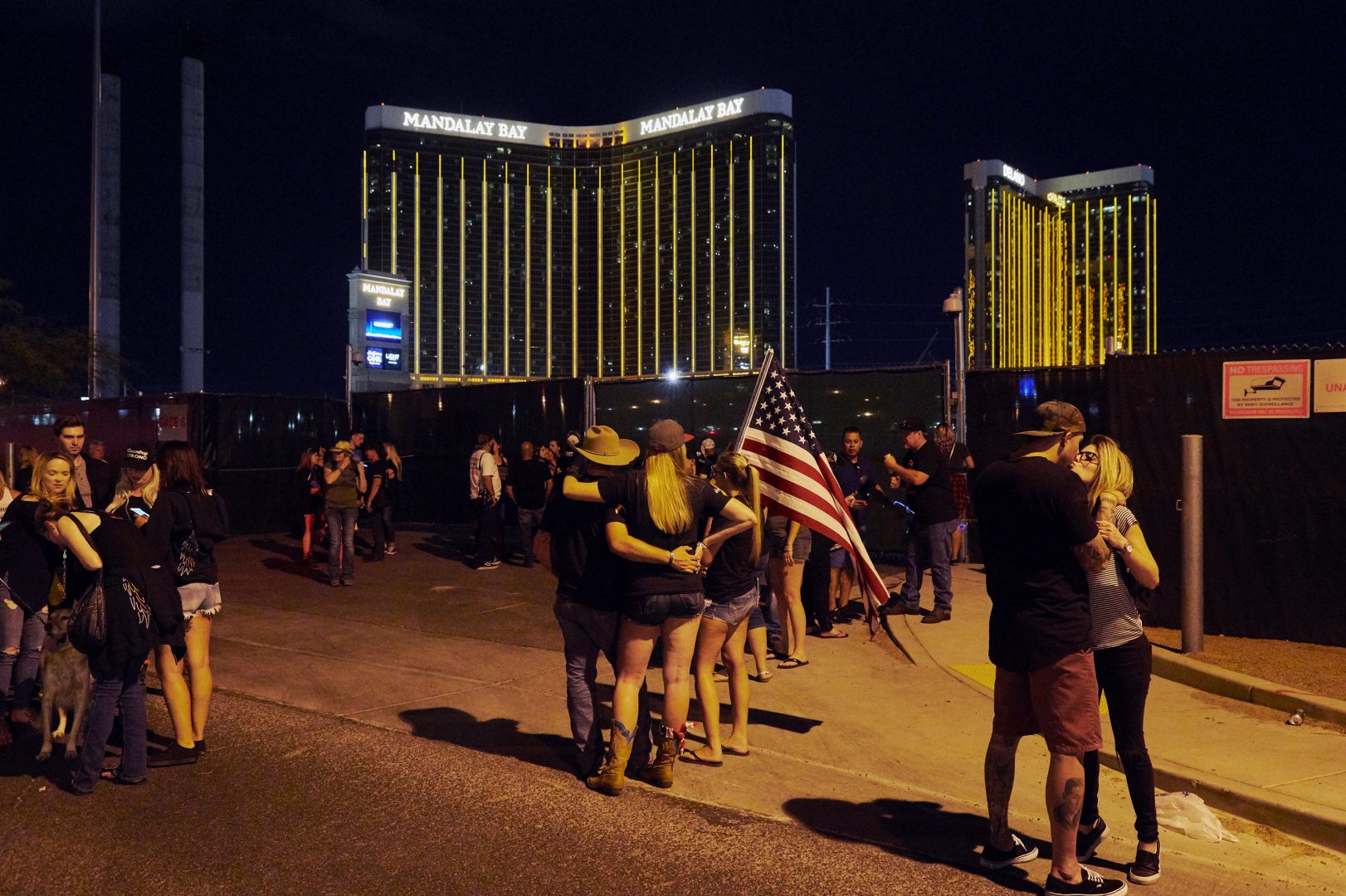 (Las Vegas) — In the two years since the deadliest mass shooting in modern U.S. history, the federal government and states have tightened some gun regulations.

But advocates say they’re frustrated that more hasn’t been done since 58 people died at a concert on the Las Vegas Strip, and that mass shootings keep happening nationwide.

The Democratic lawmaker and her now-husband were among the 22,000 country music fans that fled as gunfire rained down from a high-rise hotel into an outdoor venue on Oct. 1, 2017. Neither was wounded.

“You cannot go to the grocery store. You cannot go to your place of worship. You can’t even go to school and feel safe,” said Jauregui, an advocate for gun control in Nevada. “I think people are tired of that.”

The U.S. government this year banned a device that helped the Las Vegas gunman shoot more rapidly. Nevada and some other states also have tightened gun laws, including passing “red flag” measures that allow a judge to order weapons be taken from someone who is deemed a threat.

Those and other efforts to combat gun violence follow mass shootings in the two years since the Vegas massacre, including an attack on a Florida high school last year that killed 17 and attacks in Texas and Ohio that killed 31 people in one weekend this summer.

“It’s a shame that it takes more and more of these shootings to bring attention to a topic,” said Liz Becker, a volunteer with the gun control advocacy group Moms Demand Action.

But “I do think that the tide is turning on these issues,” Becker said. The Las Vegas shooting “really galvanized people who, not that they didn’t feel a connection to gun violence survivors, but they just never thought it would be them and their community.” 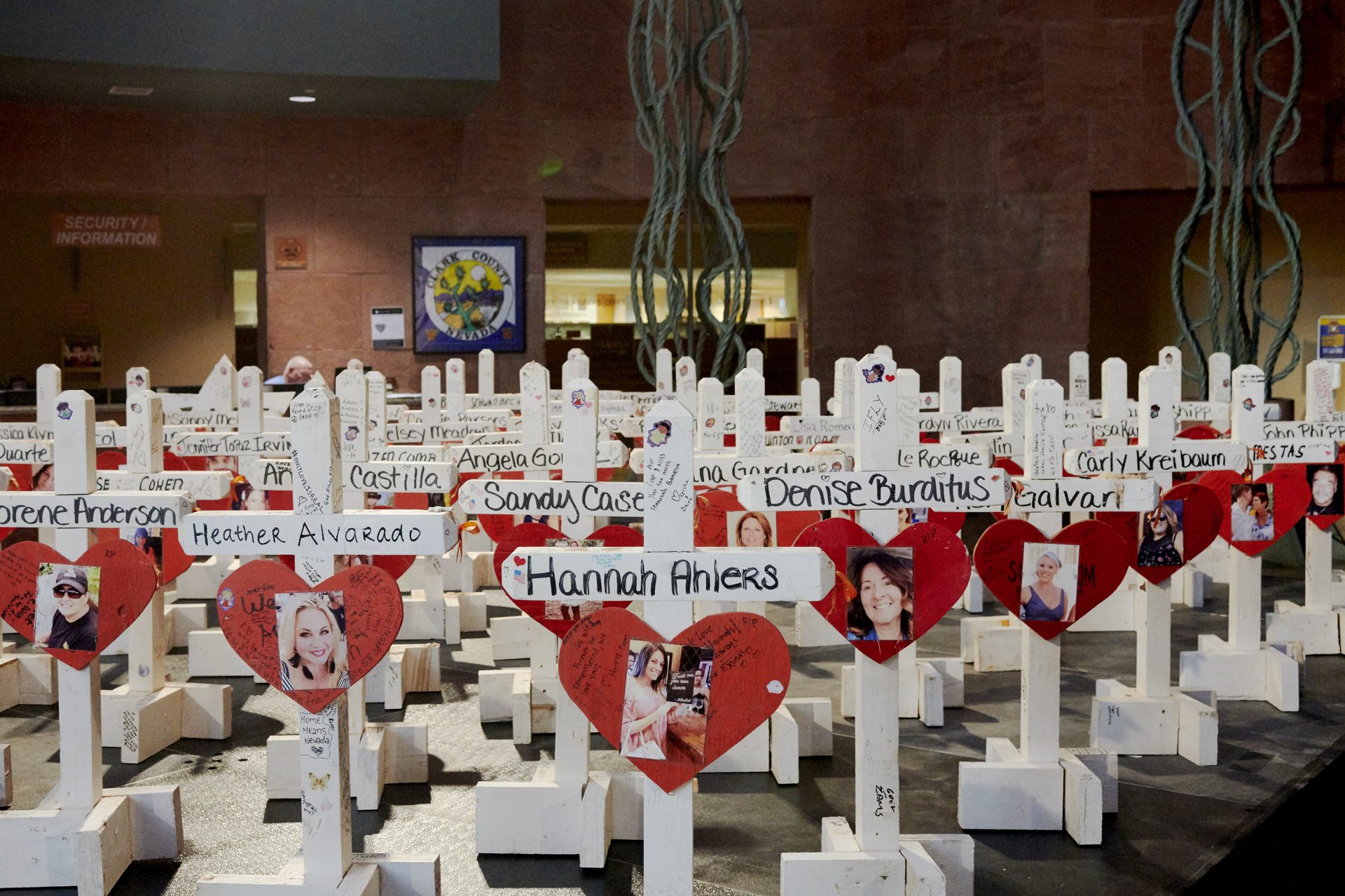 Each of the 58 people killed in the attack is honored with a cross inside the Clark County Government Center in Las Vegas on Sept. 28, 2018. It was the deadliest mass shooting in modern U.S. history.

During memorials Tuesday for the second anniversary of the Las Vegas attack, some will cite other recent mass shootings, including in the Texas towns of Midland and Odessa that left seven dead; at a synagogue in Pittsburgh that killed 11; and at a city government building in Virginia Beach, Virginia, that killed 12.

Lacey Newman, who was shot in the leg but managed to keep running, was among the hundreds injured at the music festival two years ago. She’s now an advocate for a company called citizenAID that offers a cellphone app, online training and a bandage kit to help people injured in shootings or accidents.

“Our mass shooting was the beginning of change in how a lot of us see the world,” said Newman, a 35-year-old mother of a fourth-grader who lives in Huntington Beach, California. “That’s a powerful thing. You just never know when something bad is going to happen.”

Police and the FBI found that gunman Stephen Paddock meticulously planned the attack and theorized that he may have sought notoriety. But they found no clear motive.

The 64-year-old retired accountant and high-stakes video poker player killed himself before police reached him in a 32nd floor suite at the Mandalay Bay resort.

Police found 23 assault-style weapons in the room, including 14 fitted with bump stock devices, which the Trump administration banned in March. Several gun rights groups have filed legal challenges to the prohibition, which also requires owners to turn in the devices to be destroyed.

In Nevada, lawmakers passed a measure that ended a two-year legal battle over a voter-approved initiative to expand gun buyer background checks to private gun sales and transfers.

In addition to the “red flag” law, the Legislature also made it a crime to leave an unsecured a gun in a place where a child can reach it.

Democratic Gov. Steve Sisolak called the measures a memorial to the victims, even though they would not have made a difference for the Vegas shooter, who obtained his guns legally.

Lawsuits over the massacre are still winding their way through courts.

MGM Resorts International — corporate owner of the Mandalay Bay, where Paddock opened fire, and the concert venue where people were killed — is defending itself against hundreds of liability lawsuits.

The company told federal regulators in May it is in mediation with attorneys for plaintiffs and that it might pay up to $800 million to settle claims.

All 4 escapees from Ohio jail arrested in North Carolina