Pittsburgh Pirates manager Clint Hurdle sits in the dugout before a baseball game against the Chicago Cubs in Pittsburgh, Wednesday, Sept. 25, 2019.

Calling it "an extremely difficult decision," Pirates GM Neal Huntington fired Hurdle in the final hours of a disappointing year.

(Pittsburgh) — Clint Hurdle’s booming voice and unrelenting optimism helped shake the Pittsburgh Pirates out of two decades of misery. His charisma gave the moribund franchise an identity, one that reconnected the club with a fan base worn down by a generation of losing.

Yet over the years, as the core that led the team to three straight playoff berths from 2013-15 vanished with trades, retirement and the pursuit of financial riches elsewhere, that optimism started to fly in the face of reality. Pittsburgh fell off the pace after winning 98 games in 2015, and as players shuffled in and out, the giddiness of those three intoxicating years of contention faded.

When Hurdle arrived for work Sunday for Pittsburgh’s regular season finale against Cincinnati, the Pirates were assured of their worst record since 2011, his first year on the job. By the time Trevor Williams threw the first pitch to José Peraza, Hurdle already was headed home, his nine seasons in Pittsburgh over following a stunning second-half collapse marred by embarrassing off-the-field issues that indicated a clubhouse in disarray.

Calling it “an extremely difficult decision,” Pirates general manager Neal Huntington fired Hurdle in the final hours of a disappointing year, putting an abrupt end to a partnership that guided Pittsburgh back to relevance. The Pirates finished 69-93, including 25-48 since the All-Star break. Huntington stressed the front office wasn’t making Hurdle a scapegoat for failings that stretched far beyond the manager’s reach.

“There is no one thing that led us to this decision,” Huntington said. “It’s easily summed in new voice, new leadership, new direction in the clubhouse but I’m not saying it’s his fault. I’m sitting here wearing it. We are wearing it as an organization, and we’re going to work our tails off to never be in this spot again.”

Hurdle went 735-720 in Pittsburgh, the fourth-winningest manager in the club’s 132-year history in the National League. He took over a team coming off a 105-loss season the year before his arrival and with the help of a group that included star centerfielder Andrew McCutchen, orchestrated a revival that saw Pittsburgh become contenders in the NL Central.

Yet the Pirates never made it past the Division Series over the course of three consecutive playoff appearances. The team slid back to mediocrity as A.J. Burnett retired in 2015, McCutchen and pitcher Gerrit Cole were traded in January 2018, and catcher Russell Martin and pitcher J.A. Happ were among those who landed lucrative deals as free agents after playing pivotal roles in Pittsburgh’s resurgence.

The Pirates averaged just 76 victories over Hurdle’s final four seasons. He leaves with two years remaining on a contract extension he signed in 2017. 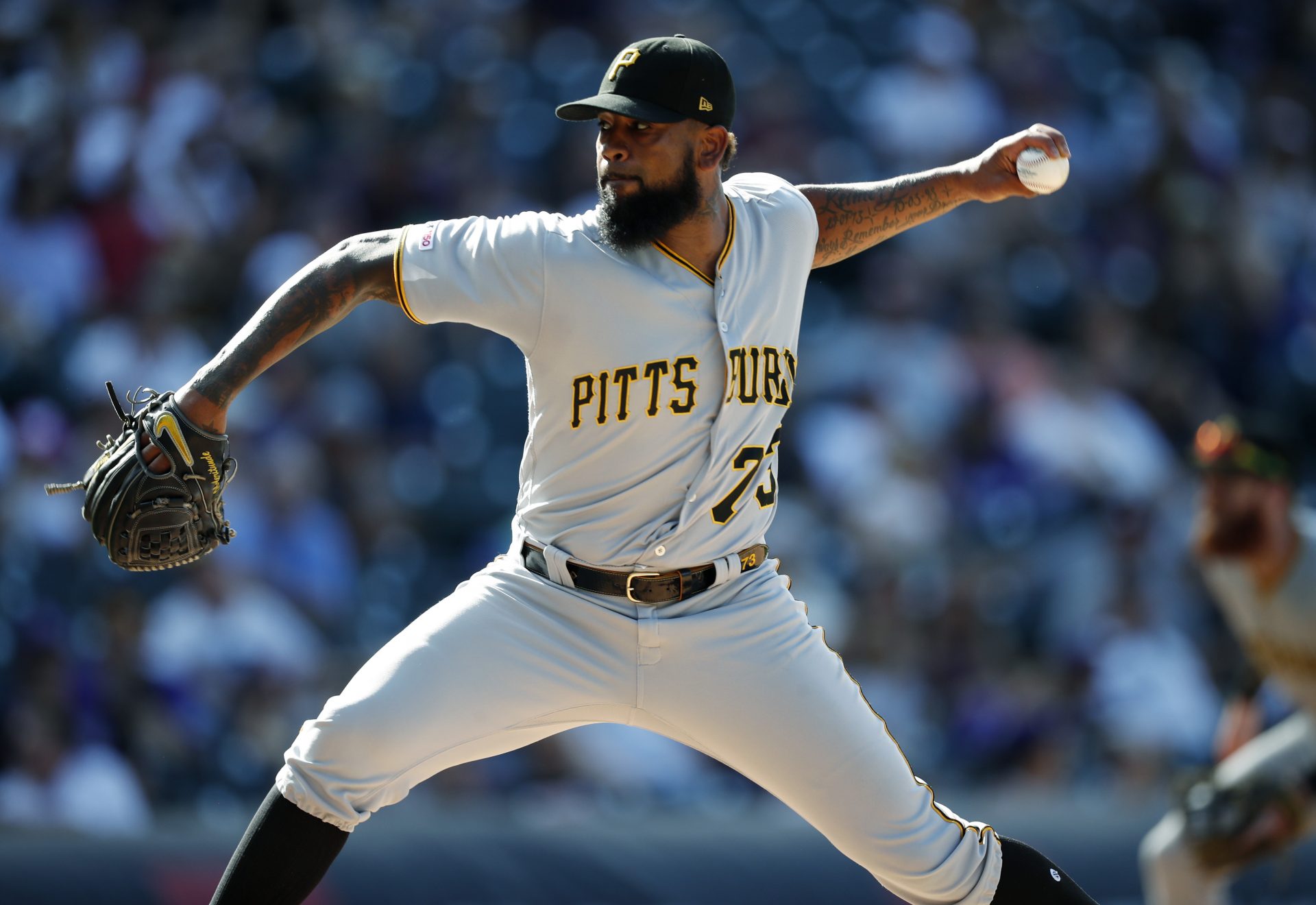 FILE PHOTO: In this Sept. 1, 2019, file photo, Pittsburgh Pirates pitcher Felipe Vazquez works against the Colorado Rockies in the ninth inning of a baseball game in Denver. Pirates All-Star closer Felipe Vazquez has been arrested on charges of pornography and soliciting a child. Vazquez was taken into custody Tuesday morning, Sept. 17, 2019, by Pennsylvania State Police on one count of computer pornography/solicitation of a child and one count of providing obscene material to minors.

Bench coach Tom Prince filled in during a 3-1 loss after Hurdle declined the option of working one last day. Prince, who played for Pittsburgh from 1987-93 — his final year with the Pirates serving as the first of what would become a record 20 straight losing seasons for the franchise — called Hurdle “an unbelievable man.”

“It’s a tough time,” Prince said. “What he means to this organization. What he brought it back from? I was actually a player here. What he did to rebuild it and as a part of that? Tremendous.”

Huntington said he will explore both internal and external options for the team’s 40th all-time manager. Prince and special assistant Jeff Banister — who took the Texas Rangers to the playoffs in 2013-14 before returning to Pittsburgh — both have deep ties to the team and Prince allowed he would be interested in the job.

Center fielder Starling Marte, the longest-tenured player on the roster, said he though Hurdle would be back in 2020.

“He’s demonstrated to us that he’s always been positive, always been a man with a plan and I really thought going into next year he was going to come in with a fresh plan, whole new energy, new perspective,” Marte said through an interpreter. “And when we received the news today, even though it was something out of our control, it was something that was surprising and shocking to us.”

While Hurdle is moving on, Huntington is not. Pirates chairman Bob Nutting said in a statement he “strongly” believes Huntington and his leadership team “are the right people to continue to lead our baseball operations department.”

Shortly before his firing, Hurdle sounded upbeat about the direction of the team despite its post All-Star break funk. Pittsburgh entered the break at 44-45 but promptly lost 24 of its next 28 games. He told The Athletic last week he had received assurances he would return for a 10th season. Yet he also admitted part of a manager’s job is to sell tickets by putting a winning team on the field.

Attendance at PNC Park has dropped in lock step with Pittsburgh’s slide. The Pirates averaged 18,412 fans this season, down from 30,847 when Pittsburgh won 98 games in 2015.

“When you don’t play well, the responsibility falls upon the manager of the team,” Hurdle said. “Then the people that make those decisions on whether the manager stays or the manager goes, coaching staff goes, coaching staff stays, players go, players stay, that’s what front office does. . I’ve always felt I have a really good grasp on what my accountability and responsibility is. I’ve never shirked away from it or never not owned up to it. So, absolutely not winning enough games falls right here.”

Off the field, pitcher Felipe Vázquez was charged with statutory sexual assault, unlawful contact with a minor and corruption of minors, all felonies, and a misdemeanor count of indecent assault of a person under 16 years old. Reliever Keone Kela was suspended for an argument with a team official, and Vazquez and reliever Kyle Crick got into a fight that resulted in Crick needing season-ending surgery on his right index finger.

“(There are) players that have come through our system that talked about, ‘This is not what the Pirates do. This is not who we are,'” Huntington said. “I’m not going to sit here and say that it’s Clint Hurdle’s fault. It’s all of us. It’s all of us in this.”