(Philadelphia) — Brad Wienczkowski didn’t want to leave treatment. He had just finished detox, and he still felt sick from withdrawal symptoms. He didn’t feel ready to be on his own after seven years of injecting heroin.

But Wienczkowski was caught smoking a cigarette in rehab. And, in Philadelphia, city-funded inpatient drug facilities prohibit smoking. He was discharged for breaking the rule.

“I was worried I was gonna use if I left,” he said. “And that’s exactly what happened.”

After leaving treatment, the 26-year-old overdosed. He woke up in the hospital, assuming he’d been revived with naloxone. Soon after, he tried treatment again at a different facility. This time, he completed the program — in part, he said, because he was able to smoke.

“There was a place where they knew everybody was smoking at,” Wienczkowski said. “But if you were careful about it, even though it was obvious, they still let it go because they understood.” 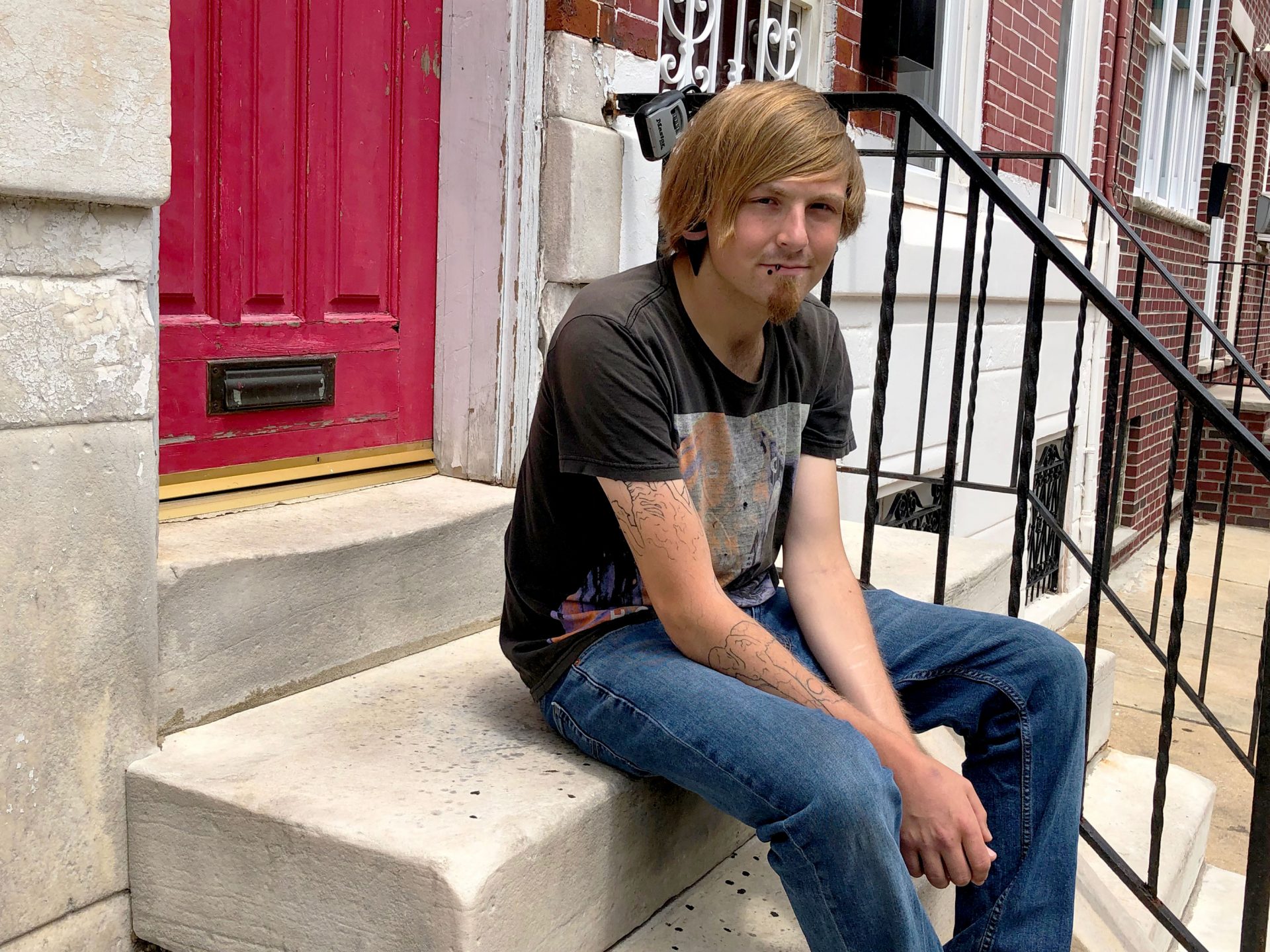 Brad Wienczkowski outside his recovery house in South Philly in June. Wienczkowski overdosed after being kicked out of treatment for smoking a cigarette.

The city has touted the success of its tobacco-free policy, pointing to statistics that show little change in patient-discharge rates since the smoking ban went into effect. But Wienczkowski’s overdose and other instances of people being kicked out of treatment for smoking have led city officials to backtrack on their hard-line enforcement of the ban.

Now, both providers and clients say, despite the nominal ban, it’s still easy to smoke in treatment. They describe dangerous health conditions for clients and staff because of smoking, and say that, if anything, the ban has created a bigger black market for cigarettes.

“It’s not really stopping people from smoking,” said Wienczkowski. “It’s just making people change back to addict behaviors in order to get what they want.”

Philadelphia’s Department of Behavioral Health and Intellectual disAbility Services implemented the tobacco-free policy in January, after two years of preparation. When he announced the policy in January, DBHIDS Commissioner David Jones cited National Institutes of Health research that found those with substance use disorder are less likely to relapse if they also quit smoking. The department said opioid users were three times more likely to smoke than those who do not use drugs or alcohol and also die 25 years earlier, on average.

“Providing substance use treatment in a smoke-free environment will not only help us to improve addiction recovery outcomes for people, it will also help us to improve their overall health outcomes,” the commissioner wrote in January’s announcement.

In a June interview with WHYY, department spokesman Joel Avery said the idea was to treat addiction holistically.

But critics of the ban countered that it’s wrong for the city to make any chance at recovery contingent on giving up cigarettes, given that the opioid overdose crisis left more than 1,100 dead in Philadelphia last year.

“This policy erected a new barrier that I know will really hurt the people who probably need treatment the most,” said Brooke Feldman, an outpatient treatment provider and vocal opponent of the ban. “To me, it’s just senseless to make it harder to go into and stay in treatment when people are dying all around.”

Feldman and others fear that prohibiting tobacco in rehab will dissuade people from getting help in the first place, and force them to leave treatment early of their own volition. They also worry about outcomes — like Wienczkowski’s —  in which kicking people out for smoking will leave them with a lowered tolerance to use again, putting them at high risk for overdose.

In June, Community Behavioral Health issued a new directive to providers, advising them to discharge people for smoking only as a last resort.

“CBH expects providers to adopt a therapeutic, clinically based approach to CBH member behaviors that do not comply with program policies, including possession of prohibited items … including tobacco use in treatment settings,” the advisory read.

It went on to encourage providers to conduct an assessment of what might be triggering the patient to behave in a certain way and come up with “appropriate interventions,” tailored to the individual. The directive called for providers to note the reason patients were discharged on the medical record, so the department could make sure people weren’t being kicked out hastily.

For some treatment providers, however, that directive sent a mixed message.

“They don’t want us to discharge anyone for smoking but want us to implement the program,” said an inpatient facility administrator, who spoke on the condition of anonymity for fear of losing the job or CBH funding.

The administrator said the directive made it easier to get in trouble with CBH for kicking someone out for smoking than for simply letting them smoke.

As a result, the higher-ups at that treatment facility started turning a blind eye to people smoking, according to the administrator. Just that morning, the administrator said, someone had a book of matches fall out of her sock with no repercussions. People reek of smoke and aren’t kicked out. Someone was caught smoking in his room, which is supposed to result in an automatic discharge, with no consequences.

“It’s become a bit of a joke,” the administrator said.

The right choice, for some

Devon Barnes, 27, of Norristown, said quitting smoking while in rehab was the best decision he ever made. He wanted to take his music career more seriously and realized he couldn’t while he smoked.

Plus, he said, he didn’t really feel like he was out of his addiction mindset while he was still smoking cigarettes.

“At the end of the day, it freed me because there was nothing that anybody could make me do that I didn’t want to do just to get another one,” said Barnes, who was addicted to Percocet.

He now chews nicotine gum and said that although the ban was definitely the catalyst that got him to quit smoking, following through on it was his own decision. It would have been easy to smoke if he’d wanted to.

“I had 30 people in Philadelphia who would have come and given me a pack of cigarettes,” Barnes said. 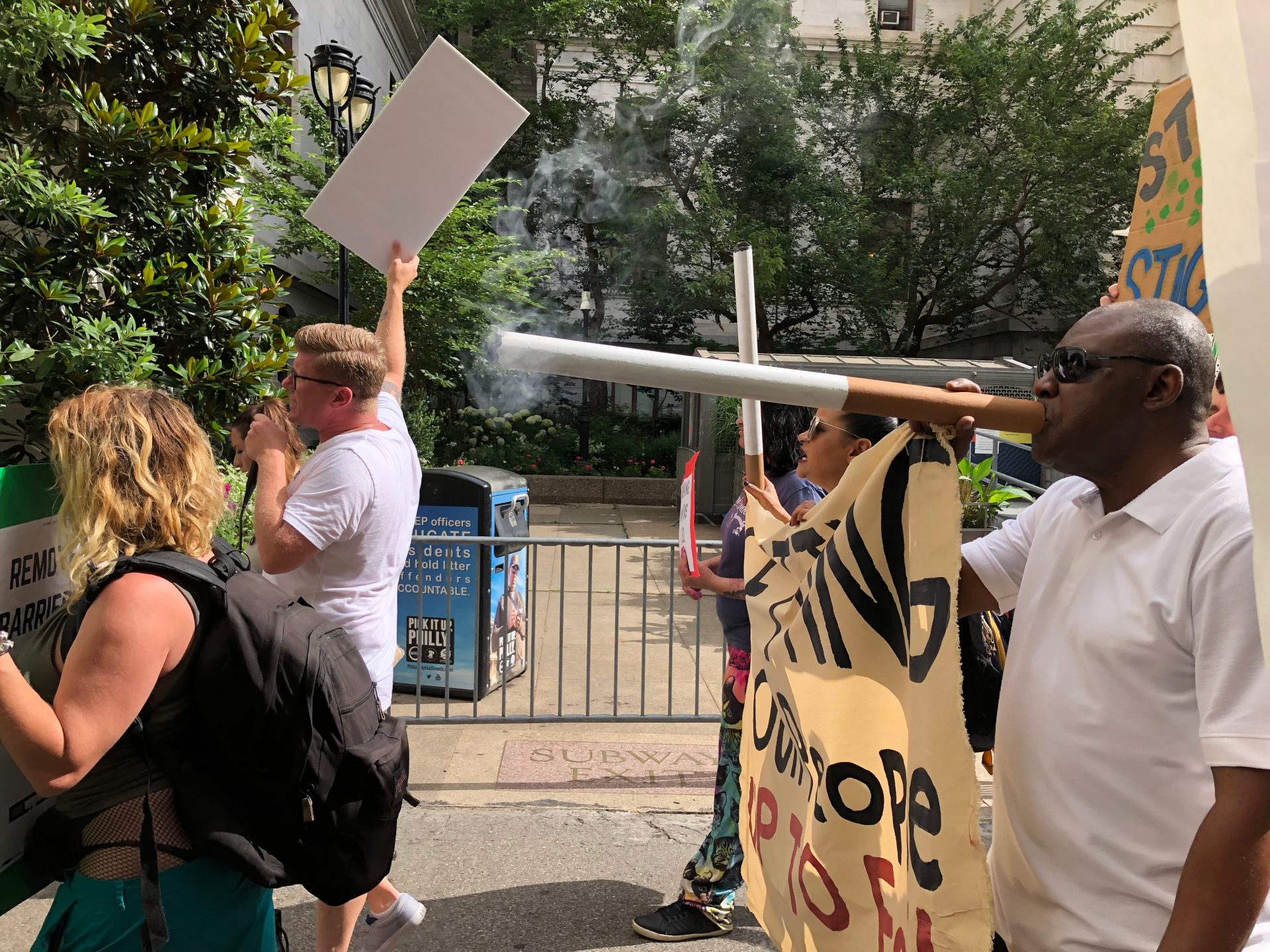 Michael Worthy has been in recovery for 10 years. He says if he hadn’t been allowed to smoke during his time in treatment, he doesn’t know if he would have made it through.

A black market for smokes rises

A number of treatment clients described the black market for cigarettes that the smoking ban has fueled.

“A loosie on the street is 50 cents; a loosie in Kirkbride is two for $5,” said Jesus Mercado, who was a client at Kirkbride Center in West Philadelphia from last October to March of this year. “You can make $50 off a pack.”

Mercado said it was common for rehab staff to sneak packs in to sell to clients, as well as visitors. Eventually, he said, he did quit smoking while in treatment because the habit got too expensive. But he started up again when he left Kirkbride.

“It’s one of the things I do for stress relief,” said Mercado, 30, who used heroin and cocaine “avidly” for five or six years before going to Kirkbride. “I already quit drugs. Leave my cigarettes alone.”

He said he has been sober since he completed treatment in March.

Brad Wienczkowski said he thought the black market for cigarettes not only enabled people to keep smoking but in fact reinforced what he called “addictive behavior.”

“It became contraband when it used to not be, and you have to hide what you’re doing and not get caught,” he said. “It’s like the same behavior as selling drugs in rehab, but it’s cigarettes, which is ridiculous.”

Another client, Daniel Jones, said he smoked all the way through his treatment, which ended in March, without being caught. He said being forced to stop smoking doesn’t work.

Even if facilities are trying to enforce the ban, providers and clients said it was easy enough to get away with, that smoking remained ubiquitous in rehab. Mercado said that at Kirkbride, the ban ironically made conditions inside the building worse.

“Instead of smoking outside, people were smoking inside,” he said.

Jennifer Hart, who was a counselor at Kirkbride until recently, had the same concern. She said the secondhand smoke in the hallways and bathrooms was unbearable.

“I complained to my supervisor that I would need to move offices because I have asthma,” Hart wrote in a text message.

Kirkbride officials did not immediately respond to a request for comment.

How to know if it’s working

In June, the Department of Behavioral Health and Intellectual disAbility Services hailed the program’s success. In a press release, spokesman Avery said the rate of people leaving treatment early hovered around 20% in the first quarter of 2019 — just as it had in the months before the ban. That same month, DBHIdS issued the advisory to providers, discouraging discharge for smoking and indicating that top officials would be reviewing the providers’ discharge protocols. But if the ban isn’t being enforced, and people are able to smoke, then it’s unclear how the program’s success could be accurately measured based on discharge rates.

The department also revealed that four city-funded treatment providers were granted extensions and implemented the ban in May instead of January. Department officials declined to reveal which providers were granted the extension or how many patients were admitted to those facilities so that WHYY could gauge whether the discharge rates would be substantially affected by their lack of participation in the ban for the entire period measured.

When asked whether any providers were found out of compliance with the tobacco-free policy, Commissioner Jones said the department reviewed providers’ discharge protocols.

“As we were made aware of outliers where non-alignment with policy was handled in a non-recovery-oriented way, we issued additional guidance, will continue to provide technical assistance to treatment providers and will follow up with individuals as needed,” he wrote in an email.

The department declined to comment on the consequences for a provider if it were found to be out of compliance with the smoking-ban policy.

In an email, Jones said the department plans to evaluate the program after it has been in effect for one year, but he declined to specify which metrics it would use to determine the program’s success.

Meeting people where they are

For his part, Wienczkowski is glad the ban wasn’t enforced. It’s what got him through treatment, he said. He described the best part of his recovery as sitting around with his peers, smoking and talking.

“Because then you don’t feel alone, there’s other people going through it with you,” he said. “But if you’re stuck inside not smoking, all we’re talking about is how mad we are that we can’t smoke.”

Brooke Feldman, the treatment provider who opposes the ban, said she understood that quitting smoking in recovery was the right choice for some. But she said the principle “meet people where they are” is at the core of harm reduction, an approach the city has taken in its support of other efforts to combat the opioid crisis, such as supervised injection sites and needle exchange.

In that spirit, she suggested that the city could offer options: some tobacco-free treatment centers, and others that allowed smoking.

“It’d be helpful for people to know which programs that is, so they can choose for themselves which would be the best fit,” Feldman said.

As it stands now, people have to wait until they get to treatment to know if they’ll be able to get away with smoking or not.

Health officials: It's time to give flu vaccine another shot