Voters cast their ballots at the Glen Echo Presbyterian Church polling location, Tuesday, Nov. 6, 2018, in Columbus, Ohio. Across the country, voters headed to the polls Tuesday in one of the most high-profile midterm elections in years. 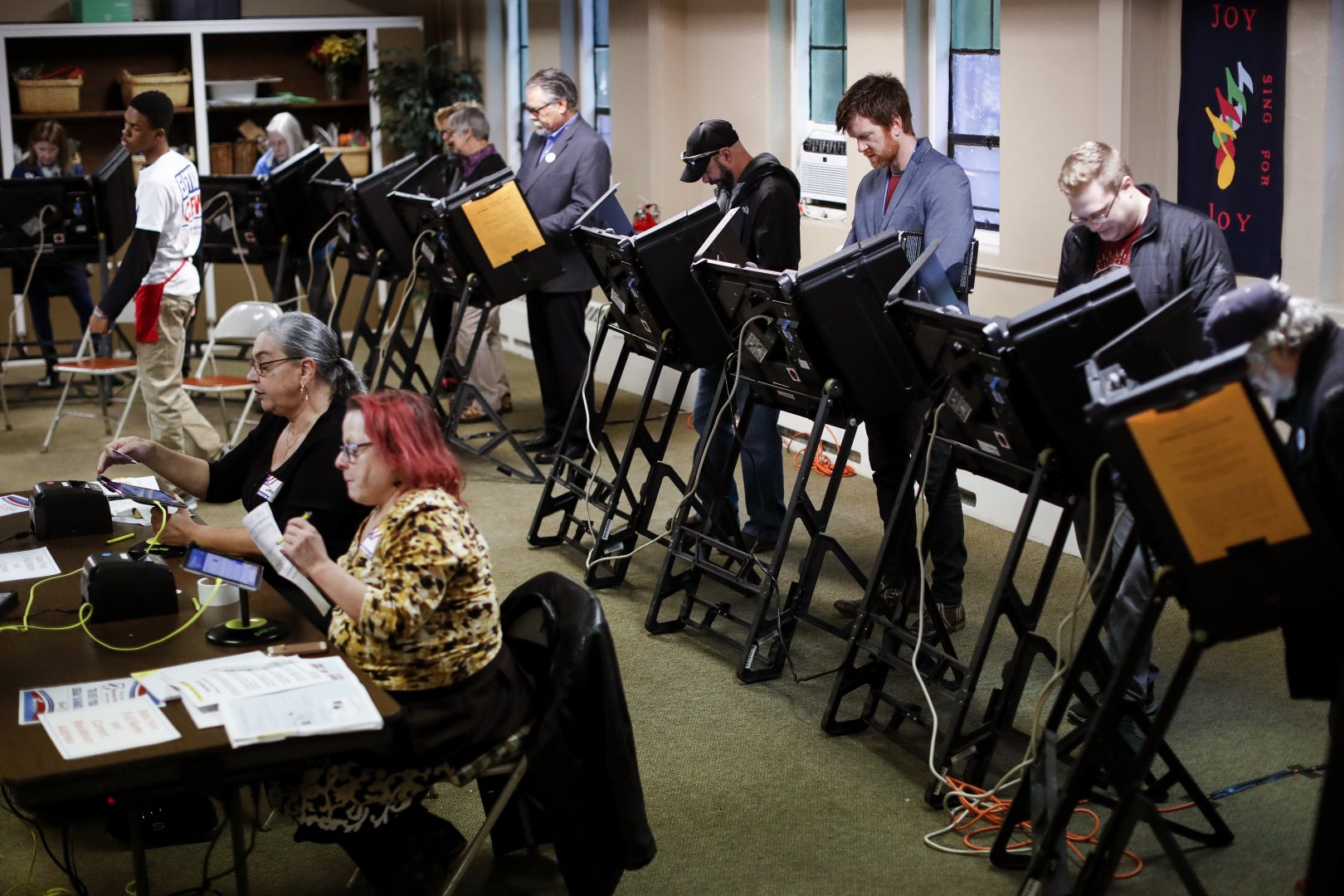 Voters cast their ballots at the Glen Echo Presbyterian Church polling location, Tuesday, Nov. 6, 2018, in Columbus, Ohio. Across the country, voters headed to the polls Tuesday in one of the most high-profile midterm elections in years.

The “Make Campus Great Again” initiative is offering dozens of participants training and free pizza, plus swag like campaign buttons and drink insulators to distribute.

It started with trainings at four schools in Ohio last week. Organizers describe it as a national effort, with similar swing state training sessions already held or planned for the University of Wisconsin-Madison, the University of Denver and college Republicans in Michigan.

It’s aimed at building on young voters’ enthusiasm and higher-than-usual turnout in last year’s midterm election and pushing back against any stifling of conservative voices in campus environments, said Mandi Merritt, a regional spokeswoman for the Trump-RNC reelection effort.

“It serves as a way to bring conservative supporters out of the shadows of college campuses and show that they have a home in the Republican movement,” Merritt said.

In the 2018 midterms, 67% of voters ages 18 to 22 voted for Democratic House candidates, according to AP VoteCast, which surveyed voters in last year’s election. Just 31% voted for Republicans.

The outreach and mobilizing also show how the GOP is enlisting the youngest voters in its field operations and fighting for Republican votes outside the party’s base, in a demographic that favored Democrats by significant margins in recent elections, said University of Cincinnati political scientist David Niven.

“If you think the election is going to be close, this is the margin of victory,” Niven said. “This is the 1% difference that helps you get over the top. … They are proclaiming: This is a state we need to fight for.”

In Akron, which last week had the first “Make Campus Great Again” session for more than 50 students from several northeastern Ohio universities, junior Brooke Bihlman said she and fellow members of the University of Akron College Republicans will be talking with students between classes and going door-to-door on weekends in a friendly competition with their Democratic counterparts on campus to see who can register the most voters.

“I think everyone in the club right now is just feeling very excited about the future and what we can do to help,” said Bihlman, 20. “Seeing hard work pay off is obviously something that keeps a lot of us going, so it starts with the little stuff right now.”

Persuading peers to actually cast ballots might be tougher. Eighteen-to-29-year-olds typically have a much lower turnout rate than older voters, a point noted by some of the Democratic presidential candidates already organizing heavily on campuses in Iowa, which has the first caucuses.

Support from young voters helped propel Democrat Barack Obama to victory in 2008 and 2012, and they heavily favored Hillary Clinton over Trump in 2016.

This time around, young Republicans touting Trump to their classmates point to a promising job market with the U.S. unemployment rate near a 50-year low , and to the president’s executive order earlier this year that required U.S. colleges to protect free speech on their campuses or risk losing federal research funding.

Even for a generation saturated in social media, there is no replacement for talking about the issues and candidates face-to-face with potential voters, said Seth Koellner, a Kent State University junior who leads the Ohio College Republican Federation.