He spent two years in a cubicle. Then he decided to return to a Juniata County dairy farm

Low milk prices are putting a strain on dairy farmers across the commonwealth.

Now, a group of more than 20 people, including state lawmakers and farmers, is preparing recommendations for how the legislature can help.

The chairman of the group is Brett Reinford, who grew up on a Juniata County dairy farm.

Back in high school, a nine-to-five job seemed pretty appealing to Reinford.

He left the family farm, went to college for business management, and then moved to Minnesota for a job with a cloud-based software company.

“Spent two years in a cubicle there and decided that wasn’t I was looking to do the rest of my life, and so my dad offered me an office job here on our farm,” said Reinford. 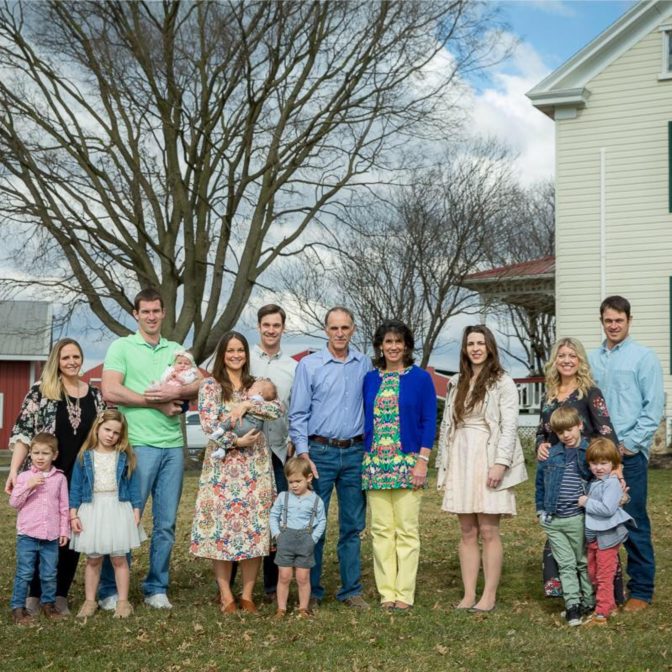 Brett Reinford, the fourth adult on the left, wearing the white shirt, is seen in this family picture for Reinford Farms.

Now, Reinford is back in Juniata County in charge of the farm’s finances and human resources.

Earlier this month, the 33-year-old was selected to serve as chairman of the Pennsylvania Dairy Future Commission.

State lawmakers created the commission this summer, saying the state needs to take action after hundreds of farms got out of the dairy business. In 2018, the number of licensed dairy farms in Pennsylvania dropped from 6,570 to 6,200, according to U.S. Department of Agriculture statistics.

Reinford says there are things farmers can’t control, like the price of milk. But he says they need to embrace change.

As an example, Reinford noted that his farm generates extra income by recycling food waste — more than 40,000 tons since 2008. His family is building a second digester to increase the amount of waste they can process and expect it to be up and running in December.

The Reinfords receive a fee for taking the food waste from grocery stores, food manufacturing companies and other clients who would otherwise pay a landfill to take the waste. Their digester then converts that waste into energy that the farm then sells.

Reinford doesn’t think recycling food waste is right for every farmer. But he thinks all farms need to innovate.

“I think every dairy farmer needs to be more progressive. We can’t be OK with just standing still,” Reinford said. “And so we always have to look forward to the future and what we can do better.”

Asked why the commission is needed, Reinford talked broadly about helping dairy farmers with environmental, workforce development and education issues, but he didn’t get into specifics.

The creation of the Pennsylvania Dairy Future Commission, proposed by Senate Majority Leader Jake Corman, R-Centre, is just one action lawmakers have taken to assist the struggling industry. Earlier this year, Gov. Tom Wolf’s administration awarded $5 million in grants to encourage dairy farmers to innovate and find multiple sources of revenue. A second round of grant applications is now open.

Lawmakers also agreed to what they called the PA Farm Bill, which Wolf’s office said would make $23.1 million worth of investments in the agriculture industry. That includes a variety of projects, such as money for increased nutrition and agriculture education for pre-kindergarten through fifth-grade students, low-interest loans, and investment in organic products.

The dairy commission’s recommendations are due next summer. It will then be up to the GOP-controlled General Assembly and Democratic governor to decide whether to follow them.

Wolf and General Assembly had one significant disagreement earlier this year over dairy legislation. In July, Wolf vetoed a bill that would have exempted milk trucks from weather-related commercial vehicle travel bans. Wolf said lifting the ban would endanger first responders, state police and milk haulers.

The bill’s prime sponsor, Republican state Rep. Martin Causer, who represents parts of north central Pennsylvania, said the exemption was needed because if dairy farmers can’t ship their milk, they have to dump it.

“I’m not sure what the governor fails to understand about the problems his travel bans have caused for our dairy industry, which is already struggling to stay afloat,” Causer said following Wolf’s veto.

Milk prices peaked in 2014. But then they plunged.

The United States Department of Agriculture tracks milk prices, and it uses a benchmark called price per hundredweight (cwt) of milk sold at average fat test.

Mark O’Neill, a spokesperson for the Pennsylvania Farm Bureau, said the state is “finally starting to see milk prices creep up.”

O’Neill said he hopes the commission comes up with short-term and long-term ideas for the dairy industry.

“Everything is on the table, including proposals to help farmers process and sell their own products from the farm, encourage farmers to create specialty or niche products that could garner value-added pricing and provide incentives to help attract new processing facilities for the marketing and distribution of fluid milk and milk products,” O’Neill said.