A farm in Stevens, Lancaster County.

"It's not something that our farmers want-to use Netflix and to play video games. This is part of running a business."

(Harrisburg) — As state and federal lawmakers return to their respective capitols this month, Pennsylvania’s farmers are hoping elected officials will take steps to help the agriculture industry.

Farming is already challenging, and in the digital age it can be even harder without access to a reliable internet connection.

The Pennsylvania Farm Bureau (PFB) is pushing for steps at the state and federal level to improve rural broadband.

“It’s not something that our farmers want … to use Netflix and to play video games. This is part of running a business,” said Mark O’Neill, PFB’s media and strategic communications director.

O’Neill said farmers are also looking for help in keeping trespassers off their land. To assist those efforts, PFB supports a “purple paint law,” which would legally recognize a special paint as a property marker.

The advocacy group is opposed to an effort to expand hunting to Sundays. O’Neill said they would take a neutral position if the legislation is amended to include certain provisions, including a requirement for hunters to get written permission before entering a property.

Some farmers are turning to agritourism ventures, such as pick-your-own pumpkin patches and corn field mazes, in an attempt to boost their bottom lines.

“One of the issues with it is, though, liability insurance is either extremely expensive or hard to even get,” O’Neill said. “So, a lot of our farmers who have these enterprises are losing a lot of the money they’re making to pay for insurance payments.”

The bureau supports a measure in the state House to protect farmers from most lawsuits in case of injuries during an agritourism activity. 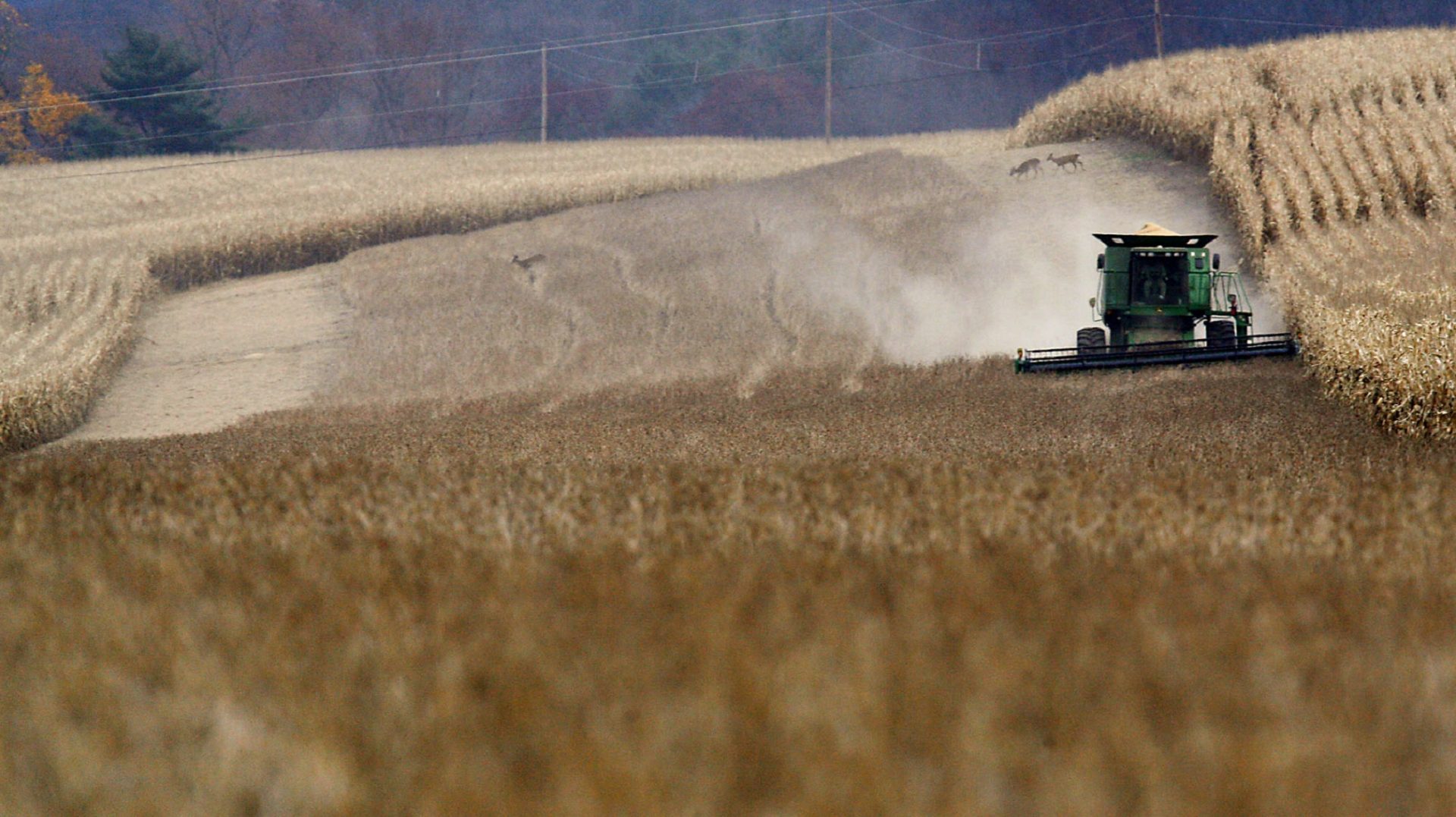 FILE PHOTO: Daniel Melhorn drives his combine through a field of soybeans in Danville, Pa., Wednesday afternoon Nov. 12, 2008 as three whitetail deer move from one section of corn to another behind the harvester.

At the federal level, the biggest issue for the commonwealth’s farmers is trade.

“Pennsylvania farmers trade most with Canada and Mexico, so obviously, there are potential benefits for that,” he said.

Farmers are eagerly awaiting resolution to the trade dispute with China that’s hitting producers of soybeans, dairy, pork and beef. Even if Pennsylvania farmers aren’t sending their products to China, they still feel the effects of the Trump administration’s tariffs.

“The price farmers receive for them are being impacted by this global market and this trade war,” O’Neill said. “So, they are seeing much less money than they were before this trade war began.”

He added many farmers are worried about permanently losing clients to other suppliers if a resolution isn’t reached soon.

Help for the dairy industry

Dairy producers are seeking relief in the form of getting “real milk” into schools.

Pennsylvania U.S. Senator Pat Toomey’s Milk in Lunches for Kids (MILK) Act would allow schools to serve whole milk and two percent milk and require the Secretary of Agriculture to revise regulations to exclude milk fat from the cap on saturated fat in school lunches. Currently, schools may only serve fat free or 1 percent milk with lunches.