Cheers and applause erupt during a plea to reopen the Philadelphia Energy Solution's Refinery in South Philadelphia as soon as possible.

Final numbers are not out yet, but with Hahnemann University Hospital and the Philadelphia Energy Solutions refinery closures, the city could be losing 2,500 union jobs.

Robert Campbell has worked for more than 20 years at the Philadelphia Energy Solutions refinery complex in South Philadelphia. Two months ago, a massive fire and explosion damaged parts of the refinery. Days later, Campbell’s boss announced the refinery was shutting down.

Campbell and all of his co-workers were laid off two weeks ago. He worked as a lab technician and was part of the United Steelworkers Local 10-1. This is the first time he has been unemployed for Labor day.

“What am I going to do [on Labor Day]? I’m going to be home hoping for work,” he said a couple of days ago.

The last time he was unemployed he was in his 20s and got a new job within two weeks. At 50 years old, getting a new job has proven harder, especially one that pays as well as his career at the refinery.

“The big disappointment at this point is that I’ve applied for 300 [jobs], I’ve had two interviews, and the one job paid less than unemployment. I’d make more not working, I mean, it’s depressing,” he said laughing. 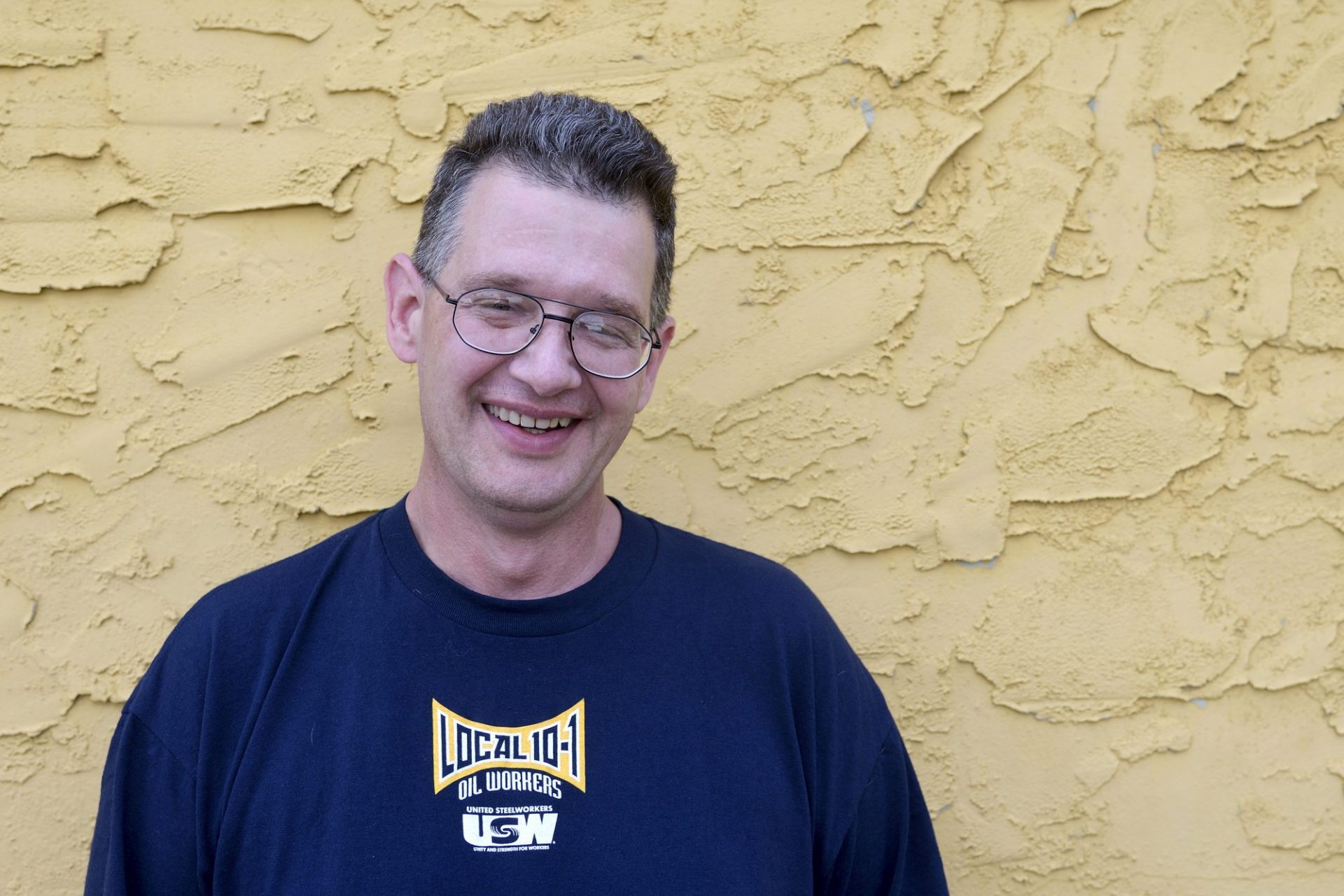 Former refinery worker Robert Campbell, 50, will be unemployed on Labor Day, a first for him he says.

Final numbers are not out yet, but with Hahnemann University Hospital and the Philadelphia Energy Solutions refinery closures, the city could be losing 2,500 union jobs.

Meg Shope Koppel, is the chief research officer for Philadelphia Works, the city’s workforce development board. She said refinery workers with highly specialized skills will have to be flexible to stay in the industry.

“You will probably have to pick up your feet and move. There are a few local jobs, so we know for instance that some of them are transitioning to other organizations here in the region, but would not be the vast majority of those workers,” she said.

About 1,000 union workers lost their jobs at the refinery. With the closure of Hahnemann, about 800 registered nurses and 700 hospital and healthcare employees who are union members have lost their jobs.

Shope Koppel said the loss will certainly have an impact on the number of union members in the city.

Many, like Campbell, are already applying for jobs out of the region. The city, state and unions are fighting to get those jobs back or to provide alternatives. But bills have to be paid, and workers can’t sit and wait. Campbell, a Philadelphia native, is currently applying for jobs in Utah, Colorado and Texas.

Patrick Eiding, the president of the Philadelphia Council AFL-CIO, represents more than 100 local unions. He said overall the number of union members in the city is growing because more workers want to have representation.

“So it’s an ebb and flow,” he said. “But it’s hard to compensate for something as severe as a whole refinery closing down.”

Samir Sonti, a spokesman for the Pennsylvania Association of Staff Nurses and Allied Professionals (PASNAP), said it’s a heartbreaking holiday weekend for nurses in the city.

“It’s a particularly dark Labor Day for us and I know the same is the case for the folks at PES refinery, who are also victims of Wall Street plundering good middle-class jobs,” she said.

Just this week, the founder of Philadelphia Energy Solutions said he wants to buy the shuttered refinery and put laid-off employees back to work.

His group is now the second to express interest in putting the refinery back in business in some way, but it’s unclear if either proposal will come to fruition.

New Mexico denies license for shelter for immigrant boys -- based on Pa. decision