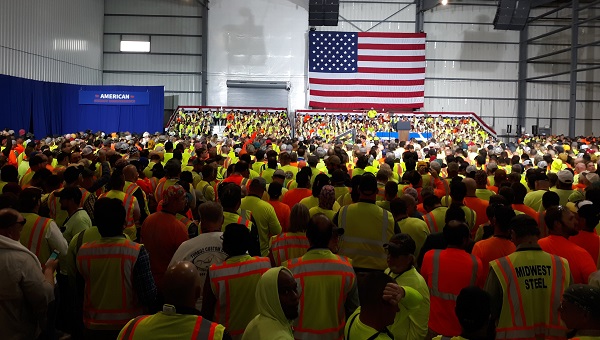 Workers at Shell’s soon-to-be-finished ethane cracker plant filed into a warehouse hours before President Donald Trump was set to speak Tuesday, milling about in yellow and orange safety wear as a soundtrack ranging from “Memories” to “November Rain” played over the sound system.

The focus of Trump’s visit is part of a continued push by the Trump administration to increase the economy’s dependence on fossil fuels in defiance of increasingly urgent warnings about climate change. And it’s an embrace of plastic at a time when the world is sounding alarms over its ubiquity and impact.

Work on the plant dates back years before Trump took office in 2017, and officials at the state level took the lead in bringing it about: Subsidies totaling over $1.6 billion financed the sprawling plant, whose construction has generated an estimated 5,000 jobs, with 600 slated to work on the site once it is operational.

White House spokesman Judd Deere said Trump would be touring the plant and delivering remarks, “touting his Administration’s economic accomplishments and support for America’s expanding domestic manufacturing and energy production.” Shell announced its plans to build the complex in 2012, when President Barack Obama was in office.

In a background call with reporters Monday, a White House official acknowledged that the plant predated Trump. Still, the official said, the site is fitting backdrop for the speech in that “it shows the importance of having a broader economic strategy which starts with energy dominance.

“This facility shows the benefits of a comprehensive strategy on dealing with the revival of manufacturing in the United States,” the official said.

Meanwhile, Democrats tried to make Trump’s support of fossil fuels cut both ways. In a statement Monday evening, the state party noted that the nearby Bruce Mansfield coal-fired power plant — once the largest in the state — announced a final shutdown this fall.

“Only a fool would come into this community, in the midst of a massive economic setback, to gloat about how great things are going,” the statement quoted state party chairwoman Nancy Patton Mills saying.

Economic conditions in western Pennsylvania — and across the rest of the country — are regarded as strong after a years-long economic expansion begun under Obama and built upon during the Trump years. But Democrats have been flagging exceptions in advance of the 2020 elections.

Environmentalists also say the president’s visit is significant – just for the wrong reasons.

“His presence in Beaver [Tuesday] will signal his strong support for the petro industry. And that’s exactly the wrong signal to be sending out right now,” said Matthew Mihalek, executive director of the Breathe Project.

Given the threat of global climate change, “We think this is the wrong direction for the entire Ohio Valley, because it will lock into place the wrong infrastructure at the worst possible time,” Mihalek. “It’s a structure that will be built for 50 or 80 years, and we’re severely concerned that it will give the Ohio Valley a reputation for pushing the planet over the edge.”

The plant, he said, is permitted to release 2 million tons of carbon dioxide, the gas principally responsible for global warming.

Environmentalists are also worried that the plant will be a precursor for a network of similar facilities to be built in the region, and serviced by the Appalachian Storage Hub, a depot that would store gas for future use by plastics manufacturers. The Hub would store the gas, freshly removed from deep within the earth, back underground, providing industrial users a steady supply immune to price changes or sudden shortages.