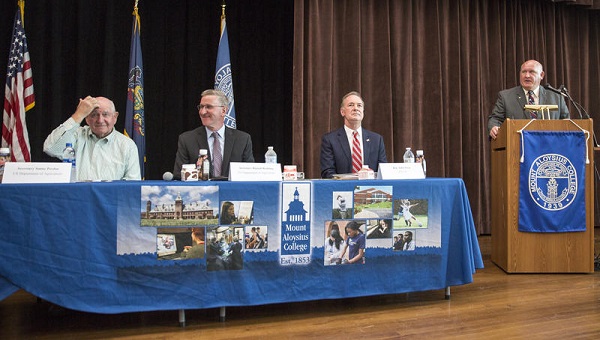 State and federal officials hosted a summit at Mount Aloysius College Monday to talk about legislation that would help the dairy industry. (Min Xian/WPSU)

Pennsylvania dairy farmers have been under continuous pressure of decreasing fluid milk consumption in the country and tight markets met by production surpluses and tariffs. Congressman Glenn Thompson led a summit at Mount Aloysius College in Cambria County Monday, reassuring producers and farmers that a handful of new policies would offer meaningful assistance to the industry.

Voluntary insurance, known as the Dairy Margin Coverage program, issues payouts to farmers when their profit margins fall below a certain level. In July, the Department of Agriculture began paying about $100 million dollars in insured milk production.

About 100 people, including farmers, producers and state government representatives, attended. The panel at the summit included U.S. Secretary of Agriculture Sonny Perdue, Pennsylvania Secretary of Agriculture Russell Redding and Congressmen Fred Keller and John Joyce. They expressed support for the Farm Bill but also for the Trump administration’s proposed United States-Mexico-Canada Agreement (USMCA).

Thompson said, in addition to current safety net measures, USMCA will expand markets for dairy farmers. A critical component in the proposal is eliminating a category of dairy products in Canada, which Thompson said hurts U.S. dairy exports.

Perdue said USMCA is not only important for the region, but also sends a signal of broader trade policies of the United States.

“If we can’t do a deal, an agreement, with our closest neighbors and two of our largest trading partners, the world’s gonna say, ‘Why should we do a trade deal that way?'” Perdue said.

Maggie Curtis, a dairy farmer from Corry, Pennsylvania, said that corporate consolidations are putting family farms out of business. She hopes more local producers can process their own products and trade freely in the long run. Redding responded that the state is working to get investments that would keep family dairy farms in Pennsylvania.

Thompson also promoted a bill he sponsors that would bring whole milk back to schools.

“There’s legislation that we need to do, but there’s a lot of other things we need to keep doing,” he said.