A man wears a "Don't Tread On My 2nd Amendment Rights" hat in the state Capitol during a rally on May 6, 2019.

How a ‘red flag’ law could work in Pa. — and what stands in its way

The ACLU of PA dropped its opposition. The NRA hasn't.

In the wake of mass shootings in Texas and Ohio, President Donald Trump endorsed “red flag laws” that empower law enforcement officers to take guns away from people who are considered a risk to themselves or others.

Some Republicans in Congress are warming up to this particular gun control law.

In Pennsylvania, Democratic Gov. Tom Wolf, a couple of Republican lawmakers from the Philly suburbs, and gun control advocates are urging the GOP-controlled General Assembly to pass such a measure here.

Here’s what you need to know about how such a law could work in the state.

What other states do

Seventeen states and Washington, D.C., have an extreme risk protection order law or similar measure. These laws permit a court to order someone to surrender firearms if they are considered a risk to themselves or others, according to the Giffords Law Center to Prevent Gun Violence, which supports increased gun restrictions.

Five other states — Florida, Rhode Island, Vermont, Indiana and Connecticut — only allow law enforcement officers or other state officials to make the request to a court.

He’s talked about using extreme risk protection orders to try to prevent mass shootings, but he’s also focused on how this law could help prevent suicides, particularly in rural areas of the state.

He said the orders have worked in other states and that they protect due process rights. 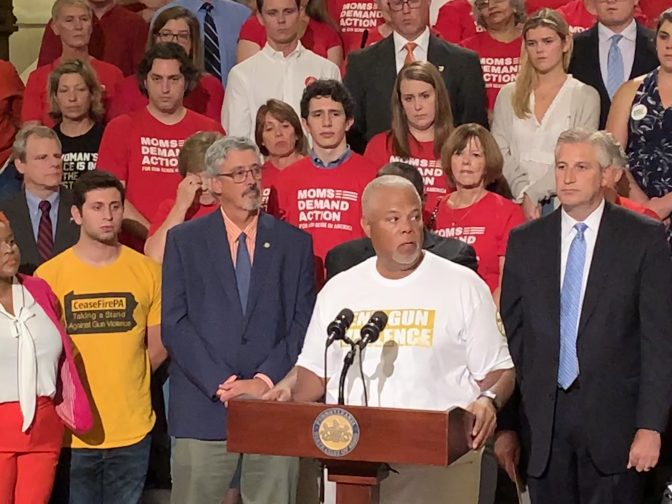 “If President Trump, Lindsey Graham, Speaker Nancy Pelosi, Chuck Schumer, Senator Bob Casey and Senator Pat Toomey can all agree that extreme risk protection orders are a necessary tool against gun violence, then so can we,” Stephens said at a Harrisburg rally on Wednesday.

Earlier this year, at another Harrisburg rally, state Rep. Jennifer O’Mara, a Democrat from Delaware County, talked about how her father, a career firefighter, killed himself with a gun 16 years ago. She said her family could have used an extreme risk protection order to try to save him.

“This was a tragedy that sent our family reeling,” O’Mara said. “And we are not the only family.”

How the proposal works

Under Stephens’s bill, a family member, intimate partner or law enforcement officer could present evidence to a court that someone is an immediate threat to themselves or others.

A Common Pleas judge could immediately issue an interim extreme risk protection order, barring the defendant from possessing guns. A judge would be required to schedule a full hearing within 10 days. If the interim order is approved by a hearing officer, such as a court-appointed master or magisterial district judge, then the interim order would last for a shorter period.

After a full hearing, the ban could last three months to one year.

Defendants would be entitled to an attorney, and if they meet income guidelines, they could receive a court-appointed attorney.

What risk factors judges would consider

Under Stephens’s bill, a judge or hearing officer would be required to weigh eight main factors when deciding whether to issue an order:

Why the ACLU of Pennsylvania dropped its opposition

In May, the ACLU of Pennsylvania explained why it moved its position from opposed to neutral.

Elizabeth Randol, the organization’s legislative director, called conversations with Stephens “productive and fruitful.” She said he made a number of changes to increase due process and constitutional protections.

For instance, Stephens changed the legislation to:

On the latter change, those opinions could be useful for defendants if, for instance, they later ask for the order to be terminated. Defendants could point to specific reasons cited in a judge’s order to argue why circumstances have changed. A judge’s opinions in these cases would not be available to the general public; just the defendants and the people asking the court to remove their gun rights.

Randol said the group was disappointed about one provision that remains in the bill: The creation of a new criminal offense for failing to relinquish a gun or gun license as required by an order.

In January, the group’s Institute for Legislative Action put out a list of criteria for the kind of extreme risk protection order it could support.

Stephens’s bill meets some of the NRA’s criteria. There would be criminal penalties for anyone who brings false charges, for instance.

But Stephens said a big sticking point is the NRA’s objection to temporarily removing a person’s gun rights through an “ex parte” proceeding, one that the defendant doesn’t participate in.

The NRA said “Second Amendment rights should only be temporarily deprived after a hearing before a judge, in which the person has notice of the hearing and is given an opportunity to offer evidence on his or her behalf.”

But Stephens said it’s important for judges to have the option of ordering guns relinquished without the defendant present.

“When someone’s in crisis, and you’re worried that they’re going to go out and commit a rash, irreversible act like a mass shooting, you know, time is of the essence,” Stephens said.

Other gun rights groups echoed the NRA’s concerns about the legal rights of gun owners, particularly for the interim orders. 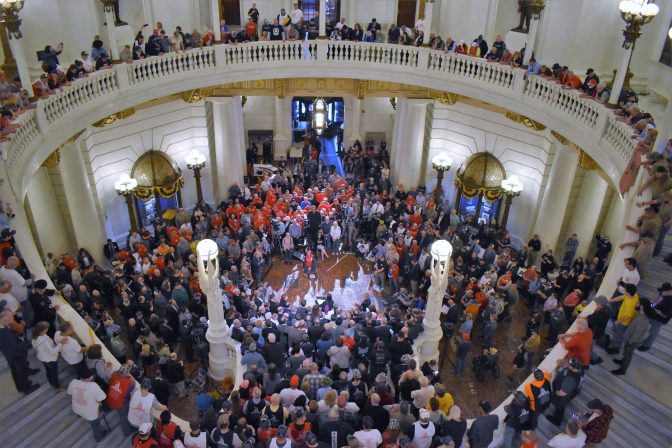 Hundreds of demonstrators gathered at a Second Amendment rally in the state Capitol on May 6, 2019.

Erich Pratt, senior vice president of Gun Owners of America, compared extreme risk protection orders to the movie “Minority Report,” in which police arrest people for murders that are predicted to happen.

“Boom. A judge takes the word of somebody who may have a vendetta against you, and you lose your guns,” Pratt said at a Harrisburg gun rights rally in May.