Two boys ride in the back of a horse-drawn buggy stopped at a traffic light, Wednesday, May 29, 2019, in Lancaster County, near Gap, Pa.

Pa. township puts hold on proposal to require horse diapers, rubber horseshoes, hoping to ‘work it out’ with Amish

“I don’t think they can regulate the Amish way of life. The law is on your side." 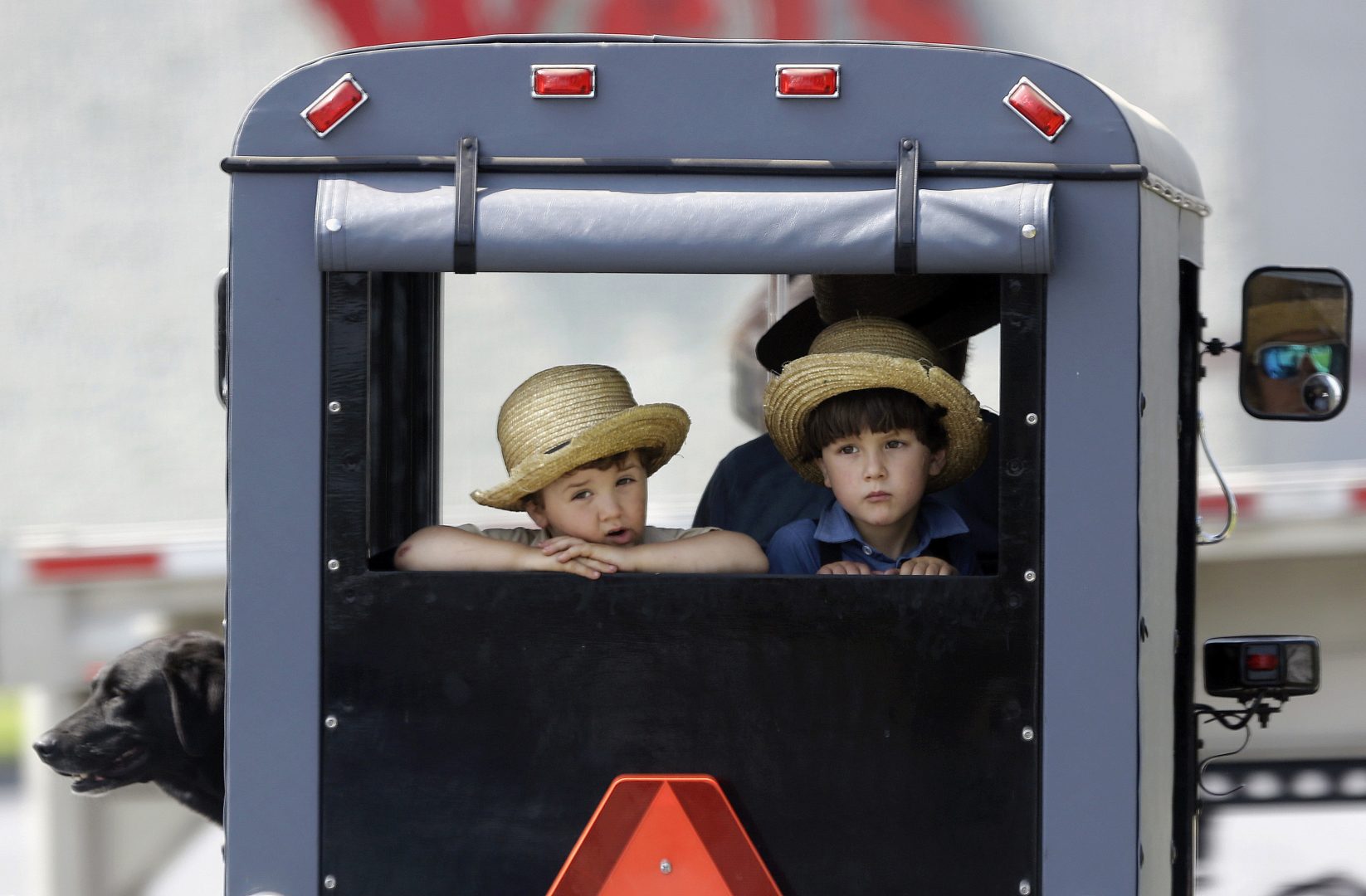 Two boys ride in the back of a horse-drawn buggy stopped at a traffic light, Wednesday, May 29, 2019, in Lancaster County, near Gap, Pa.

(Elimsport) — The feelings were mixed as expected but in the end the Washington Township supervisors in Lycoming County did not act on ordinances that would require horses to wear poop collectors and rubber horseshoes.

A crowd of about 200, half of whom were Old Order Amish, jammed the township fire hall in southern Lycoming County Monday evening where pros and cons of those two proposed regulations were aired.

Little was said about a third ordinance that would require the registration of carriages and buggies and township. Solicitor Douglas N. Engelman said it might go away.

He told the crowd there would be no vote on the ordinances until the September meeting at the earliest, leaving time to meet with the Amish and their attorney, Clifford A. Rieders, to work on a compromise.

“I hope we can work it out with the Amish,” he said, holding out the possibility the ordinances that address health and safety issues could be modified.

“We’re happy to sit down and talk this out,” Rieders said. “There is enough hate in this world.”

Rieders told the supervisors the ordinances are a religious matter because they would violate Amish law.

“I don’t think they can regulate the Amish way of life,” he said while meeting with Amish attendees after the meeting. “The law is on your side.”

“Taking horseshoes off horses would be like taking shoes off us,” said Jacob Zook, one of the Amish who spoke during the meeting. The rubber shoes are not practical and they take life out of a horse’s feet on roads, he claimed.

Engelman explained the horseshoes that are damaging the paved roads are ones with a metal piece welded to them that make them jagged.

Several of the non-Amish who spoke cited the number of piles of manure they had counted on roads. Dick Secules voiced safety concerns for motorcyclists and Ed Ulrich said he did not appreciate walking in manure to get his mail across the street.

There was support for the Amish, also. To those who complained about the manure, Tina Lawer suggested: “If it bothers you that much go buy a pooper scooper.”

Gaye Jenkins drew applause when she said: “They are our neighbors. They have been wonderful to us in many ways.”

What about the spreaders that leave manure on roads when they go from one field to another, one person asked.

Meeting with the Amish after the meeting, Rieders asked how many of them voted and no hands were raised. He suggested they might want to think about registering because there are enough of them to swing an election in the township.

When several asked about getting state lawmakers involved, he suggested arranging a meeting with state Rep. Garth Everett, the Republican who represents that part of Lycoming County. They would have more impact with him if they were voters, he told them.

Many of the Amish in the township are second generation of those who migrated from Lancaster County.

This story has been updated to correct a typo. The attorney’s name is Clifford Rieders, not Riders.