A lineman for Pennsylvania Power and Light works to remove a tree branch which was hanging on a transmission line along East Market Street in Danville, Pa., Wednesday afternoon, June 11, 2008 as work continued cleaning up from Tuesday night's storms which cross the area and left thousands with out power.

The cost of the project will be passed along to all Pennsylvania ratepayers. 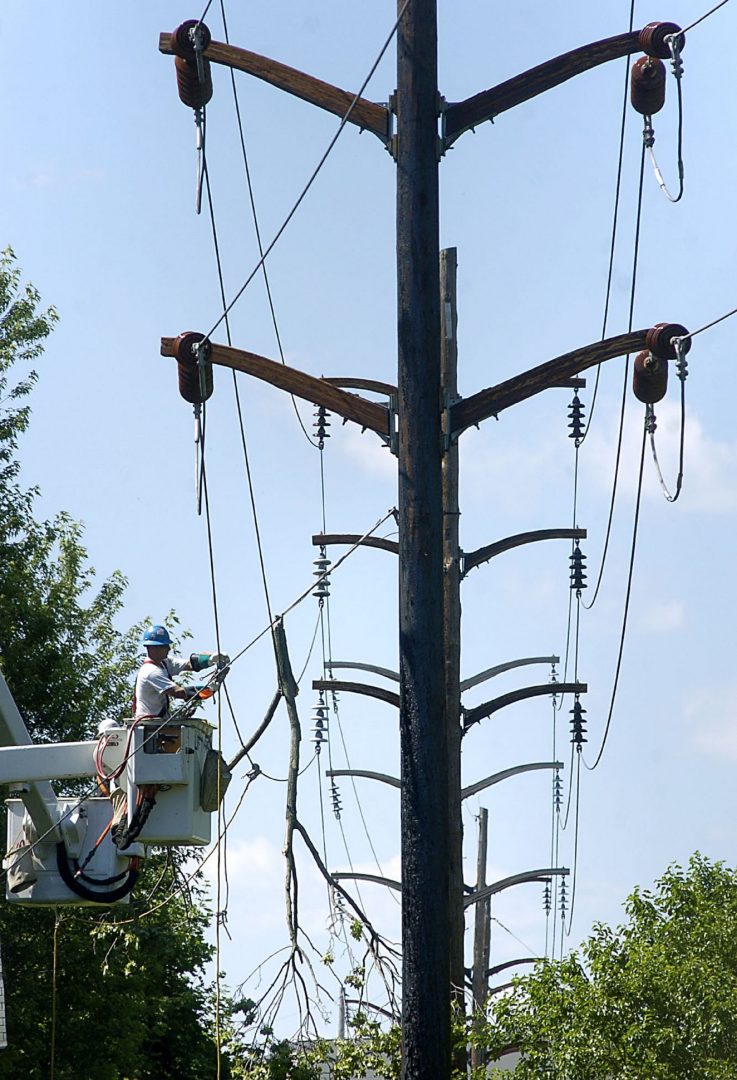 A lineman for Pennsylvania Power and Light works to remove a tree branch which was hanging on a transmission line along East Market Street in Danville, Pa., Wednesday afternoon, June 11, 2008 as work continued cleaning up from Tuesday night's storms which cross the area and left thousands with out power.

A proposed multi-million dollar above-ground transmission line project, which would go through Franklin and York counties, will financially affect all Pennsylvania ratepayers, but by how much still remains a mystery.

Both the project’s path and its use of eminent domain must be approved by state regulators in Pennsylvania and Maryland before the $372 million Independence Energy Connection project can break ground. The cost of the project is passed along to ratepayers.

“My concern remains: how much will this cost Pennsylvania ratepayers when its benefits go to DC customers,” said state Sen. Kristin Phillips-Hill.

The project was identified by PJM Interconnection, the regional grid transmission operator, four years ago. It’s purpose is to alleviate congestion on the grid, and to allow for more reliable energy to flow south.

Since its inception, the project’s price has increased $50 million to $372 million.

When first introduced, PJM experts said the project would provide “$866 million in congestion cost-savings in the first 15 years” once it’s in service. However, industry experts said in written testimony that the project is going to increase costs to Pennsylvania ratepayers while reducing energy costs to customers in Maryland and Virginia.

In order for the project to be approved, PJM must prove there’s a need for it. One standard used in Pennsylvania is that the project’s cost may not outweigh its benefits by a 1.25:1 ratio.

Phillips-Hill said she doesn’t believe that point has been solidly proven.

“Ultimately, I want to see my constituents be able to have their land remain intact,” the York County Republican said. “And I want to make sure that Pennsylvania ratepayers are protected.”

Evidentiary hearings were scheduled before the Pennsylvania Public Utility Commission on August 7 and August 8, when two administrative law judges were to listen to testimony and cross examination.

Those dates have recently changed. They are now scheduled for October 2 and 4.

The hearings are among the final steps before the project is approved or denied by commissioners. The hearings were initially scheduled in June, but Transource Energy, hired by PJM to gain all required approvals to construct the project, asked commissions in Pennsylvania and Maryland for more time to work on a settlement agreement with affected landowners.

“The case is still being litigated and much could happen before the case could come before the Commissioners for a final decision,” PUC spokesman Nils Hagen-Frederiksen said.

After the commissioners have thoroughly reviewed the case, it will be scheduled for a vote at a public meeting, Hagen-Frederiksen noted.

Transource officials said they were open to exploring “an alternative route” in the eastern portion of the project, spokeswoman Abby Foster said. The alternate route is not expected to affect as much land and would utilize existing rights of way.

PJM believes the project needs to be built, or a “new solution would be required before 2023 in order to maintain electric reliability in the area,” Foster explained.

Stop Transource in Pennsylvania and Maryland, a group formed to protest the project, still wants it to go away.

“The issue of eminent domain is still a threat until the settlement is agreed,” said southern York County farmer Barron Shaw, an active member of the group.

Shaw farms on land in York County and in northern Maryland, where the project has been proposed for construction. He and other farmers have expressed concern that this project will set a dangerous precedent for future use of eminent domain in Pennsylvania.

Typically, eminent domain is used when the commonwealth takes private property for “public use” in return for compensation. But, in this case, a private company is asking the state for the right to use eminent domain to seize land for a private use.

Utility companies are an exception. Transource filed to become a utility company in Pennsylvania in order to be allowed to construct the project.

“Eminent domain can only be used if the PUC approves the project, which they have not,” Shaw said.

Maryland regulators haven’t made a decision yet either. However, Maryland Gov. Larry Hogan has said he doesn’t support the project and has asked that PJM go back to the drawing board.

Over a year ago, the Republican Governor asked PJM to stop pursuing the project until it finds a way to use existing “rights of way, instead of taking large swaths of actively-used farmland.”

“Maryland prides itself on our rich agricultural heritage,” Hogan wrote.