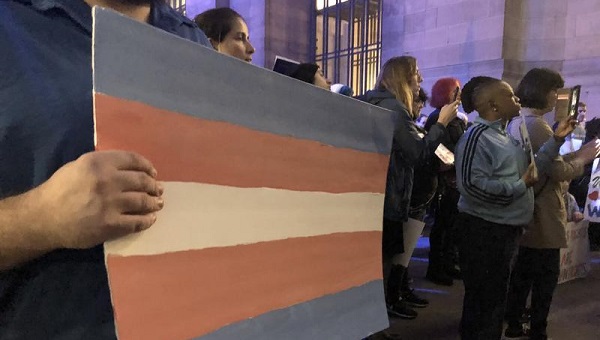 The transgender flag is held at a rally for equal rights on Nov. 1, 2018. (Katie Blackley/WESA)

Pennsylvanians who prefer not to be identified as male or female will soon have a gender-neutral option for their state-issued identification, including driver’s licenses.

The Pennsylvania Department of Transportation expects to have the new procedure in place by the middle of next year. It will let motorists use “X” as a third option to indicate gender.

Pittsburgh resident Tabitha Walker identifies as gender fluid and uses they/them and he/him pronouns. Walker said the option to identify outside of the gender binary might seem like a small change, but is meaningful for many in the LGBTQ community.

“I really don’t like ‘she.’ It doesn’t feel right for me and it never has,” Walker said. “And I think that this is very important to our community because so many trans people struggle with depression and dysphoria.”

The state joins more than 10 others that have rolled out plans to give residents more options.

Department of Transportation spokesperson Erin Waters-Trasatt told the Daily Item of Sunbury the agency is able to make the change on its own and does not need authorization from the state legislature.

Waters-Trasatt said the agency plans to follow “a systematic process” to adopt the “X” option. She said the state’s vehicle code provides authority for the state transportation department to make the change, and officials do not believe it will conflict with federal REAL ID regulations.

Democratic Gov. Tom Wolf said that the department made the decision, but it’s consistent with his opinions about equity and fairness.

“I believe that we ought to recognize and be supportive of folks who are looking to figure out what their gender identity is,” Wolf said Wednesday after a Capitol news conference on another topic.

Brogan McGowan is a non-binary queer Pittsburgher and said for people like them, having an ID with a gender that doesn’t represent who they are can be dangerous.