Cash assistance program for the poor in Pa. ends today 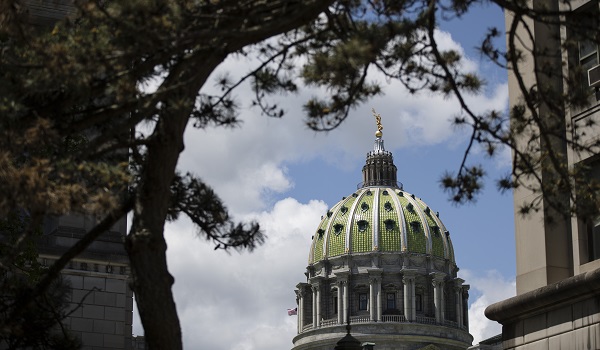 Shown is the Pennsylvania Capitol in Harrisburg, Pa., Monday, May 6, 2019. (AP Photo/Matt Rourke)

(Harrisburg) — Despite a legal aid group asking the commonwealth court to grant an injunction, a small cash assistance for the poor has ended, effective Thursday.

The GOP-controlled legislature spearheaded a contentious repeal of the program in this year’s state budget.

It had served about 11,000 people statewide and gave them roughly $200 per month. The governor’s office has estimated it would have cost about $24.5 million out of the $34 billion budget.

When House and Senate Republicans were moving the repeal, they added a provision that allocated money for Philadelphia hospitals.

Democratic Governor Tom Wolf said that provision tied his hands, forcing him to sign the legislation.

Now, Wolf’s administration is in the awkward position of having to defend the repeal in court.

The state Department of Human Services is the defendant in the lawsuit from Community Legal Services of Philadelphia. The department has hired an outside firm, Philadelphia-based Blank Rome LLP, to argue the case.

A spokesman for the governor said it is a standard measure, and that “complex constitutional litigation” sometimes requires the “additional resources of outside firms.”

Lead Community Legal Services attorney Maria Pulzetti said she and her colleagues were hoping the court would act before the program ended.

“Our main concern is for our clients,” she said. “Our clients will not be having any subsistence income.”

So far, she said, they have heard nothing from the court.

That doesn’t necessarily preclude an injunction. But Pulzetti noted, it does mean General Assistance recipients may struggle with the “stability of their housing and their conditions of living and their health and their food security.”

General Assistance was repealed once before, in 2012. After six years of litigation a court overturned the repeal last year, saying lawmakers had passed it too quickly, violating Article III, Section 1 of the constitution, which says legislation must be considered on three different days without significant changes.

But in their decision, the justices also footnoted a parallel.

The plaintiffs’ argument against the repeal this time relates to the single subject rule, which they say lawmakers violated by passing the repeal alongside Philadelphia hospital money.