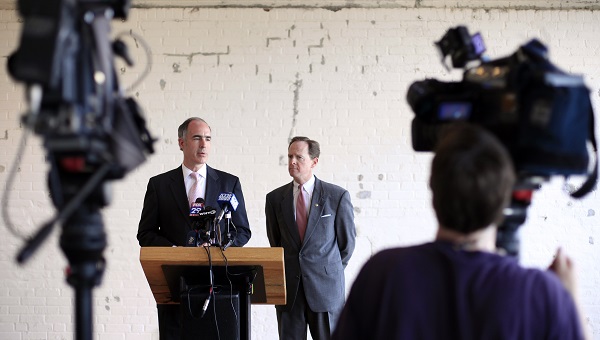 Senators Casey and Toomey in Philadelphia in 2011. (Photo by AP)

(Philadelphia) — Pennsylvania’s US Senators are making a bipartisan push to measure the impact of a Philadelphia hospital’s imminent closure.

Now, the owner has filed for Chapter 11 bankruptcy, and the hospital is slated to shut down in September.

Hahnemann is a safety-net hospital, which means it aims to serve patients regardless of their insurance status. It treats about 55,000 people a year and employs around 2,500–including 550 medical residents.

Republican Senator Pat Toomey and his Democratic counterpart Bob Casey want the federal Health and Human Services Department to lessen the impact on all involved.

They’re particularly concerned about the residents.

The Affordable Care Act stipulates if a hospital closes, Graduate Medical Education slots must be redistributed. Casey and Toomey want the government to make sure the slots stay in Pennsylvania.

Along with the senators, four congressional members signed on asking for federal help.

This isn’t the first time Hahnemann has become a political issue.

Democratic Presidential candidate Bernie Sanders made a trip to the facility recently to argue for an end to private healthcare.