U.S. Rep. Scott Perry speaks to the crowd during a town hall at Hummelstown Fire Department on July 30, 2019.

(Hummelstown) — A midstate congressman is expected to be a top target for national Democrats in 2020.

Tickets for the event in Dauphin County ran out quickly.

About an hour before it began, a few dozen people from progressive Indivisible groups gathered outside the Hummelstown Fire Department. They wanted Perry to let more people inside.

Inside, Perry’s staff set up seats for about 100 audience members. When the event started a few dozen of those seats were empty — although some later filled up. 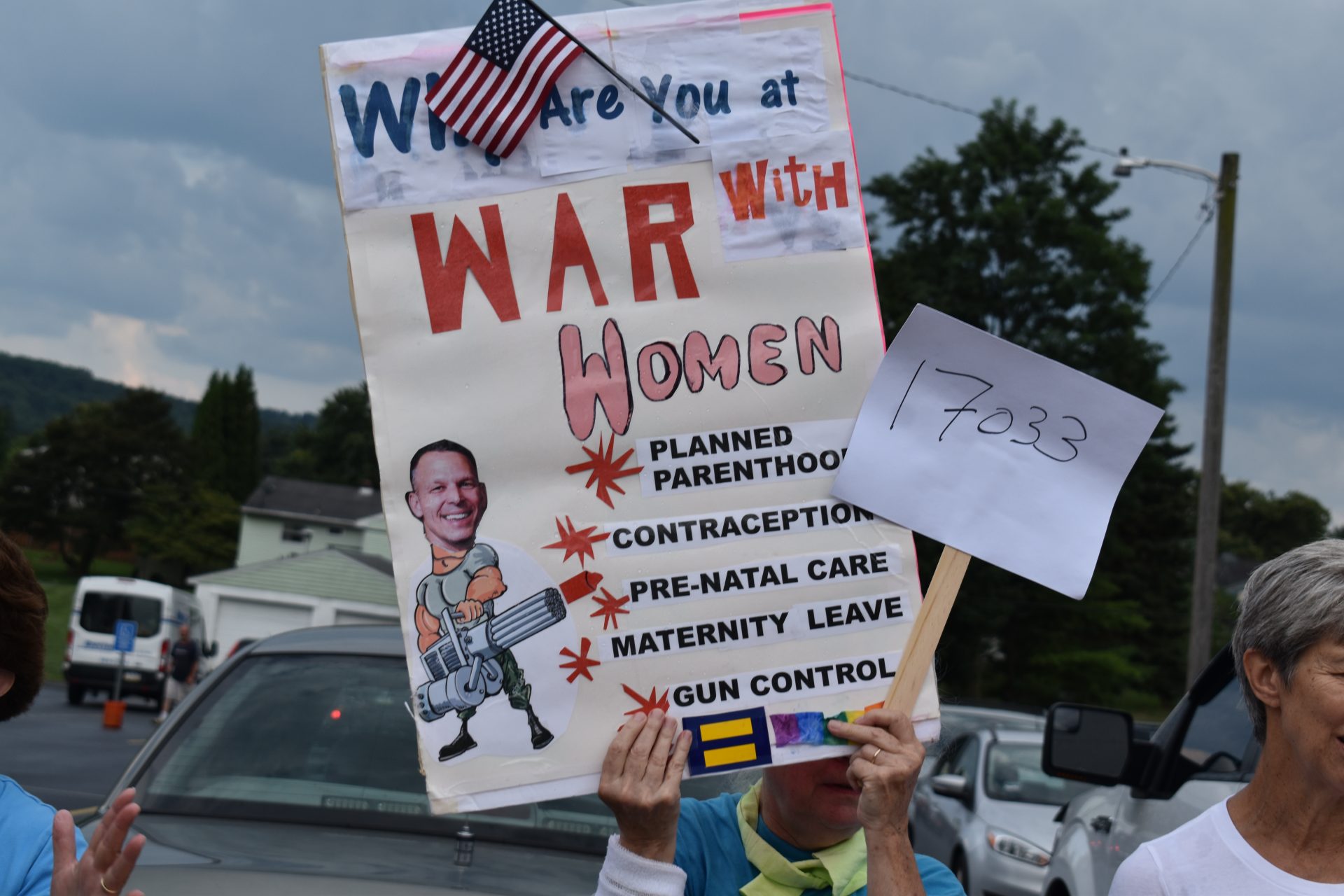 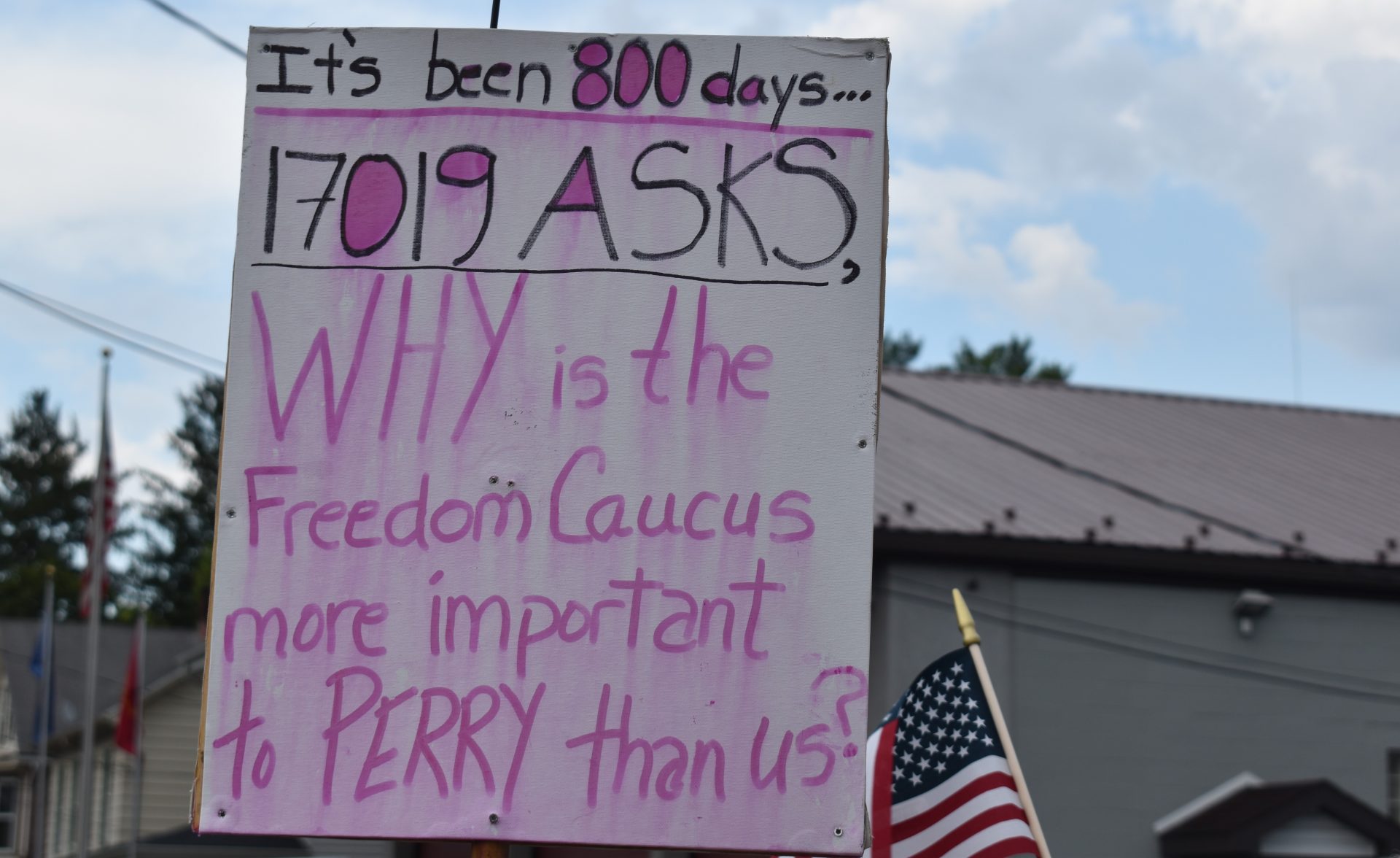 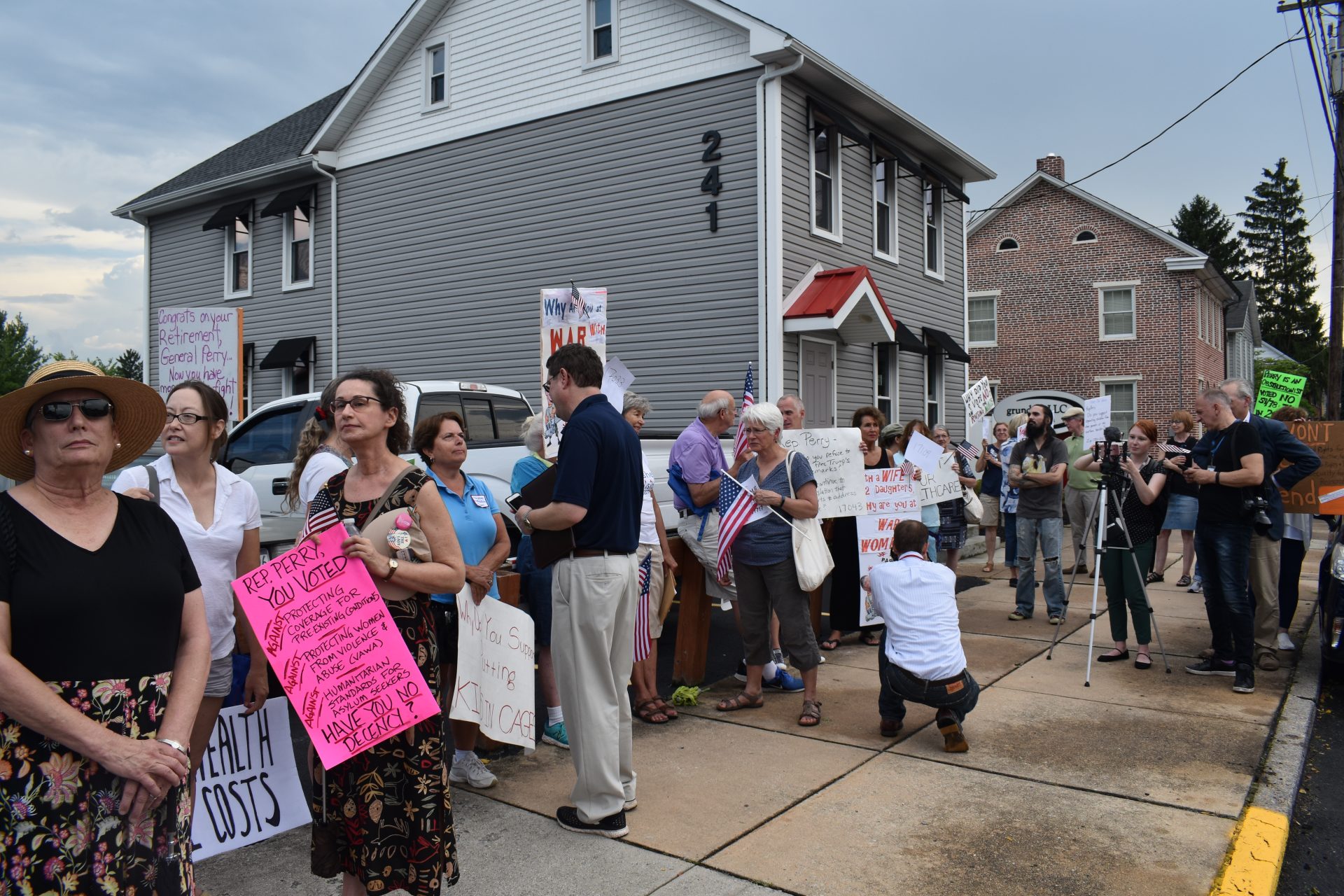 Protesters gathered outside the Hummelstown Fire Department on July 30, 2019, ahead of a town hall hosted by Republican Congressman Scott Perry of Pennsylvania. 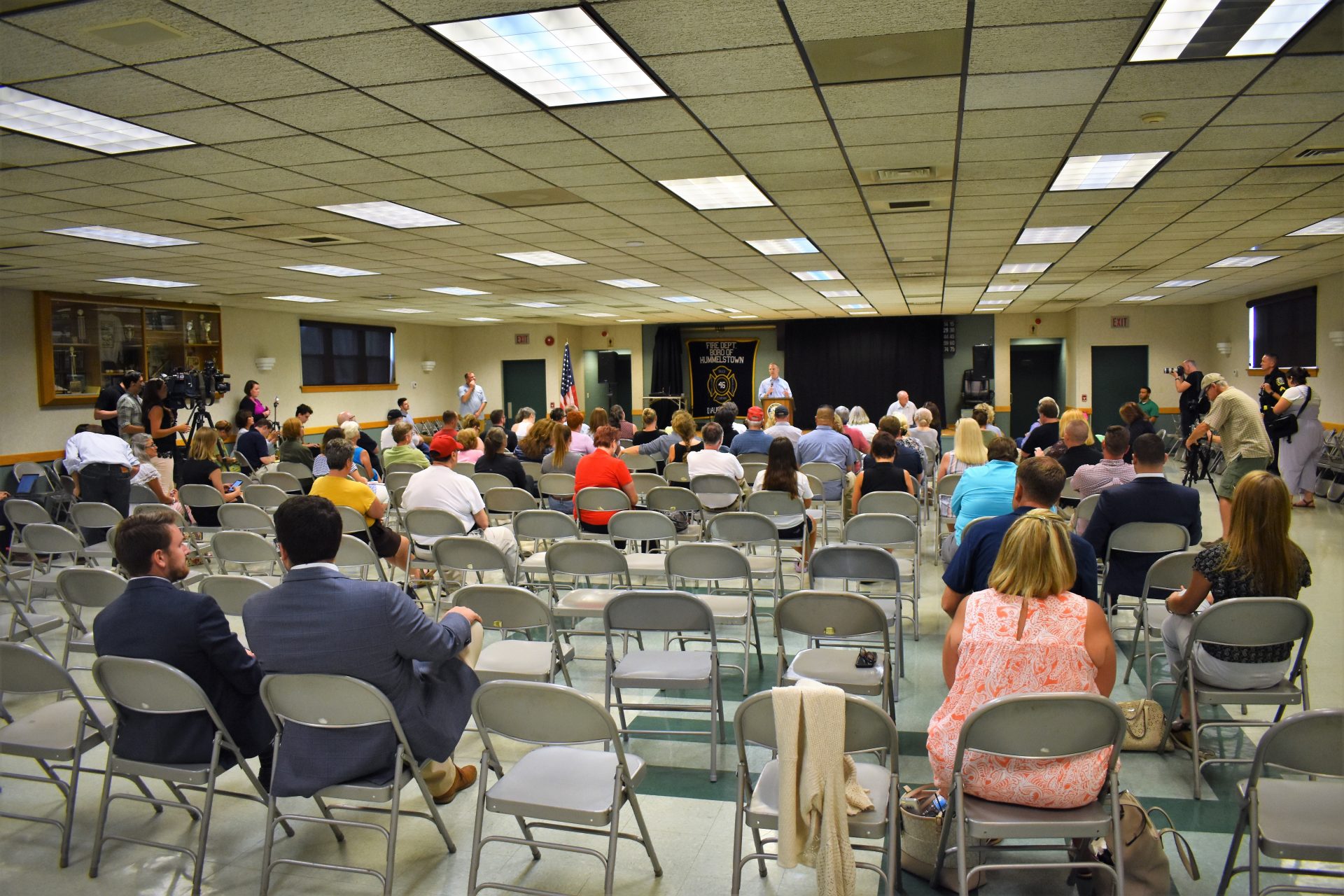 There were a few dozen empty seats shortly after a town hall with Congressman Scott Perry began at the Hummelstown Fire Department on July 30, 2019. 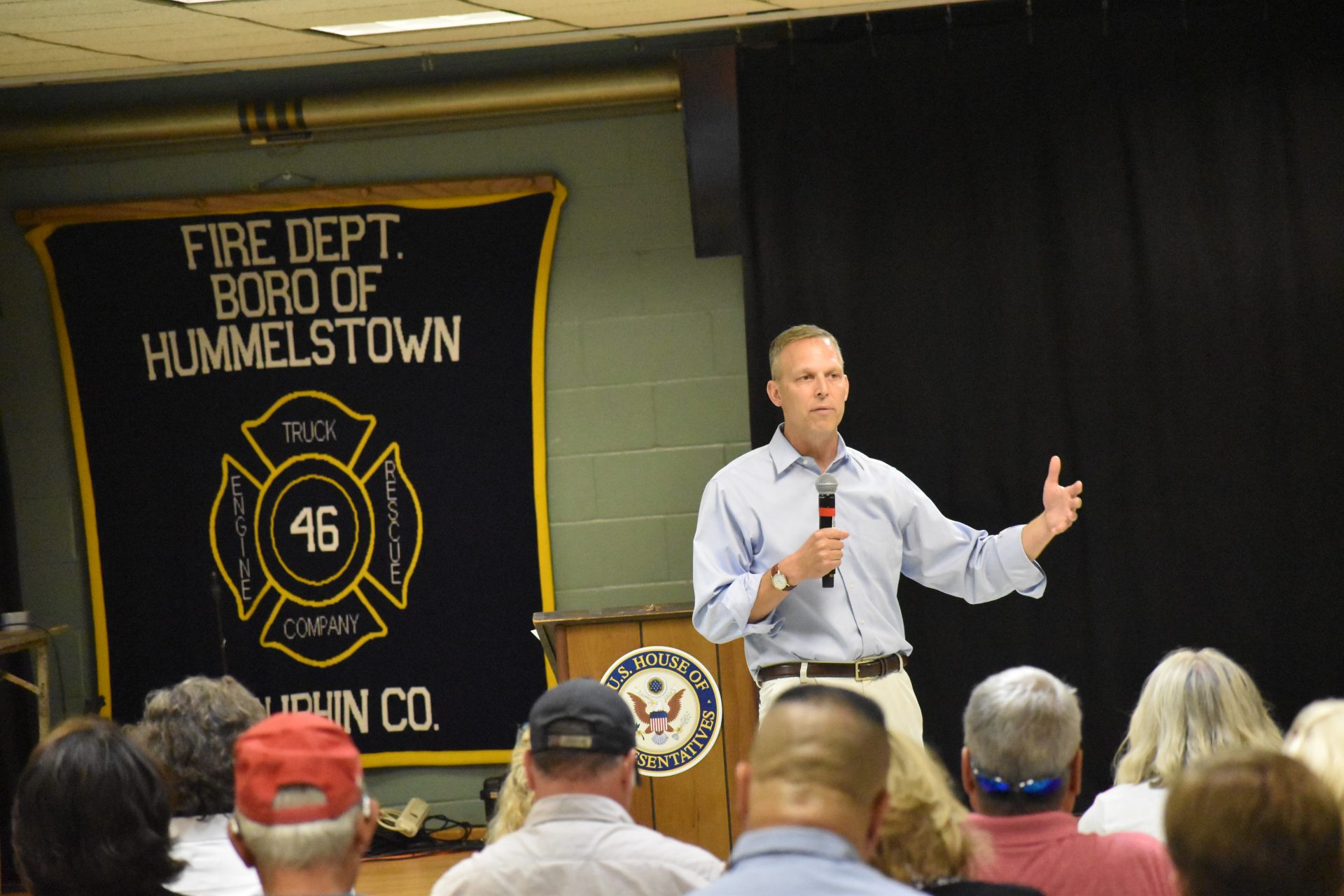 U.S. Rep. Scott Perry speaks to the crowd during a town hall at Hummelstown Fire Department on July 30, 2019. 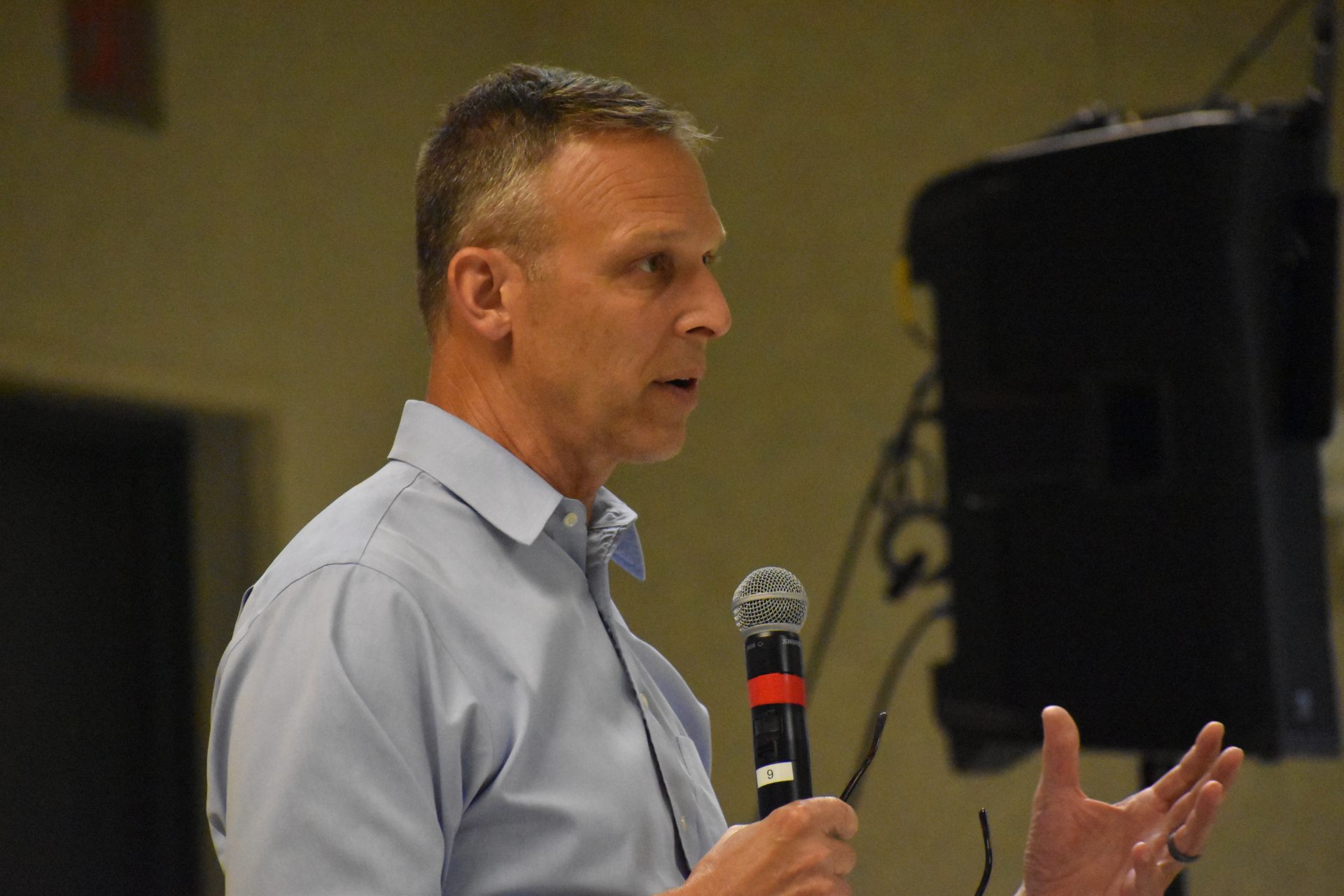 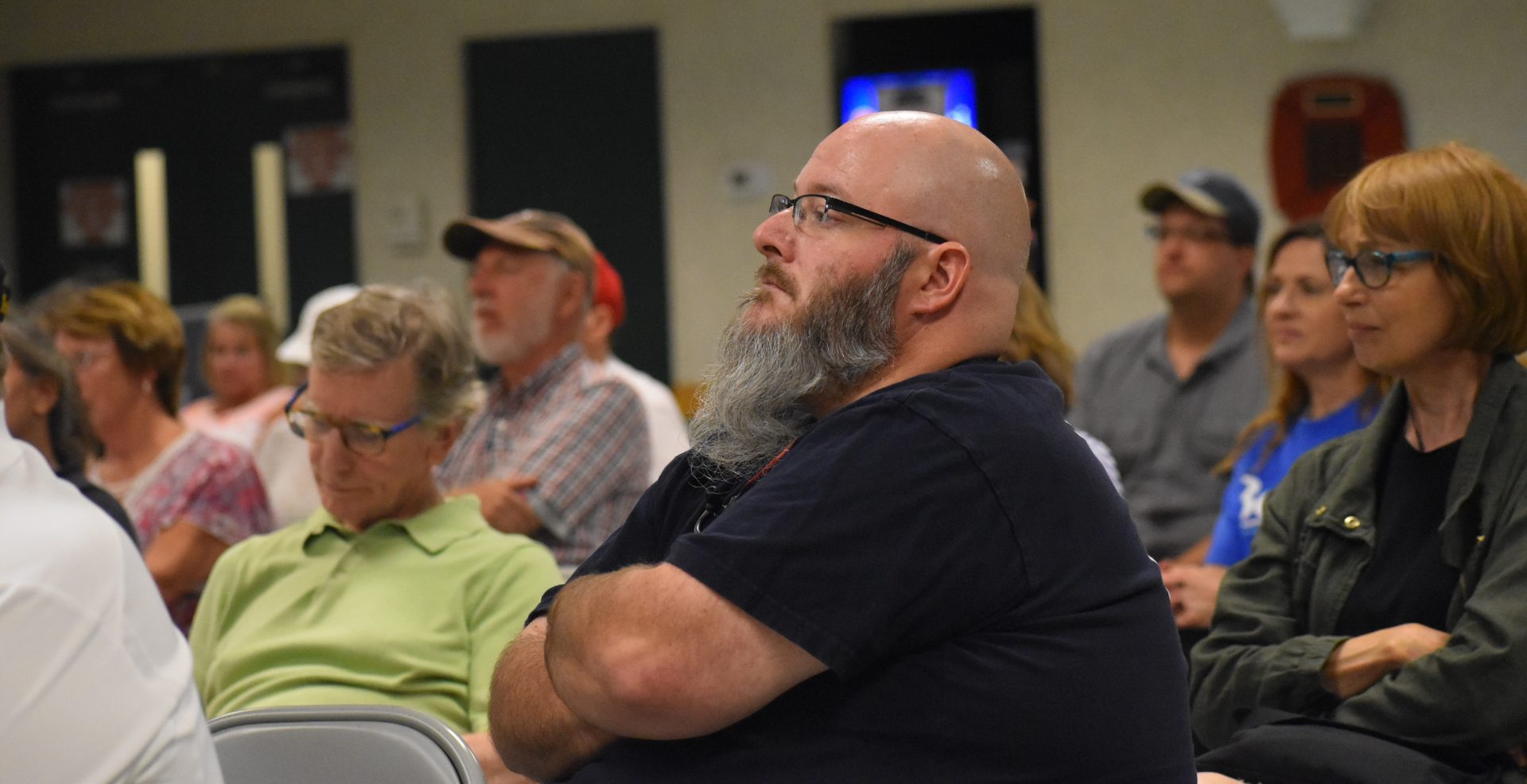 Audience members listen during a town hall with U.S. Rep. Scott Perry at the Hummelstown Fire Department on July 30, 2019. 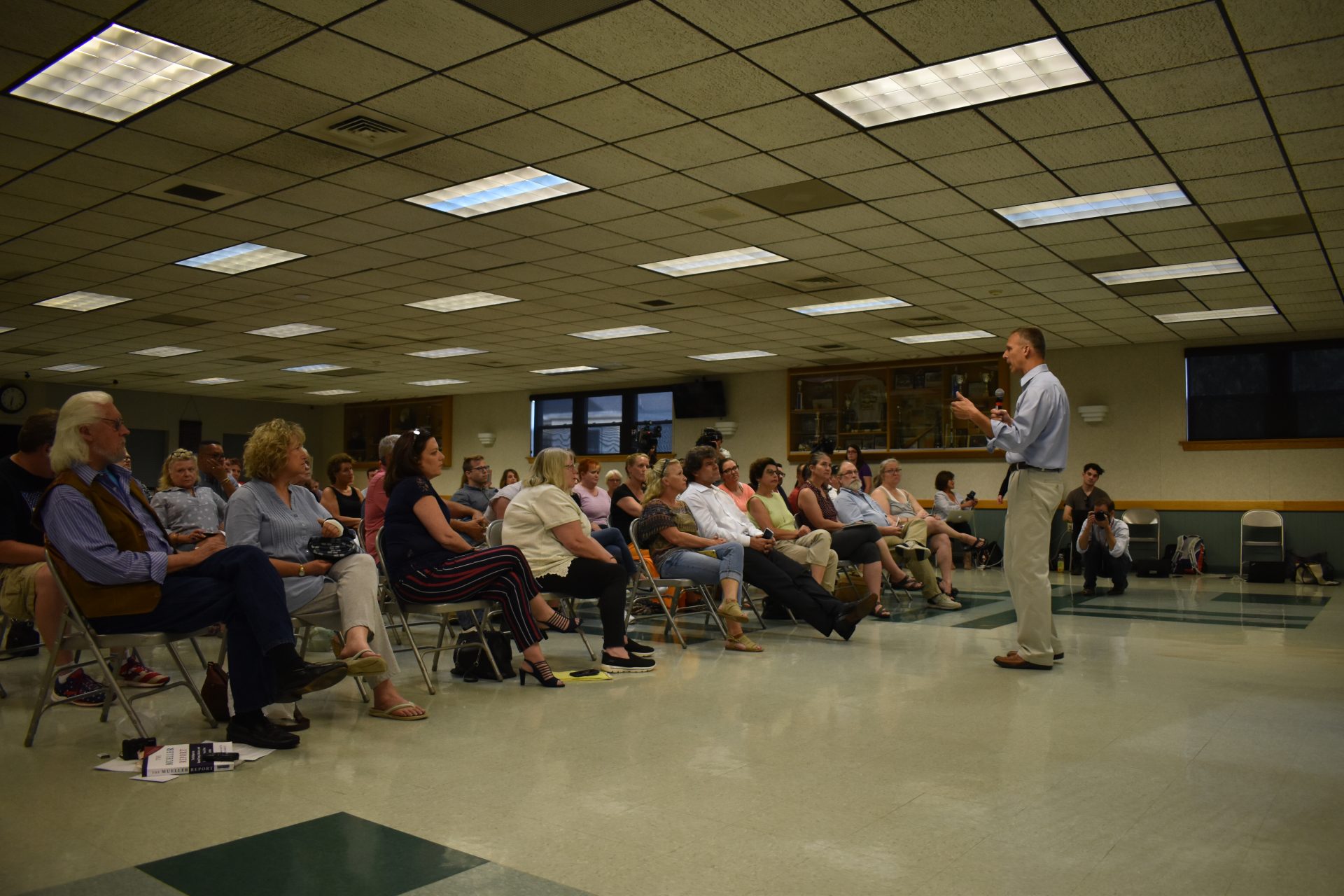 It was a divided crowd. A few times, audience members shouted and accused Perry of lying.

Perry resisted calls to condemn President Donald Trump for racist tweets about minority members of Congress. He said he’s seen things he doesn’t like on both sides of the aisle.

At the town hall, Perry also defended his opposition to raising the federal minimum wage. Asked if he could support a family on the minimum wage, which is currently $7.25 an hour, Perry said he couldn’t. “I doubt anybody can,” he said.

But he said raising the minimum wage would hurt low-skill workers and lead to employers replacing those jobs with machines.

“It doesn’t seem like the business of the federal government to determine what people across the country are going to pay,” Perry said.

Two audience members brought up a murder-suicide in Cumberland County last year. That prompted an emotional and extended back-and-forth.

“She was trying to get away, and he put bullets in her,” said Nathan Shields, who works in marketing for a retirement community.

But he also referred to the Second Amendment and said lawmakers can’t pick and choose which rights to support and defend in the Constitution.

“We live in an imperfect world, and we try and do the best we can under the confines we have,” Perry said, later adding, “We can’t pre-conceive what people might do in the future. We cannot.”

Carolyn Wolf, a 55-year-old Republican who works in a medical office, pointed to Perry’s comments about Second Amendment as one of the things she liked most about his town hall.

“I really liked the way that he said that you have to be careful of restricting constitutional rights,” she said. “Because, it might sound good as an idea, but in practice it would … do more harm than it helps.”

Perry represents the 10th District, which includes all of Dauphin County, plus parts of York and Cumberland counties. He previously represented a more solidly Republican area, but when the Pennsylvania Supreme Court redrew congressional districts last year, Perry found himself in a much more competitive district.

In 2018, Perry defeated Democrat George Scott, a pastor and Army veteran, by less than 3 percentage points.

Shields, one of the voters who mentioned the Cumberland County murder-suicide, is hoping Perry loses in 2020.

“The district is not red. It is increasingly purple and is turning blue,” Shields said.

Eugene DePasquale, a York County Democrat who was twice elected to statewide office as auditor general, has announced plans to challenge Perry in 2020. Attorney Tom Brier is also seeking the Democratic nomination. On the Republican side, Perry faces a challenge from Bobby Jeffries, a logistics director for a health and wellness firm.

Perry is a member of the House Freedom Caucus, a group of conservative lawmakers that has frequently challenged its own party’s leadership. In November 2018, The Hill reported that Perry was one of three Republican lawmakers vying to become the next chairman of the group.

Here are highlights from live coverage of the event:

“You might disagree. But that’s my position on it.”

Inside the town hall. Several empty seats in the back. pic.twitter.com/VsQlJ4uga6