The Republican Party committee in a key Pennsylvania swing county took to Facebook to share an inflammatory meme that labeled four Democratic congresswomen members of “The Jihad Squad.”

The mock-movie poster, which was photoshopped to show one of the lawmakers holding a handgun and grinning, remained on the Northampton County GOP’s Facebook page for about 12 days — until a PA Post reporter reached out to the committee and the state party.

The image depicts the same four congresswomen who were widely seen as targets of President Donald Trump’s July 14 Twitter posts in which he said congressional critics of his policies should “go back and help fix the totally broken and crime infested places from which they came.” Three of the lawmakers were born in the United States. All four are U.S. citizens.

It’s not clear who originally created the “Jihad Squad” image — or who made the decision to post it from the account of the Northampton County GOP on July 17. When a GOP state-level group in Illinois posted the identical meme earlier this month it sparked an outcry, with fellow Republicans and the group’s own president condemning it.

The image appears to be adapted from a poster for the 2013 action movie “Gangster Squad.”

“POLITICAL JIHAD IS THEIR GAME,” a tagline says on the image, which shows a ball of flames at Ocasio-Cortez’s feet. “IF YOU DON’T AGREE WITH THEIR SOCIALIST IDEOLOGY, YOU’RE RACIST.”

Calls and messages to the Northampton County Republican Committee office were not returned on Monday. Shortly before 2:20 p.m, the executive director of the Republican Party of Pennsylvania, Gerry Wosewick, replied to an email from PA Post about the meme and said he would get back in touch with a statement.

By 3:30 p.m., the image had been deleted from the Northampton County GOP Facebook page. It wasn’t clear who took it down. But in a statement, Pennsylvania GOP Chairman Lawrence Tabas said he was “glad the post has been taken down.”

Nancy Dienel, secretary for the Northampton County Republican Committee, said she didn’t know anything about the “Jihad Squad” meme.

“I don’t do any of the posting,” Dienel said.

Before it was deleted, the Northampton County GOP’s post had received 177 shares and 27 comments, almost all supportive, as of Monday morning.

Northampton County, in Pennsylvania’s Lehigh Valley, is a classic political bellwether. It was one of three Pennsylvania counties that Democrat Barack Obama won twice and that Trump flipped in 2016.

The Guardian, a British newspaper, has checked in with voters there multiple times since 2016 as part of an ongoing feature.

In Illinois, the Republican County Chairmen’s Association faced a lot of criticism and received national attention after someone posted the ‘Jihad Squad’ image.

The group deleted the image from its Facebook page. On July 21, the president of the group, Mark Shaw, condemned the “unauthorized posting” and said he apologized “if anyone who saw the image was offended by the contents.”

The chairman of the Cook County GOP, Sean M. Morrison, also condemned the post, saying he was “appalled” by the “use of hateful rhetoric.”

The only difference between the image on the Republican County Chairmen’s Association of Illinois page and the Northampton County GOP page is that the Illinois group added its own logo to the right-hand corner.

In his statement Monday afternoon, the head of Pennsylvania’s GOP didn’t go as far as some of his Illinois peers in condemning the ‘Jihad Squad’ image. He didn’t call it hateful or bigoted.

But Tabas, who was elected chairman of the state GOP this month, said one of his main priorities is fostering a culture of respect — and he pointed to his recent appointment of a compliance officer as an example of that. 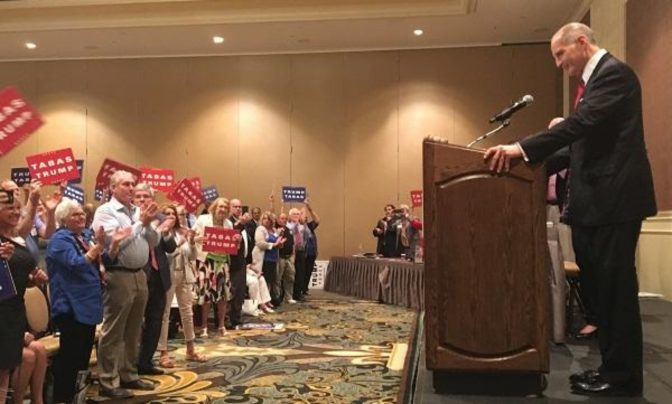 Lawrence Tabas is seen shortly after being confirmed as the Pennsylvania Republican Party’s new chairman in July 2019.

“I tasked her with helping the party enforce and promote legal and ethical policies so that issues are heard, and all can feel welcome, valued and safe,” Tabas said. “While our party opposes the radical socialist policies of these four congresswomen, this image does not convey that opposition in a manner that reflects the values of the Republican Party of Pennsylvania.”

The Northampton County GOP didn’t delete all of its posts about the four Democratic congresswomen. A photo shared on the page shows their headshots with the caption, “DEMOCRATS: WE’RE NEW, BOLD, AND WE HATE YOU!”