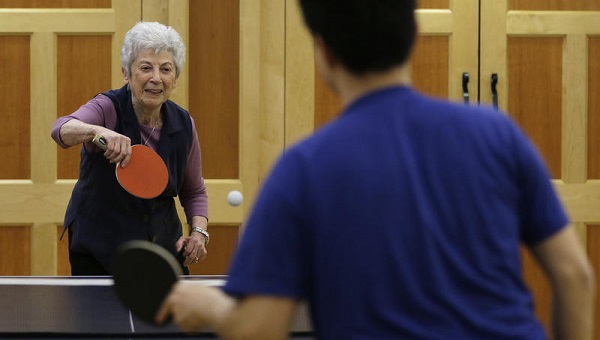 Ilona Engel Travis, left, and Rixiang “Ricky” Huang play ping-pong at Judson Manor, in Cleveland. The arrangement is aimed at reducing the social isolation often experienced by the elderly and bridge the gap between young and old. (Tony Dejak/AP Photo)

Seniors today are happier than previous generations, according to new findings from the University of Pittsburgh.

Researchers surveyed more than 3,000 residents of the Monongahela Valley, from 1987 to present day. Study volunteers were all older than 65.

The more recently born cohorts were less likely to report symptoms of depression.

“Particularly when it comes to their mood, their energy, and their feelings of hopelessness,” said Pitt epidemiologist Kevin Sullivan, the study’s lead author.

This progressively rosier outlook could not be explained by increases in education or the use of anti-depressant medications. Sullivan theorized the findings have to do with quality of life.

“Older adults have actually been living longer, free from disease, and free from disability. And all the morbidity is kind of compressed into their later years in life,” said Sullivan. “So instead of being sick for multiple decades before they die, they’re staying healthy, and then they get sick for a couple years before they die.”

The findings were published in the American Journal of Geriatric Psychiatry.

This story originally appeared on WESA, which receives funding from the University of Pittsburgh.

For special needs adults, a league of their own is coming to Philadelphia