Sen. Doug Mastriano, R-Franklin County, standing in his Capitol office, displays the signature Stetson hat awarded to him for his service in the 2nd Armored Cavalry Regiment.

This spur-wearing senator is hoping to prod Pa. forward through lawmaking that makes a difference

'My focus while I’m here will be veterans and reducing the burdens on the working class people.'

Sen. Doug Mastriano is the first spur-wearing senator to walk on to the chamber’s floor in the 21st century and likely the only one who has done so for decades before.

But don’t ask him about his horses, the retired U.S. Army colonel admits he’s a poor rider and doesn’t own horses.

The silver spurs he wears are ones he’s earned. He was awarded them on his first assignment in the Army serving with the 2nd Armored Cavalry Regiment in West Germany, patrolling its border with Czechoslovakia along the Iron Curtain. 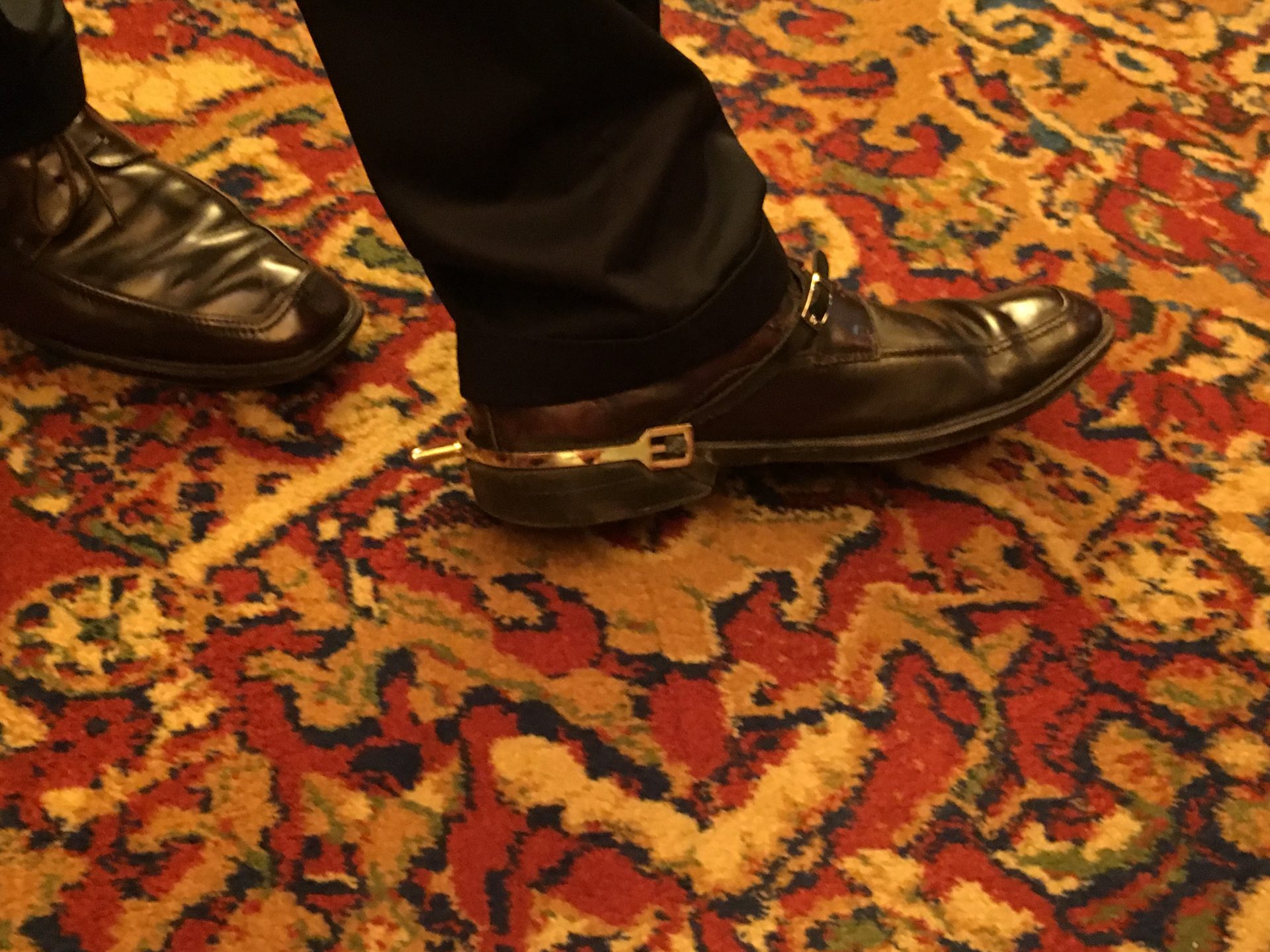 Sen. Doug Mastriano, R-Franklin County, earned his gold spurs in the U.S. Army for serving in combat with the 2nd Armored Cavalry Regiment.

He has a gold pair, too. He earned those going into combat with the Cavalry when he was deployed to Saudi Arabia to liberate Kuwait in 1991.

“That’s why you’ll see me with silver and gold spurs from time to time,” Mastriano told PennLive. “It’s in honor of my first service.”

Along with the spurs that have gotten some notice around the state Capitol, he occasionally may be seen wearing a signature Stetson hat that is part of an over 150-year-old tradition for military officers assigned to the cavalry.

“It helps remind us of the past, the rich history that the Cavalry has,” he said, donning the Stetson that bears the pin of crossed cavalry swords with the number 2 above them for his regiment.

Mastriano, 55, has quite a storied past from his years in the military including witnessing the fall of the Iron Curtain, seeing flecks of freedom in East Germans’ eyes as they crossed into the West for the first time, and doing three tours in Afghanistan. But now his sights are set on what the future holds for Pennsylvania and his role in helping to shape it, spurs and all.

He was elected in May to the state Senate to represent Franklin and Adams counties in a special election to fill the vacancy created by the February resignation of former Sen. Rich Alloway. He handily defeated Democratic candidate Sarah Hammond by claiming 68 percent of the votes.

Being a politician was not a life’s goal for him nor is it the best job he says he has ever had. Being a colonel in the U.S. Army for 30 years and fighting wars overseas is hard to top. But he is a public servant through and through with a steely determination to make a difference.

He sat down with PennLive on Monday and shared some thoughts about being southcentral Pennsylvania’s newest senator. He has been on the job since June 10.

He has not yet introduced his first piece of legislation but he has some ideas of topics he wants his first few bills to address: veterans, reducing government waste, and property taxes.

“My focus while I’m here will be veterans and reducing the burdens on the working class people,” said the son of a career Navy man who worked odd jobs to make ends meet.

His first run for public office was last year when he sought the GOP nomination in the U.S. House vacated by former GOP Congressman Bill Shuster. He lost that eight-person race to Dr. John Joyce, finishing in the middle of the pack.

After that, he began pursuing a job opportunity to develop a strategy with NATO allies in dealing with Russian aggression in Eastern and Northern Europe. “It looked like I was on the path to get that,” he said.

Then Alloway called him to ask him to consider running for the Senate seat. He said he arrived at his decision after talking with his wife Rebecca, praying, and deciding where he could have the most impact.

Serving in the office is living up to his expectations, he said.

“It’s definitely a place where we’re making a difference,” he said. “I was pleasantly surprised by the amount of legislation that was passed the past three weeks and a lot of it was very good,” Mastriano said.

While the $34 billion budget spent more than he would have liked, he said on the whole, “it’s a good budget, no tax increases and little, if any, regulation increases and burdens on people.”

The outburst that happened in the Senate last week during a debate of a bill to end a cash assistance program was appalling and disgusting to him in several ways, including the way it was covered by some media outlets who he felt misrepresented what he witnessed that day, he said.

He said he was glad when President Pro Tempore Joe Scarnati, R-Jefferson County, restored order after Lt. Gov. John Fetterman walked away from where the presiding officer stands on the rostrum during the ruckus to try to sort things out.

“I felt like we had an adult in the room again who was going to abide by the rules,” he said. “There’s rules. There’s a copy in all of our desks in the Senate. I had it handy. I was pulling it out to see what was going on here. Obviously all this is brand new to me. But the rules exist and both parties agreed on them apparently in January.”

“Obviously, all of this is brand new to me,” he said.

His military background includes serving as director of NATO’s Joint Intelligence Center in Afghanistan, leading 80 people from 18 nations. He admits he had to stretch to build a team to support their military mission.

“It was a lot of give and take, a lot of compromise,” he said. “Sounds like it’s very fitting for this job here.”

Mastriano is looking to build relationships with senators on the other side of the aisle, starting this summer. He is hoping to have some cookouts with some of them “so people can get to know and see who I am and I can know and see them. Then it’s really hard to demonize one another when you come to a different” position on issues, he said.

Freshman lawmakers come in full of energy and fresh ideas only to tend to be worn down once they face the reality of being one in a 50- or 203-member chamber. But Mastriano says don’t expect that from him.

“It’s not going to be like that. I didn’t need to be here. This is not the best job I’ve ever had,” he said. “It’s because I really want to make a difference. I really believe in serving the people. That’s why I turned down the pension. … It’s symbolic of my commitment to the people and not to enrich myself.”

Pa. Auditor General Eugene DePasquale is running for Congress, and here’s why