Lieutenant Governor John Fetterman, a Democrat, has presided over the state Senate since January.

Republicans: If Fetterman breaks rules again, we can remove him from presiding over the Senate

After a blowout on the Senate floor, GOP members say the lieutenant governor has 'scarred' the chamber 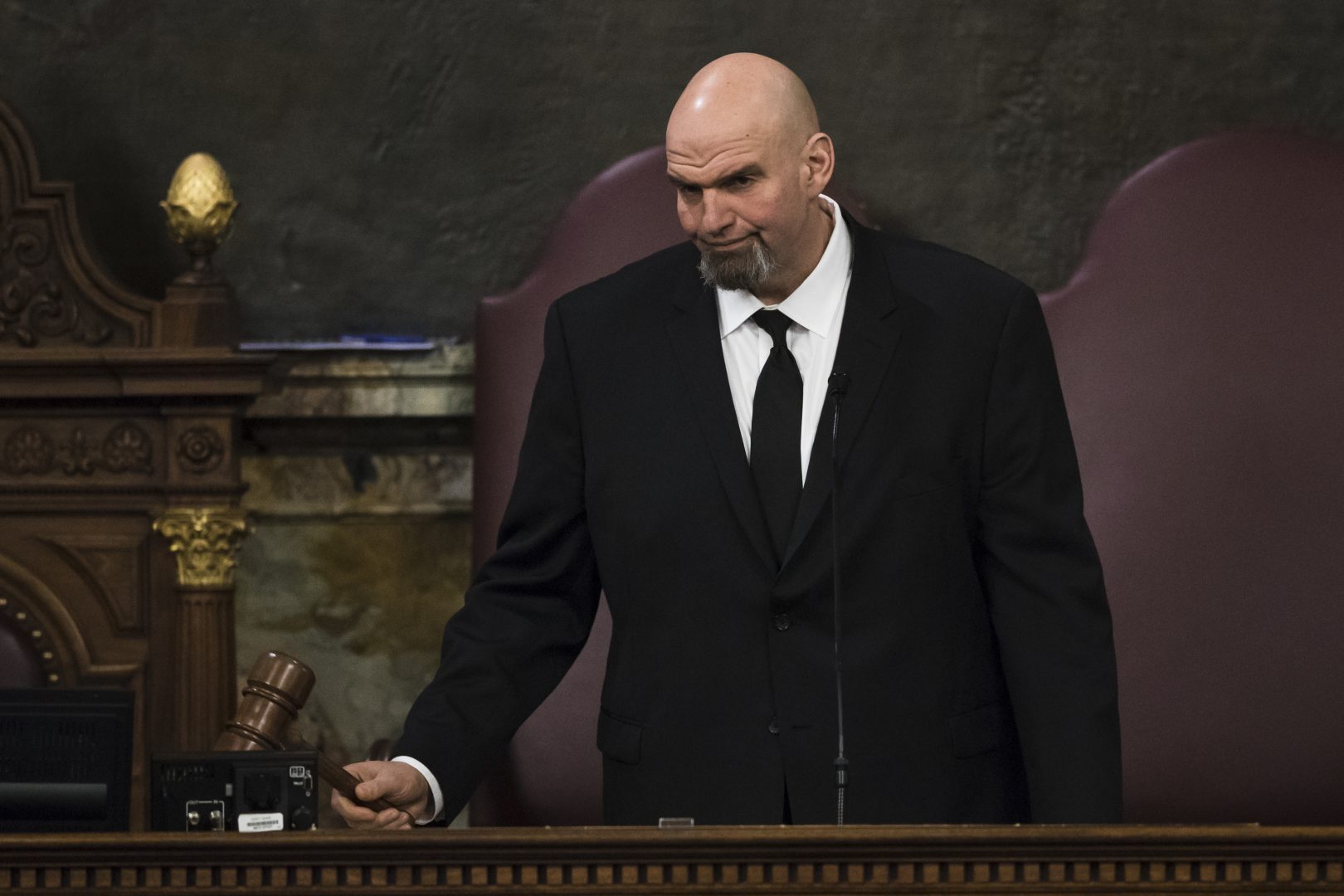 Lieutenant Governor John Fetterman, a Democrat, has presided over the state Senate since January.

(Harrisburg) – Days after an intense shouting match on the state Senate floor, Democrats are eager to put the incident behind them—with Governor Tom Wolf saying he thinks “it’s time for us all just to move on.”

But the GOP majority says the episode left lasting scars.

Republicans sent a letter to Democratic Lieutenant Governor John Fetterman Tuesday saying if he violates the chamber’s rules again, they plan to try to remove him from presiding. It was signed by every GOP member of the Senate.

Republicans attempted to vote to ignore the minority party’s amendments on a bill to repeal a cash assistance program for the poor. But Democrats, incensed, tried to keep control of the floor.

The episode ended with Fetterman allowing Democratic Senator Katie Muth to speak, in violation of chamber procedure, as Senate Majority Leader Jake Corman yelled for the vote to proceed.

It didn’t take long for the shouting match to go viral online.

State @SenatorMuth refused to stop reading a letter from a man who experienced homelessness even though her male colleague tried to shout her down for minutes on end pic.twitter.com/HC2fg3WDPP

Fetterman has since confirmed on Twitter, he broke the rules knowingly.

Uh hey, expert guy, I gave her the floor * against senate rules* to read her letter. *That’s* what started this whole scene. 💡

“I’ve never seen blatant defiance of the rules by the presiding officer. Not even close,” he said. “It is a new frontier.”

So, what might happen if Republicans feel Fetterman has broken the rules again?

Crompton acknowledged, the question brings them into “uncharted territory” and is “a little out-there.” But he points to Section 576 of Mason’s Manual, the legislative guidebook that most states, including Pennsylvania, use as a procedural default if their own rulebook doesn’t address a particular circumstance.

The manual says whenever “the presiding officer attempts to thwart the purpose of his office, the power resides in the assembly to pass him by and proceed to action otherwise.”

It doesn’t give the Senators many specifics on how they might proceed if they do, in fact, decide Fetterman is thwarting the purpose of his office—or how that finding might be made, or by whom.

Crompton said most likely, the GOP majority would put the issue to a vote and, if it were to pass, they would remove the lieutenant governor from presiding over the Senate for a set period of time—either a day or so, or for the duration of debate on a particular bill.

But, Crompton added, at this point the action remains theoretical.

“I hope we won’t confront this again,” he said. “I don’t think we will, actually. But if we do, we will recess, or we will pause, and we will re-insert someone who follows the rules.”

Since video of the incident began spreading, Republicans have been contending with allegations of sexism from viewers dismayed at the image of Corman yelling over Muth.

In its letter to Fetterman, the caucus stressed that Corman’s gripe was solely with Fetterman.

“No less than 30 times Senator Corman stated ‘Mr. President,’ which you ignored,” Republicans wrote. “We were rightfully outraged that you willfully ignored the Senate rules and our points of order and objections.”

They accused Fetterman of mistreating Parliamentarian Megan Martin—whose job it is to guide proceedings—by ignoring her counsel. The letter noted, Martin is the first unanimously elected female parliamentarian in Senate history.

Crompton also said Senate Republicans—particularly Corman—have been inundated with hate mail and threats since the video went viral, and are working with police.

In its letter, the caucus made it clear they believe Fetterman and other Democrats played the incident up to demonize them.

“You pushed a false narrative,” they wrote.

Asked if Republicans would change anything about their conduct in the Senate floor incident, Crompton said members were operating “in the moment” and “without precedent,” and acknowledged that emotions were running high.

“We will approach defiance in a different way if it occurs again,” he said. “You always want to do something different if you get a redo.”

Fetterman didn’t respond to requests for comment, apart from echoing Wolf’s call for bipartisanship in a tweet.

“I’m looking forward to rejoining my colleagues—from both sides of the aisle—when the Senate reconvenes in September to collectively work together for the people of this great commonwealth,” he wrote.

The Governor is right. It’s time to move past the events of last week. I’m looking forward to rejoining my colleagues-from both sides of the aisle- when the senate reconvenes in September to collectively work together for the people of this great commonwealth. https://t.co/hE1sxYYjt9

“I’m not going to sit here and make threats,” he said. “But this isn’t once and done…this was willful and blatant in our view, and it’s not going to be easily forgotten. And yes, the relationships right now are strained.”

The program at the center of this prolonged debate is General Assistance.

Republicans first repealed it in 2012, but last year the state Supreme Court found the original legislation unconstitutional based on a procedural issue, and overturned it.

Since Governor Wolf reinstated the program last year, it has given roughly 11,000 people who don’t qualify for other assistance about $200 per month. The administration estimates it would cost about $24.5 million to continue offering it for another year.

After the shouting died down, the GOP majority—minus two members—successfully voted to repeal it.

The program is slated to end August 1.

This spur-wearing senator is hoping to prod Pa. forward through lawmaking that makes a difference