Gov. Tom Wolf sits on the steps of the Capitol rotunda on June 28, 2019, ahead of a news conference to celebrate increased funding for education.

Seven big takeaways for education in the new Pa. budget

There's more money for schools -- but not specifically for teacher salaries.

As Pennsylvania lawmakers finalized this year’s budget, a flurry of hotly-debated education proposals have been decided.

Below are the latest updates on seven major education issues — from funding to charters, school security to teacher evaluations — that made headlines in Harrisburg over the last few months.

No bump for the lowest-paid teachers

In Gov. Tom Wolf’s budget address, he called for a salary increase for the lowest-paid public school teachers in the state, saying they “have too often been getting the short end of the stick.”

Across the state, 180 out of 500 Pennsylvania school districts would have received money.

The Wolf administration estimated the change would affect about 3,200 teachers, school nurses, counselors and other professional staff members — many in rural parts of the state. It did not include charter school teachers. The cost was estimated at nearly $14 million — a relatively small amount in the state’s education budget.

But Republican leaders and the Pennsylvania School Boards Association warned that bumping up the minimum salary could lead to a ripple effect and higher salaries for all teachers, which would be funded by local taxpayers. 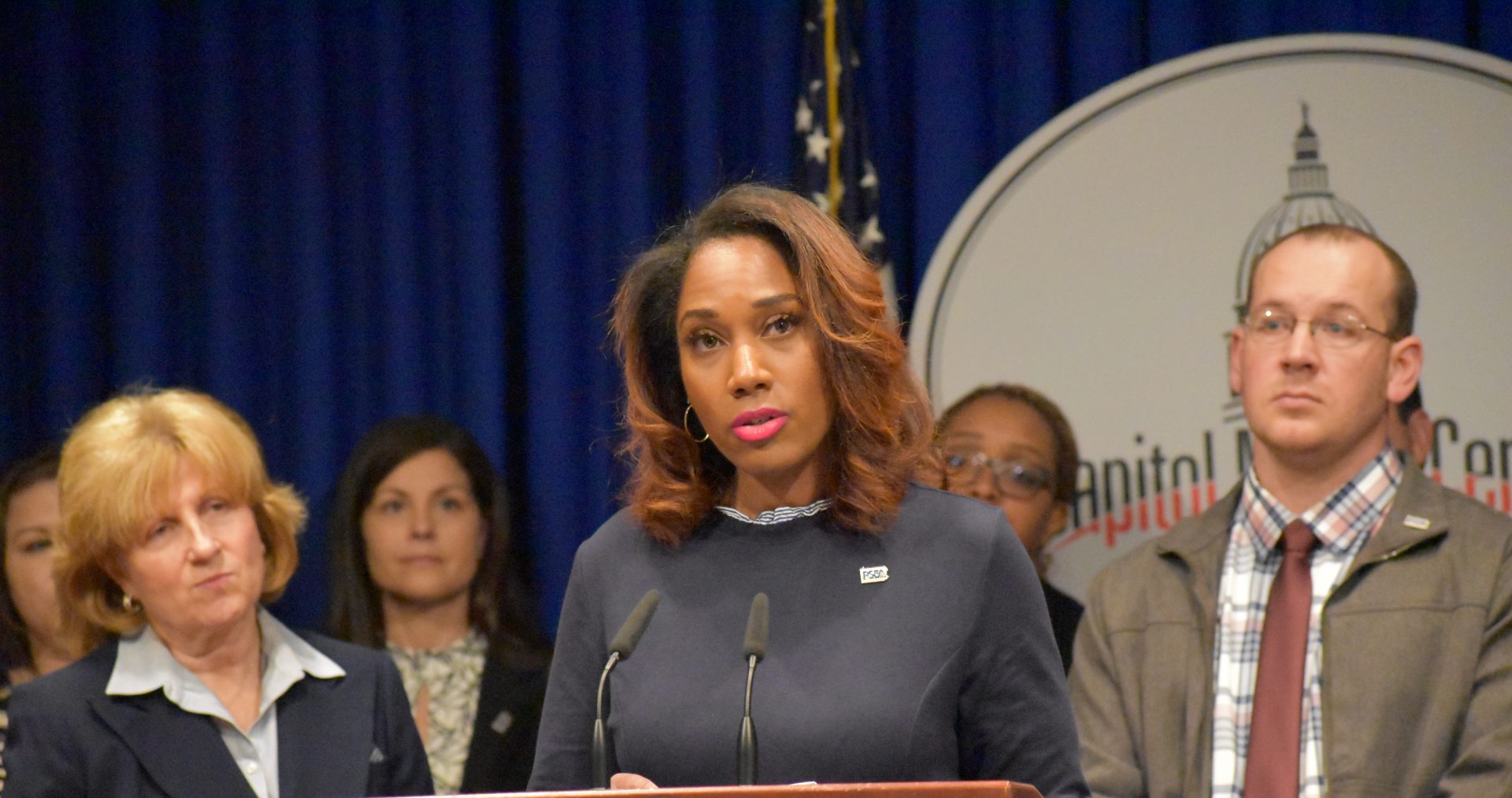 Bridgette May, a certified school nurse in the Erie City School District, speaks during a news conference at the state Capitol on March 26, 2019. “Becoming a school nurse was like a dream come true for my family and I,” she said. “However, the salary made it more like a nightmare when it came to making ends meet and supporting my family.”

And some lawmakers expressed concern about how the salary money wouldn’t follow the state’s new student-weighted formula. Still, the proposal did receive some bipartisan support. And the Pennsylvania State Education Association, the state’s largest teachers union, plans to advocate for the proposal in the fall.

“We are disappointed, but we are not defeated,” said PSEA spokesman Chris Lilienthal, adding that the salary push is relatively new in Pennsylvania. “Sometimes it takes a little bit longer for really big ideas to get across the finish line.”

During a new conference on Friday afternoon in the Capitol rotunda, Wolf echoed that idea.

Status: Not part of the budget package; could return in the fall.

Pennsylvania will raise the number of years that students are required to spend in schools.

Currently, the compulsory school age in Pennsylvania is 8 to 17 — so nine years total.

Most states require more time in school, according to a 2017 report from the Education Commission of the States. Some states, though, allow exemptions with parental permission. In Pennsylvania, exemptions include farm work.

Wolf proposed changing the compulsory age to 6 to 18, and although the issue helped derail passage of the budget on Thursday, lawmakers approved the idea Friday morning.

Status: Passed the General Assembly as part of the budget package. Wolf signed it.

Republican leaders advocated strongly for a bill that would have nearly doubled the size of a tax-credit program that helps parents afford private school tuition.

Governor Tom Wolf vetoed the legislation, but will okay a compromise that permits the program to grow modestly and makes other changes.

At issue are two tax-break initiatives: the Educational Improvement Tax Credit (EITC) and the Opportunity Scholarship Tax Credit (OSTC). The programs incentivize businesses and individuals to donate money for private school scholarships. In return the donors get a break on their state taxes — up to 90 percent of their donation.

State law caps the number of tax credits available, but that number has risen significantly since the program began in 2001.

With this most recent update, Pennsylvania will raise the limit on EITC tax breaks from $160 million to $185 million. The OSTC cap will jump from $50 million to $55 million, with all of that new money specifically steered toward those private schools that serve a large share of “economically disadvantaged” students.

Lawmakers also raised the eligibility limits, meaning more Pennsylvania families will be able to receive scholarships through the tax-credit programs.

“These increases will allow thousands more scholarships to be awarded next year,” said Nathan Benefield of the Commonwealth Foundation, a libertarian think tank, in a statement.

The Commonwealth Foundation said the $25 million EITC increase is tied for the largest one-year jump in the program’s 18-year history.

On Friday, Wolf said the $100 million included in the bill he vetoed was “excessive.”

“These are expenditures. They have a fiscal impact on the commonwealth. We have to be careful,” Wolf said. “I was willing to go along with $25 [million].”

Status: Wolf signed two new school code bills, one of which contains the changes to EITC and OSTC.

As always, money was at the heart of this session’s education discussion.

Governor Tom Wolf asked for increases in several major education spending categories, and got most of what he requested.

The basic education budget will go up by $160 million, a bit shy of Wolf’s ask. On the special education front, Wolf’s $50 million request was delivered. Meanwhile, another $25 million will go to Pre-K programs.

Wolf has stumped for greater education spending since his first run for governor, and he has continued to secure increases.  But the boosts haven’t kept pace with the rise in mandated costs that districts continue to face for special education, healthcare, and charter schools.

“At best, this budget keeps many schools from falling further behind, but will likely necessitate local tax increases and does not make adequate progress toward providing districts the funds necessary to provide excellent education to all students,” said PA Schools Work, an advocacy group, in a statement.

A coalition of Southeastern Pennsylvania lawmakers, activists, and union officials fell short in their attempts to create a special fund for emergency school repairs. Most of the money would have gone to fix dilapidated schools in Philadelphia.

Security and a call for a veto

Senate Bill 621 passed this week — and, on Friday, an anti-gun violence advocacy group was urging Wolf to veto it.

CeaseFirePA, which supports increased gun restrictions, is urging Wolf to veto the bill. In an email, the group said the bill will “arm more school personnel” and “open the door to arming teachers.” The Education Law Center, which advocates for vulnerable student populations, also opposes the bill.

Mike Straub, a spokesman for the House GOP Caucus, disputed that it would open the door to arming teachers.

“The bill’s language specifically focuses on school resource officers, the word teacher is not found anywhere in the bill,” he said in an email.

House Democrats oppose arming teachers, said caucus spokesman Bill Patton, and he said they “don’t see that in this bill.”

Regan’s chief of staff, Bruce McLanahan, said his office doesn’t think the bill opens the door to arming teachers and that was never the intention of the bill.

Gov. Wolf opposes arming teachers, and he said he wouldn’t accept a bill that does that.

“I’ve tried to get this bill in a shape that it doesn’t do that,” Wolf said.

As for the concerns from CeaseFirePA and the Education Law Center about a broader expansion of which security personnel can carry guns, Wolf said he’s trying to strike the right balance for school safety.

Status: The legislation, Senate Bill 621, passed the General Assembly. On Tuesday, Wolf’s office announced that he signed it. In a signing statement, Wolf said the legislation “clearly and plainly establishes” that teachers cannot be designated as “security personnel” and thus cannot be armed. He said it removes ambiguity in the law.

“The students, parents, and educators in this Commonwealth can now be secure in the knowledge that teachers can dedicate themselves to teaching our children, and that the security of school facilities rests in the hands of trained, professional security personnel,” Wolf said.

House Republicans passed a pair of bills that drew the ire of teachers’ unions and other charter opponents. Neither bill will become law this session.

Several school districts said the standardized application would curtail their ability to police charter schools and close poor performers. They also thought it would give charters the ability to expand at their discretion, which some charter skeptics saw as a threat to school district budgets.

The second bill would have given charters first dibs to buy or lease unused school district facilities.

Both bills failed, along with a pair of other charter proposals that had bipartisan support.

“Unfortunately, partisan politics took precedence once again over the best interests of Pennsylvania’s students and the four charter reform bills,” said Ana Meyers, Executive Director of the Pennsylvania Coalition of Public Charter Schools, in a statement.

Charter critics, like the Philadelphia teachers’ union, applauded the demise of the two controversial charter bills.

“The Philadelphia Federation of Teachers is pleased that the General Assembly’s school code legislation was free of catastrophic charter expansion language,” the PFT wrote in a press release.

Status: Stuck in 20 years of limbo

State Sen. Ryan Aument, R-Lancaster, is trying to change a law that he sponsored in 2012.

On Monday, Aument’s legislation to change Pennsylvania’s teacher evaluation system passed the Senate with a 38-11 vote.

He said the new plan would give greater flexibility to administrators, by increasing the observation portion of the score, and better recognizing the effect poverty has on student performance.

Status: Passed the Senate. It is not part of the budget package, but discussions are expected to continue in the fall. 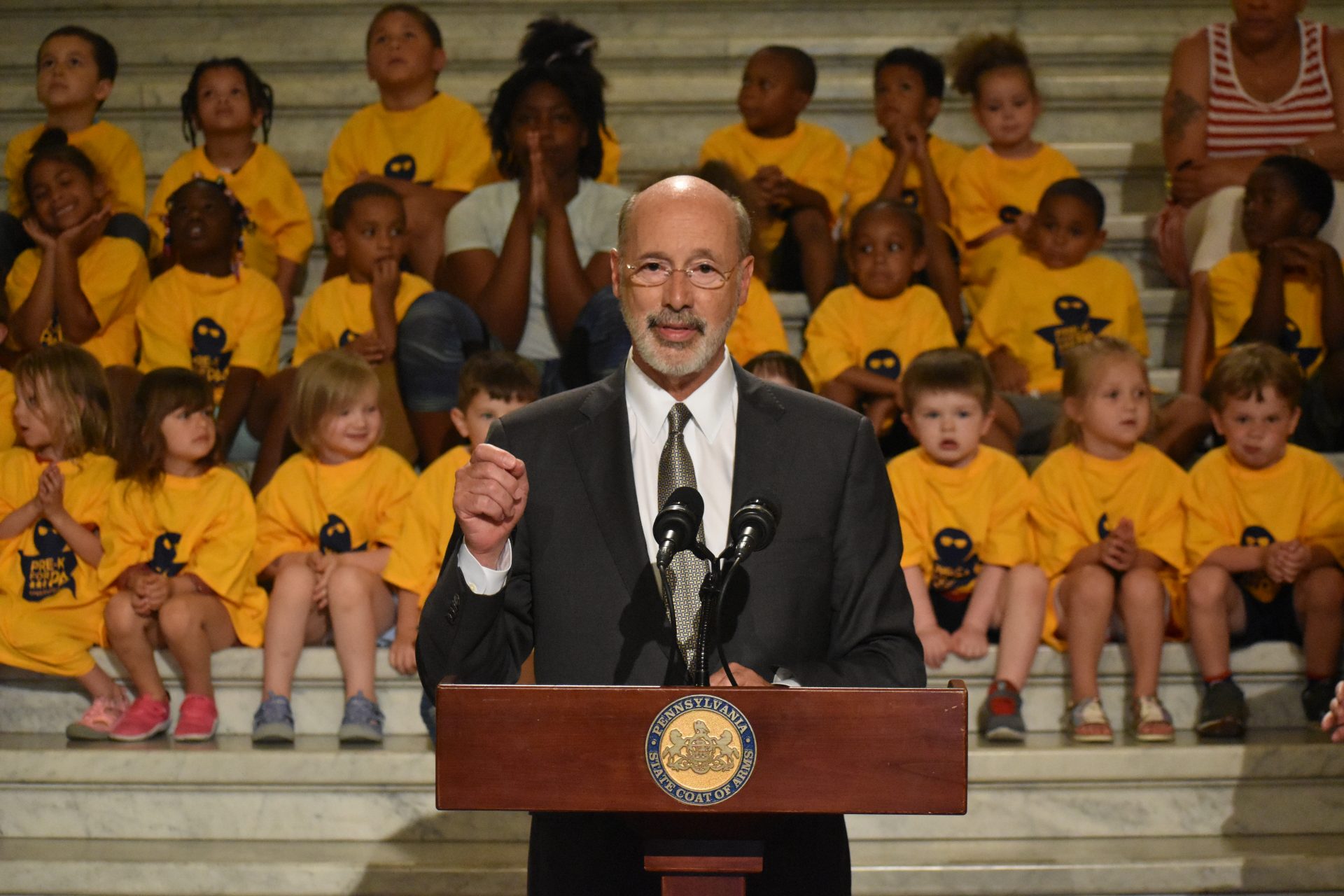 Democratic Gov. Tom Wolf speaks at a news conference on June 28, 2019, in the state Capitol, with preschool children sitting behind him.