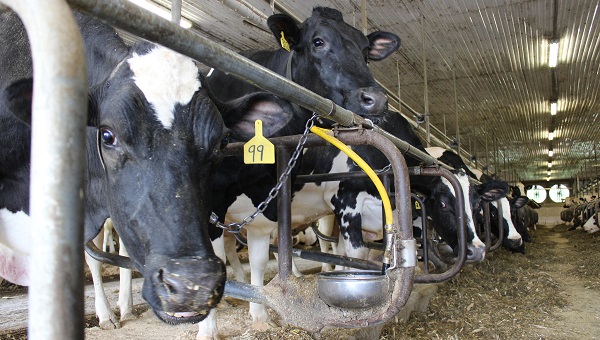 Nearly a decade ago, animal rights activists targeted a Northumberland County dairy farm over its treatment of livestock. The effort fell flat. Now they’re back, launching a new round of allegations against the same family-run operation that milks hundreds of cows.

A PETA operative gained employment at Reitz Dairy Farm near Shamokin in central Pennsylvania this spring and spent two months surreptitiously shooting video that activists once again say shows severe maltreatment of the herd. The undercover probe sets up another potential legal tussle between People for the Ethical Treatment of Animals and family farmers who say they properly care for their cattle.

PETA officials presented their evidence to state police last week. Police have opened an investigation, visiting the farm on Tuesday and requiring the owners to work with their veterinarian, said Cpl. Michael Spada, the Animal Cruelty Officer with the Pennsylvania State Police. The investigation remains open.

“Every day is pain and suffering for many of the animals at this farm,” said Dan Paden, PETA’s vice president of evidence analysis. “These animals are denied needed care for obvious injuries and severe lameness and they are kept in incredibly filthy conditions.”

Reitz’s owner, Lloyd Reitz Sr., said he had no comment on the allegations when reached by phone on Thursday.

In 2010, Reitz and his son, Andy Reitz, were tried on summary animal cruelty charges after a similar undercover investigation. The judge cleared them, saying the video evidence was inconclusive and that he was persuaded by the testimony of the farm’s longtime veterinarian, who said he never saw evidence of cruelty or negligence.

“There was no wanton intent to hurt any animals,” the farmers’ attorney, Roger Wiest II, argued then. He denounced PETA as an extremist group that had committed “domestic terrorism” by spying on the farm.

“Farming is a hard, dirty business,” Wiest added, according to The News-Item in Shamokin. “I believe you’ve made a mountain out of a molehill with this case.”

PETA officials insist they had the goods — then and now.

The latest video, which PETA released publicly, purports to depict cows and calves wallowing in their own manure and urine in filthy barns with no bedding; cows with grotesquely swollen hind leg joints, or hocks, some of which had ruptured and were discharging blood and pus; animals with lameness; and a worker who uses a cane to repeatedly hit a cow that had become trapped in a stall, striking her on her sensitive udder.

The video was shot between April and June by a PETA field observer who got a full-time job at Reitz after PETA received a tip from one of the farm’s regular employees. In an affidavit, the field observer recounted incidents of alleged abuse or neglect involving 28 cows and about 120 calves and said that farm managers refused to provide veterinary care for injured cattle.

Dr. Holly Cheever, a veterinarian who testified at the Reitzes’ first trial and reviewed the new video for PETA, said that “severe hock injuries seem extremely common” on the farm and require treatment with antibiotics.

“This is a woefully common form of neglect on dairy farms since once a cow is put on antibiotics and anti-inflammatory medications to ease the pain, the milk cannot be shipped for human consumption during treatment and for a ‘withdrawal’ period of several days thereafter,” she wrote in an analysis. “Thus, the economics dictate a complete lack of treatment.”

Temple Grandin, an animal science professor at Colorado State University and consultant on livestock treatment, agreed the video showed severe swelling of the leg joints, and said it typically happens because of poor stall design and a lack of bedding.

“Those are the worst hocks I have ever seen,” she said in an interview. “It’s a preventable problem and the emphasis needs to be on prevention. It is really painful for the cow.”

PETA said it returned to the farm after getting four whistleblower complaints from Reitz employees since 2014.

An animal rights group is leveling a new round of allegations against central Pennsylvania dairy farmers who were acquitted of animal cruelty charges nearly a decade ago.

A PETA operative gained employment at Reitz Dairy Farm in Shamokin, Northumberland County and surreptitiously shot video that activists once again say shows severe maltreatment of the herd. The undercover probe sets up another potential legal tussle between People for the Ethical Treatment of Animals and family farmers who say they properly care for their livestock.

PETA officials presented their evidence to state police. Police have opened an investigation.

PETA was involved in an earlier case against Reitz’s owner, Lloyd Reitz Sr., and his son. They were tried on summary cruelty charges nearly a decade ago and acquitted.

Reitz said he had no comment on the new allegations.