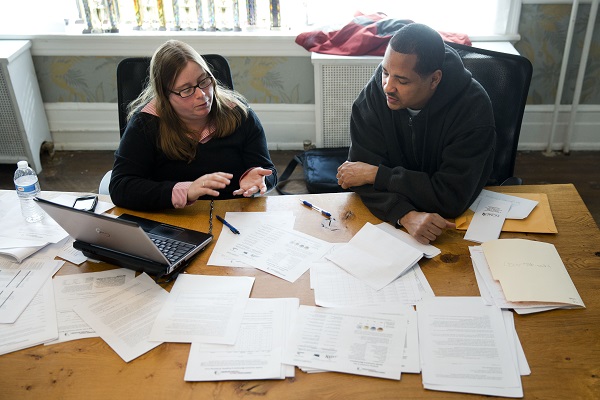 FILE PHOTO: Erik Furness meets with Antoinette Kraus with the Pennsylvania Health Access Network to begin the process of signing up for insurance under the Affordable Care Act. (AP Photo/Matt Rourke)

(Pittsburgh) — Usually a monopoly results in bigger bills for consumers, since a lack of competition allows a business to demand high prices. But a new analysis from the University of Pittsburgh finds that’s not always the case for the Affordable Care Act marketplace.

Low-income people who buy individual coverage generally pay less in parts of the U.S. where insurance exchanges have just one vendor.

That’s because the federal government foots at least part of the insurance bill with subsidies to low-income individuals. The subsidy amounts are based on premium rates, which are determined by insurance companies.

“That means that if you [as an insurance company] can set a really big premium tax credit, and then get people to sign up for marketplace plans for free, but still collect that premium tax credit that you literally set, you’re set to make quite a return on that,” said researcher Coleman Drake, an assistant professor at Pitt’s Graduate School of Public Health.

That year, state regulators in Pennsylvania and elsewhere directed insurance companies on the exchange to structure premiums so as to maximize the amount of federal subsidies to individuals. This was done to help stabilize the market for vendors and consumers after the Trump Administration cut cost saving reduction payments to insurance companies.

Cost saving reduction payments were designed to help insurers pay for low-cost plans that companies on the exchange are legally obliagated to sell to people who make less than 250 percent of the federal poverty level. Even though the Trump Administation ended cost saving reduction payments, the insurers still had to provide these inexpensive plans.

Because insurers were allowed to structuce premium prices to counteract the Trump Administration’s decision to cut cost saving reduction payments, and thereby drive up individual subsidies, venders gained significant leverage in setting advantageous rates for themselves. That is espeically true in areas where the exchange is a monopoly.

The monopoly effect hasn’t disappeared and it hasn’t benefited all people buying health insurance on the ACA marketplace. Customers who don’t qualify for government aid can end up paying a lot more for health insurance.

The cutoff for an individual subsidy is up to 400 percent of the federal poverty level. In 2019, that’s $48,560 a year for a household of one. So while exchange monopolies seem to generally work out for insurers, they don’t benefit consumers who make more than the cutoff.

“Many times they are worse off because of the fact that insurers had to increase premiums,” said Jean Abraham, a health policy research at the University of Minnesota and Coleman’s collaborator. “So it exacerbated an affordability crisis for those who make more than 400 percent of poverty.”

As a note of disclosure, WESA receives funding from the University of Pittsburgh.